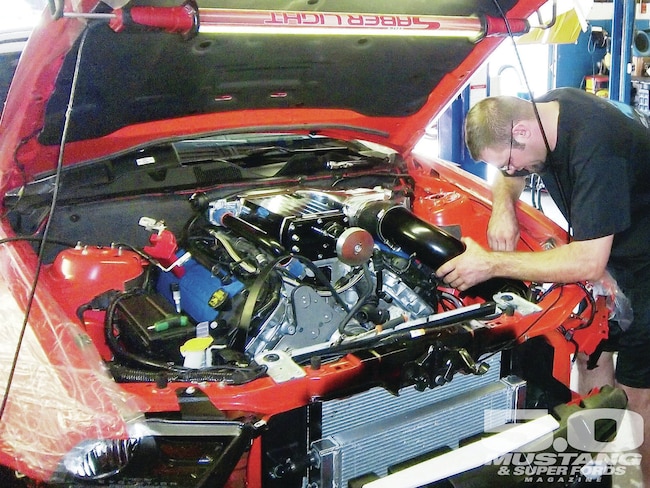 There's no doubt we've been on an incredible roll of sorts, with a steady stream of '11-'12 Mustang tech articles here in 5.0 Mustang & Super Fords. While our aggressive pursuit of the latest hotness is in part credited to this magazine's title, we admit the experiments we're doing-especially those that involve increasing Coyote engines' horsepower output-can almost be likened to an addiction.

Some opportunities, such as cover exposes of both the Coyote 5.0 engine (Mar. '10) and its even-badder little brother, the '12 Boss 302's RoadRunner (Aug. '11), have come about thanks to good timing and the perfect alignment of the proverbial stars; others were made possible with the help of Mustang performance shops around the country.

For the sake of science (and marketing), shops have invested time and funds in exploring the performance potential of the newest Pony and its engine, progressing through the upgrade spectrum with a variety of bolt-on parts and improvement systems. Nelson Whitlock, Fred Cook, and their team at Evolution Performance are an ambitious Mustang-performance business. They're always ready (and willing) to try something new-especially if it's cutting edge and ultimately results in a stock 5.0 making unbelievable steam.

While we're of the attitude that no late-model 'Stang is so hallowed that it shouldn't be modified (case-in-point, upgraded '93 Cobras, Big Steve's PVT, and KJ's T-top coupe), we do acknowledge there are some enthusiasts who believe specialty cars should be left alone. However, we were presented with a chance to be the first Mustang magazine to have a go at supercharging a '12 Boss 302 Pony (number 127 of 4,000 cars being made), and as you'll see when you read this report, we really mean it when we say no 'Stang is "that sacred."

That's right-with the help of the teams at Evolution Performance and Kenne Bell, our latest effort involves implementing forced induction on the high-profile bad boy in Ford's 5.0 Mustang lineup. In this case, Kenne Bell's 2.8 Twin Screw is the air inducer of record, and Andy Caufield's bone-stock Boss is the testbed.

If you're saying to yourself, You guys have already tested the KB, yes, we have evaluated what the Mammoth can do on a stock Coyote. Contributor Tom Wilson worked with and reported on the unit for our May '11 issue ("Coyote vs. Condor"), and at 15 psi, the liquid-cooled Kenne helped churn 710 peak horsepower and 553 lb-ft of rear-wheel torque on an otherwise-untouched 5.0 Pony. Since RoadRunner 5.0s pack a lot more punch than their GT brethren, we're anxious to see what happens once the strong wind of a 2.8 Kenne starts blowing through its cylinders.

While the intake-manifold change in this effort is obvious, bolting the Mammoth twin-screw supercharger on a Boss 302 involves working around some of the blower system's installation instructions, as they were written for GTs long before our idea for this particular stunt came about. This being the case, we turned to Evo top wrench Chuck Wrzesniewski and calibration ace Jon Lund to put all the pieces in place and pour on the coals come dyno time.

It's time to get on with our feature presentation, which includes photo highlights of the install and the all-important rundown of our test Boss's rear-wheel performance on the Mustang chassis dyno at Evolution Performance.

Horse Sense: While being present when a Coyote 5.0 engine wails at 7,000 rpm during a dyno session is exhilarating, listening to a Boss version sing at high revs is something that can only be described as something that is truly out of this world. Video clips from this landmark project are on our website (www.50mustangandsuperfords.com). Click on one, then close your eyes and enjoy the experience. 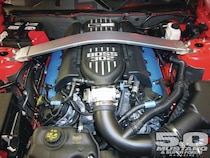 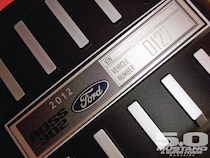 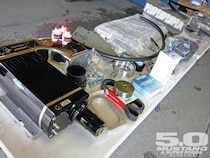 Our dyno session with the Kenne Bell 2.8 Mammoth installed on Andy Caufield's '12 Boss 302 ultimately proved more of a challenge than any of us expected. However, ace tuner Jon Lund (www.lundracing.com) battled and eventually defeated an imbedded command that forced the throttle shut just as the blower was hitting its sweet spot on several runs.

As the results show, the big KB is no joke whatsoever on the Boss 302. Once tuned (we used VP Racing Fuels' C-16 blend), the blower easily makes killer power across the entire 2,500 to 7,000-rpm rangeùwith either pulley installed. Interestingly, peak torque from the twin-screw-blown Boss is reached at approximately 6,000-6,200 rpm, roughly 1,000 revs past the peak for Coyote 5.0s equipped with the same supercharger. We attribute this difference to the Boss engine's superior breathing and Jon's ability to manipulate the valve events specifically for exhaust.

Yes, we did fall just shy of making 800 hp at the rear wheels. However, if you're thinking 785 hp is "it" for this combination, you're horribly mistaken. What we learned in this exercise is that the '11-'12 5.0 Mustang's mechanical-returnless fuel system understandably has a limit. A lack of fuel at the higher side of the rpm range ultimately led us to stop just shy of eight-hundie, as there was no way to compensate for dangerously lean air/fuel ratios.

Bolting a Kenne Bell blower on a stock Boss 302 instantly gives the specialty 'Stang even more street cred than the Pony has in its original trim. On the street, stock rubber doesn't have a prayer in First, Second or Third gears. However, once the tires actually do grab, acceleration is furious and the speedo is well beyond 100 mph in seconds.