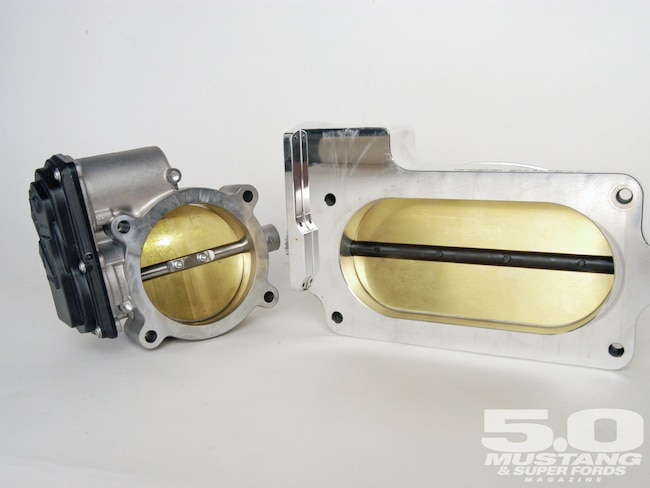 We're all hot rodders here, so let's ignore that a new 5.0-liter Mustang with a Kenne Bell blower already has the capacity to fry the tires at will. There is always a "need" for more.

In this case, the literal choke on the Kenne Bell party has been the stock throttle body. This is no surprise as the Kenne Bell blower kits for the new 5.0 engine all feature the company's aptly named Mammoth air inlet. Large enough to swallow a housecat, the Mammoth intake effectively eliminates intake restriction. Thus, the stock throttle body--a mere 80mm in diameter--can't fully sate even the standard Kenne Bell 2.8 blower's appetite, much less efficiently feed a 2.8H pullied for track action.

So, Kenne Bell has done the logical thing, developing a monstrous 168mm throttle body as an optional upgrade to its blower kits. This correctly sizes the new throttle body to the Mammoth intake found standard on all Kenne Bell 5.0 kits and so it's no surprise the new throttle body proved more efficient in its first magazine test. At $799, it's one of those big parts that a casual guy could do without for awhile, then add down the road as he steps up his program. Of course, according to our test, he'll have to be content with a mere 591 rwhp compared to the 637 rwhp he could have with the KB throttle body, but then, life just isn't fair.

Kenne Bell's supercharger kits for the '11-'12 Mustangs center on the 2.8 and 2.8H twin-screw blowers. Regular readers will recall the 2.8 blower is optimized for 8-15 pounds of boost, while the 2.8H does best from 15 pounds on up. Until now only the stock throttle body was available, and as the photos show, it is entirely overwhelmed by the huge Kenne Bell Mammoth air inlet.

As the dyno tests illustrate, the stock throttle body is a bit of a choke in the entry-level 8- to 9-psi range, albeit not a catastrophe at such easy-going boost levels. But, as expected, at higher boost and power the greater the stock throttle body lags. So, the more power you make the better the Kenne Bell throttle body pays off. It's tough to draw a line and say that above such-and-such boost you must have the big KB throttle body. To a great extent this depends on how you're using the blower. Street fans could wait a little--the track-oriented customer is more likely to want all he can get right away.

The situation is pleasantly complicated by the easy Kenne Bell blower pulley changes. Using inexpensive pulleys and tools, it's a 4-minute snap to swap KB pulleys. In practical terms, that means easy 8 to 12 pounds of boost on the street, then swapping the pulleys and moving up to race gas and something like 18 pounds of boost for some rowdy track action. Reversing the process puts the car back in still-powerful street trim for the drive home.

In the end, it's up to you. Just starting out with a standard 2.8 Kenne Bell kit for your pride and joy street 5.0? You'll be happy with a big pulley and the stock throttle body for a good long while. Buying a 2.8H kit for track action? Better factor in the cost of the big throttle body. In between you'll have to make the call depending on your hunger for power and fiscal leverage. 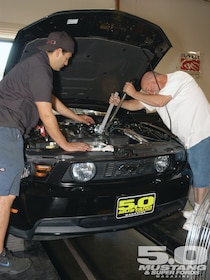 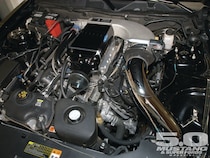 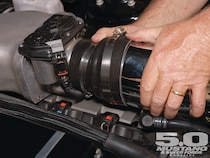 It may be that Kenne Bell's new throttle body is the largest production Ford throttle body ever. At 168mm along its major axis, it's a monster all right. Conceptually it's a pair of 80mm throttle bodies(!) with the center cut out, according to Kenne Bell's main man Jim Bell, so think of it as twice as large as Ford's 80mm Coyote mouthpiece. Jim says the unit flows 2,150 cfm by itself, and 2,350 cfm if you put a flared entrance on it. That's 1,500hp territory, so if you can't make power, it isn't the throttle body's fault.

The main trick with huge throttle bodies is making them driveable, especially near idle. This is simple physics due to the tremendous perimeter area of the big throttle blade. Barely crack it open and you have too much air, making the throttle touchy to the driver and impossibly responsive for the engine management computer to use for idle control.

Well, impossibly responsive until you dampen the engine with retarded ignition timing, says Jim. Once that was figured out, the barn door of a throttle body was ready to idle placidly at stock rpm. We did not drive Frank's car, but Frank and Kenne Bell techs say it's smooth as stock.

Jim Bell reports the throttle body is in stock and shipping now. The $799 includes the throttle body, adapter plate to bolt it to the Mammoth intake, and a Hypertech handheld programmer with the necessary tune.

To demonstrate the new throttle body Kenne Bell set up a simple test at nearby GTR Performance. Frank Lanzas black GT was once again strapped to the rollers--Frank's car prototyped the Kenne Bell manual-transmission 5.0 kit--and the stock and Kenne Bell throttle bodies were run. Additionally, we tried three different blower pulleys to show how the power gain increases with growing power.

There were no problems or unexpected delays. Swapping the throttle bodies and pulleys was straightforward, and the only other work was downloading the necessary tunes for the stock or KB throttle bodies as necessary. (There's no way the big KB throttle body will operate with the same tune as the stocker.) Downloading is done in the usual Kenne Bell fashion, with a Hypertech handheld.

Details of the results are in the nearby sidebars, but suffice it to say the new throttle body supports power into the 600hp range with laughable ease. More boost and power are coming with a smaller crank pulley/harmonic damper combination and a reinforced oil pump, but that's a story for another time.

Horse Sense: Normally Kenne Bell would have hosted this test on its in-house Dynojet, but it was tied up with another long-term project. Luckily GTR is just around the corner from Kenne Bell and has its own Dynojet, hence the neighborly visit.

With Ford supplying near-race engines to the showroom floor and aftermarket specialists such as Kenne Bell delivering well-engineered blower packages, it's getting ridiculously easy to dial in nearly any power level desired. Furthermore, there's no need to split hairs in this throttle body test. Each step shows a clear step up the power ladder, the curves not changing shape but simply getting steeper in response to increased cylinder pressure.

Occasionally listing just the peak numbers gives a surprising clear big-picture look at a test. This is one such time, as the peak rear wheel horsepower numbers show:

It's especially clear from the synopsis that the large throttle body pays off increasingly large dividends as the power level goes up.

For the record, the test car was nearly stock save for the Kenne Bell equipment. Specifically, stock headers and catalytic converters were used; a Pypes after-cat kit gives it a muscular tone but likely didn't materially affect the results. A Kenne Bell Boost-a-Pump aids delivery of pump gas, doped to about 100 octane with canned octane boosters; and the ignition remains stock. 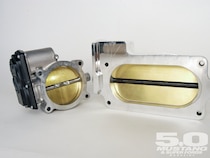 Along with their other innovations, Coyote engines use new electronics in their throttle bodies. Previously Ford throttle bodies employed a carbon resistive wiper to generate the throttle position signal. This is a contact system where a metal wiper sweeps across a carbon plate, and like all mechanical systems, it is prone to wear and occasional failure.

Coyote throttle bodies replace the contact system with a solid-state magnetic sensor to track throttle blade position. A magnet is fixed to the end of the throttle shaft while a proximity sensor embedded on a small circuit board mounted close by the throttle armùbut not touchingùsenses the magnet's flux field to generate the necessary position signal used by the engine management computer. Except for the rotating throttle shaft, there are no moving parts, and with no contact, the system should easily last the engine's lifetime.

One consideration is the shaft and its magnet must be both the correct distance from and in the correct orientation to the proximity sensor. This is done during throttle-body manufacturing, so you don't have to worry about it. So, while the throttle body works differently, swapping the stock Coyote throttle body electronics into Kenne Bell's 168mm unit follows almost the same procedure as before.

In general, the stock throttle body cover is removed, along with an idler gear and small electric motor. The motor and gear slip in the KB throttle body, and the stock Ford cover is screwed on. The only details are setting the backlash in the gears, which is easily done using a tiny gauge as shown in the photos, and installing the required Kenne Bell tuning using a Hypertech handheld programmer.