Thanks to ProCharger, you can beat a V-8 with a super six 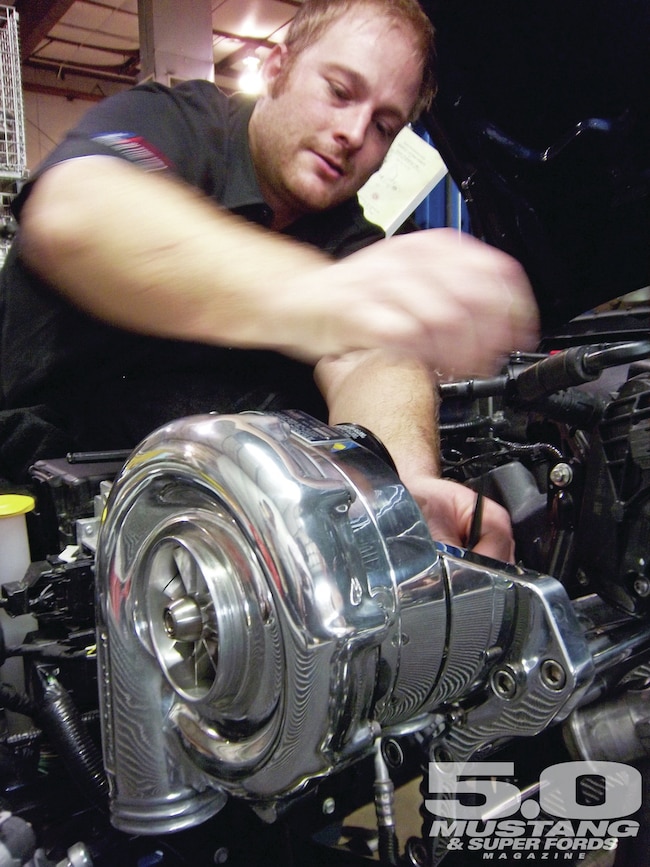 As rabid fans of Mustang performance, we're always glad to hear about new products designed and produced for one reason--well, maybe two reasons. Naturally, aftermarket manufacturers invest their time and resources into making new 'Stang gear to help make our Ponies run absolutely wild. However, most companies' second objective--especially as our economy continues to slowly improve--is to offer compelling upgrades at prices that cash-conscious Mustang enthusiasts can afford.

While performance concepts for V-8--powered 'Stangs are pretty much everywhere, hop-up bits for their six-cylinder siblings haven't been nearly as abundant throughout recent late-model Mustang platforms. Over the years, a grossly imbalanced cost-to-performance ratio has limited the overall feasibility of applying turbochargers and superchargers to the sixers. Heretofore, their internal structure was not conducive to supporting the boost necessary for the affordable power gains that performance-junkies like us want and appreciate.

That doesn't mean using turbos and blowers has been impossible. We've seen plenty of '94-'04 V-6 'Stangs with such systems, and Tech Editor KJ Jones even reviewed a centrifugal supercharger setup for V-6 S197s shortly after the 4.0-liter cars debuted in 2005. However, as a whole, cold-air systems, after-cat exhausts, nitrous oxide, and tuning have proven the more cost-friendly ingredients for coaxing more horsepower from the '94-'04 190hp, 3.8-liter and the '05-'10 210hp, 4.0-liter.

While the '11 Mustang GT and its Coyote 5.0-liter engine have been all the rage for more than a year, things are also quite good now for six-cylinder Ponies. So good, in fact, it's now actually OK to say performance when talking about the '11 V-6 powerplant. Performance is an applicable term for today's V-6 Mustang engine mainly because despite its 3.7-liter displacement, Ford's all-new Twin Independent Variable Cam Timing helps the small-but-mighty bullet put out more horsepower and torque (305 hp/280 lb-ft at the crankshaft) than the Three-Valve 4.6 engines we raved about just a short time ago.

As we've learned with the Three-Valve 'Stang, forced induction does make a whale of an improvement over the baseline, bone-stock rear-wheel horsepower of the V-8 cars, which is typically in the 268hp range. So our interest really peaked when we received word that ProCharger is taking the first shot at boosting the dynamic new six-poppers with a P-1SC-based, intercooled supercharger setup for '11-'12 'Stangs. When you take into account attrition through drivetrain (six-speed manual), the new six-banger theoretically throws down baseline power that's not too far below that of its older V-8 brother. Our mission is to verify this thought, and confirm our other theory--that the addition of a supercharger will turn the new V-6 Mustang into a cool low-buck boulevard beast.

This pursuit of power sent your tech editor to ProCharger's headquarters in Olathe, Kansas, where Calibration Engineer Nick Schmidt gave us an exclusive first-look and dyno-evaluation of the company's '11-'12 Mustang V-6 supercharger system. It features a slick dedicated six-rib-drive setup that's good for 8 pounds of boost. The results from our baseline and post-installation dyno runs speak volumes about the bang-for-buck improvement ProCharger's blower makes on 3.7- powered Mustangs. Read on and see what we're talking about.

We hit ProCharger's in-house Mustang Dynamometer chassis dyno pretty hard before and after installing ProCharger's intercooled blower system on Glenn Cope's '11 V-6 Mustang. As most of you know, exploring new technology for V-8-powered 'Stangs is our usual beat, so our plan was to take full advantage of having the chance to see for ourselves what the new six-cylinder engine is all about. 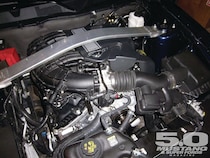 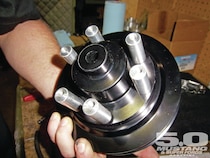 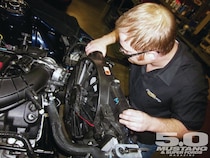 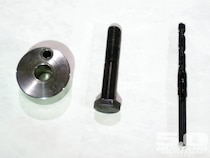 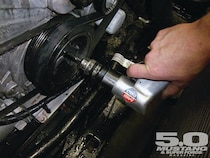 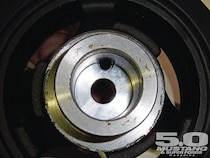 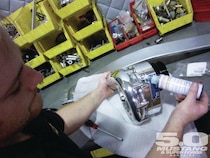 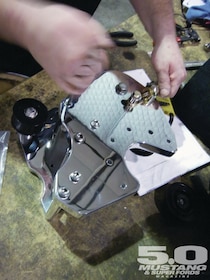 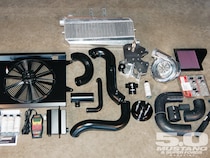 With fuel-economy stats of 30 mpg, the only thing you can call Ford's new 3.7-liter bullet is impressive, especially after watching the powerplant throw down roughly 260 naturally aspirated horsepower at the feet of a new 'Stang. Take a second to put this in perspectiveùthis tiny engine rocks harder at the crank or wheels than any bone-stock pushrod 5.0-liter, and even better at the feet than any of the factory Two-Valve, 4.6-liter V-8 engines that powered Mustang GTs from 1996 to 2004. Seriously, the crank horsepower of this new six-banger (305 hp) is on-par with that of '03-'04 Mach 1sùand the cost to have it is considerably less!

As the dyno results show, adding the intercooled P-1SC and ProCharger's custom calibration makes an instant and big difference in the 3.7 power and torque sweeps. We followed the dyno session with a few miles of cruising with the 415hp setup installed (open-air filter and calibration), which put a stamp of confirmation on this deal. The supercharger's helical-cut gears are deceptively quiet, and low-speed driveability remains smooth and stock-like. Upstairs is another story, as boost starts doing its thing right around 3,500 rpm and continues straight up to 6,500 rpm, which allows a 3.31-geared, six-speed V-6 Pony to sprint up to 130 mph with ease.

Add a set of 3.73s to this package, and there's really only one piece of advice we can offer those who believe a V-8 'Stang is the only way to go: Don't be fooled, son! For the saved cash that comes with buying a '11 V-6 Mustang (price, fuel economy, lower insurance rate), throwing five Gs at it for stealth performance like this is a true bargain.