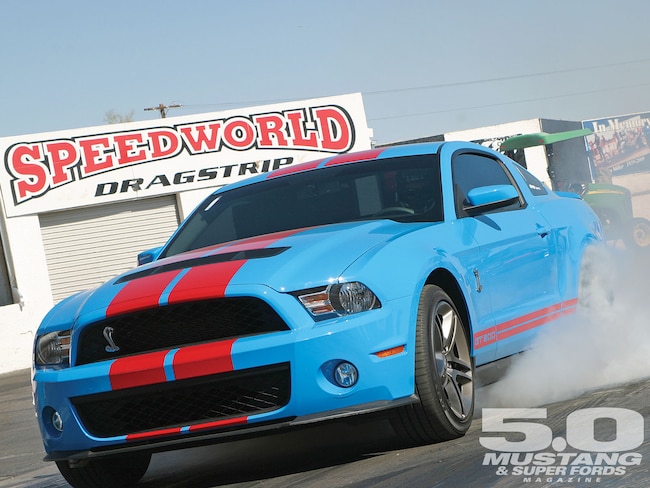 While the Mustang hobby has many, many facets, there are two sides that enthusiasts seem to be drawn to more than any of the others. The "show" side of our deal places emphasis on appearance. 'Stang owners hell-bent on having the baddest-looking Ponies on the planet. They often go to great lengths making the latest cosmetic changes-hot paint colors, trick graphics, slammed suspensions, and ultra-blingin' wheels. The other major component of hard-core 'Stangbangin', of course, is putting more go in the '86-'11 EFI cars that so many of us own and dig. As far as your power-mad, 5.0 Mustang & Super Fords tech editor is concerned, the more steam a 'Stang makes, the better!

As many of you are well aware, Shelby GT500s arrived on the Mustang scene in 2007 with a huge horsepower advantage over their S197 brethren. That advantage was no accident, either. The steam came courtesy of an Eaton-supercharged, 5.4-liter engine that set 500 horses off and running. Yes, Shelbys arrived and quickly became the answer to power-mad Mustang enthusiasts' prayers. True to our passion for making 'Stangs better, we didn't waste any time trying to find ways to improve GT500 performance.

In our research, we found that basic bolt-on parts such as blower pulleys, cold-air-induction, exhaust pieces, and PCM calibrations easily carried GT500 rear-wheel horsepower past the 500 mark (using premium pump fuel), which certainly is impressive, considering the relatively low cost of parts and labor to get it done. Taking power to the next level requires making a move to harder-core replacements such as the larger superchargers or turbos.

While we've gone through all of 'em and have seen first-hand that the blowers and turbos all are serious players in the big-steam arena. We also know that making a move to one of the next-level power adders carries a pretty stout price tag. So, with that in mind, we decided to investigate the effect that good-old nitrous oxide has on a GT500. In our opinion, "juice" is the original late-model-Mustang power adder, and without question, it's the least-expensive choice of the trio we refer to as "The Big Three."

The nitrous-plus-boost concept isn't new at all, and it's the type of upgrade that can be made with a good set of hand tools being the only requirement. Over the years we've seen how the gas can be used as an extra 'adder, and also for primary or secondary intercooling with blower and turbocharger systems (nitrous oxide also is used to quicken the spool speed of race turbos).

Since we know how wild nitrous makes factory-blown, DOHC 4.6 engines in street-driven '03-'04 Cobras, we're confident adding spray to the Terminator's big brother will reap similar good results. Our mission with this exercise is to find out how good, by installing a Zex High Output Nitrous System (PN 82242; $639.99) on Aaron Aldridge's fresh '10 Shelby GT500. We selected the Zex unit for its simplicity and 100-250hp adjustability. That puts its range on par with the aforementioned boost upgrades that do wonders on stock and modified engines in '07-'10 Shelbys.

As you'll see in the accompanying photos, the bolt-on and dyno tasks were put in the more-than-capable hands of Chris Ciolek and Jesse Allen of AMP Performance in Phoenix, Arizona. As an added performance treat, our friends in the desert also arranged for us to shoot juice at the GT500, in quarter-mile blasts at Speedworld drag strip, in nearby Wittman. 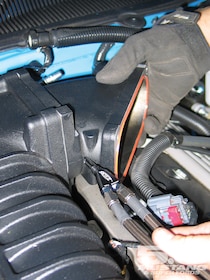 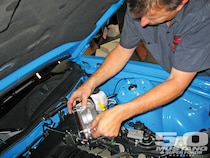 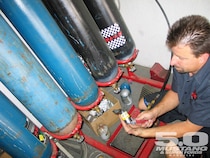 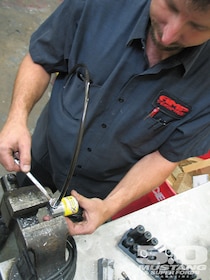 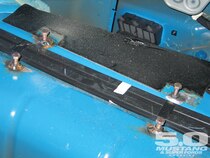 On The Dragstrip
A shout-out of props definitely goes out to Tom Thompson, owner of AMP Performance, for arranging a private test session at Speedworld Dragstrip in Wittman, Arizona, for our nitrous-sprayed Shelby GT500 and several of AMP's customers.

Knowing that it would be futile to attempt using the 150-horsepower shot with stock radial tires, Chris reinstalled the 100-horse pills and attempted to achieve a "best pass" without making any suspension, weight, or other changes to the Mustang. As you probably imagine, managing 600 horsepower and almost 700 lb-ft of rear-wheel torque on stock rubber is quite a challenge. But Chris did a masterful, consistent job of launching smoothly and staying ahead of the point where the rear tires broke loose.

A copy of the Shelby's best e.t. and mph on nitrous is included. Aaron plans to invest in a pair of sticky drag radials, and make a few suspension changes soon. Those upgrades, coupled with Zex's High Output Nitrous System definitely will make for some quick trips down the strip!

On The Dyno
Our dyno testing for this project consisted of baseline runs, and then blasting Aaron Aldridge's '10 Shelby GT500 on the rollers of AMP's Dynojet after the Zex High Output Nitrous System was installed. Starting with jetting for 100 hp (52 nitrous/30 fuel) and with timing retarded 4 degrees, we were rewarded right away with a gain of a solid 100 ponies at the feet, and an immediate and huge torque increase, which is absolutely insane when you consider the 100 shot doesn't require any custom tuning beyond the timing change, and tests were done using 91-octane pump gas.

With the Shelby being so comfortable with the first-level setting, we attempted to step things up by swapping in a 64 (nitrous) pill and 35 jet for fuel, which creates a 150-horse injection. (Zex calls for a 36 jet, but we somehow misplaced ours and so pulled the smaller pill from a cache of miscellaneous nitrous hardware.)

While we're sure both horsepower and torque again will increase considerably with a 150 shot, our big gain came on the torque side only. "Using that 35 instead of a 36 for fuel may have something to do with the lack of horsepower increase, but I also think that timing can remain at 4 degrees retarded with the 150 shot," says Chris.

"Zex's recommended timing changes are understandably on the conservative side. I retarded timing 6 degrees for the bigger hit, but I think it would've showed more power if the adjustment had not been made. Air/fuel is plenty safe with this system's 150-horse setting, so I know there's a lot more power that can be made with this Shelby using the nitrous system's bigger shots, with higher-octane fuel and more timing."