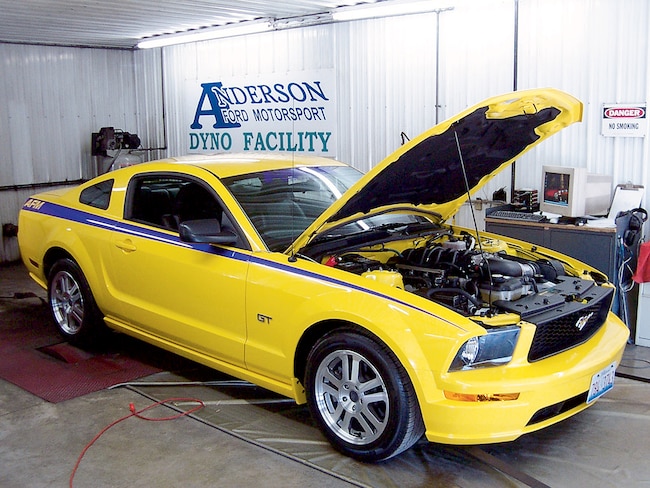 Horse Sense:
In the spirit of Mister Norm's (a Mopar performance outlet of Grand Spaulding Dodge of Chicago) and Royal Pontiac in Motown (another dealer-based hi-po unit of the musclecar '60s) Anderson Ford Motorsport is the mold from which many of today's Ford dealers' performance teams are made. AFM, anchored by Anderson Ford Mercury in Clinton, Illinois, is one of the leaders in Mustang-specific performance products and over the years has supported several racers in NMRA's Real Street, Drag Radial, EFI Renegade, and Pure Street classes. AFM's horsepower concept remains the same with regard to the '05 Mustang Power Pipe AFM's horsepower concept remains the same for the '05 Mustang Power Pipe

The theory that cold air makes horsepower is one of the first laws of high performance when it comes to modifying a car. Unfortunately, sometimes this "law" is grossly misunderstood by Mustang enthusiasts who think that installing the latest whiz-bang cold-air kit on their Mustang will instantly add 50 hp at the turn of the key. That's not the case-not by a long shot.

A cooler higher-volume/higher-velocity intake charge (cold air/ram air) certainly will help an engine make more torque and more high-rpm horsepower (under-hood ambient air temperature is usually high, the air is not as dense, and stock air-intake systems are usually restrictive), but again, making horsepower with a "cold air" intake is not just an instant fix.

When it comes to improving intake air volume, quality, and flow for 5.0- and 4.6L engines, Anderson Ford Motorsport's Power Pipe has been regarded as one of the best induction setups available for a 'Stang. AFM's lead-man, Rick Anderson, is considered a trendsetter for his trademarked invention. Over the years, Rick and his crew at AFM have been at the forefront of Mustang performance product development and, more importantly, incorporating dyno tests on those products as a major part of their process. We knew that it would only be a matter of time before we got word that an '05 version of the Power Pipe kit ($569) was available, as AFM (along with dozens of other aftermarket companies) seems to be in a race, of sorts, to perfect the latest parts and equipment for the hot, new 'Stangs.

AFM's horsepower concept remains the same for the '05 Mustang Power Pipe. The high-revving Three-Valve engine requires a lot of air in order to work efficiently, and the stock inlet tube is too restrictive (as was the case with the inlets for 5.0 and Two-Valve 4.6 Mustangs). However, AFM doesn't rely on a cooler intake charge alone for power and torque increases. Delivery of that air charge is key. By dyno-testing the new Power Pipe on the shop's '05 GT mule, AFM was able to use the data to design a tube that utilized a large amount of cool air.

AFM's '05 Power Pipe kit, a bolt-in replacement for the factory airbox, consists of a 4 11/42-inch (diameter) rubber throttle-body elbow that reduces to a fully coated 4-inch tube. The pipe and a rubber connecting tube pass through an aluminum heat shield, which isolates a Professional Mass Air Systems 80mm mass air sensor (sensors can be calibrated for injectors ranging from stock, 19 lb/hr to 30 lb/hr), ACT sensor and harness, and a conical air filter. Together, this package was good for 15 additional horsepower and a torque improvement of 13.5 lb-ft at the rear wheels. The gains were achieved without using a PMS tuner or other aftermarket calibrating equipment for the Spanish Oak processor-a procedure that is common for most cold-air kits-and a tuner or custom chip is not necessary until you go beyond 30 lb/hr injectors. The Power Pipe is a bolt-on-and-go deal.

"We don't make fluff," Rick Anderson said, regarding his decision to go forward with a Power Pipe for '05 Mustangs. "Our products have to prove to us that they're worth making, and we get that proof through our extensive dyno testing during development."

AFM's new Power Pipe required roughly an hour to install and produced very impressive power and torque gains. That sounds like a plan to us.

Turning Pro Our beloved Pro-M is back! Well, sort of. Professional Mass Air Systems, of Lansing, Michigan, is the new manufacturer of the larger mass air meters (and recalibrated air meters) that for years have been among the staples of bolt-on performance upgrades for all fuel-injected mass air Mustangs.

In March, Best Products, makers of the tried-and-true Pro-M mass air meter used by many Mustang racers, closed its doors and immediately created a frenzy throughout the Mustang world, as customers' product orders and recalibrations were left in limbo.

We're happy to report that the people behind Professional Mass Air Systems are many of the same programmers/production personnel that made the Pro-M such a huge success, and their goal is to provide both the quality air meters that they're known for and many exciting new products for fuel-injected vehicles.