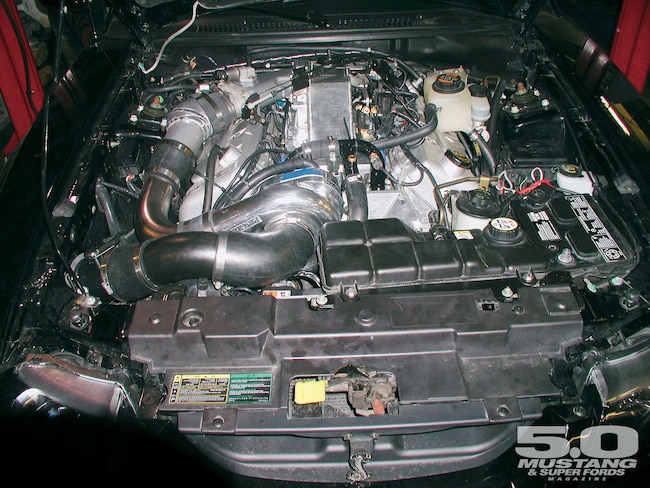 Horse Sense: Though we knew our little Real Street class might become a testbed for racing technology to transfer to the street market, we didn't know it would be quite this direct. The P-1SC2 supercharger raced by the likes of Justin Burcham and Tim Matherly is the same self-contained blower packaged in ATI's Stage I '03-'04 Cobra kit. Better yet, it's good for 600-plus-horsepower at the wheels in a completely streetable car.

Modified '03 and '04 Cobras are the rage. Add a chip, a pulley, a cold-air kit, and an exhaust, and these cars will make power we had only dreamed of from such mild modifications. The bottom line is, Ford really outdid itself with these cars. They are hot rods right from the factory, and they're ripe for the modding in the hands of power-hungry enthusiasts. If you're tired of reading about them, it's probably because-like us-you don't own one. And, you think it's all been written by now, so we should be on to the next thing.

Well, the next thing-the '05 Mustang-isn't here yet, and by the looks of what we've seen from ATI-ProCharger, we haven't read the last story about big-power Cobras. But wait a minute. These Cobras already have superchargers, and the really power-crazed are replacing them with screw blowers. So, why are we writing about ATI? If you checked out our SEMA coverage in the April issue ("Truckload Scale," p. 82), you no doubt saw that ATI had debuted its centrifugal conversion kit for '03-'04 Cobras. We'd heard of it before then, and we've been chasing the story for months. So determined were we, that we convinced ATI to let us inside some of its testing on the Stage I kits as well as on a sneak preview of the insane Stage II kit-but more on that later.

When we first heard the Cobras were to have factory superchargers, we assumed it would take a bite out of the companies that do brisk centrifugal business turning '96-'01 Cobras into blown terrors. So why would ATI-ProCharger create a centrifugal conversion kit for a car with a Roots-style blower? It's fairly simple, really. ATI's Dan Jones says the main reason is the car's purpose-built blower motor. Installing a supercharger on an engine built for one is a far more attractive proposition than making one work on a naturally aspirated engine with high compression and light-duty pistons. Additionally, the company saw it as a way to allow the market to directly compare its self-contained centrifugal blowers with the likewise self-contained Roots-style and screw blowers. And it certainly didn't hurt that customers were asking to buy such kits.

Though ATI had kits that would bolt to the Four-Valve 4.6 from its '99-'01 Cobra and Mach 1 kits, the real challenge was adapting an upper intake to replace the factory Roots-style blower, as ATI wanted to take advantage of the factory air-to-water intercooler. Beginning in the summer of 2003, several prototype intakes were built, with the main challenge to achieve adequate airflow while making the part relatively easy to manufacture. Along the way, ATI consulted with Ford engineers to learn just what these engines like, which apparently is plenty of boost-as long as you keep the rpm under 6,500 or so when the cams run out.

Along with determining how to install the blower on the car, it was important to choose the right head unit for the kit. ATI is never shy about creating a blower for a specific application, but after doing some blower mapping, the company determined that its P-1SC2 blower-spec'd for the Real Street class-fit the bill, as it is a potent torque producer, which follows along with the intent of these cars.

At the beginning of the project, ATI set goals to build a blower kit that would utilize a six-rib belt, so it could be warranted for a year. Additionally, ATI wanted to keep the price of the Stage I kit under $4,000 and produce horsepower in the mid- to high-500hp range. In the end, the Stage I kit has a manufacturer's suggested retail of $3,995, and ATI's testing on a mildly modified '03 Cobra resulted in nearly 600 hp at the wheels. Now you know why the company went to the trouble of building a blower kit for a blower car. By the time you read this, the Stage II '03-'04 kit should be ready, and ATI is shooting for mid-700 hp! With that kind of power on tap, you better install a rollcage before you install the new blower.

So 600 hp isn't enough for you? You want 700-plus from your street Cobra? Well, you want ATI's Stage II kit for '03-'04 Cobras. This system includes sequential intercooling, a new blower, a unique beltdrive system, and the capability to reliably produce 25 pounds of boost. This kit was still in the early development stages as we wrote this story, but it is said to have a never-before-seen dual beltdrive system to allow for slip-free boost beyond the 25-psi range, as well as including the brand-new F-1A supercharger designed specifically for this application.

The F-1A was described by ATI's Dan Jones as a small version of the F-3M monster that Don Walsh Jr. cleaned house with in Pro 5.0 last year. It features the same compound-bearing transmission and self-contained oiling system as the big blower, but it's obviously smaller and features a unique impeller suited to the Cobra. Other than the size, the major difference is the radical 5.73:1 step-up ratio, which will spool up boost in a hurry, while actually quieting the blower-rather than rattling, it whirrs because the transmission is spinning so briskly.

Of course, the factory air-to-water intercooler was never meant to cool the kind of boost put out by the F-1A, so ATI is adding two sequential air-to-air intercoolers in front of the factory 'cooler. These two 6x9x4.5-inch sheetmetal intercoolers are installed behind the Cobra's foglight openings and together are said to be as efficient as ATI's big three-core sheetmetal intercooler. With the three intercoolers in sequence, the system reportedly operates with efficiencies in the mid-90-percent range, and its efficacy is said to improve as ambient temperatures increase. Dan Jones says that in this configuration, the factory cooler makes a difference only during hot weather.

The Stage II kit will also include 72-lb/hr injectors and the necessary tuning, and it should have an MSRP in the mid-$5,000 range. For those who want to ditch the pump gas for race gas, the F-1A will be about a $700 option for the Stage I kit.

Though the test on Joe Johnston's car shows how the Stage I kit compares to a revved-up Eaton supercharger, we were also privy to the testing of another solid-axle-equipped '03 Cobra at Apten Performance in St. Louis, Missouri. As you know from reading 5.0&SF, Apten is known for its ported Eaton superchargers. This series of testing shows the progression from stock, to bolt-ons and a ported Eaton, to an out-of-the-box Stage I ProCharger kit with the addition of Focus fuel pumps. The final test is the addition of the smaller 3.2-inch pulley and 55-lb/hr injectors to keep up with the increased boost. The result of these mods is the car nearly doubles its rear-wheel horsepower and picks up almost 200 lb-ft of torque at the wheels.

One of the first Cobras to receive the ATI centrifugal conversion is Joe Johnston's Sonic Blue beauty. It was the car on display at the SEMA show. This car had lofty goals from the start, and it didn't stay stock long. It received a small pulley on the Eaton blower, a full Bassani Xhaust system with high-flow cats, a Spec Stage III clutch, and a solid 8.8 rear with 33-spline axles and 3.55 gears. The suspension was likewise tweaked for straight-ahead action at the hands of TRZ Motorsports. Up front, TRZ installed a full brace of UPR gear-tubular K-member, A-arms, and caster/camber plates-along with the company's own Hypercoil coilover conversion using QA1 struts. Out back, Tommy Z of TRZ added a coilover conversion, Strange double-adjustable shocks, and a TRZ antiroll bar. Several more mods are planned when Joe steps up to the Stage II kit, but this was the configuration tested during the above dyno pulls performed on the Dynojet at MC Racing in Overland Park, Kansas. You can see that even with less peak boost, the Stage I ProCharger really wakes up the latest Cobras. 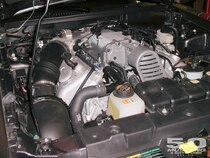 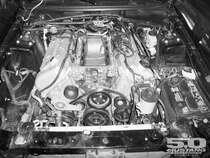 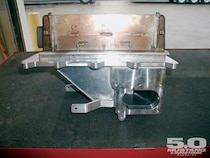 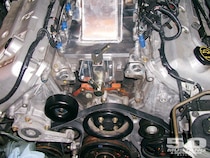 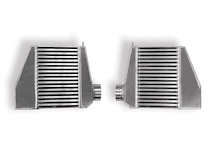 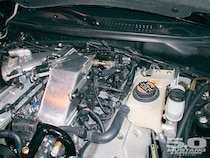 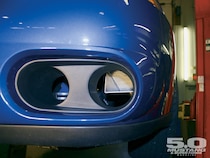 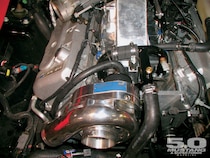 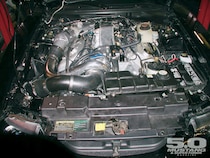 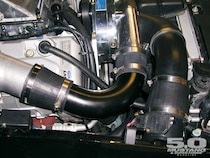 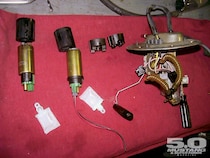 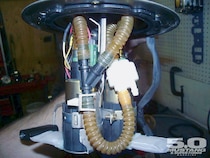