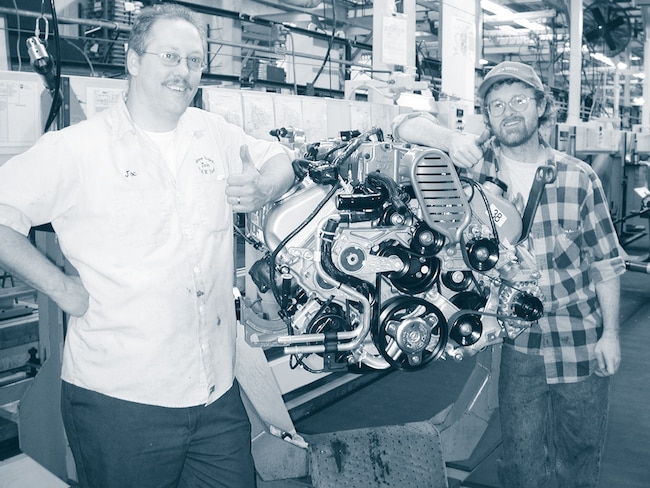 It was originally constructed in the '60s to build farm tractors, and it did so until the late '80s. But since 1990, Ford's Romeo, Michigan, engine plant has been the sole assembly point of all 4.6 modular engines used in both car and truck applications (the larger-displacement 5.4 is built in Windsor, Ontario). Today, this thoroughly modernized, two-million-square-foot complex typically cranks out about 2,400 modular V-8s per day off its high-volume line, an extremely automated engine-assembly line characterized by multitudes of robots and surprisingly few personnel. Alongside is a likewise-automated, low-volume line that churns out numerous 4.6 variants-such as those for the new Marauder-at only a slightly reduced rate.

Hiding in the midst of this mechanized maze of computer-controlled automation is a relatively tiny, 150-foot-long niche line on which a dedicated group of 40 "assembly associates" are now busy handbuilding the 390hp supercharged DOHC modulars destined for installation in the '03 Cobra. In stark contrast to the mechanized lines, the Terminator niche line can produce an absolute maximum of just 70 engines per day in a single shift that runs between 5:00 a.m. and 3:30 p.m. and currently operates six days a week.

It's no secret that all Four-Valve Cobra engines have been built on this niche line ever since model-year 1996. But the necessary bottom-end strengthening for the new blown Cobra means the '03 engines are even more hand-assembled than ever. On the previous naturally aspirated engines, the niche line's starting point was a complete short-block, assembled to that point on an automated line in another section of the plant. For the beefy Terminator, however, the guys on the niche line start with a bare machined cast-iron block and build it up just as you or I would in our garage-only better, since the niche line is equipped with some nifty tools and test equipment that ease the job and make it far more consistent.

Even the process itself differs from what we normally associate with a typical assembly line, where one worker might bolt on parts A and B before the line shifts to another worker who might then add parts C and D, and so on. Instead, on the Terminator line, each engine is built literally from the block up by a single pair of assembly associates who follow it right through to completion, put it through a sophisticated battery of tests, and only then affix to its passenger-side cam cover an aluminum tag stamped with their own signatures, declaring it to be "Hand Built With Pride." Sure, this all adds to the Cobra's marketing hype, but at the end of the day, it's kind of nice to know your engine was built by real guys such as Joe Cleland and Mark Schuman-who put together engine serial number 951612 under the watchful digital eye of our cameras-instead of by Robotic Assembly Device Number R2D2. 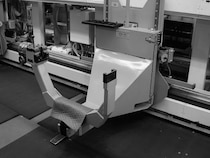 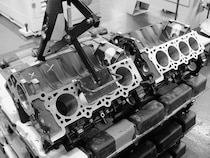 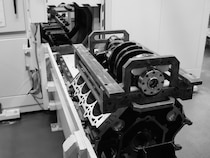 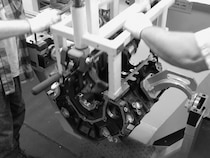 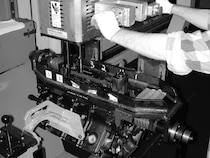 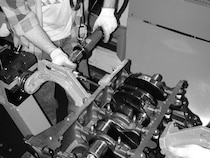