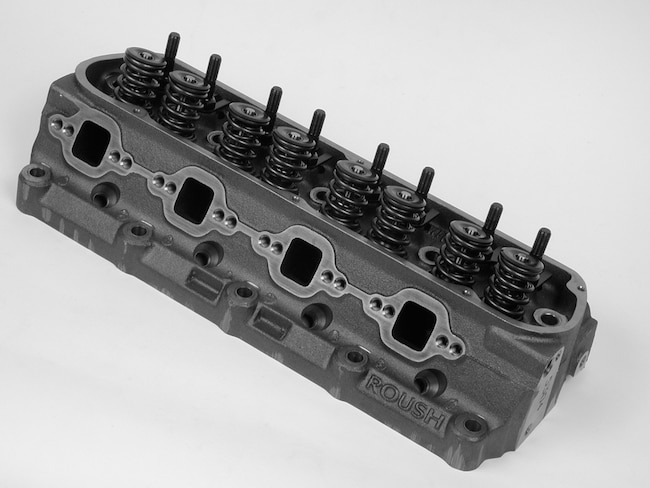 Horse Sense:
In an age when electronic computing power doubles every 18 months, 10 years seems like an awfully long time. Still, if you were toying with Fords 10 or more years ago, the current proliferation of small-block Ford cylinder heads seems epidemic.

This would seem the dawn of signature-series Ford cylinder heads. Billy Glidden moved first, partnering in late 2001 with none other than giant Edelbrock to tweak its all-out Victor racing head. Now Jack Roush has cast the five letters of his last name into this version of World Castings' large-port, cast-iron, high-performance street head to give us the Roush 200.

This entry into the cylinder-head market is just a wave of the green flag for industry giant Roush. Beginning with this 200cc-intake-port version of World Product's Windsor head, Roush Performance Products is planning a larger aftermarket presence. Look for a 180cc version of the Windsor Jr. head shortly, along with corresponding aluminum castings and an entire 347R crate engine wearing these same heads. There may even be a second crate engine after the 347R. But for now, the engine hardware follows an already successful foray into signature-car building-Roush Mustangs and F-150s being especially popular in the Southeast and Midwest for several years now.

The first parts we were able to obtain from Roush in this new venture are the 200 heads shown here. Logically measuring 200 cc in the intake port (up 3 cc from standard Windsor by WC), these heads are built on the long-standing Windsor by World Castings architecture. In fact, Roush representatives say their organization has "touched a few spots" on the World Castings starting point, but the reworking was "minor." Other research indicates light port straight-ening and valvetrain adjustments. We sense Roush was mainly interested in quality control and durability rather than huge power increases over what World Castings has been offering. After a career of documenting too many slipshod aftermarket offerings, we welcome, and have come to expect, such attention from the high-achieving Roush organization.

Since this is a cast-iron head, afforda-bility is expected and delivered. Summit Racing offers the 200 heads-sold assembled-at $397.50 apiece, so think of them as $800 a pair. That's the same as the standard Windsor price, and definitely affordable at $400 less than the least-expensive aluminum heads. You can find GT-40P iron heads for a bit less, but they don't offer the power potential of the Roush head.

Our Roush contacts said inquiries about the heads portability had surfaced. Their answer was that out of the box, the Roush 200 heads would outperform corresponding World Castings heads, but both heads would port the same. Therefore, once hand-massaged there would be no difference.

For us, the question was a bit aca-demic, as we were only able to run the heads as-is before deadlines crept in. Our out-of-the-box flow and dyno testing showed the heads ran as expected, essentially identical to GT-40X or Windsor heads. On our 392ci test engine (a Ford Racing Performance Parts crate piece), the heads peaked at 465 hp and 469 lb-ft of torque, for example (see Roush 200 vs. Ford GT-40X sidebar for details). Roush offered other benchmarks from its own testing. On a mild 302 with 9:1 compression, a B303 cam, 1 7/8-inch headers, and a Performer RPM Air-Gap intake with 750 carb, the number was 366 hp at 6,000 rpm. Roush said this is a gain of 94 hp over the 272 hp made by stock heads on the same engine.

On Roush's 347R stroker test mule with the new iron heads, the story was 9.5:1 compression, and a peak of 435 hp and 415 lb-ft of torque with the same intake and carb. Both 302 and 347 figures fall into the expected 1.2 hp/ cubic-inch range from warmed-up, naturally aspirated street engines, and both are a notch better than the 1.1 hp/ cubic inch we obtained on our 392 test engine.

Before getting to power output, you'll notice a few characteristics of the Roush 200 heads, starting from the instant the UPS man hands them to you. These pups are heavy. We didn't get a chance to weigh the Roush castings this time around, but from previous testing we know World Castings' Windsors are a couple ticks over 50 pounds apiece (iron GT-40s are 44 pounds; the aluminums are 22 pounds). Of course, the extra weight doesn't help either at the dragstrip or when cornering, but that cast-iron beef has also endowed the Windsors by World Castings with a well-deserved reputation for longevity. "Superchargers," "detonation," and "head gaskets" are a few of the key words to free-associate with these heads' thick fire deck and iron rigidity. A little extra weight is not necessarily all bad.

As with many aftermarket builders, Roush does not finish the air-injection paths into the exhaust ports, so those will take some drilling to activate for emissions compliance on street engines. Ditto for the heat riser, a condition best changed with a 6x1/4-inch bit after disassembling the cylinder head. After drilling, you can then attach the 50-state CARB E.O. D-343 sticker next to your car's emission sticker.

So, just when you thought there couldn't be one more small-block cylinder head, there is. Affordable, powerful, and well-built too.

The Dyno Tale
For flow and dyno tests, we obtained a pair of Roush 200 heads directly from Roush Performance Products. All testing was performed at our usual West Coast venue, Westech, using Superflow equipment.

Wanting to draw plenty of air through these "351-sized" heads for our dyno test, we specified an FRRP 392 stroker crate engine. Configured with its stock Comp 282HR hydraulic roller cam, 4-into-1 Hooker Super Competition headers with 31/44-inch primaries and 3-inch collectors, large Flowmaster mufflers hanging 18 inches downstream of the headers, an FRPP single-plane intake (a renamed Edelbrock Victor Jr.), and a Speed Demon 750-cfm carburetor, the basic engine was ready to rumble as loudly as the Roush 200 heads wanted to play.

Recently freshened with new rings and bearings, the 392 fired immediately. After verifying the ignition timing and idle mixture, the stroker was given a modest break-in period at light load to seat the rings. Finally, a brief static rpm test confirmed the fuel mixture was nearly spot on, and then we were on to testing.

Starting with a hair rich mixture of 12.3:1 and a rather generous 36 degrees of ignition lead, we worked our way through a series of jet changes and timing adjustments. Our first tweak was the jets, moving from an 86/92 baseline down to leaner 84/90 jets for a couple of horsepower and 12.5:1 air/fuel mixture that was stable across the powerband. Note: These are Demon carburetor jet sizes, which are identical to Holley practice, if that helps your tuning database.

Next we pulled the timing back to 34 degrees for a gain of 4 hp and 4 lb-ft of torque. Thinking moving down to 32 degrees of timing would make no difference, we nudged the distributor anyway and made a pull. There was no gain at peak horsepower or torque, but down low the torque was up 2 lb-ft, so we called it a success. In a car, 34 degrees may work better due to faster engine acceleration, but that's another test.

At this point, everything was looking happy. We had strings of 92s in the Volumetric Efficiency column, coupled with endless 0.500s under the BSAC (Brake Specific Air Consumption) heading. The BSFC (fuel) numbers started at a low 0.43 and dropped to an even-better 0.41 at 4,100 rpm, then rose to a still-good 0.46 to 0.47 at peak power. In all, a "tolerable" fuel curve, said Westech technician Steve Brule, and we agree. Such efficiency and stability in the fuel curve has not been the norm in our testing throughout the years. Furthermore, there was but 0.5-inch Hg vacuum just starting to show at the top of the tach, indicating the 750-cfm Demon carburetor was well sized to the stroker engine.

Having started close to optimum settings, we concluded the test at this point, even though it felt like a relatively quick job. Our experience with this dyno, along with the predictable response from the engine, assured us we had found peak power. The full power and torque readout shown here is accompanied by the flow chart.

We had a single, unexpected event: A rattling loss of power starting at 5,700 rpm early in the testing. "Valve float, I think," Steve said. A look under the valve covers showed nothing unusual, and the sound or power loss never reoccurred. Roush offers its 200 heads with a choice of three valvesprings, depending on your camshaft. Our heads were wearing 1.440-inch springs, which at 0.600 max lift and 130-pound seat and 320-pound open ratings were just right for our Comp 282HR cam, so the springs were not overstressed. Unable to determine a cause or reproduce the event, we unfortunately had to chalk it up as "unexplained."

Roush 200 vs. Ford GT-40X
Because our test engine was a well-documented FRPP M-6007-A392 crate engine, we were curious to see how the $400 less-expensive iron Roush 200 heads compared to the Ford's usual GT-40X aluminum heads. We thought we might print one of the existing GT-40X dyno sheets so you could compare the two, but we're going to save the space because the Roush 200 and GT-40X dyno printouts are near copies of each other. The only mentionable difference between the two is 5,000-5,500 rpm, where the Roush 200 has a neat 8-10 hp and torque lead over the aluminum heads. Other than that, they are within 2-3 hp of each other.

These dyno results fairly echo the flow charts, although the Roush 200 heads have an approximate 8 percent advantage on the intake side over the GT-40X castings. The exhaust readings are nearly identical, save for the GT-40X being definitely stalled at 0.500-inch valve lift, while the Roush 200s keep on adding flow up to 0.600 inch.

To really know the score, we'd have to do some cam testing to reduce that variable, but at typical, streetable, cam specs, the power edge goes to the Roush 200s, if by just that much.

As Jack Roush will tell you, however, just enough is still enough.