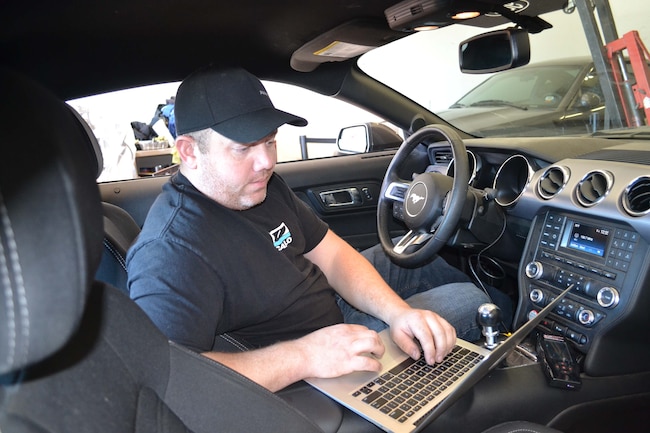 It's become a very interesting world out there if you're a screwdriver and hammer type of guy, as modern vehicles rely less and less on good old-fashioned wrenching, and more and more on computerized tuning. We hear it all the time: that vehicle has a "tune" in it, but what does that mean? Most people rely on word of mouth and reputation when it comes to tuners, and often they are at the mercy of the voodoo magic that the tuners create.

In the recent explorations with our EcoBoost Mustang, we were fortunate enough to run across Steve Ellis from Paramount Speed in Chico, California, who has been knee-deep in tuning a customer's Shelby GT350, a supercharged F-150 pickup, as well as a number of E85-motivated 5.0L Mustangs. He agreed to help us develop an EcoBoost tune that would put the boost back in our EcoBoost, but on California's weak 91-octane fuel instead of race gas.

Establishing a Baseline: A lot more than just boost and timing

When we first approached Ellis for a tuning article, our main though was that we'd be mostly fiddling with the boost and timing curves to gain more power. As it turns out, there's a lot more to it than that. After plugging our SCT programmer into a laptop and datalogging via their computer software, we suddenly were focused on a number of different parameters, including throttle position, cam timing, wastegate percentage, charge-air temperature, rpm, and a number of other engine functions. As it turns out, all this data was able to give us a much clearer view of what the engine was doing and why, as well as uncover some secrets (like it torque-limits like crazy!) Don't think that this is just a Mustang or Ford thing either, a lot of what we're talking about here also pops up in LS-based tuning.

Where there's room for improvement:
By our boost curve in third, we could tell that the computer was pulling back boost in the mid range to limit torque. Our 30-40 mph time was the same as our 70-80 mph time, indicating a virtual linear progression of power. Our tuning plan is to give the engine more boost earlier, especially since it drops down to nearly 4,000 rpm on some shifts. Our eighth-mile run was even more illuminating, as boost would drop to 4 psi after a shift, and take seven-tenths of a second to ramp back up to full power. With three shifts in the quarter-mile, that's roughly 2.1 seconds worth of time the engine spends at 4-16 psi, instead of 20 psi.

Through manipulation of the wastegate, we were able to achieve a basic flatline of 22.4 psi of boost throughout the rpm range right after the throttle was hit. Not only did boost come in earlier (more torque) and carry out further (more usable rpm), it only dropped to 16 psi on a quick 1-2 power-shift. First gear felt a lot stronger with the extra torque, and it dropped our 30 mph to 90 mph 3rd gear time from 7.2 seconds to 6.4 seconds!

What we saw:
Part of the reason EcoBoost Mustangs are so fast (for their engine size) on 91 octane is the crazy boost levels that they run, which means timing has to be appropriate. Too much timing, and the engine will detonate. Too little, and power will be low, and exhaust gas temperatures will increase. The factory 2.3L runs less timing than you might think, at full throttle it's usually around 0 degrees to 1 to 2 degrees retarded.

Where There's Room for Improvement:
We tried a lot of different things with the timing, and honestly, the factory setup worked pretty well with the extra boost. We tried less boost (15 psi) and a lot more timing (10 degrees advanced) and the car was slower. We tried more timing, and the knock sensor pulled us back. At the end of everything, the most we ended up running at wide open was about 1 degree advanced, or just a couple degrees more than stock.

What we saw:
A knock sensor is one of the most important pieces of the computer tuning puzzle. The basic purpose of a knock sensor is to retard timing if there are any signs of pinging or detonation in the engine, which is very important especially with our little four-banger churning out 20 psi of boost from the factory. When we data logged the car on its stock tune, we found something interesting: the knock sensor wasn't doing anything! This explained why we could hear audible pinging (like when we tried SCT's 93 tune on 91) yet the computer wasn't doing anything about it.

Where there's room for improvement:
We turned it on! Ok, well there was a little more to it than that, but changing the knock sensor's strategy from local to global seemed to wake it up. It started pulling timing and adding timing throughout the rpm range, to try to keep the engine in it's sweet spot. When the engine was up on boost and rpm, it seemed to mostly be pulling timing (up to 6 degrees), which led us to think that maybe we needed to back the base timing off a little for 91 octane.

What we saw:
Perhaps the biggest eye opener for us was throttle position. Remember us saying that the EcoBoost engine seemed to bog and fall under the turbo off the line? Well, there was a reason for that! Full throttle was indicated by a throttle angle of 82 degrees, yet off the line we were lucky to get 30 to 50 degrees- definitely not full throttle. We're not quite sure whether the engine was torque managing, protecting the turbo, or both, but in factory form in our 3rd gear roll, we only got actual full throttle from about 5,000 rpm to 5,700 rpm. That's not much of a powerband.

Where there's room for improvement:
While electronic nannies are (arguably) good for the masses, most race car guys want the throttle to be doing what their right foot is doing. For us, this meant making sure that full throttle was actually full throttle when our foot was to the floor, and not for just a little 700-rpm window. After some changes, our throttle position graph actually looked more like a tabletop than a triangle, and we felt a lot better.

What we saw:
When a turbocharger compresses air, it adds quite a bit of heat. For that reason, virtually all modern cars that are boosted have intercoolers for cooling, but also for reliability reasons. Skyrocketing intake temperatures are particularly hard on pistons, and a burned piston isn't exactly an easy repair. Fortunately for us, intake temperatures stayed mellow...well, sort of.

Where there's room for improvement:
Once we turned the boost up and fiddled with the cam timing, our intake charge temperatures (post intercooler) shot straight into the danger zone. Granted it was already 100 degrees out when we tested (inlet air temps started at 129 deg) but under peak boost, temperatures hit 159 degrees, which was not a good number to see. Our tuner indicated that out of everything we saw, he could turn it up more if we got intake air temps under control.

What we saw:
Steve Ellis is a big fan of cam timing, and attributed much of our drivability and power gains to changes in cam timing. From the factory, the EcoBoost engine varies cam timing by more than 40 degrees at certain points, which can really help spool the turbo.

Where there was room for improvement:
Our intake cam timing was similar to the stock version, but somewhat more aggressive on the high end to let in a little more air. The exhaust cam timing on the other hand had a huge area under the curve, which allowed as much air as possible to spin the turbo and exit the exhaust. With older turbos excess backpressure could be an issue, but newer variable geometry turbos (especially wastegated ones) hardly ever have that problem.

What we saw:
We were surprised to learn that especially under power, direct injection engines seem to like a richer air/fuel ratio than their previous counterparts. Most are very efficient engines, but our Mustang went dead rich at wide open throttle in order to keep things safe, and catalyst temps happy. Air/fuel ratio even in stock form hovered around 11:1 under wide open throttle.

Where there was improvement:
The air/fuel ratio is actually something that we didn't fiddle much with. Since everything else on the car is still stock, and since we'd see minimal power gains leaning things out, we kept the air/fuel ratio rich and the boost up!

What we saw:
Provided you have a pretty average air/fuel ratio, overall engine airflow is actually a good way of measuring power. With boosted engines being fairly efficient, about 8 rear wheel horsepower per lb/min of airflow is a fairly good approximation of power.

Where there's room for improvement:
There's a lot of different factors that can affect boost--cam timing and discharge temperature being some of the main ones. So is the engine actually flowing air and making more power? For this we went straight to the source and looked at airflow. After some tweaking, our turbo topped out at 39 lb/min, or about 10 percent more than stock. That means we're roughly 312 rwhp (39 x 8) although we have a feeling that's a tad optimistic. If we had a compressor map (we don't) we could even plot airflow vs pressure ratio to see how close we are to overspeeding the turbo!

If you're a pen-on-paper kind of guy, you probably skipped to the end to see if the car ended up being faster. Long story short, yes it is! Our best eighth-mile pass in stock form was 9.22 at 78 mph, and after six versions of tunes, our Eco went 8.97 at 81 mph in the eighth-mile on 91 octane. The low-end torque was also immensely improved, and we could now spin from a roll in First gear (which is all we wanted anyways). Custom tuning really woke us up to the next bottleneck in our system, which is the intercooler system. With California experiencing unfortunate summer heatwaves where temps can reach 110 degrees or more, our boosted car was especially having a hard time with its factory setup. The aftermarket has told us never to fear however, that they have a solution! Next up, just how much can intercoolers cool?