Making The Most Of Ford's Biggest Block

The 385-series 429/460ci Ford big-block started out as a sleepy, stodgy luxury car fat-block when it was introduced in 1968. It was a whisper-quiet big-block with abundant low-end torque for large sedans, and it did its job well. Ultimately, the 429/460 engine went on to power trucks, vans, and other types of Ford vehicles before production ended in the late '90s. The 429/460ci big-block had nothing in common with the FE and MEL series big-blocks of the era. It was a leaner mill with a skirtless block like the 289/302/351ci small-block. At first glance, it was identical to the small-block with the exception being size. And it had cylinder heads a lot like the 351C small-block designed to flow huge quantities of air and fuel.

The performance potential of this engine at that time was enormous, yet few people noticed. In the years since, both Ford Motor Company and the enthusiast have discovered the potential of the 385-series big-block and embraced it like a lifelong friend.

Ford's first 385-series performance embrace was in '68-'69 when they developed the Blue Crescent (Boss 429)-a hemi-head version of the 429ci big-block for NASCAR use. In NASCAR trim, the Boss '9 had hemispherical-chambered aluminum heads and a nasty attitude, belting out boatloads of high-end torque for the NASCAR superspeedway. It performed very well in the Coke- bottle-bodied Torinos and Cyclones. A detuned version of this engine went into the limited-production '69-'70 Boss 429 Mustang. Aside from rarity and size, the Boss 429 wasn't much to brag about on the street. Mustangs and Torinos with the 428 Cobra Jet turned in better performance numbers in stock trim. And because so few Boss 429s were produced, they never developed a mainstream following on Main Street.

Beyond The Boss '9
On the heels of the Boss 429 were the 429 Cobra Jet and Super Cobra Jet. These wedge-head engines were engineered to make mucho torque in Torinos, Mustangs, and Cyclones in '70-'71. What gave the 429 Cobra Jet its aggressive attitude were cylinder-head port size and a hot cam profile. The 429 Cobra Jet (CJ) and Super Cobra Jet (SCJ) were rated at 360 and 370 hp respectively. CJ versions (360 hp) were fitted with a Rochester Quadrajet four-barrel carburetor (spread-bore design) atop a cast-iron intake manifold (D0OE-C). SCJ versions (370 hp) received a 780-cfm Holley four-barrel carburetor atop a different cast-iron manifold (D0OE-Q) designed for the Holley.

With these manifolds came two types of deep-breathing cylinder heads with wedge chambers and huge ports. You'll want to be aware of the D0OE-R casting because it has 2.19-inch intake and 1.73-inch exhaust valves. Port size is also enormous at 2.51x2.11-inch intake and 2.25x1.30-inch exhaust. Where this casting varies is rocker-arm type. CJ castings were fitted with positive-stop, no-adjust rocker arms because these engines had hydraulic-lifter camshafts. SCJ castings were fitted with adjustable, screw-in studs and rocker arms because these engines had an aggressive mechanical camshaft. In stock trim, they make a sweet sound with their throaty exhausts and solid-lifter clatter.

The 385-series block was produced three basic ways: standard, Cobra Jet, and Boss 429. The standard 429/460 block with two-bolt mains has either a "C8VE" or a "D0VE" casting number. So does the four-bolt main 429 Cobra Jet block. You must remove the oil pan to determine which block you've found. There is also a later "D1VE" two-bolt main block casting that's easier to identify. The nice thing about this block is interchangeability. It can be a 429 or a 460 depending on which crankshaft is used. What's more, it can be stroked to more than 550ci.

The 429 and 460 use the same connecting rod. Standard 429/460 connecting rods have a "C8VE-A" forging number. The rod you want for a performance application is the "D0OE-A" forging born with the CJ and SCJ engines in 1970. Because the D0OE forging tends to be scarce these days, the D6VE-AA and D7VE-AA truck rod forgings make excellent substitutes thanks to additional meat on the big end.

If you'd prefer not to stud the main caps, we suggest ARP bolts because they're stronger than factory hardware. Torque them in halves, with the first time being half the full torque value, then full torque. Then go back and check your work, twice. Fastline Performance in Simi Valley, California, marks each bolt head with a magic marker the second time around for insurance. Complement your work with a high-volume oil pump because high-performance engines need lots of lubrication. Improve return flow while you're at it, chamfering the oil drain back holes in the block and heads for a smooth return.

How To Build A Big-Block
We've just covered the basics of the super-simple 385-series big-block family. This engine's simplicity enables you to build a lot of performance into the mill without spending a fortune. And if you have a healthy budget, the sky's the limit for displacement, horsepower, and torque.

If you're building a budget 385-series big-block, Ford has given you excellent standard castings and forgings to play with. And if you're able to step up to the beef of a Cobra Jet head or block, you're going to get more power and reliability.

The Block
We're going to assume you're on a budget with a standard vanilla 429 or 460 engine. Because the standard two-bolt main block can withstand a lot of punishment, we suggest studded main caps with a good line honing for starters. Both are affordable and money well spent.

Power On Top
When you have a completed short-block, thoughts naturally turn to camshaft, valvetrain, heads, and induction. These components will directly affect the engine's personality. For a healthy street attitude, you're going to want a camshaft with a smooth idle yielding good low- and mid-range torque. High-rpm torque isn't going to benefit you on the street.

Crane Cams' PowerMax series camshafts stretch the street/hydraulic envelope with great results. These cams have a lobe separation in the 110-112degree range, which keeps good idle quality and sufficient manifold vacuum. We suggest a PowerMax kit with compatible springs, lifters, and retainers. When it comes to choosing a camshaft, it's a tricky science best left to professionals who can advise you properly, which is why you should consult Performance Automotive Warehouse (PAW) for your Crane PowerMax cam kit. For street engines, it's wise to keep valve lift conservative in the .450-inch range, which reduces the likelihood of valvetrain failure. The Crane PowerMax CRA-350501 (.456/.487-inch lift), CRA-353901 (.487/.518-inch lift), and CRA-353931 (.487/.504-inch lift) are good street cams with conservative lift and duration. Selection boils down to duration, which is where these cams differ. Duration becomes progressively longer with each type.

Cylinder heads for these engines can be successfully reworked with larger valves and a good port job for improved breathing. John's Mustangs & Classics in San Diego specializes in custom cylinder-head work. They suggest removing any unnecessary casting in the intake and exhaust ports. Because Ford heads struggle with unnecessary parasites primarily in the exhaust ports, you can improve airflow dramatically with a good port job. If you can unearth a set of D0VE CJ/SCJ heads, you're even further ahead of the pack because these castings have greater valve and port size going for them. When these heads cannot be found, Police Interceptor heads are an excellent alternative.

There's a vast array of induction systems available for the 429/460. For the street, you need a dual-plane manifold such as the Weiand Stealth No. 8012 for the 429/460. Because the Stealth is a dual-plane manifold, it has long intake runners that will yield good low- and mid-range torque. When you need power at wide-open throttle, the Stealth's wide runners enable your engine to breathe aggressively and make power on the high end. The Blue Thunder dual-plane manifold from Coast High Performance offers a cleaner look void of graphics with long, wide intake runners designed for the Blue Thunder head.

Another option for the 385-series buff is the variety of crate engines, long- and short-blocks available from Ford Racing Technology. You can order the M-6009-D460 remanufactured short-block and custom-tailor this engine to your own specifications. It offers a .030-inch overbore, hypereutectic 10.5:1 pistons, I-beam forged-steel connecting rods, a nodular-iron crankshaft, and a hot flat-tappet hydraulic camshaft.

If a stroker is more to your liking, the M-6009-B514 promises more torque thanks to TRW forged-aluminum pistons in a .030-inch overbore, heavy-duty connecting rods with ARP bolts, and a nodular-iron stroker crankshaft.

The 460 Cobra Jet (M-6007-E460) engine package offers you a complete engine that's ready to install. We're talking a remanufactured .030-inch overbore block, aluminum Cobra Jet heads, 10.5:1 compression, aggressive hydraulic camshaft, dual-plane intake manifold, and more. You can expect approximately 486 hp at 6,150 rpm. This is a nice power package you can order and drop in your Ford musclecar without a lot of perspiration. 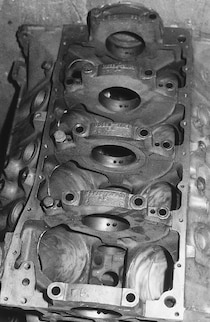 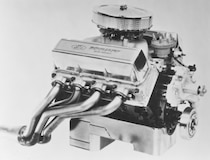