How To Install A Paxton Supercharger

Get More Go With A Huffer 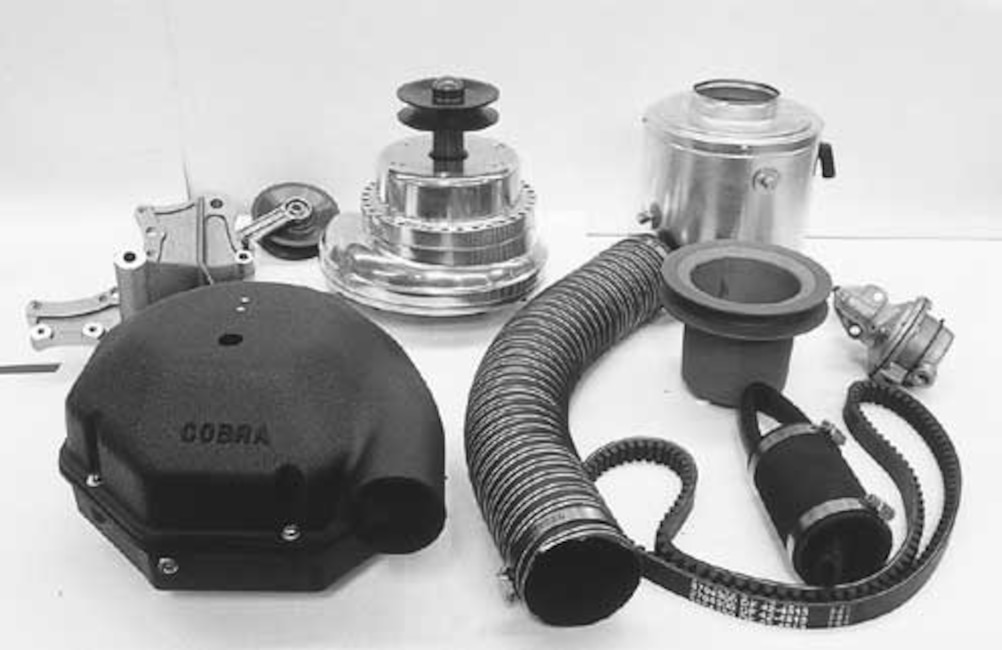 Here are the main components for the Paxton setup. At front left is the airbox that contains the carb. It’s airtight, so boost pressure has nowhere to go except down the carb and into the engine. Behind the airbox is the supercharger, or blower, mounting bracket with its adjustable idler pulley. At the back is the Paxton SN 2000 supercharger (center) and air cleaner canister (right) with its flexible hose to connect to the blower. Also shown is the special crank drive pulley and belt, the short hose to connect the blower to the airbox, and a special fuel pump. 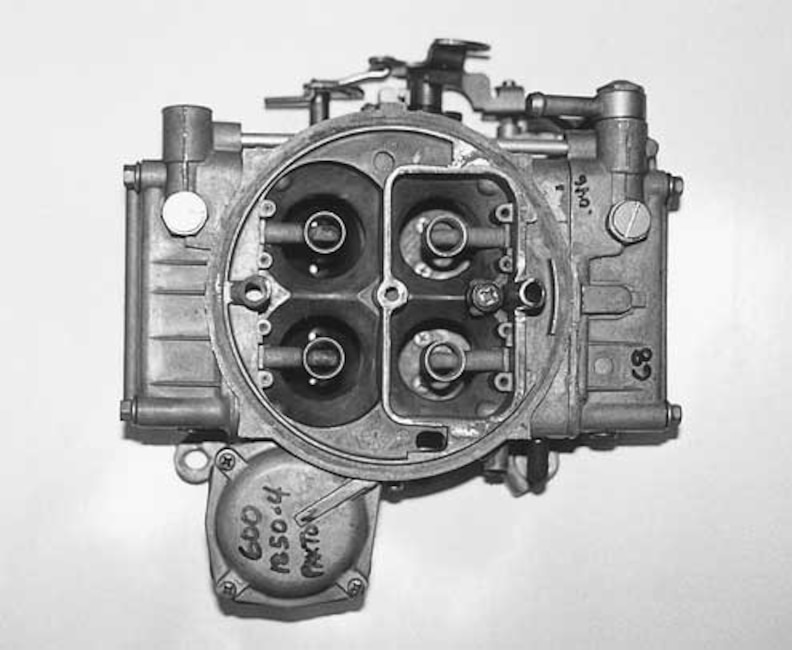 To handle the boost, it’s recommended to install a specially prepared Holley 600-cfm four-barrel with implosion-proof floats as regular floats have a tendency to collapse under boost. We obtained our Holley from Craig Conley of Paradise Wheels. Notice the absence of a choke air horn, which was milled away to minimize flow interference. 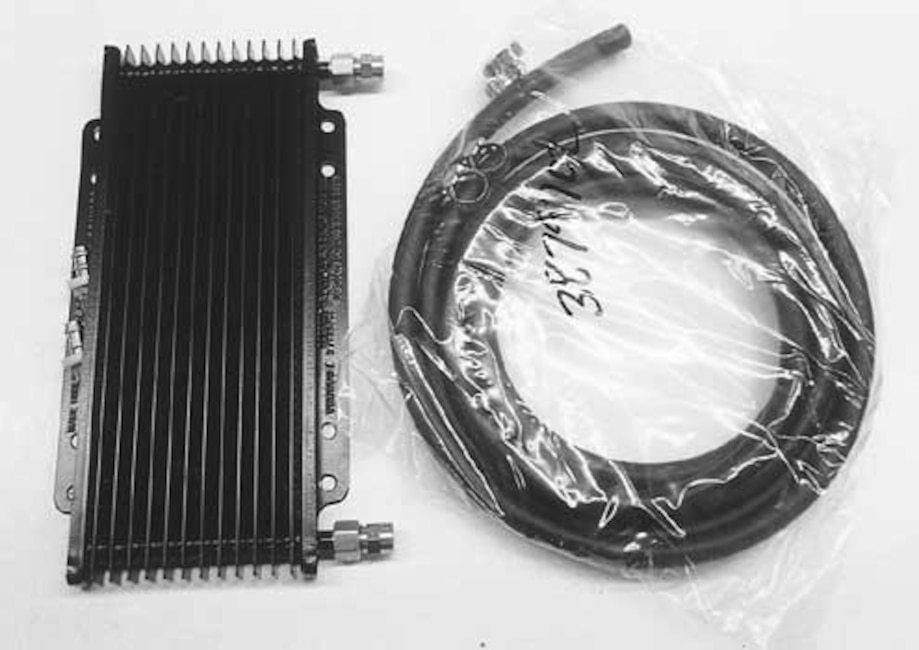 An oil cooler dedicated only to the supercharger is also used. There’s a small electric pump, which we mounted inside the front valance panel in front of the radiator, to circulate the oil. 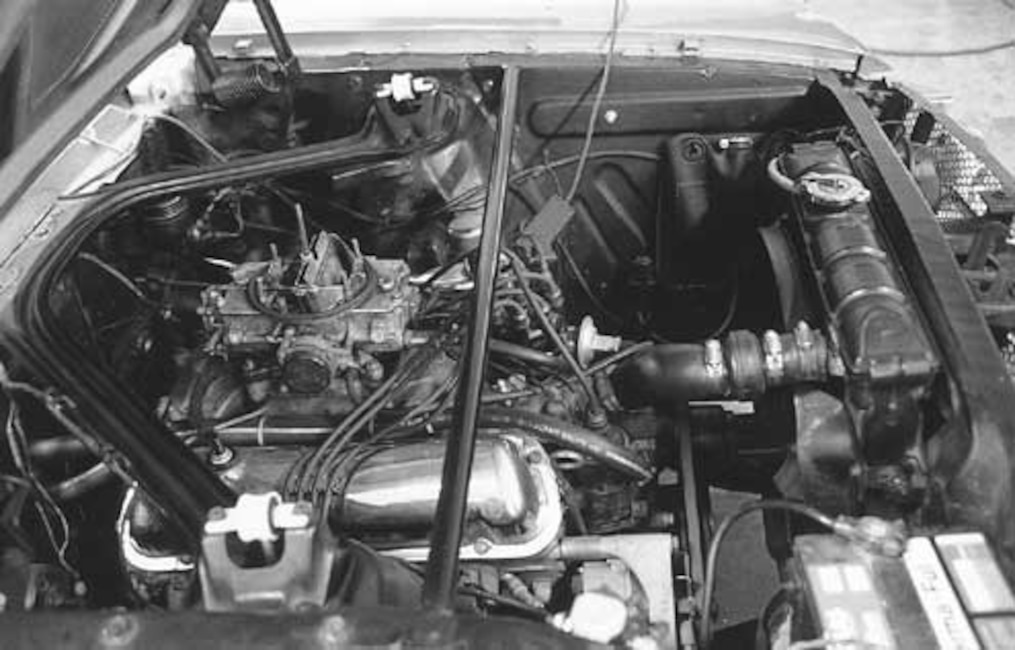 For our Paxton supercharger installation, we started with a bone-stock, A-code 289 in a 1965 Mustang fastback. That’s the original Autolite 4100 series four-barrel carb on top. 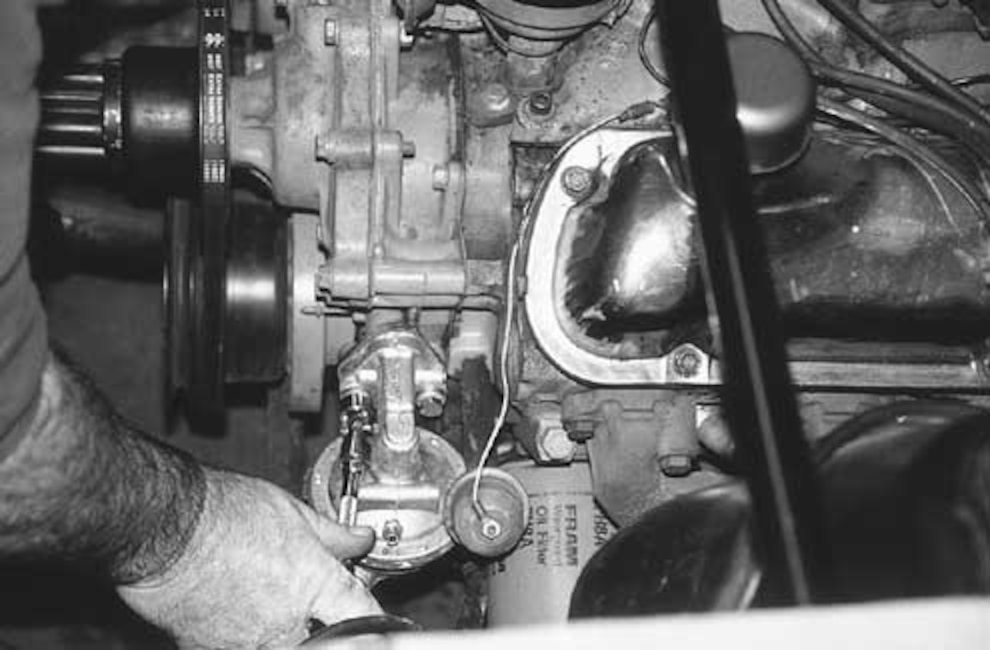 After removing the stock fuel pump, the new Paxton pump was fastened into position. Unlike the factory pump, the Paxton unit has a fitting on top, shown beside the technician’s thumb. A small vacuum hose will connect this fitting to a similar fitting on the blower to allow fuel delivery to be adjusted by blower demand. 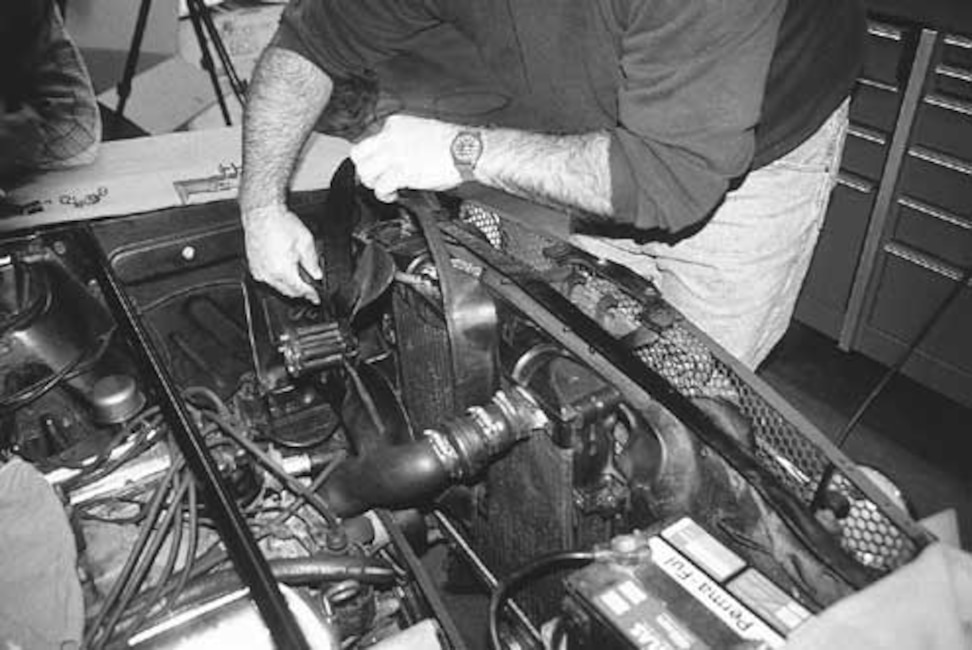 For easy access to the front of the crank for installation of the blower drive pulley, the fan shroud and radiator must be removed. A slightly longer fan spacer will also be installed to allow the fan to clear the new pulley. 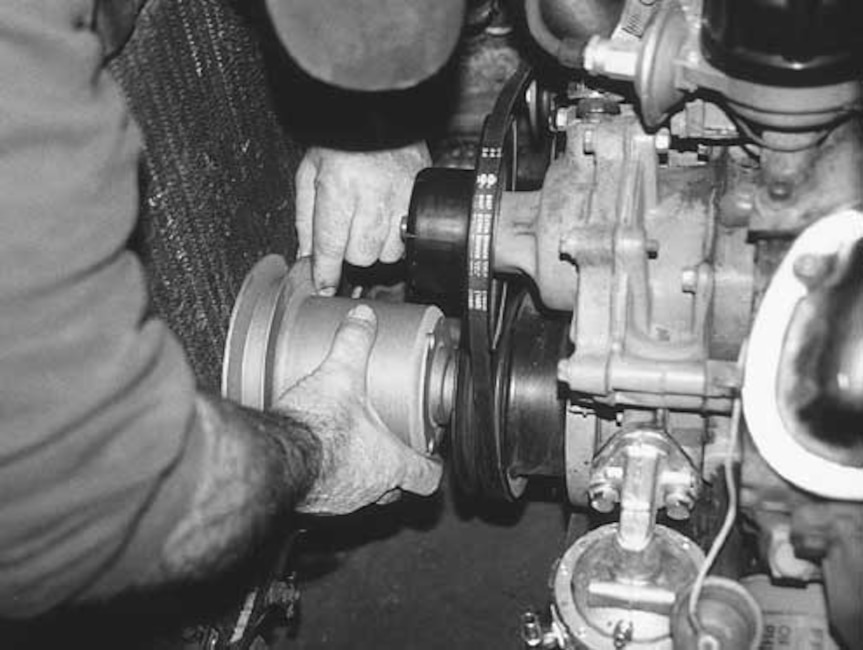 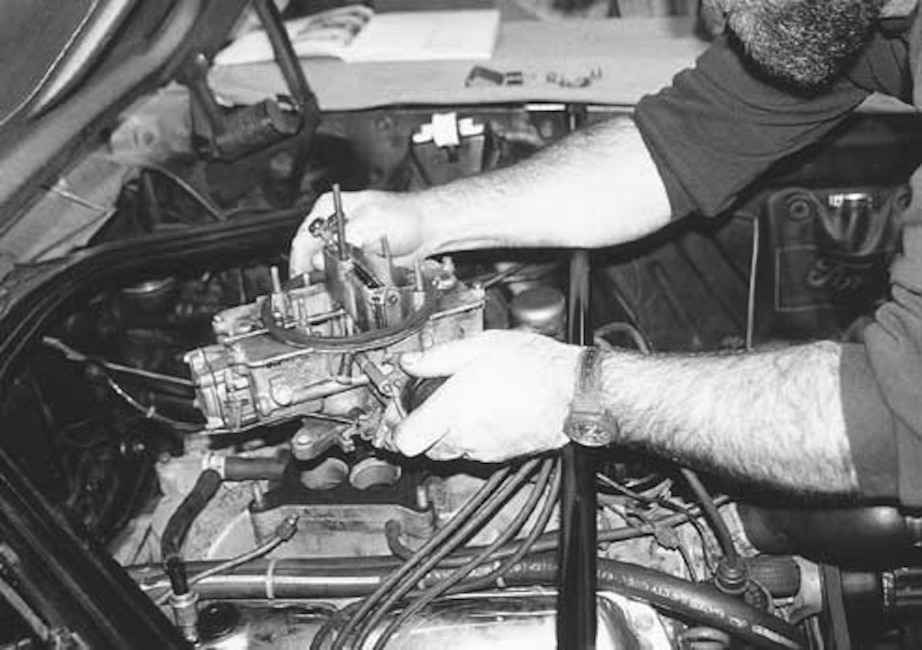 Now is the time to get the old Autolite carb out of the way because it will be replaced with the specially prepared 600-cfm Holley. 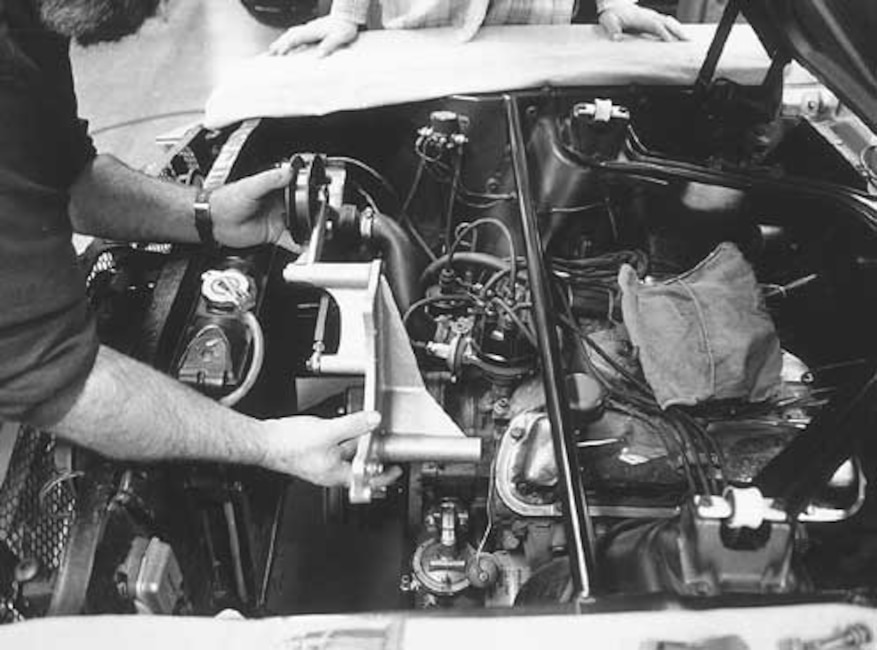 It’s a good idea to test position the blower bracket to see which engine bolts and bolt holes will be utilized. 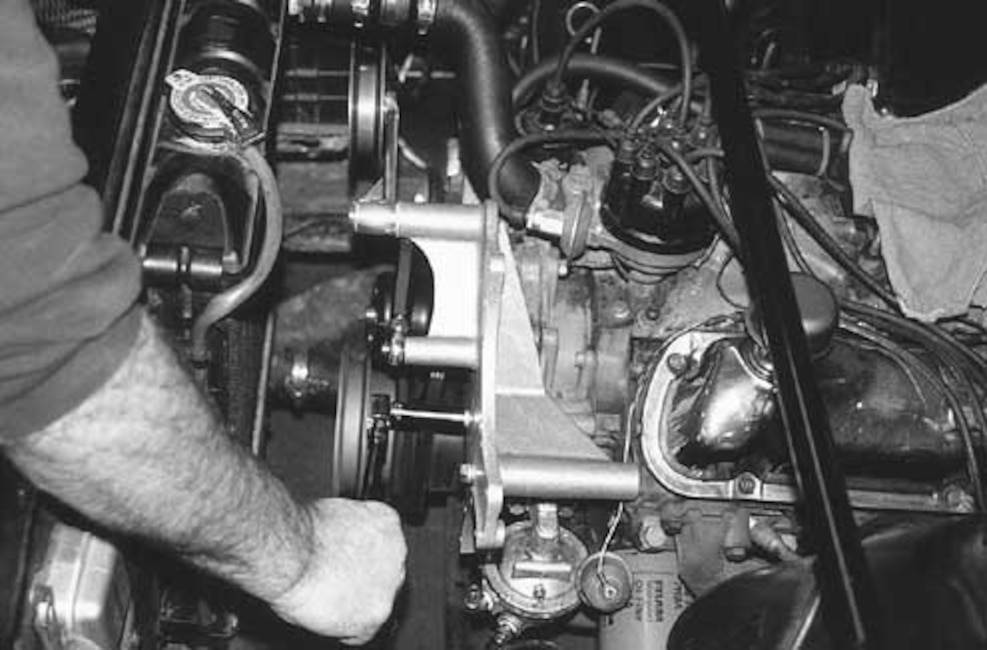 Once the correct mounting method has been determined, the bracket can be installed. 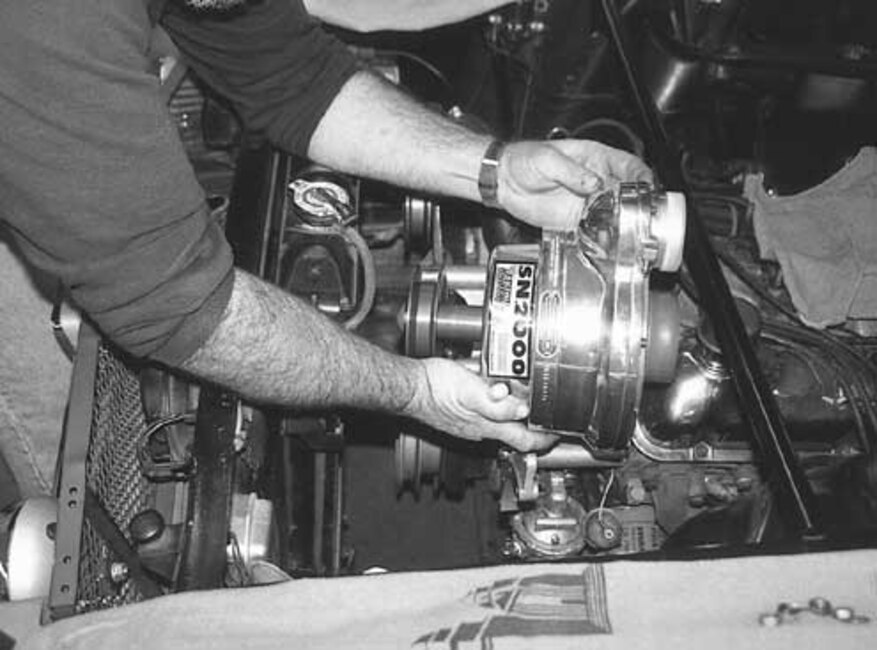 Oops. A trial fit of the supercharger shows that our 1965 Mustang’s aftermarket Monte Carlo bar must be removed. 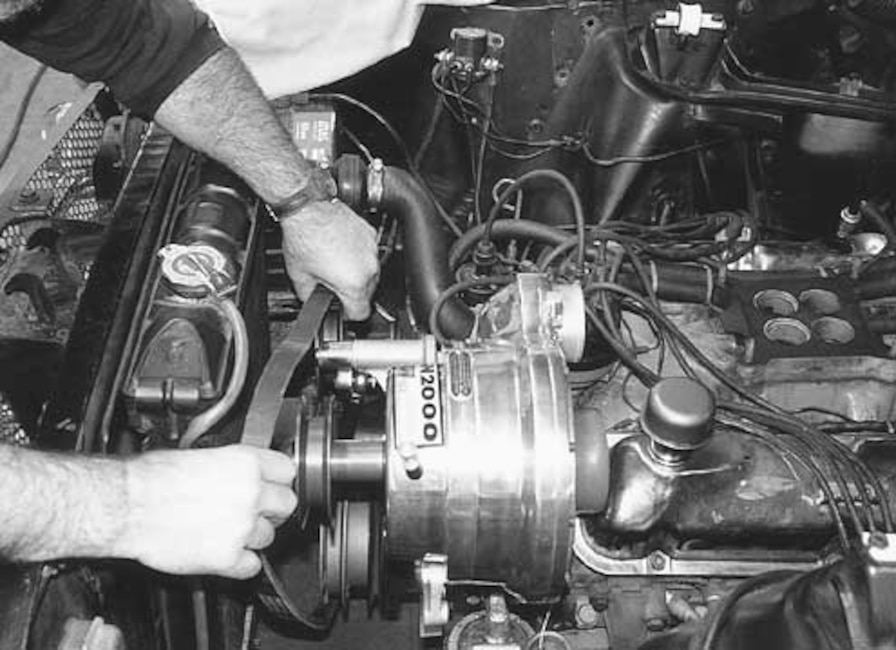 With the Monte Carlo bar out of the way, the Paxton supercharger was bolted into place and the drivebelt installed onto the pulleys. 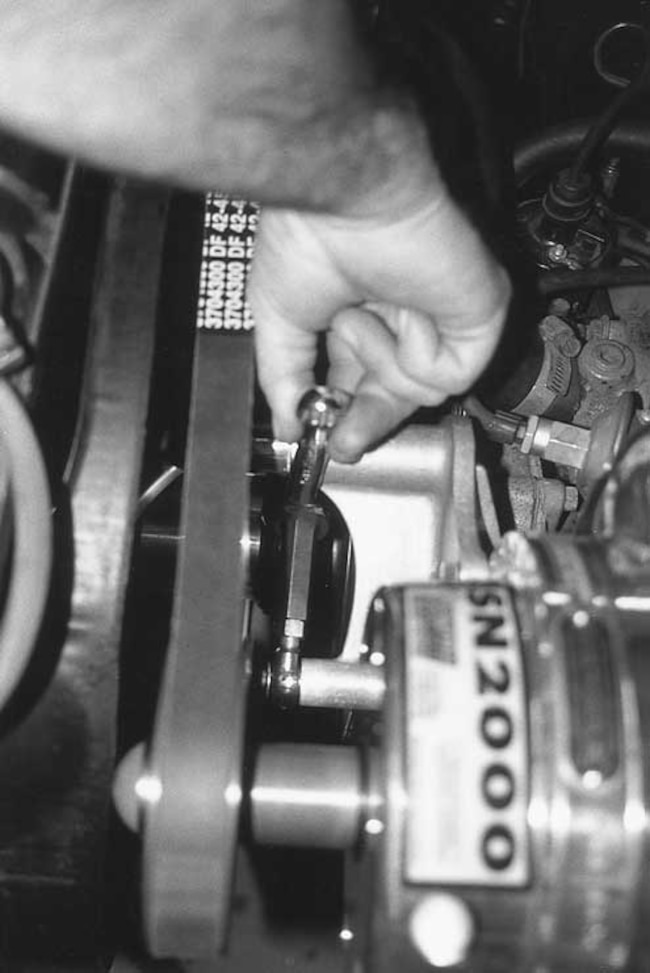 Tightening down the tension adjuster on the bracket assembly delivers the correct belt tension. 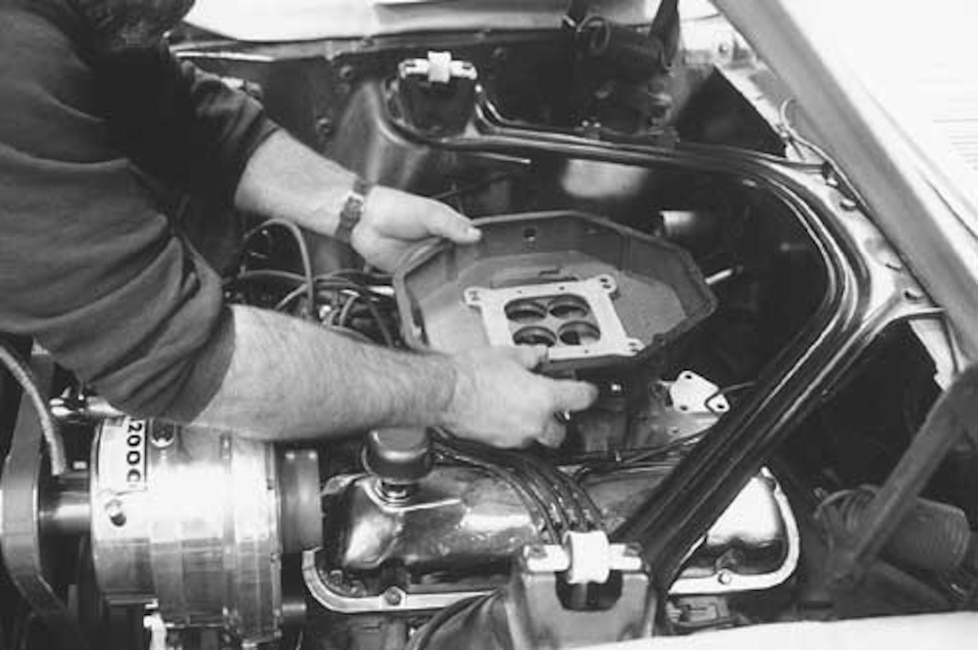 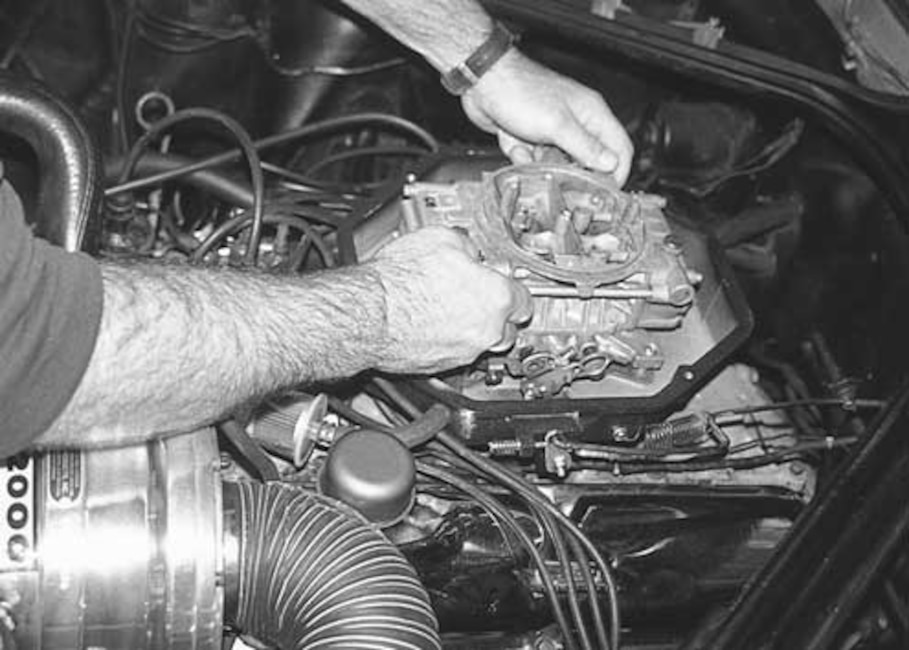 Next, the Holley goes into place on the studs. This specially prepared, 600-cfm four-barrel was prepared for us by Paxton distributor and supercharging expert Craig Conley of Paradise Wheels. 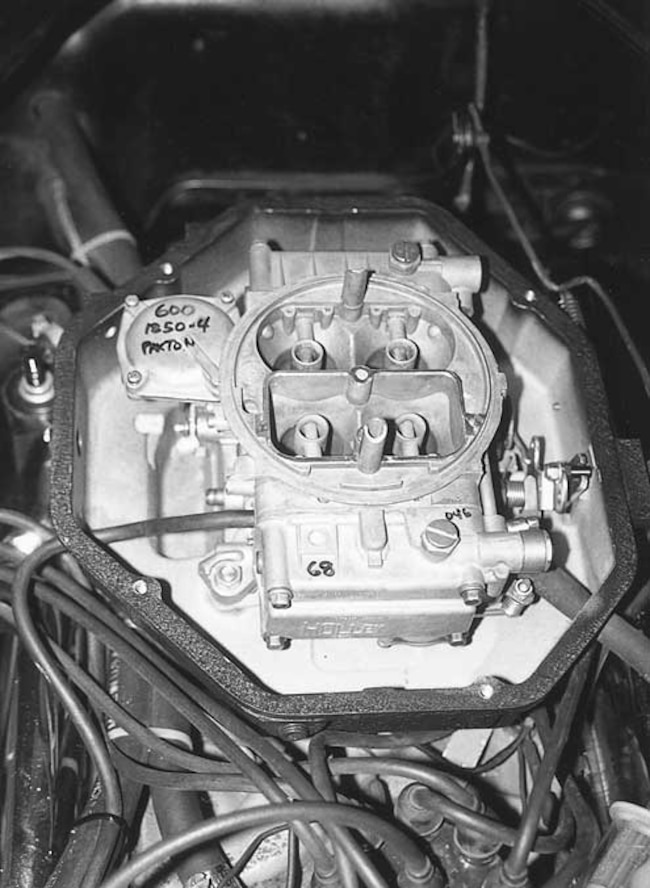 Notice how the fuel line, vacuum advance connections, and throttle linkage are routed through the airbox. Everything must be airtight to prevent boost leaks. 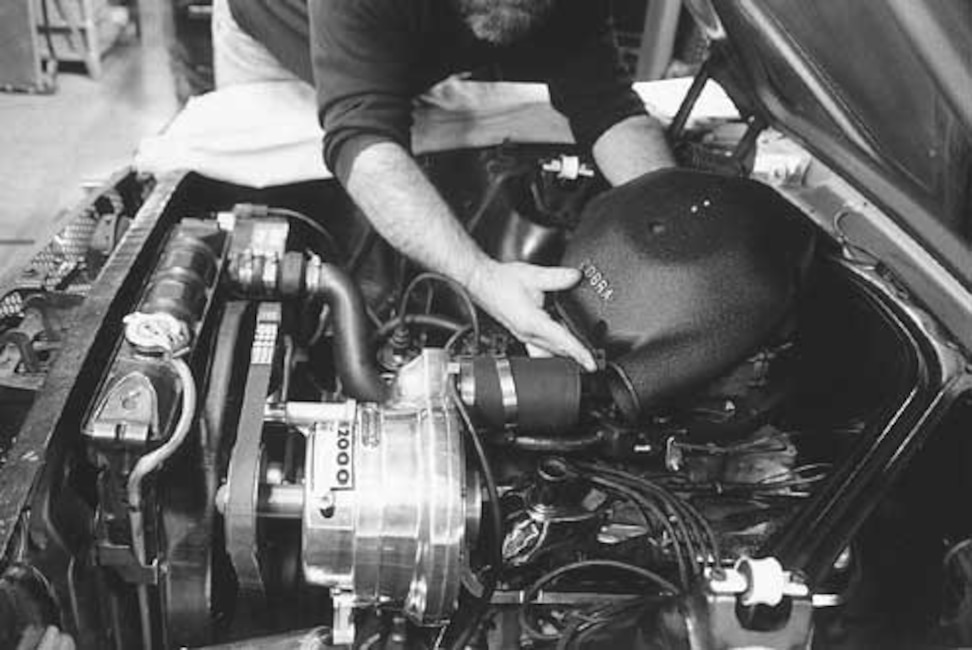 After installing the connection hose between the blower discharge port and the airbox inlet, the upper airbox half is lowered into place over the carburetor. 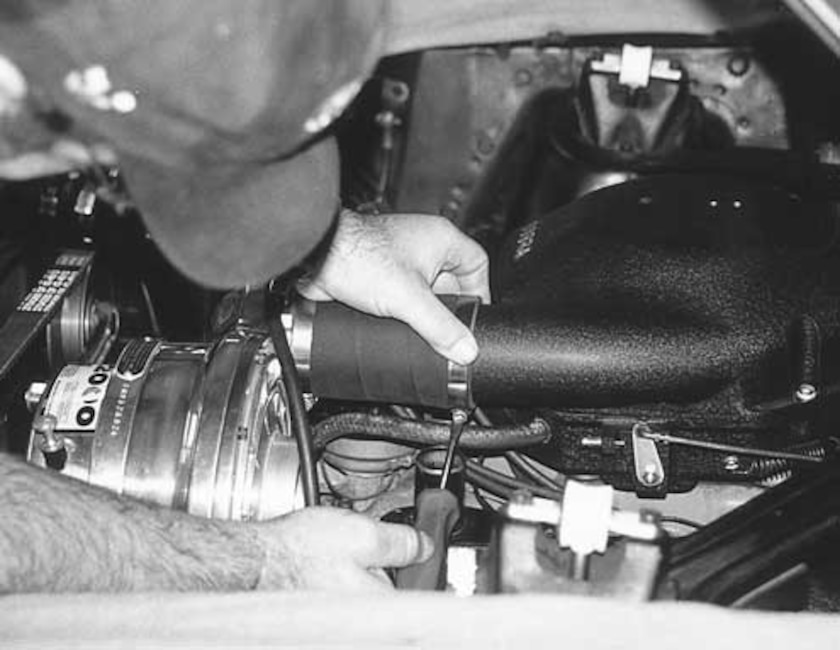 All connections must be tight to avoid leaks. Even at idle, the amount of air discharged by the supercharger is unbelievable. 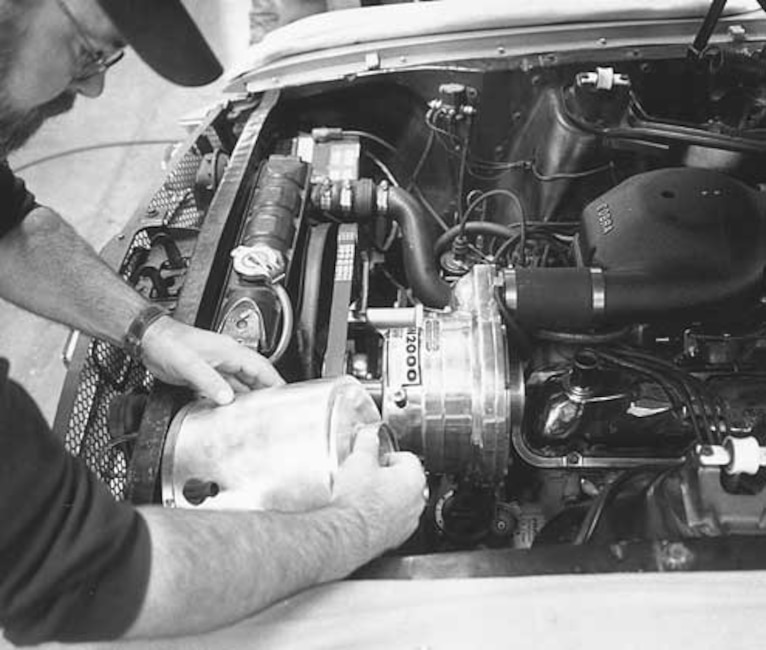 Next, Paxton technician Lance trial fit the air cleaner canister on the inside of the fender well. 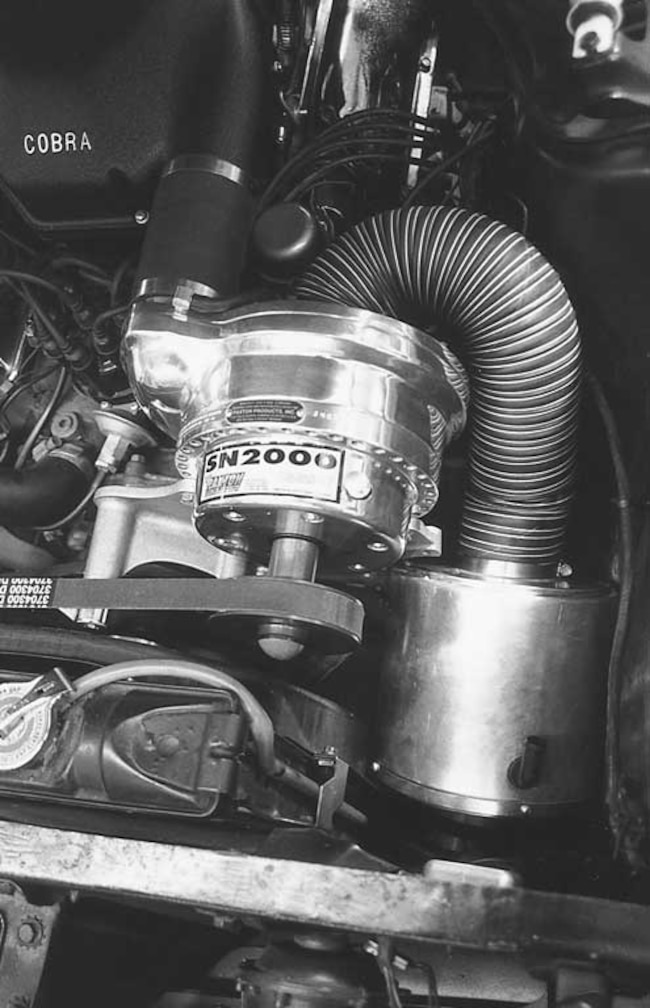 With the air cleaner canister fastened into place, a length of flex hose is used to connect the air canister to the inlet port on the back of the Paxton supercharger. The fitting seen on the outside of the air cleaner is for a breather connection to the valve cover. 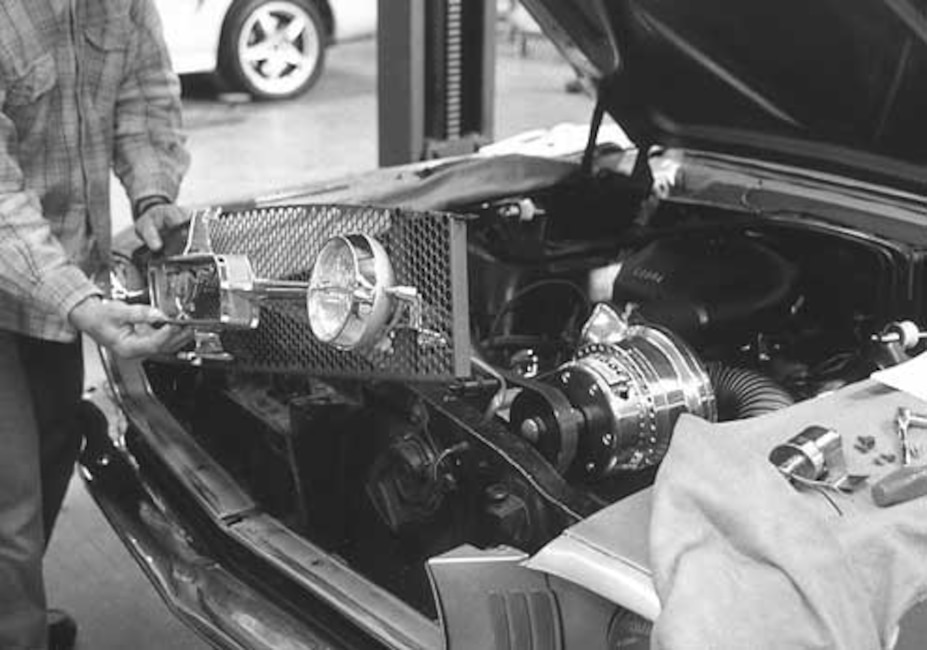 For access to the radiator core support for installing the blower oil cooler, we removed the grille assembly from the 1965 GT. 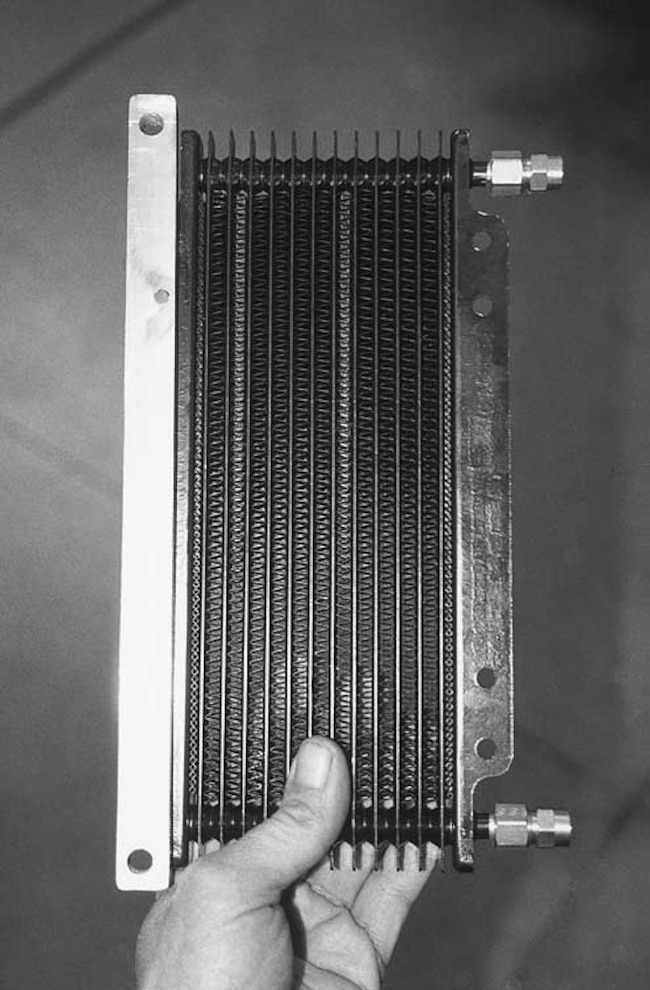 To prepare the blower oil cooler for installation on the Mustang’s core support, a special bracket was fabricated. 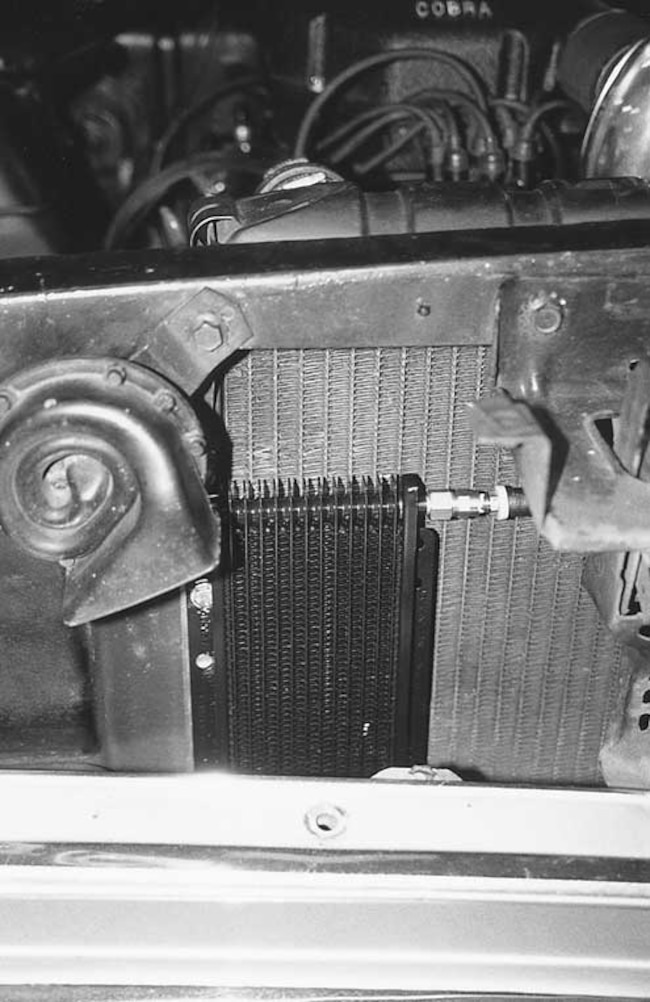 The bracket allows the cooler to be attached using the existing holes for retaining the radiator. Just use longer bolts. 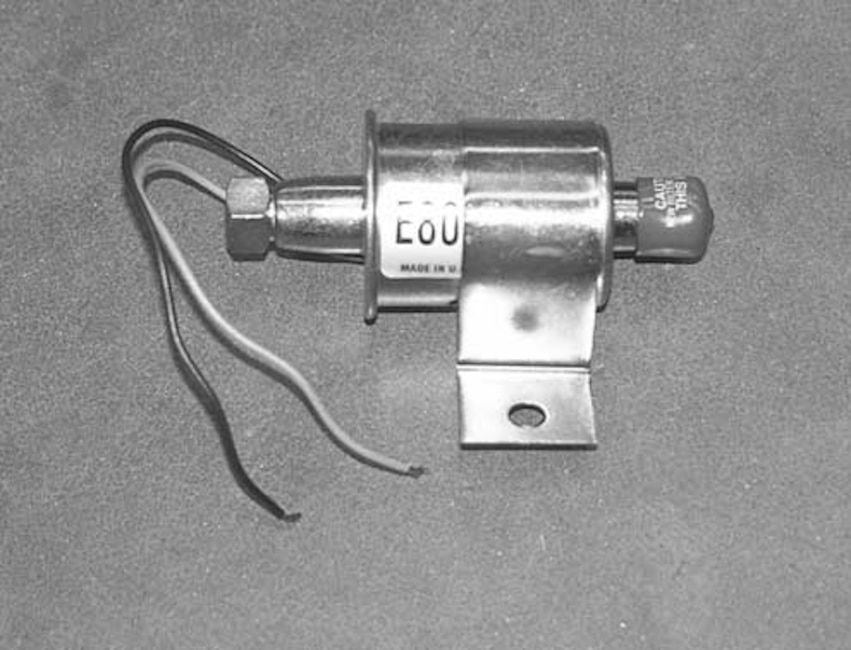 Here’s the small electric pump used to move the oil through the cooling circuit. The pump is both quiet and powerful. 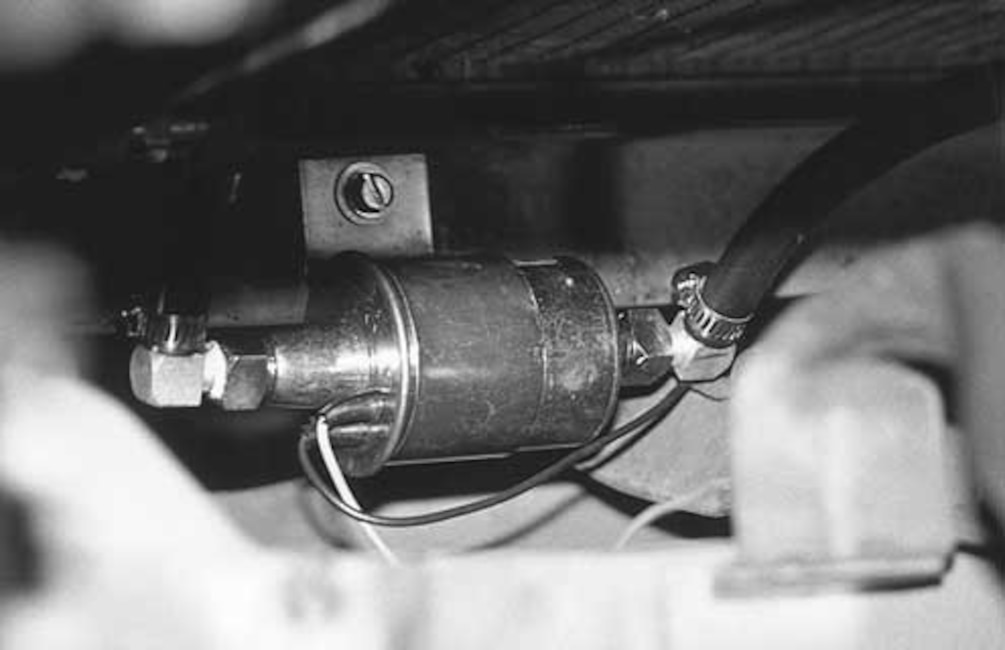 The oil pump and lines were set up in front of the radiator. When everything looked good, we replaced the grille. A unique dipstick furnished with the cooler kit draws oil up through the center of the dipstick at the bottom. Oil is returned to the blower reservoir through a collar on the outside of the dipstick tube. 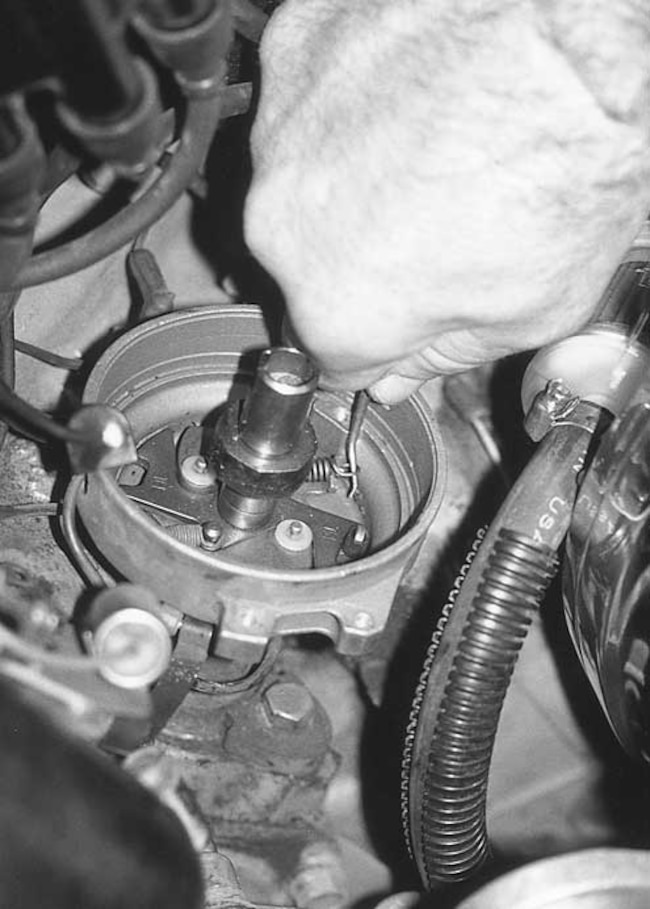 Craig Conley also provided the needed parts to recurve our stock distributor for a better advance curve with the supercharger. In this photo, we’re replacing one advance spring with a lighter spring to bring in the advance, while a rubber stop we installed will prevent our total advance from going too far. We want 36 degrees total. 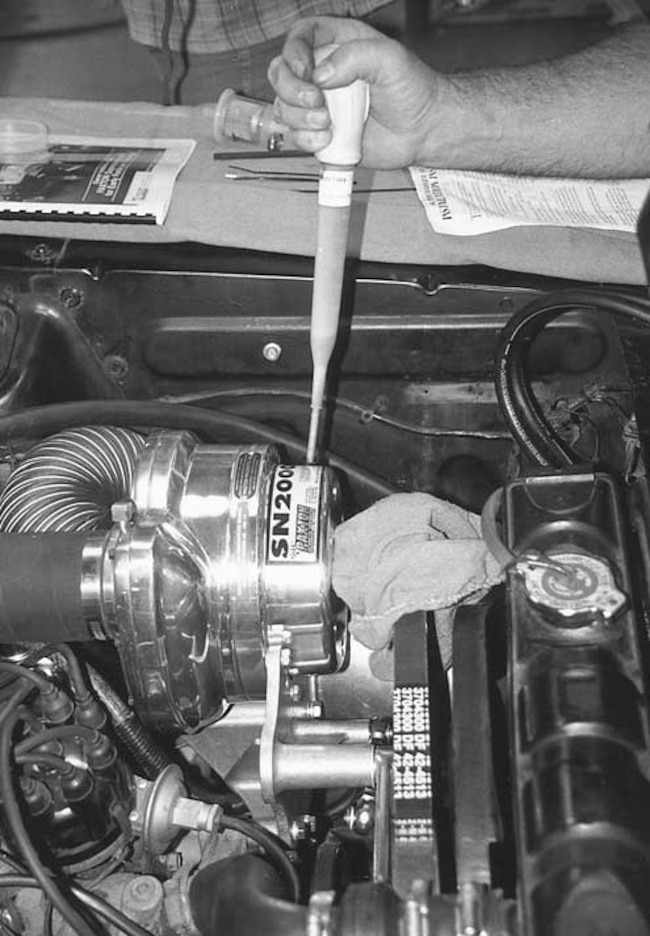 We filled the supercharger with oil, being careful not to overfill the unit. When the dipstick on the blower indicated full, we filled the remainder of cooling circuit by running the pump and placing the pick-up into a full oil can. 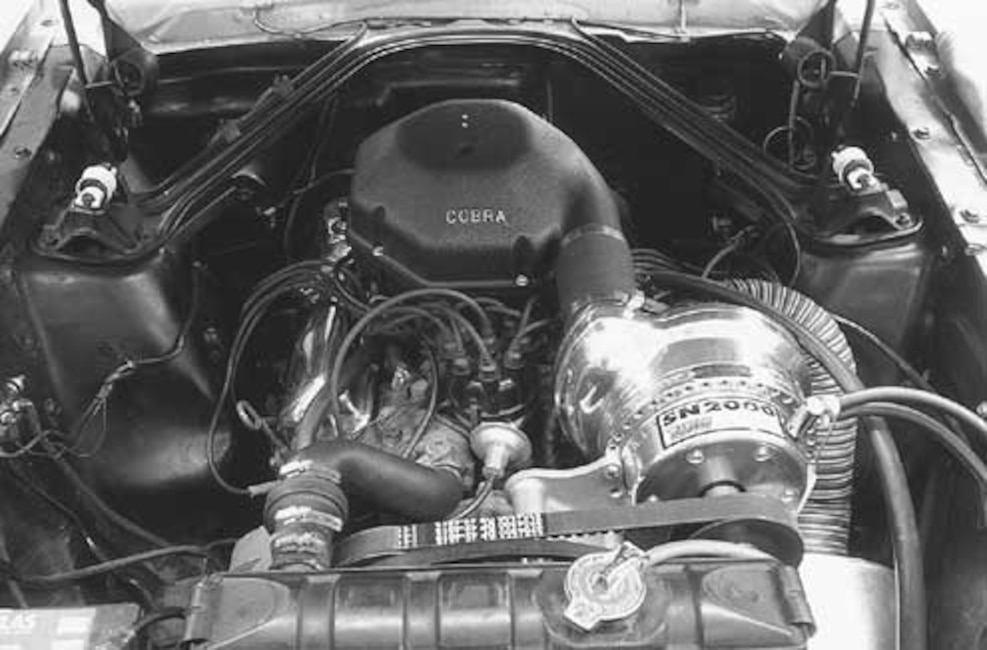 The completed Paxton SN 2000 supercharger installation looks really good, reminding us of the installation on the original 1966 Shelby GT350s with the Paxton option. 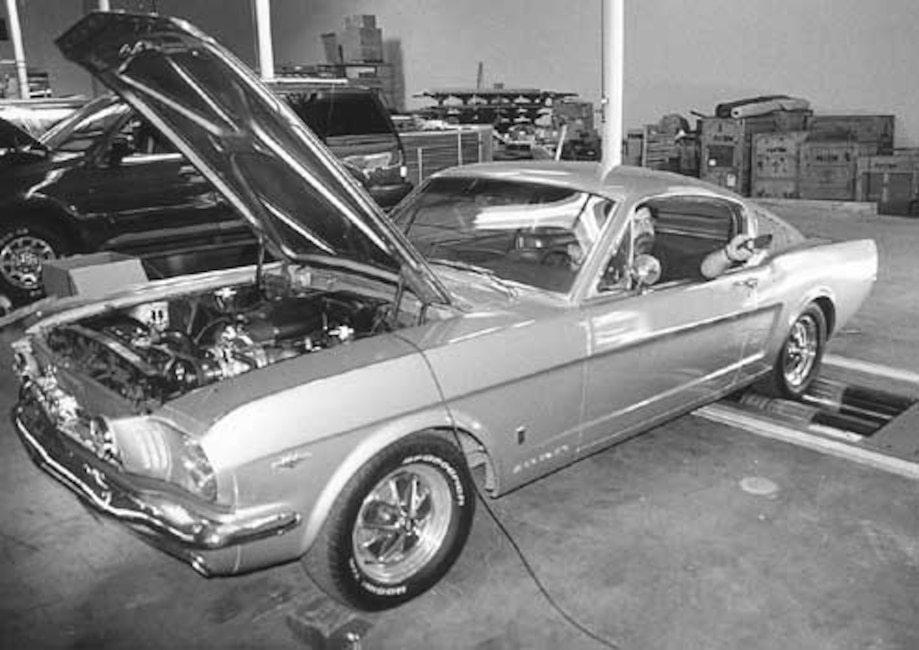 Most Mustang and Ford performance enthusiasts want more horsepower at the rear wheels. There are numerous ways to accomplish this, from bigger-inch stroker blocks to bolting on all sorts of high-performance goodies, like aftermarket cylinder heads, bigger cam, aluminum intake, or a host of other possibilities.

While all of these parts are great for adding horsepower, there’s a simple way to boost power if your engine is in good condition--supercharging. We know that Carroll Shelby was interested in supercharging, too, because his 1966 GT350 was offered with a Paxton supercharger as an option. The good news is that Paxton still offers a great unit specifically for early carbureted Mustangs.

With bracketry available from Paxton, it's possible to bolt on the Paxton unit for a horsepower increase of up to 40 percent or more, depending on boost levels and other performance components on your engine. Not only will your lightweight Mustang be ready to run with cars having far larger engines, you'll have great driveability to boot, meaning no lousy idle and fouled plugs to go along with the soggy bottom-end performance.

With a supercharger, torque is available as soon as you hit the gas. Your power will be available down low, not up in the clouds above 4,000 rpm where a mega-cam puts your power band.

The principle is exactly the same as it is for the thousands of late-model Mustangs with centrifugal superchargers. The mechanically driven supercharger pumps, or boosts, the combustion chamber with a compressed mixture, far above the normal atmospheric pressure. The principle is also the same for a turbocharger. However, a turbo is driven by exhaust gases rather than a belt. Other than that, the two devices both force-feed the engine to make it far more powerful.

Intrigued by the idea of duplicating Shelby’s supercharged GT350 application, we spoke to Paxton’s supercharging expert Bob Wyman. When we learned that a unit similar to the one offered on the 1966 GT350 was still available, we made the appointment to go out to the Paxton facility in Camarillo, California, for an installation and dyno test.

Along with the Paxton supercharger, we decided to use a specially prepared Holley four-barrel carburetor, modified to work smoothly and reliably in a supercharged application. Our project car, an original four-speed 1965 GT fastback owned by Joe Lackerdas, has an A-code 289, not a modified 289 High-Performance mill as found in a GT350, so it doesn’t have the solid-lifter cam, aluminum intake, Tri-Y headers, and other features found on Shelby’s original Cobra 289 engine. On Paxton’s chassis dynamometer, the stock 289 generated 124.1 hp at the rear wheels, similar to other 289s we’ve tested in the recent past. Remember, the old gross ratings were taken at the flywheel. Lots of power is absorbed in the drivetrain and rolling resistance.

Back on the dyno after the Paxton supercharger installation, rpm was limited to just 4,200. The stock distributor was suspect, with a loose-fitting rotor and a weak spring on the points. These problems can be easily remedied. A more powerful coil wouldn't hurt either, and one technician speculated that perhaps the boost was blowing out the spark as the rpm climbed. Also, the factory A-code cam waves bye-bye at about 4,500 rpm anyway, so we weren't too far off the mark.

Even at the low revs, maximum horsepower went from 124.1 to 152.5, an increase of 28.4 hp. Torque jumped from 176.5 lb-ft to 207.5 lb-ft, an improvement of 31 lb-ft overall. When you consider these numbers, be advised that Paxton technicians told us that early drivetrains can absorb up to half of the available power.

But there is more to these numbers. A closer look shows a 100 lb-ft gain at 2,000 rpm, right where it’s needed on a street car. Remember, our completely stock Mustang still has factory, log-type exhaust manifolds, 2-inch exhaust pipes with silent mufflers, and a cast-iron intake manifold. Paxton technicians told us that a prepped distributor, headers or K-code exhaust manifolds with 2-1/4-inch pipe and performance mufflers, and a good intake would be good for another 40-50 hp.

After driving his Mustang for a few days with the supercharger, Joe told us that the blower is completely silent. He also remarked that he must feather the clutch carefully because the engine wants to spin the one rear tire relentlessly. Remember, before the supercharger, Joe’s Mustang had 100 lb-ft of torque at 2,000 rpm. Now it churns out 200 lb-ft at 2,000 rpm. Joe tells us that his car pulls harder while running smoothly and quietly. Look for further upgrades on the 1965 fastback as we follow some of the suggestions made by Paxton, and we’ll keep you advised of the power increases.