When The Time Comes To Improve The Performance On Your Windsor Engine, More Than Likely The Intake Manifold Will Be One Of The First Things You Change. 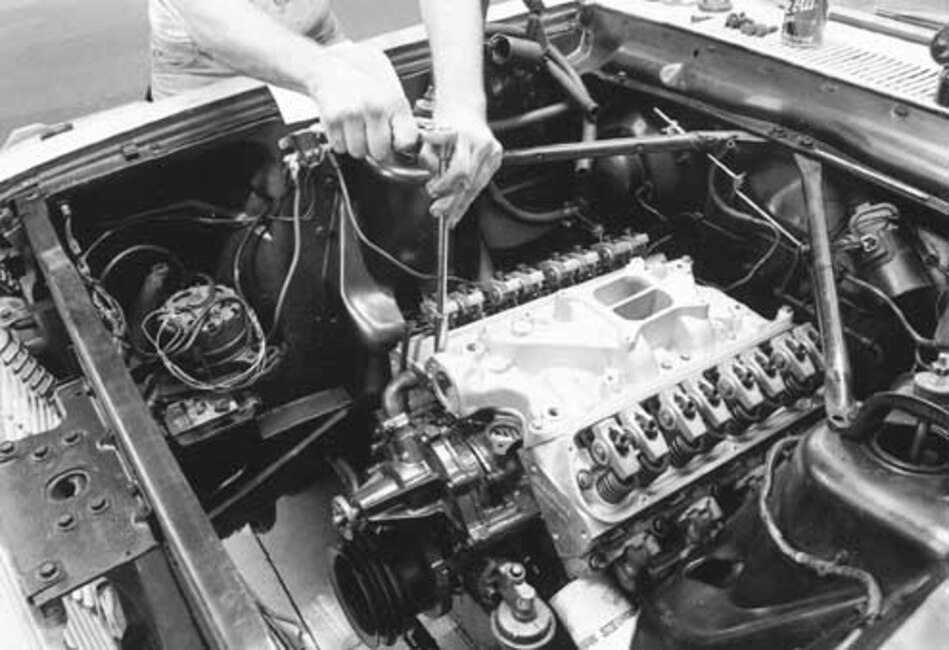 When the time comes to improve the performance on your Windsor engine, more than likely the intake manifold will be one of the first things you change. In most cases, the intake is one easily replaced culprit that's holds back power production. Factory supplied intakes were most often cast iron, so in addition to any inherent flow deficiencies, they also add unneeded weight. This makes intake manifold replacement with an aftermarket aluminum unit a good place to start when the goal is more horsepower.

It's a happy fact that there are a wide variety of aftermarket intake manifolds available today for the small-block Windsor Ford engines, which includes the 260, 289, 302, and 351 versions. Whether your application is high performance street use, road racing, or optimum quarter-mile times, there's a perfect unit out there for your needs. After a quick look at the different types of intake manifolds, we'll examine what's available and how the various types will best suit your car.

We'll confine our discussion to manifolds designed to use a four-barrel carb, dual four-barrels, or three deuces. Needless to say, these differences allow a wide variance in intake cfm capacity. Four-barrel carbs are available in such a wide variety of sizes that almost any induction capacity need can be met using a four-barrel.

However, there are other motives for going to a multiple-carb set-up aside from overall induction capacity. In a three deuce set-up, for example, all of the extra cfm capacity is held in reserve until needed. The engine runs off the center two-barrel until the throttle is floored, then all of the induction capacity becomes available. This keeps throttle response crisp because even though your overall induction capacity may be 1000 cfm, the induction capacity is proportional to demand. This keeps mixture velocity, and hence throttle responsiveness, up. The down side is that it can be difficult to get all three carbs to function in unison because linkages can be tricky and complicated. Unless your engine is a real animal, three deuces is usually too much carburetion.

The same logic applies to a dual four-barrel set-up. Around town, you're running on the primaries of the first carb, with six barrels in reserve. One great thing about multiple carbs is that they look so neat. This can be a big factor for bragging rights on cruise night. For racing purposes, dual quads are sometimes called for, but with the availability of the huge capacity Dominator-type carburetors, most racers will opt for the reliability offered by a single four-barrel.

Intake manifolds can generally be divided into two types--single-plane and dual-plane. Each type has its advantages depending on the application and the engine's state of tune. For full-on high-performance use, many enthusiasts choose a single-plane manifold, which refers to the undivided plenum chamber with a flat chamber floor. The plenum is the cavity in the manifold beneath the carb.

The advantage to a single-plane arrangement is that the manifold can be structured to provide an almost straight shot to the combustion chamber, which is best at high rpms. You'll see race cars most often equipped with single-plane manifolds. Again, there is very little in the way of internal structure in the manifold to impede the travel of the mixture to the intake valve.

The disadvantage to a single-plane is that it can contribute to soggy throttle response at lower rpm because the large volume of the chamber allows mixture velocity to drop below optimum. When mixture velocity drops, the fuel in the mixture tends to come out of suspension and can form pools on the manifold floor. This condition can cause lean cylinders, and hence power loss.

On a dual-plane intake, which is a better choice for street use, the plenum chamber is divided in half all of the way up to the base plate of the carb. The floor of the chamber is further divided into two different levels. The advantage to this arrangement is that chamber volume is cut in half with respect to any given cylinder. This helps keep mixture velocity up, resulting in crisp throttle response and reducing the danger of pooling.

A divided plenum chamber also means there are only four cylinders per chamber instead of eight, so cylinders are more isolated from each other. This reduces the danger of backfire or cross-firing. The street-driven car with a big cam will be better off with a dual-plane manifold because a big cam with long duration can contribute to backfiring at low rpm. A big cam will usually make more power with a single-plane unit, but on the street, this arrangement can work against you.

Another factor to consider during manifold selection is operating range. Many street manifolds are designed to operate effectively from off idle to around 5,000 rpm. This is a great choice for a street-driven car. A higher-performance engine might benefit from a unit with a higher operating range. Units rated from 1,500-6,000 rpm are also good choices for street use.

A good rule of thumb is that the higher the operating range, the larger the intake passages are. Smaller passages help with low-end torque and throttle response. Larger passages contribute to top-end power but sacrifice some low-end driveability. Manifolds in the 1,500-6,000 range really give you the best of both worlds, because 1,500 rpm is just above idle, but a street engine won't see more than six grand very often. Single-plane manifolds with large passages often don't become effective until around 3,000 RPM. An intake manifold with an operating range of 3,000-7,000 rpm gives great horsepower figures up top, but will have your car stumbling off idle for street use.

All of your other engine component variables should be considered before manifold selection. Try to have a grand plan for your engine, and choose your intake with your end result in mind. There's no crime in putting a single-plane intake on your stocker if high compression and a high-lift long-duration cam are also planned.

Check out the sidebars below for the specifics on individual intakes.