Making a Real-World Difference on Your Street-Driven Mustang or Special-Interest Ford.

Here at Mustang & Fords, we try to bring you the low-down truth on what various performance modifications are worth. Because most of our readers have high-performance cars used primarily on the street, we haven't worked with .750-inch lift cams or alcohol-burning engines. What we do try to focus on are modifications you can do to make a real-world difference on your street-driven Mustang or special-interest Ford.

You may remember the article where we dropped Coast High Performance's 347ci stroker engine into Chris Squire's ´63 Fairlane hardtop ("Hidden Horses," Oct. ´99). Recalling the engine dyno figures, the 347 made 345.1 hp and 371.8 lb-ft of torque at the flywheel with Ford K-code, 289 High-Performance exhaust manifolds, which were run wide-open with no exhaust system behind them. With the engine in the car and the exhaust system in place, we went to Dan's Performance Center in Hesperia, California, for rear-wheel horsepower and torque numbers on the company's brand-new Dynojet.

The car's exhaust system begins with the K-code manifolds, originally designed for the Hi-Po ´63 Fairlane. From there the manifolds empty into a single-exhaust system. Before you snicker about a single exhaust, you should know that this arrangement has a 3-inch diameter main tube leading to a single Flowmaster muffler with a 3-inch inlet and outlet. Behind the Flowmaster is a single DynoMax "can" muffler, also with 3-inch openings. Using this arrangement, the Fairlane made 227.2 hp and 260.0 lb-ft of torque at the rear wheels with the air cleaner off. Do the math and you'll find that 117.9 hp was lost to the drivetrain, rolling resistance, and exhaust. Torque reduction was 111.8 lb-ft, with both figures representing a huge loss, considering the potential for a 347.

Interestingly, the figures compare closely with those obtained in our ´64 Fairlane 302 buildup ("Top-Flight Fuelie," Dec. ´99). Both engines have Edelbrock aluminum heads and a K-code exhaust. Our 302 made 206 hp and 250.1 lb-ft of torque at the rear wheels. Clearly, something was holding the 347 back and keeping it from realizing its true potential. It's almost as if the extra displacement wasn't there.

Our suspicions were that the K-code manifolds just didn't flow well enough to handle a 347 stroker. Although they represent a huge improvement over the stock 289 log manifolds, with the 347 we suspected we were getting too far away from a stock condition to expect good performance. We decided to test a set of Hooker Super Competition headers on Squire's ´63. On this car we didn't need to worry about a column-shift linkage interfering with the header installation; the T5-equipped ´63 hardtop was ready to go. We took our project to Windsor-Fox Performance Engineering because of the company's always-excellent technical support.

Working at Windsor-Fox gives us confidence because we can get expert advice on conversions of almost any stripe. We'll show you what's involved in getting a set of Hooker headers into the vintage Fairlane. We'll also show how fabrication expert Warner Johnson of Discount Muffler in Apple Valley, California, adapted the existing exhaust system to the new headers. Finally, we'll go back to Dan's Performance Center to see just what improvements were realized. Because we're interested in the difference from the headers alone, we retained the same exhaust system configuration--a Y-pipe going into a 3-inch, single-tube system. This is the kind of real-life comparison we love to do. We think you'll be surprised at the results.

What's the overall improvement in the power production on the 347 as a result of our modifications? Try 104.5 hp and 96.6 lb-ft of torque. Putting it mildly, it looks like installing a set of Hooker Super Competition headers is a good bet for improving the power making potential on your Ford V-8. Apparently, installing a K&N air cleaner element doesn't hurt either. 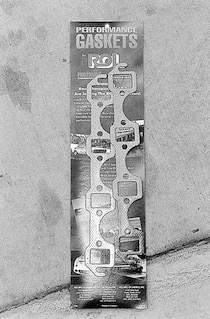 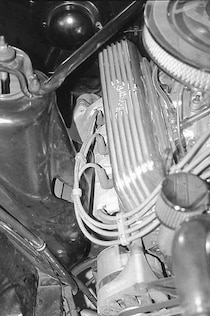 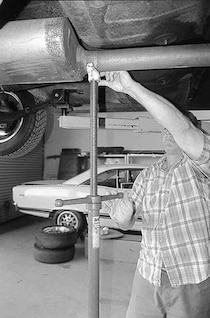 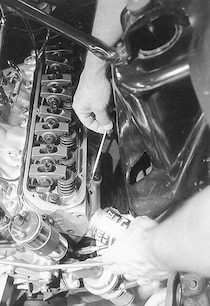 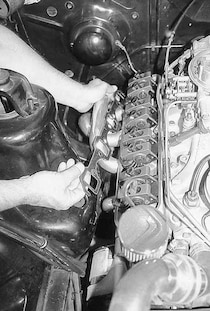 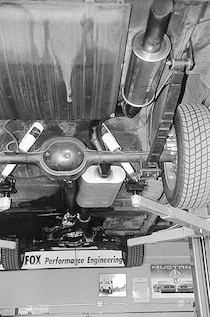