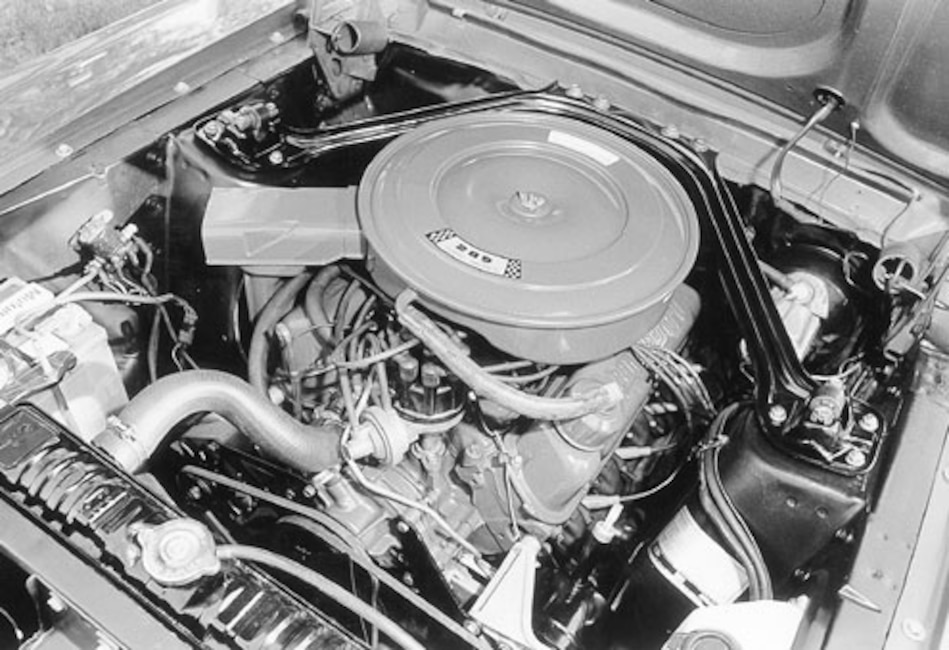 Keep your engine—and your entire Mustang for that matter—running in tip-top condition with these following tips and guidelines from Mustang Monthly. 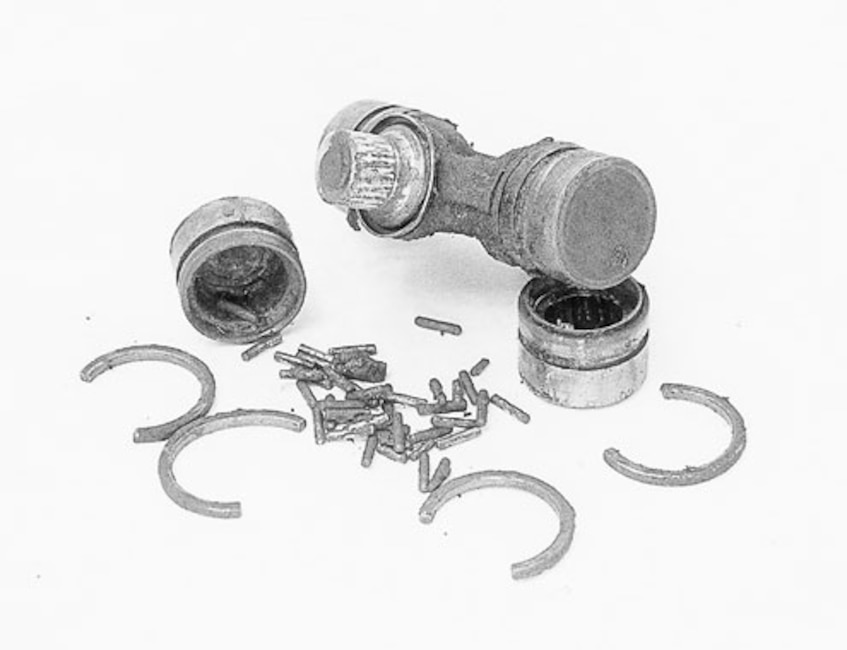 Original factory universal joints—if still on your Mustang—do not have any provisions for greasing them, but replacement joints do, and should be checked and lubricated regularly. If you have any vibrations in your driveline or hear a squeak-squeak-squeak sound that gets faster as you drive away from a dead stop, replace your universal joints before they fail and cause major problems. More than likely, if you have a vibration or squeaking sound, the joints already look like this one. 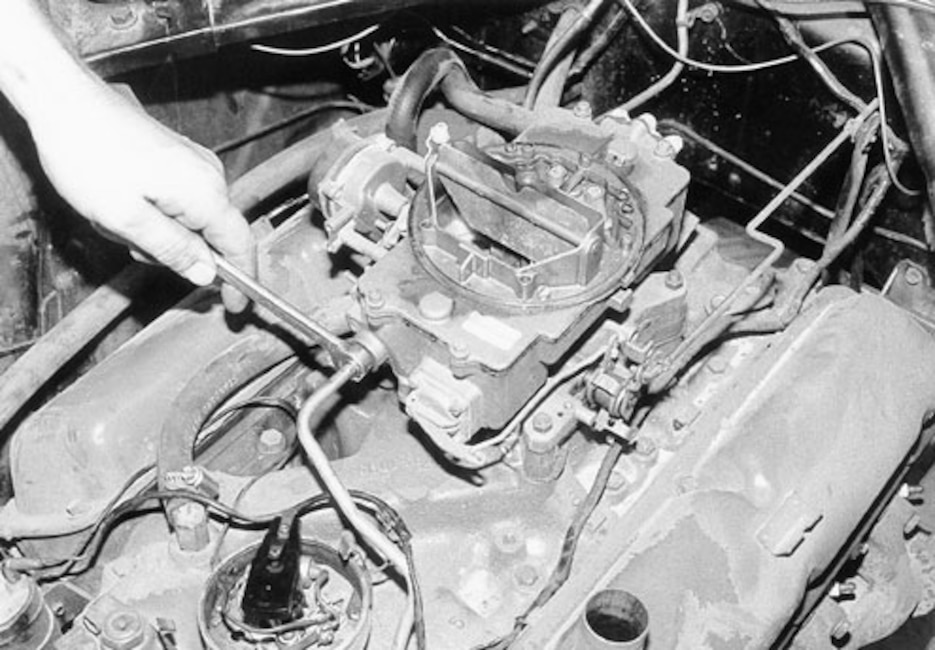 Periodically inspect all fuel hard lines and the rubber fuel hose for leaks. With engine vibrations, the hard line between the fuel pump and carburetor can loosen or crack with age. The rubber hose is susceptible to rot and grease and other corrosion-inducing chemicals, so inspect the entire length of the hose and its clamps. Don’t forget the short section of hose of the gas tank. 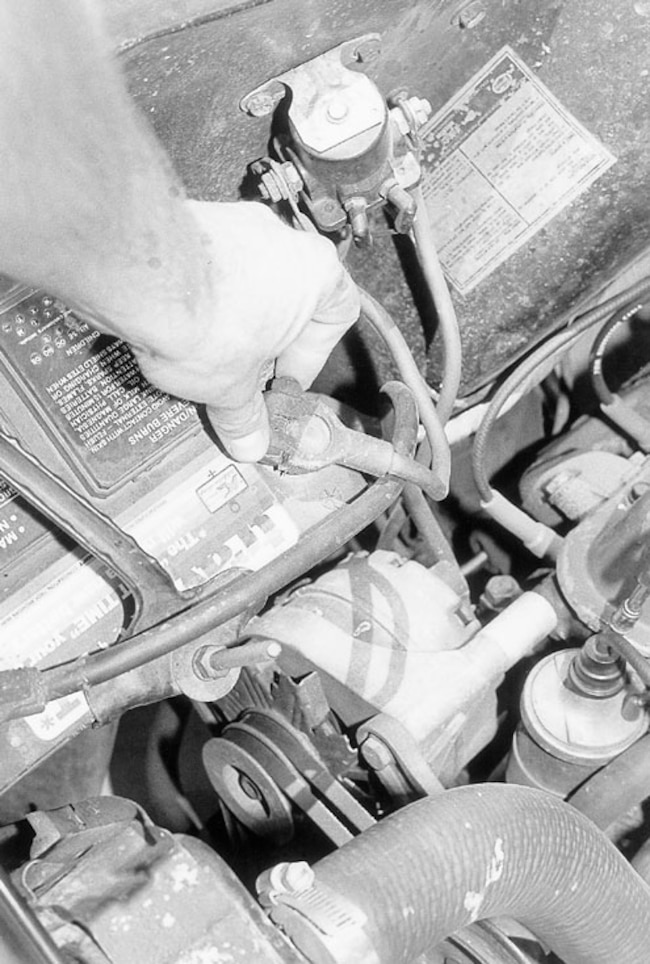 Battery cables easily corrode with the little use most vintage Mustangs see. Keep the cables and battery posts clean and tight, and we strongly urge the use of a battery terminal coating—even grease—to prevent voltage-reducing corrosion buildup. Don’t use emergency repair cable ends. Instead, purchase complete replacement cables. Lastly, if you buy auto store replacement cables, be sure to purchase your positive cable in red and your negative cable in black. Doing so will reduce confusion and increase safety in the event that you need to charge or jump-start the battery. 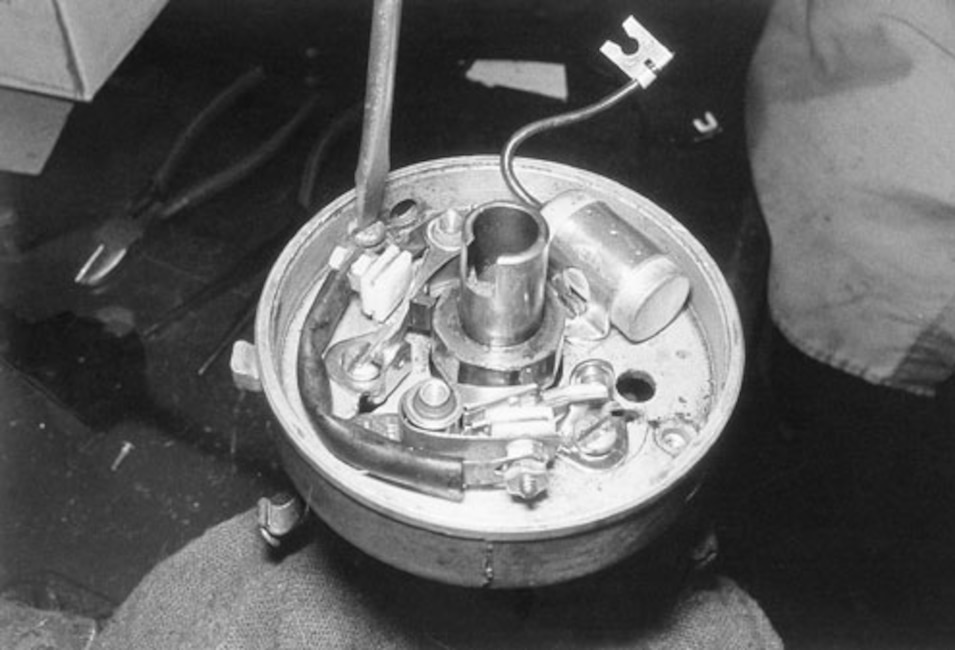 If you haven’t upgraded to an under-cap electronic ignition system—which we strongly urge for reliability—then carry an extra set of points and a condenser with you, either in your toolkit (see sidebar, on p. 69) or in your glovebox. A five-minute point replacement can make the difference between sitting on the side of the road and getting home before dark. 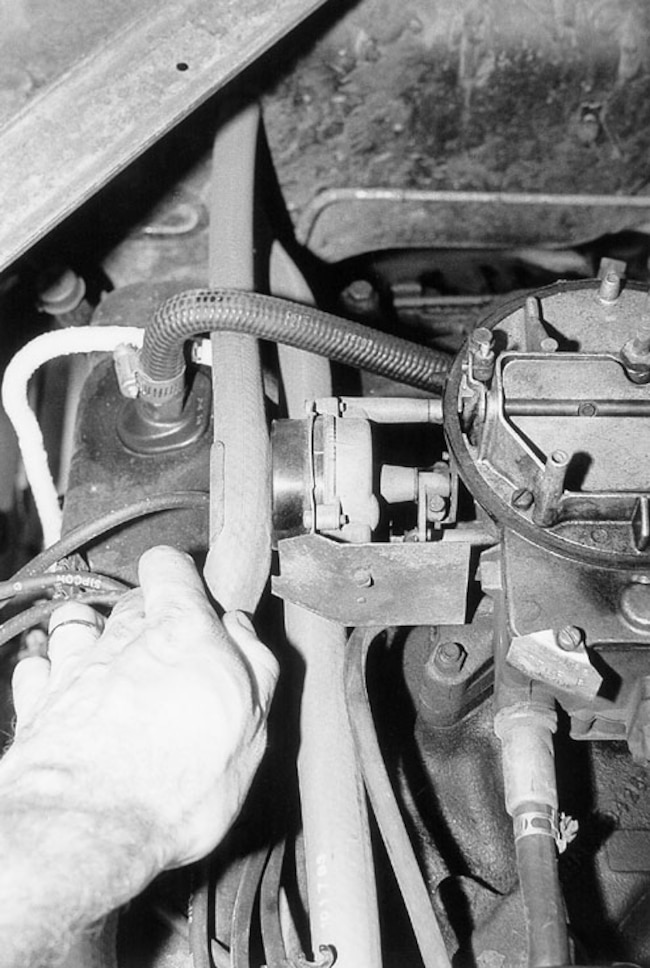 Check the condition of your hoses twice a year. Long storage times are just as bad as direct heat and sun for rubber parts. If a hose has a swollen end by the clamp, or feels soft and spongy along its length—which indicates the inner wall is breaking down—then immediately replace that hose. You might as well replace the rest of the hoses too, since if one hose is bad, then the other hoses aren’t far behind. Trust us. You’re just moving the weakest link in the chain from one hose to another when you replace only one bad hose. Check your radiator’s coolant level before every trip and top off as needed. You can always rig a coolant recovery bottle for driving, which can be removed for show duty, that will help keep your coolant where it should be instead of on your garage floor. Inspect the radiator cap seal, and have the radiator—including the cap—pressure-tested annually. 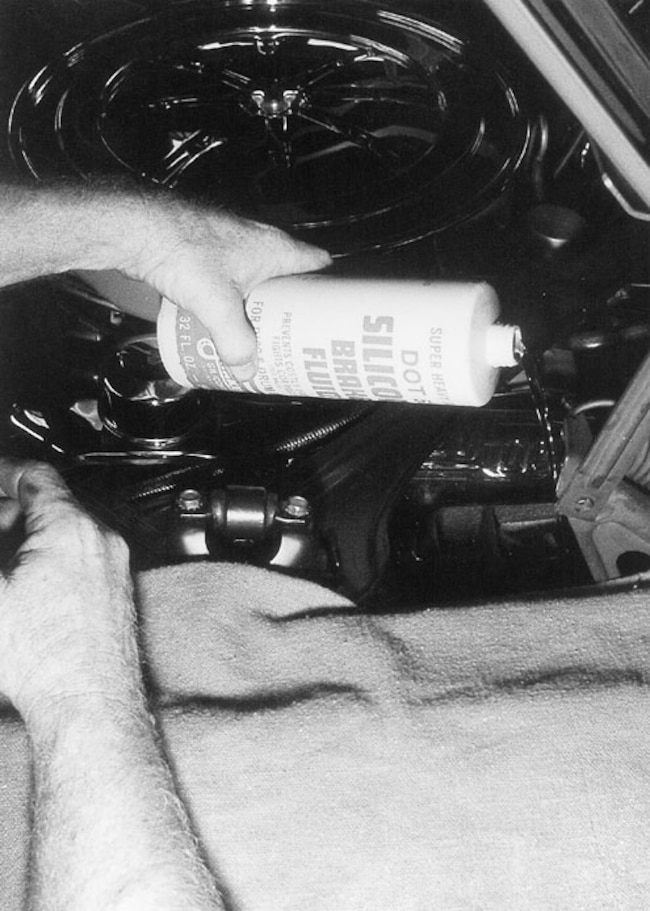 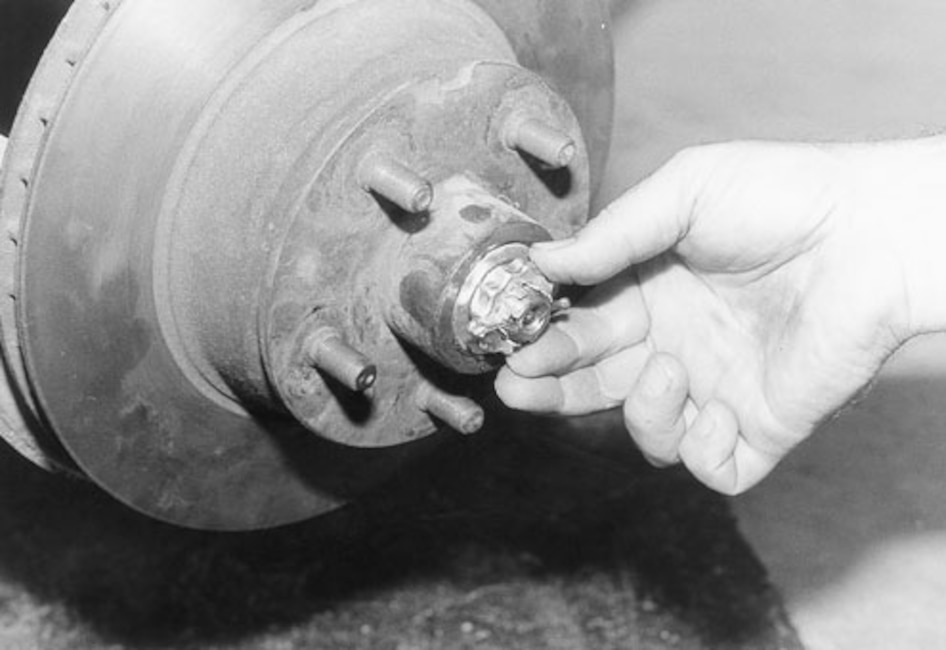 Inspect your wheel bearings twice a year to maintain proper wheel-bearing preload, which can affect handling, alignment, braking, and more. The bearings can lose their grease when a bad grease seal or loose bearing dust cap is present. Maintaining the dust cap seal is important to long bearing life, as it keeps bearing-race-killing dirt and grease-dissolving rainwater out of the bearings. 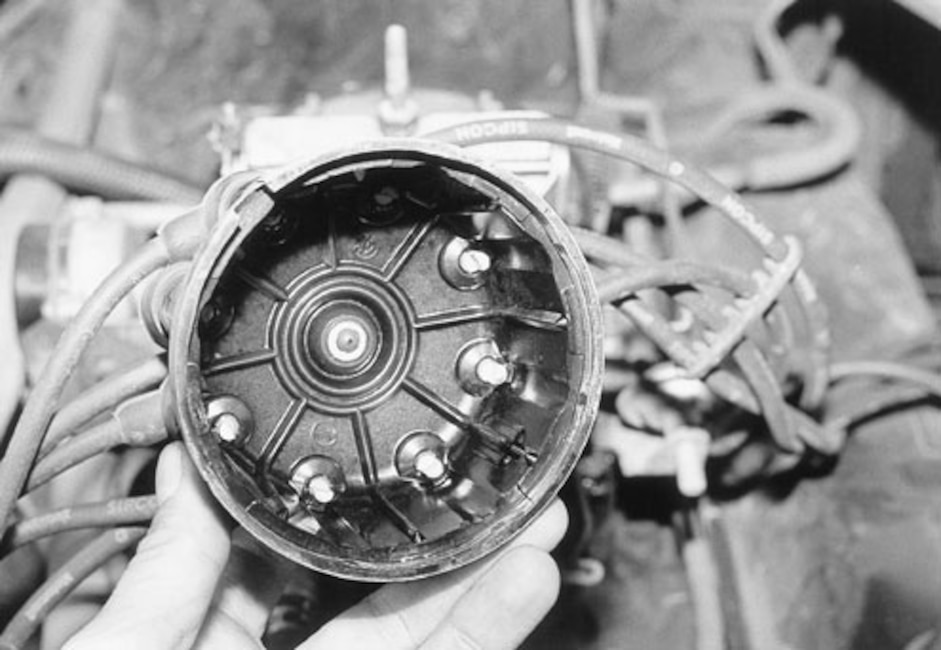 Moisture buildup from the ionization inside the distributor cap causes corrosion of the cap’s terminals. Check the cap every six months, and clean and file the terminals for a smoother running engine. You can also drill a small vent hole in the cap—similar to a late-model cap—to reduce the moisture buildup. 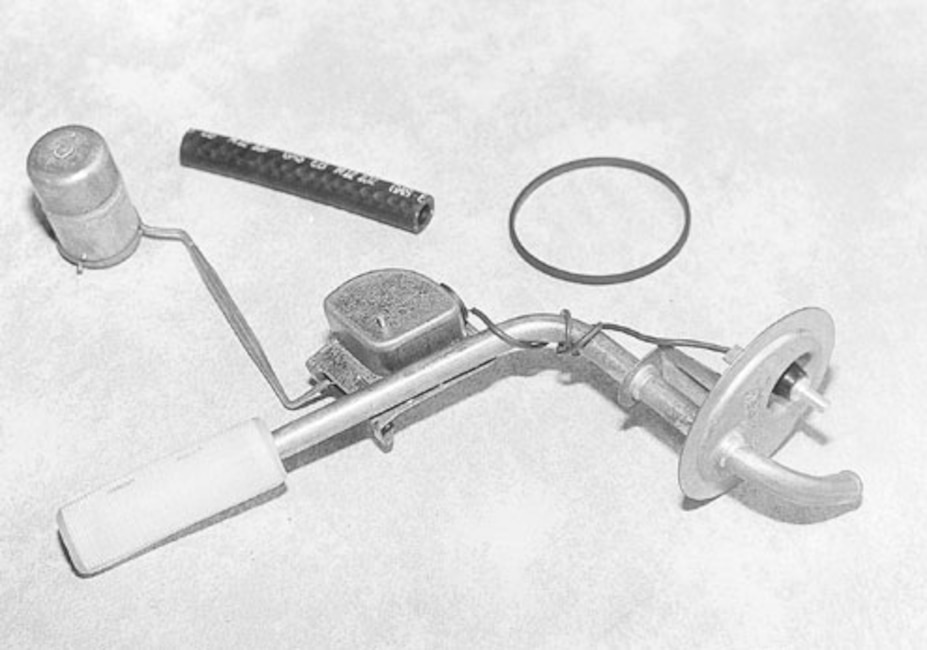 Fuel-level readings aren’t always the most accurate, and several Mustangs we’ve been in don’t read the fuel level at all. We even drove a ’66 the other day in which the owner told us “when it reads empty, it still has a quarter of a tank in her,” and we just had to smile. Fuel-level senders are available for most Mustangs and are relatively cheap. Do yourself a favor and replace that faulty or misreading sending unit now, so you won’t have to remember the last time you put gas in your vintage Mustang. 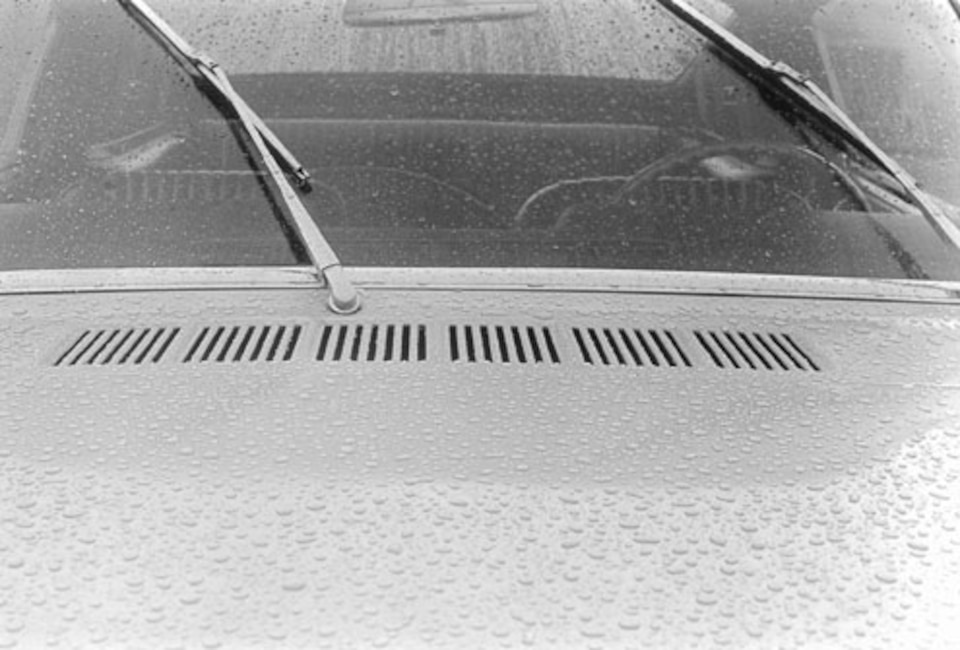 If your cowl leaks, invest in a cowl cover for your Mustang. You never know when a downpour might spoil your afternoon drive, but it doesn’t have to spoil your carpet and floorpans. Keep the cover in the trunk, so you can enjoy the dash vent’s airflow but still be prepared for nature’s worst. 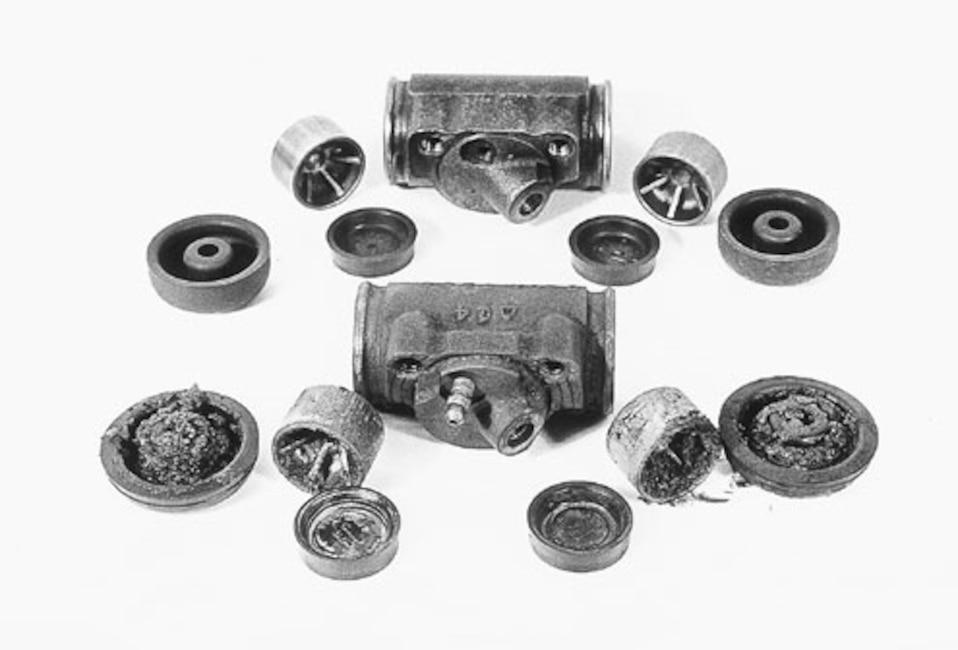 Need more proof? Flush your brake fluid annually. If you don’t, the inside of your wheel cylinders could easily look like this in a year or two. Flushing the fluid out also rinses out the dirt and broken-down rubber particles in the braking system. Stopping power is reduced and loss of fluid from the wheel cylinders is practically guaranteed if you don’t maintain the fluid quality. 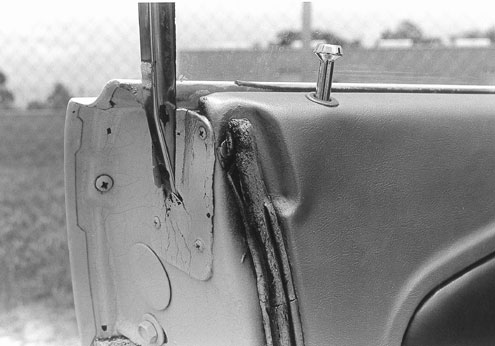 Many vintage Mustangs on the road have original or missing seals and weatherstripping. Old, hard seals do little for driving comfort by allowing road noise, dirt, and water to enter the passenger area. Installing a new seal kit around the doors, new felt window runs—to prevent rattling windows—and even front and rear window gaskets can make a big difference in the quality of your drive.

Tooling around on a Sunday afternoon in a vintage Mustang is one of our hobby’s greatest pleasures. But all too often those quiet afternoon rides to watch the sunset are interrupted by some mechanical devil that lurks under that long hood of your Mustang. Nothing can ruin the solitude of a relaxing ride quicker than the ride coming to an abrupt end in the middle of an intersection.

Any number of problems can creep up on an unsuspecting vintage owner who hasn’t been keeping up his end of vehicle ownership—maintenance. Vintage Mustangs are different from your everyday work-and-errand vehicle. Vintage Mustangs aren’t used often—usually only on sunny days or for show duties—thus they require a bit of a different maintenance routine. Some extra checks must be thrown in as well every time you get behind the wheel. Remember, depending upon the condition of your Mustang, and whether it has been restored—or how long ago it was restored for that matter—determines what areas should be scrutinized.

Some Quick Thoughts To Get You Going


Electrical systems are always a problem at some point in time. Thirty-year-old wiring has a habit of losing its protective vinyl cover, and then shorting out. Most reproduction harnesses are reasonably priced, so it might be easier to simply replace the wiring rather than trying to cut, splice, or solder some sort of patch repair.

Cooling systems are, of course, high on the ruining-your-Sunday-afternoon list. Make sure you have a good radiator cap and a strong radiator. Flush your cooling system, and have the cooling system pressure checked annually to make sure you don’t have a weak hose or a pinhole in your radiator or heater core.

Those V-belts dry-rotting on your engine pulleys won’t hesitate to snap at the most inopportune time and leave you stranded with a dead battery, overheated cooling system, no power steering, or A/C to boot. Check and replace the V-belts yearly, or sooner if the car sits much of the time.

Standard automotive batteries don’t like to be drained completely, and then recharged several times a year. Either invest in a trickle charger or battery tender that can maintain the state of charge on your battery, or replace your battery with a deep-cycle marine battery that can be discharged and recharged repeatedly. Otherwise, your day trip might not even make it out of the garage. Brake fluid should be checked and replaced—yes, I said replaced—once a year.

Brake fluid sucks moisture out of the air and dirt from your brake system—which causes brake fluid to darken with age—so it needs to be flushed with clean fluid until the clean fluid runs from all four bleeder screws. Don’t use silicone-based fluid in a vintage car that sits most of the time, either.

Speaking of brakes, don’t park your vintage Mustang with the parking brake set. Instead, use tire chocks if you need to safely block your Mustang from going anywhere. When the parking brake is set for long periods of inactivity, the brake drums can seize to the extended rear-brake shoes, thereby preventing the release of the rear brakes when you release the parking-brake handle.

Tires are another potential problem with vintage Mustangs that usually sit for extended periods of time. Old-school bias-ply tires might be the ticket for show duties, but they tend to offer up a poor ride and even poorer handling for those sunny afternoon sprints to the beach or the park. Some black sidewall radial tires will do a better job of maintaining shape, tread wear, and air pressure over the long haul. Also, they are much safer for any type of driving and offer better braking and handling to boot.

Furthermore, we want to offer you these easy maintenance tips for you to use during your next visit to the garage. No need to thank us—we simply enjoy seeing all those vintage Mustangs out on the road every weekend. Don’t forget to wave when you see one go by.

Inspect your wheel bearings twice a year to maintain proper wheel-bearing preload, which can affect handling, alignment, braking, and more. The bearings can lose their grease when a bad grease seal or loose bearing dust cap is present. Maintaining the dust cap seal is important to long bearing life, as it keeps bearing-race-killing dirt and grease-dissolving rainwater out of the bearings.