The most popular, low-buck heads for making power from a small-block Ford are the 351W versions with a nice port job, which makes for a snappy 289/302 without selling the farm. But Bush Performance Engines in Fort Smith, Arkansas, has taken the concept a step further by bringing back the Clevor engine, a package that mates the large intake ports of the 351 Cleveland heads to the 289/302/351W blocks for affordable small-block performance. This is the next step up when 351W heads just don't get it done.

Performing the swap requires some minor machining and a special intake manifold to mate the Cleveland-style heads to the Windsor block. Back in the '80s, B&A Performance offered these manifolds in both Street Boss (dual-plane) and Track Boss (configuration), with versions for the wider 351 Windsor blocks as well, but manifold production was discontinued several years ago. Bush Performance Engines has picked up the rights to produce the manifolds so they are once again available, except for the 351 Street Boss, for building street or track versions of the Clevor small-block.

To understand what it takes to build a 351C-headed small-block Ford, you need to know the differences between the Windsor-style and Cleveland-style engines. Because the 351C employs vastly different cylinder heads, with canted valves, than the 289/302/351W, the pistons are designed for a different combustion chamber. The 351C was available two basic ways: with four-barrel heads with large ports and closed wedge chambers, or with two-barrel heads with smaller ports and open chambers. The 4V heads perform best at high revs, making the most of those huge intake ports and high-compression wedge chambers. It does not make a good street head because torque is available only at high rpm. The 2V heads sport smaller, more street-friendly intake ports and open chambers for lower compression, facts that make the 2V head more useful on the street where good low-end torque is needed. The 2V head was also used on the later 351M and 400M engines.

Heads Of The Pack
When building a Clevor Ford small-block, the 351C-4V head is the best choice only if you're reaching for high revs. This head has huge ports and closed, high-compression wedge chambers. The larger ports work best at high rpm because that's where we have air velocity, which makes torque. Closed chambers yield higher compression ratios, which means power. The 351C-2V head is designed for low-rpm street use. It's perfect for a street driver because the smaller ports provide air velocity at lower engine speeds. Again, air velocity makes torque. The larger, open chambers yield a lower compression ratio for use with today's pump gas. With the right piston, you can achieve 10.0:1 compression with this head.

The Australian Cleveland head offers the best of both worlds--smaller ports (like the 351C-2V head) for low-end torque and closed wedge chambers (like the 351C-4V head) for power increases. Aussie heads are also available from Bush Performance.

Bush Performance modifies 351C heads for installation on the 289/302/351W block, eliminating one water passage while creating another. Bush closes off the 351C water passage between the head and the block. Then a passage is bored in the forward-most part of the head at the intake manifold, which allows coolant to flow to the 289/302/351W manifold and thermostat.

The two 351C head types call for two types of pistons--one for a closed-wedge chamber and another for an open-chamber design. The 351C-4V piston is the same basic slug used in the '69-'70 Boss 302 engine because the Boss head is virtually the same as the 351C-4V head except for water-passage differences. (The '69 Boss 302 was actually the first application, from the factory, of the 351C-4V heads on a Windsor block).

The common denominator for 289/302/351W power is the Cleveland head. Your mission determines head selection. For the street, choose the 351C-2V heads with the Street Boss intake. For track use, step up to the 351C-4V heads with the Track Boss single-plane intake. 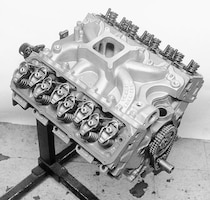 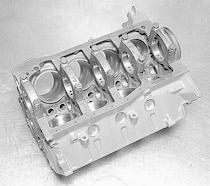 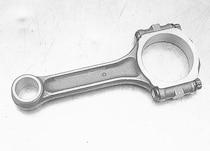 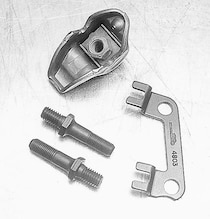 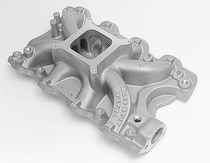