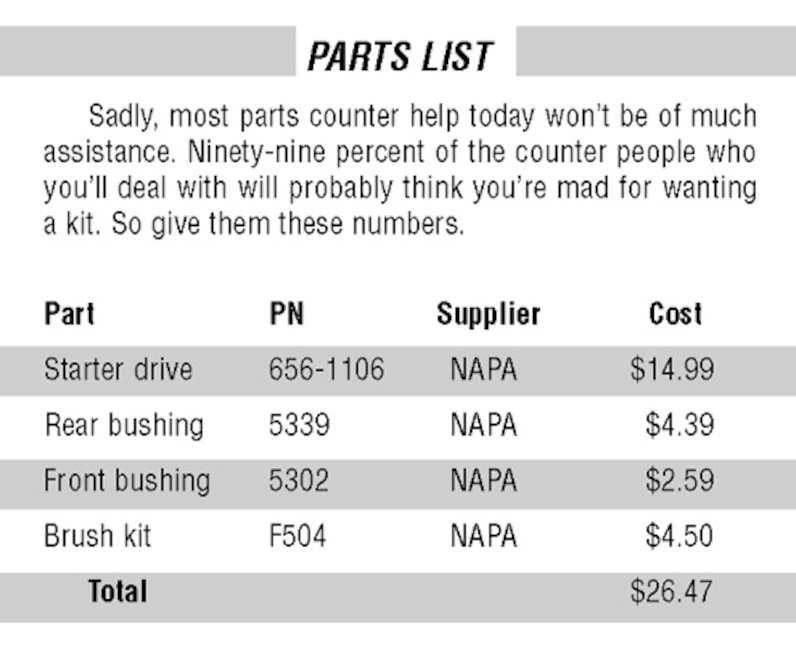 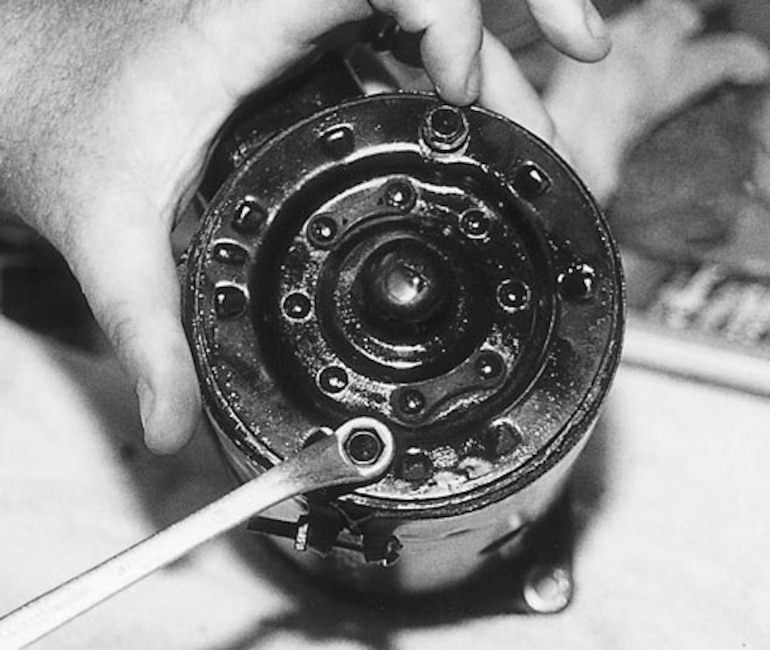 After you’ve removed the starter, remove the two long bolts in the end of the case. Clean these with a wire wheel or bead blaster. We painted ours so that they would be less likely to rust. We then coated the threads with Permatex Never Seize to make them easier to remove the next time. 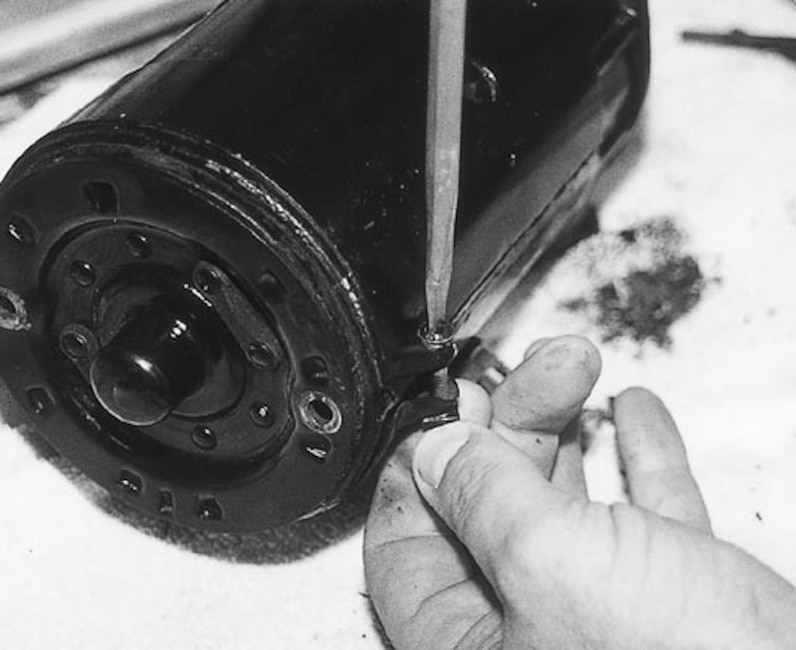 This band covers the brushes and the motor in order to keep water and whatnot from inside the starter. You’ll need to remove this to allow access to the brushes. 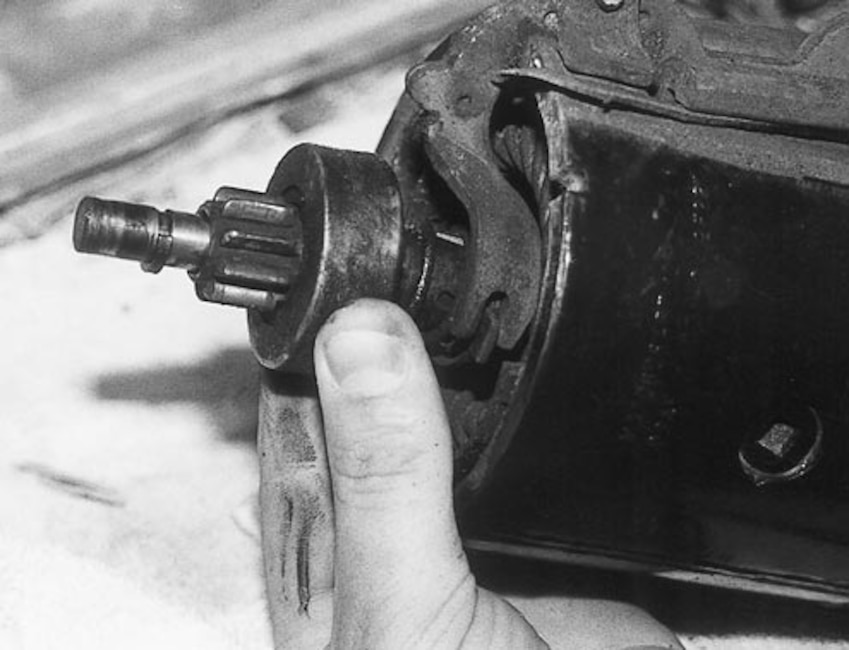 Evidence of our starting problem. Our one-way starter drive clutch is no longer only working one way. This caused the car to start, but as soon as the engine’s compression built up, the drive would kick out. Most frustrating. 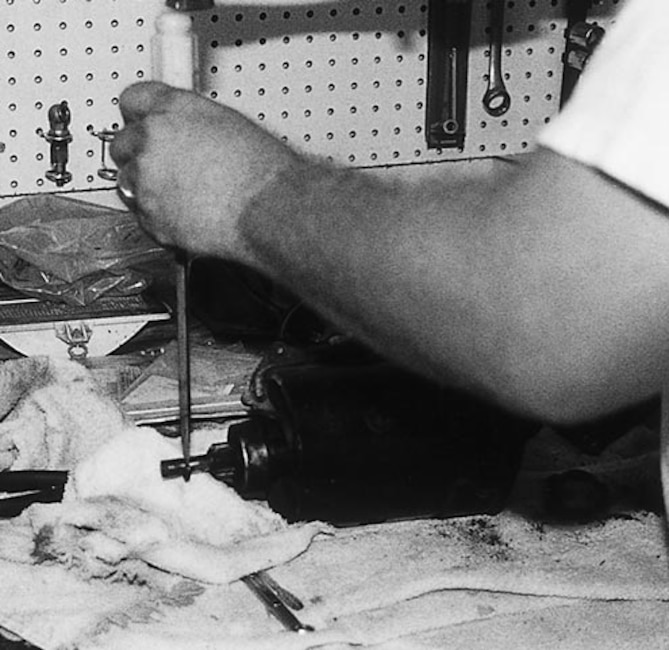 We started by removing the C-clip that holds the starter drive in position and also limits the drive’s travel. We smiled at the Motorcraft mark that was on the face of the drive. Looks as though ours is an original. 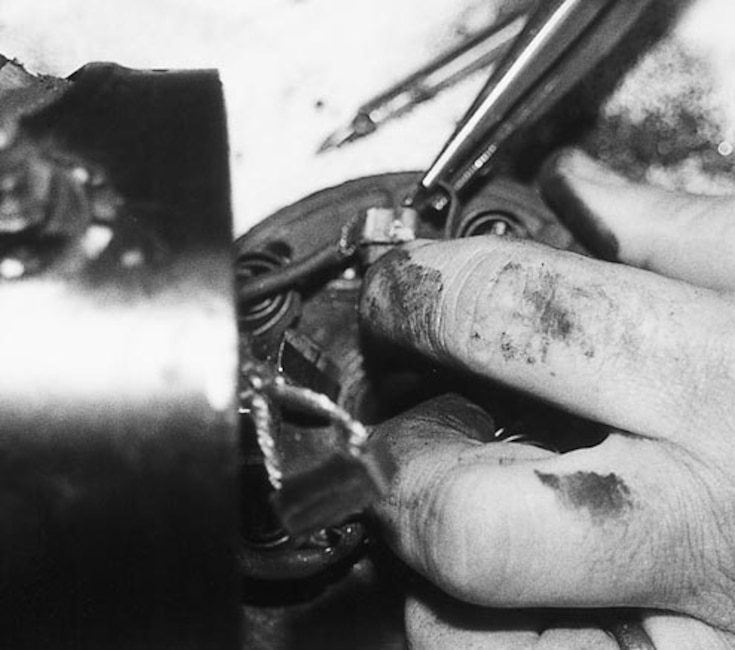 The next step is to remove the old brushes. These, like our drive, were vintage Ford. They were also so worn that they had started to wear the armature. 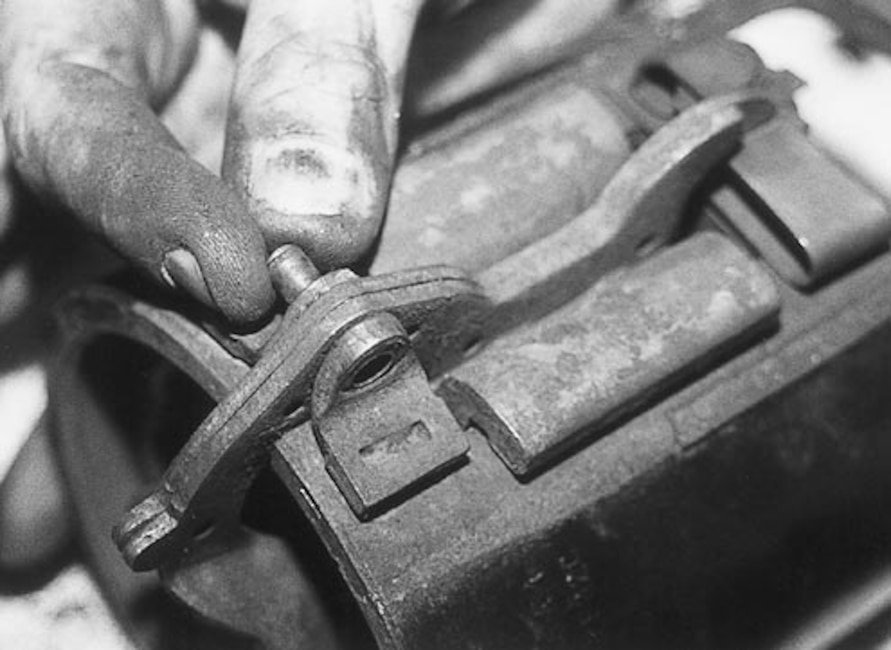 Though we have already removed the armature, this pin is all that holds the starter drive plunger lever. We will use our wire wheel to clean this piece—not that anyone will ever see it. We also cleaned out the body of the starter, using compressed air. 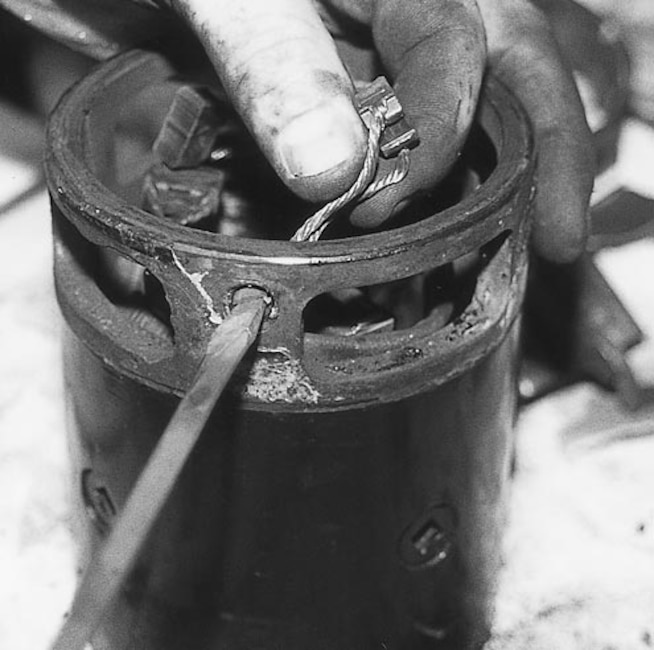 Remove the brushes next. Don’t immediately discard them because one of them will come in handy later. 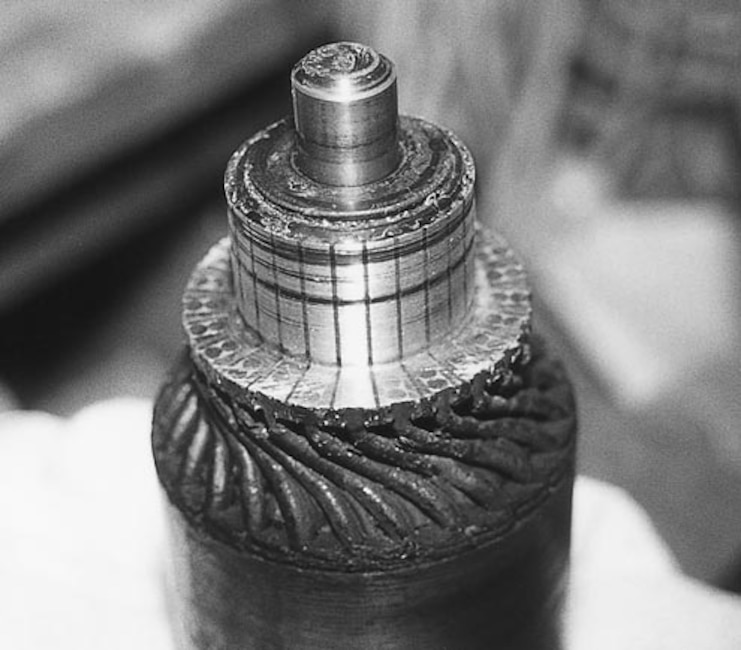 As we stated in caption 5, the armature was worn. Our solution—as hammy as it may seem—was to get out some 80-grit sandpaper and sand down the high spots. We didn’t want to remove too much material but enough to give the new brushes plenty of contact surface. 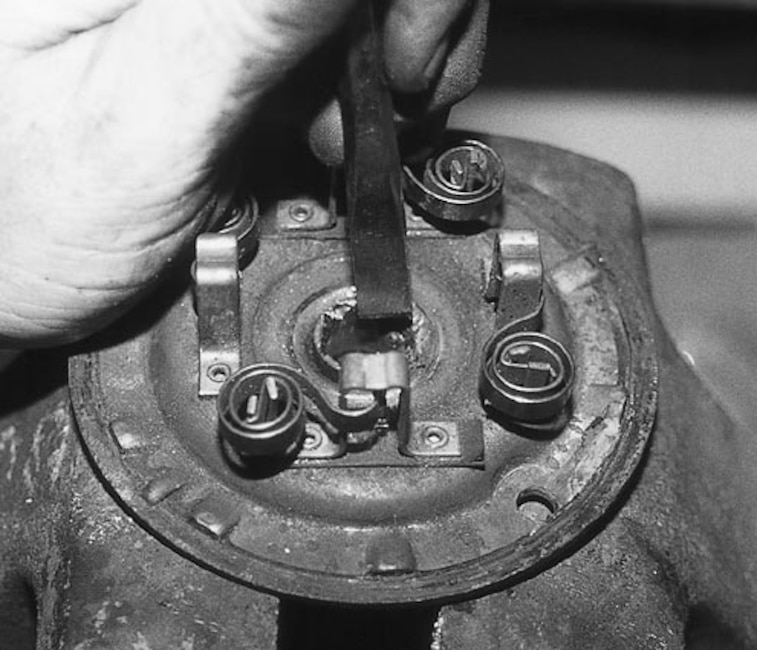 There was a lot of slop in the bushing out back, so we used a small chisel to remove the rear bushing. Be careful not to score the case. Work patiently and you should be rewarded with mangled bits of bronze bushings. 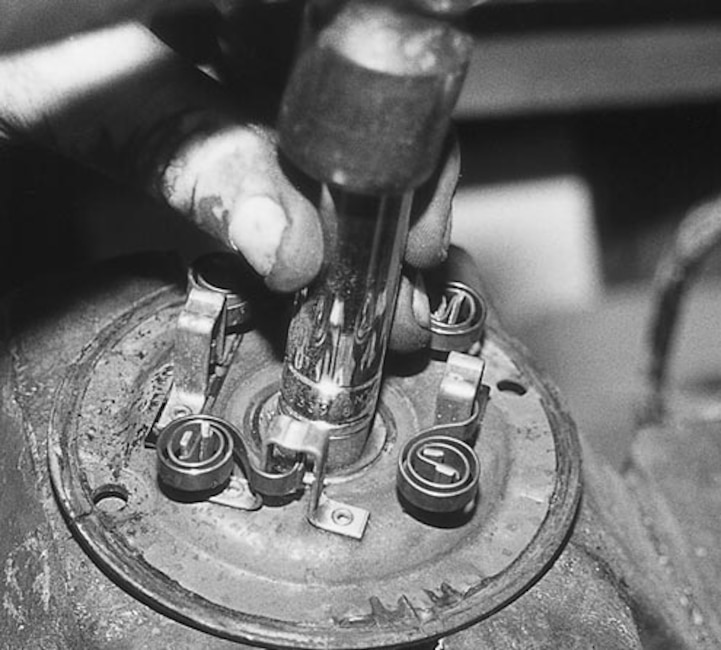 Check your new bushing on the shaft of the armature to be sure that there is no appreciable play. After the old bushing is removed, use a socket of equivalent size to tap the new bushing into place. 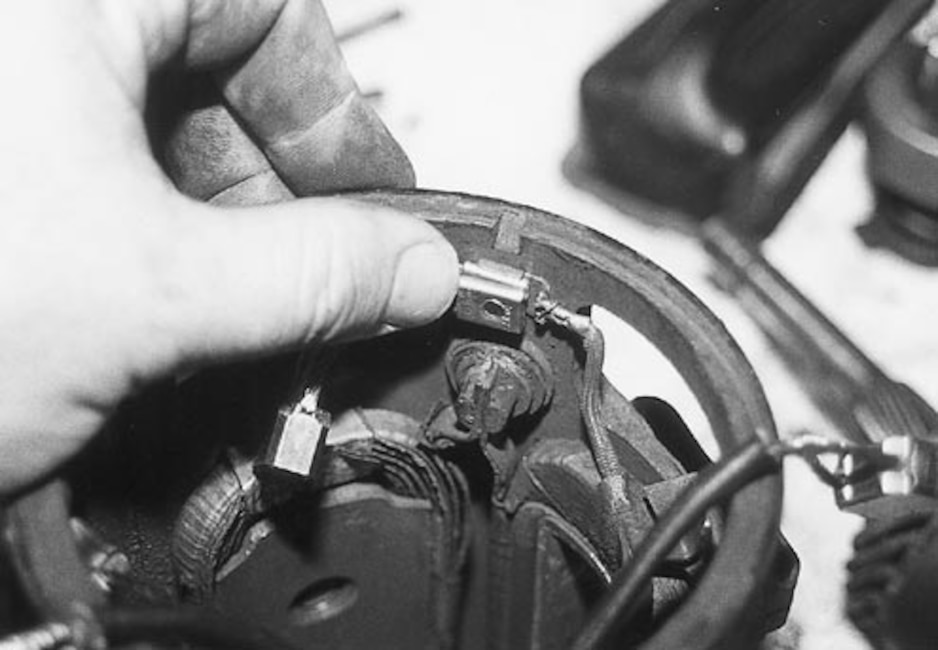 We had to use a Borg-Warner brush set rather than the NAPA set since the F504 set was a warehouse item for the stores. We took a quick trip to Pep Boys and purchased the Borg stuff. The one thing we found problematic was that one of the new brushes had no threads. We quickly snipped the contact from our original set and used it as a nut on the new set (arrow). 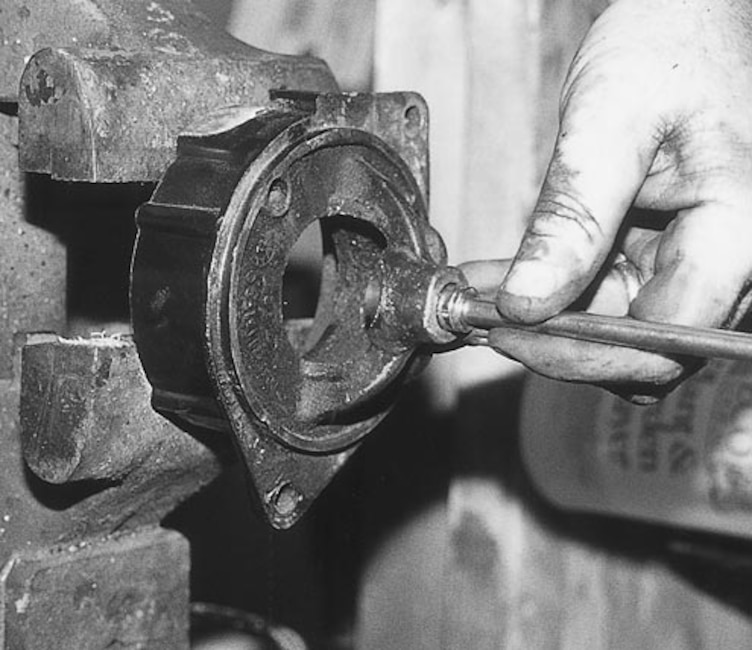 We used a socket to push out the bushing in the drive end. Be careful not to damage the case since it’s aluminum. The new brushes were put back from inside the case. We made sure that the new bushing was set in the same position as the original. 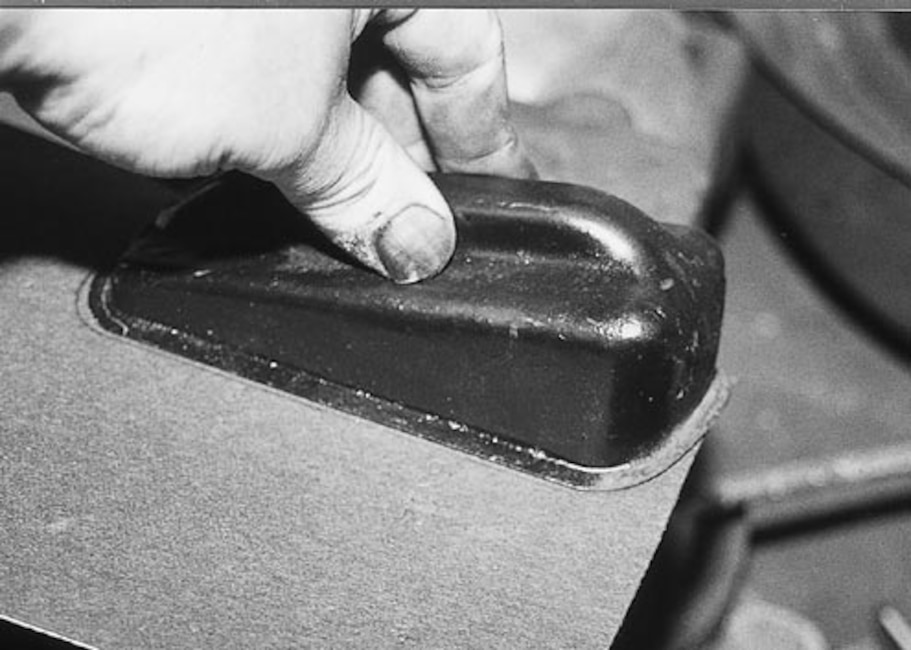 The gasket for the cover was at best a crumbling mess. We had some gasket-making material on hand, so we made our own by setting the cover on a curved surface (our bench vise) and drawing the outline of the cover. We then cut this out—inside and out—using a utility knife. 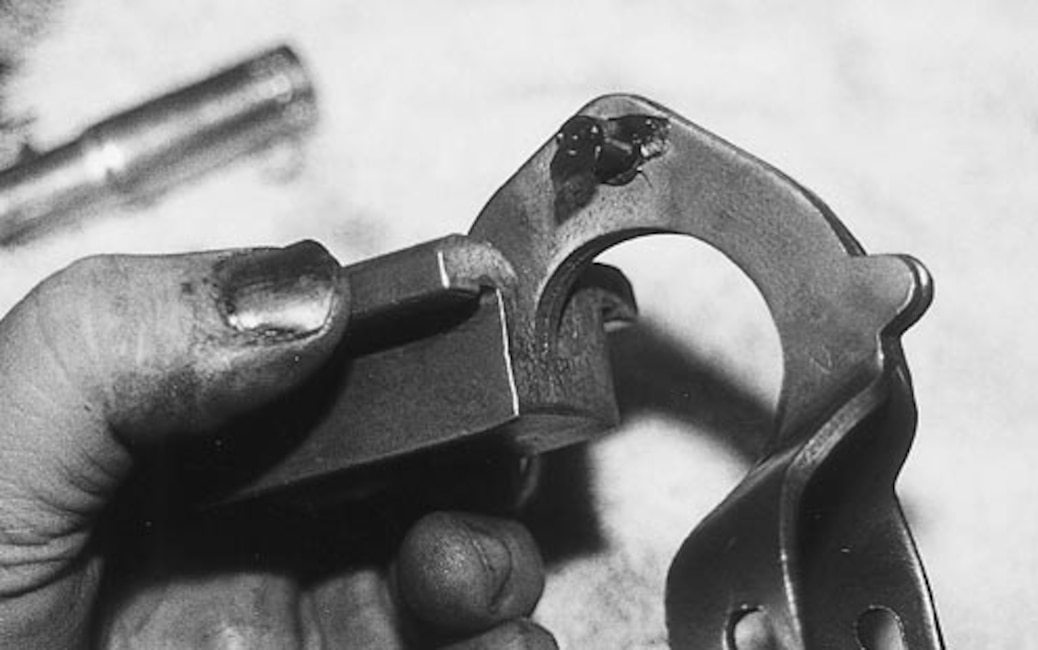 We used some axle grease to make sure that the starter plunger lever would give long service. After we pushed the pin through a final time, the extra grease was removed. 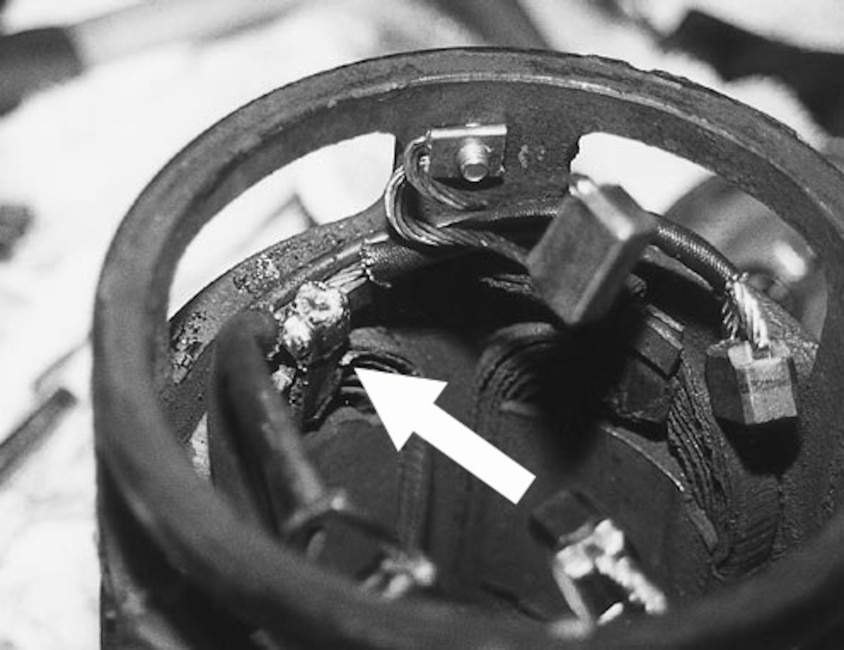 The field coil brushes will need to be soldered to the field coil. You will need a soldering iron that can heat the clip and the copper (arrow). 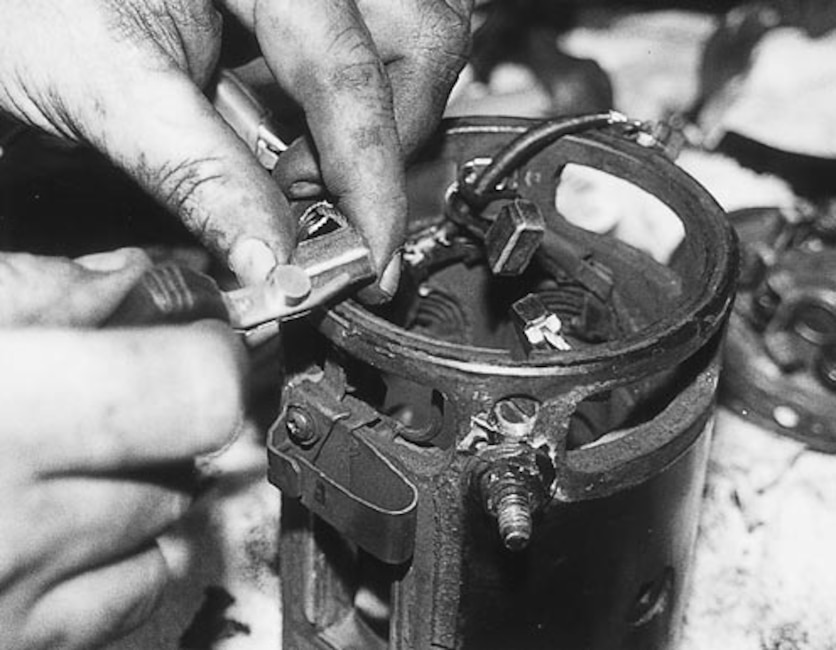 We checked continuity on the brushes after we soldered them to make sure we didn’t mess up anything with the soldering process. 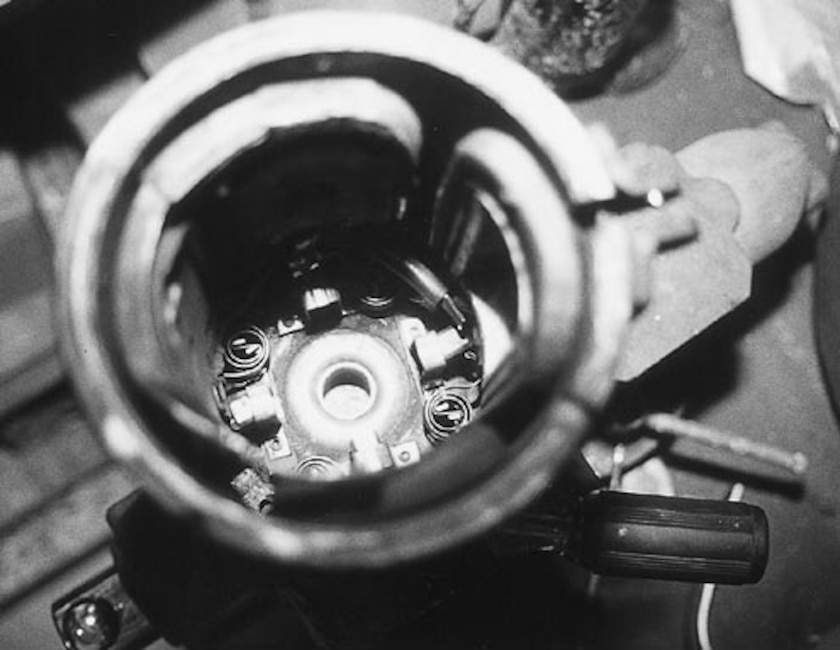 Though it’s a little hard to see here, the brushes are in their holders at an angle. This way, we can stick the armature back into the brush-end plate with little or no frustration. 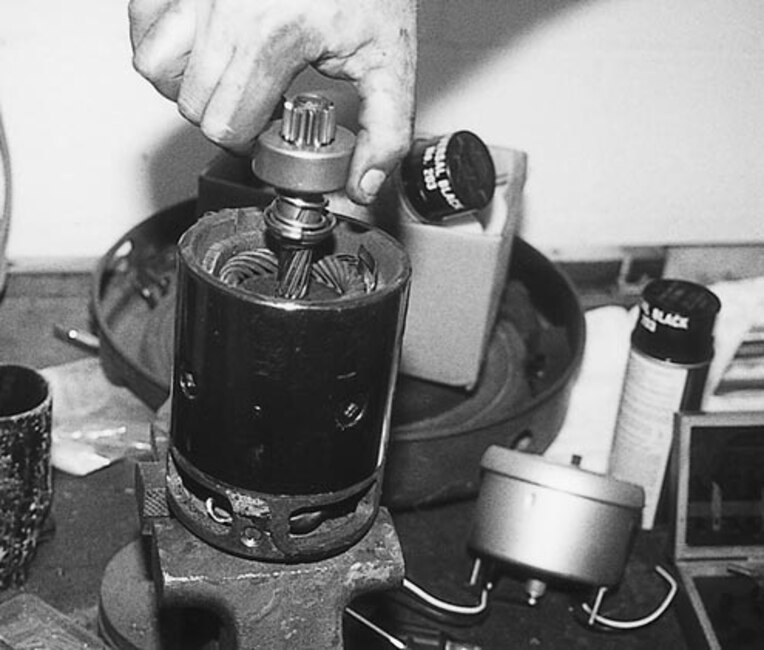 We greased the armature shaft at both ends and carefully set it into the housing. We then put the drive onto the shaft. Next, we put the stop ring (C-clip), the retainer, and the washer on the shaft. We applied a thin film of grease to these items for better wear protection. 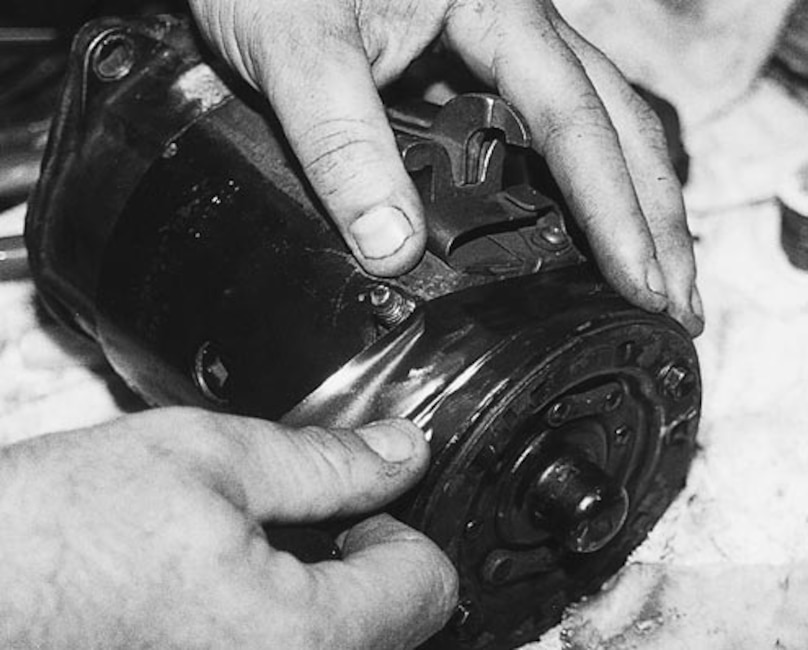 We used high-quality 3/4-inch electrical tape for a vapor barrier to replace the original material that looked similar to masking tape. The excess was trimmed off, and we applied the band clamp. 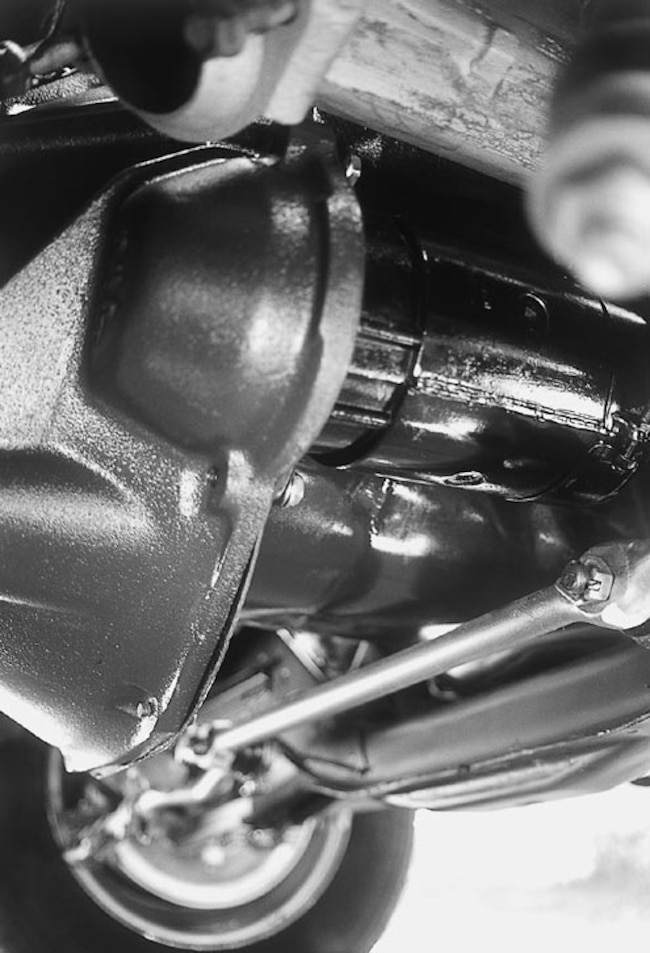 In position and ready to go. The starter was painted gloss black and allowed to dry. We used some of AMK’s excellent cad-plated starter bolts to complete the new look.

It's a blissful Saturday morning--not a cloud in the sky, birds are singing, and you've decided that it's a good day to take the old steed out and stretch its legs a bit. You gather up the keys, the wallet, and the spouse, while heading out to the car. You jump in, hit the key, and you hear an odd zinging noise that's not the normal sweet music of a Ford starter cranking away at the flywheel of your Pony. Just in case it's a fluke, you twist again. Same thing. Not good. Now you're looking at spending the morning--at the very least--removing and replacing the big, heavy black cylinder that makes the engine start. Sigh.

As you pull out the starter, you're startled to see that it's marked with Ford part numbers. Glory of glories, not only does it have the correct part number, but it's also the correct date for your car. Now what? Well, you can do as we did and break open the old thing and find the problem and actually replace all the components therein. Why, you ask? Well, the satisfaction of doing it and the ability to be able to say "I did it." Oh, yeah, it's cheaper than buying a rebuilt one. Now get on down to NAPA and get those parts!