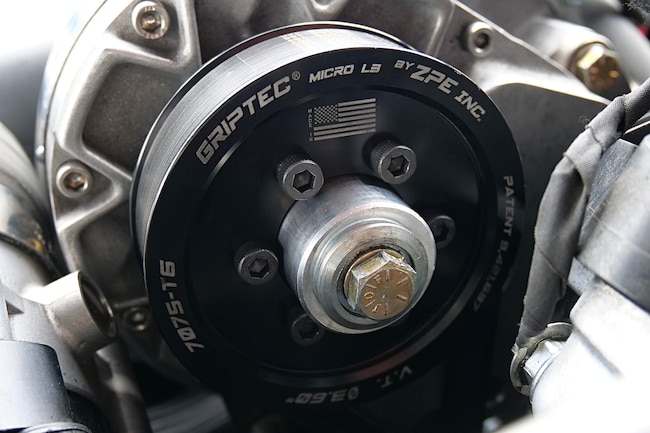 Belt-driven superchargers are a great way to make power, but they require a lot of horsepower to turn—sometimes hundreds of horsepower! That's asking a lot from a lowly serpentine belt originally meant to spin some accessories.

By nature, serpentine belts slip a little when spinning smooth metal pulleys, and the slip increases with RPM. If the belt is spinning an alternator or a water pump, a little slip isn't a big deal. (In fact, some high-end applications slip the belts on purpose to reduce parasitic losses, but that's a whole other story.)

While belt slip for accessories isn't a problem, a slipping supercharger belt not only costs boost (and therefore, power), but slip initiates a vicious circle of friction, heat, and more belt slip. Pretty soon the boost needle drops and the belt is destroyed.

Engineers reduce belt slip by increasing belt surface area or friction between the belt and the pulley. You'll notice higher-boost supercharger systems use wider (more ribs) belt and pulley setups. Aftermarket idler pullies (such as those available for 2003-2004 Cobras) increase the belt wrap around the supercharger pulley, which also increases surface area.

If packaging constraints prevent a wider belt or more belt wrap, increasing the tension on the belt can help. However, increased tension also increases heat (remember the vicious circle?)

Now there's another option: GripTec has developed a pulley surface finish that increases belt friction without adding ribs or belt tension. The secret lies in their "micro ablation" process that adds microscopic "teeth" to the pulley's surface which greatly increases the belt's hold of the pulley. The result is less belt slip, more boost, and more power.

To test this for ourselves, we installed GripTec's pulley and hub system on a 2018 Mustang GT equipped with a Vortech supercharger. Over time, our supercharged S550 abused the belt to where it shredded a rib (oops). The reduced surface area and worn belt slipped so much that we noticed peak boost fell from 9.5 PSI to 8 PSI. That certainly was costing us power.

We can't wait to try a GripTec pulley on higher-boost applications and see how a little friendly friction makes more horsepower.