Adding EFI and a supercharger to our 5.0L dyno mule 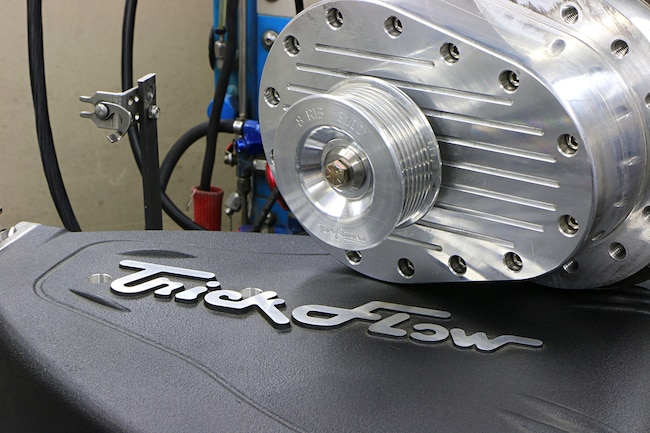 Having run our little 302 Ford previously with carburetion and nitrous, it seemed only natural to apply fuel injection to the 5.0L. After all, the 5.0L was originally equipped with factory fuel injection, so we decided it was time to apply some retro-modern technology to the old gal.

Loyal readers will remember this all got started with what amounts to a stock (rebuilt) 302 short-block—to which we added a set of BluePrint Engines CNC-ported aluminum heads, a Comp XE274HR cam, and a Speedmaster dual-plane induction system. Equipped with headers and a low-buck, 650-cfm Brawler carb, the combination produced 385 hp. This was a sizable gain from the 252 hp produced with the stock heads and cam. After that exercise, we applied a little nitrous in the form of a Sniper kit from NOS. Running a 100hp shot, the Sniper kit jacked the power output up to 495 hp, but we couldn't help but wonder just how much more power this combination had in it. Having applied both bolt-ons and the bottle, there was only one thing left to try—boost!

Before getting to the boost, we had to first finagle the fuel injection. Our thought was that EFI would give us better control of the tune once we added the supercharger. Sure, there are plenty of blow-though carbs running successfully, but we liked fact that the fuel injection ensured even air and fuel flow to each cylinder. To that end, we decided to install one of our favorite fuel-injected street intake manifolds from Trick Flow Specialties (TFS). The TFS StreetBurner intake system features an upper and lower intake section. The long runners were designed to optimize power production below 6,000 rpm, or right where we planned to keep the rpm range of our street 5.0L. The StreetBurner intake combo was combined with a 75mm throttle body from Accufab and a set of Accel 80-lb/hr injectors. Dialing in the air/fuel and timing was a Holley HP management system. Run with the 1 -inch Hooker headers, the injected 302 posted peak numbers of 362 hp at 5,800 rpm and 364 lb-ft of torque at 4,000 rpm. After our naturally aspirated success, it was time for some boost!

Given its responsiveness, and the amount of aftermarket support, producing power with a 5.0L Ford has never been a problem. In fact, the only limiting factor (besides your checkbook) is the structural integrity of the thin-wall 5.0L block itself. Many enthusiasts (including us) have split the stock blocks from the main webbing up to the cam bearing journals. The culprit seems to be torque rather than horsepower production. We have split blocks with turbo systems that produce outrageous mid-range torque values but have been successful making serious peak power numbers as long as we don't get excessive in the torque production. To keep the engine alive and working for thousands of miles, we decided on the linear boost and powerband offered by a centrifugal supercharger. The rising boost curve might not offer the torque production of a turbocharger, but we hoped it would keep our stock block in one piece. To supply said boost, we decided on the easy-to-install TorqStorm supercharger. The TorqStorm supercharger is capable of exceeding 700 hp, so we know it will be more than enough for the needs of our street engine.

Installation of the TorqStorm kit on our engine dyno required a few subtle changes. The first was to space out the crank pulley to miss our Meziere electric water pump. This is not a requirement on stock or aftermarket mechanical water pumps—just for our dyno test. We installed the blower mounting bracket, followed by the crank pulley, and then the supercharger. This was basically all of the major components, as we also decided to run the boost through an air-to-water intercooler from ProCharger. This was something we had from previous testing and we liked the idea of cooling the charge air from any form of boost—even the TorqStorm.

Using different sections of aluminum tubing from our stash, we cobbled together a discharge tube from the intercooler to the throttle body. The custom discharge tube also included a blow-off valve from Turbo Smart. From a previous test, the TorqStorm supercharger was equipped with a 3.1-inch blower pulley. When combined with the supplied crank pulley, the combination produced a peak of 10.2 psi of boost at 6,000 rpm on our combination. After dialing in the air/fuel and timing with the Holley management system (see Graph 2), we were rewarded with peak numbers of 578 hp and 531 lb-ft of torque. Having run a supercharged 5.0L with similar mods for 85,000 miles on the street, we knew this combo would be both fun and effective.

EFI and boost from a TorqStorm supercharger make for a powerful combination.
The 5.0L Ford test engine run in part two featured a Comp cam, CNC-ported 205 heads, and a Speedmaster intake. Run with a small shot of nitrous from NOS, the combination produced just under 500 hp and 500 lb-ft of torque, but we knew this little Ford had even more power waiting to be unleashed.
To get things started, we replaced the Speedmaster dual-plane, carbureted intake with an EFI intake from Trick Flow Specialties. The EFI induction included this lower intake section.
To ensure plenty of fuel flow, we added this set of Accel 80 lb/hr fuel injectors.
The TFS lower intake was combined with this long-runner, StreetBurner upper intake.
The upper and lower intake combo was fed by this 75mm billet throttle body from Accufab. We had to orient it upside down to clear the tall, cast-aluminum valve covers.
Once again, we relied on the MSD billet distributor, though timing and fuel were controlled by a Holley HP EFI system.
Exhaust chores for the injected 5.0L were handled by these 1 -inch, long-tube Hooker headers.
Run on the dyno in naturally aspirated trim, the injected 5.0L Ford produced 362 hp at 5,800 rpm and 364 lb-ft of torque at 4,100 rpm. The injected combo was down slightly compared to the carbureted engine, but we had a cure for the missing power!
We began the installation of the TorqStorm supercharger by bolting the blower mounting bracket in place.
The 50oz damper supplied by Speedmaster required a spacer (not shown) to properly position the crank pulley.
Using .300-inch thick damper spacers, we moved the crank pulley out to clear the bottom of the Meziere electric water pump.
We then bolted the TorqStorm centrifugal supercharger in place using the supplied mounting hardware. Note the manual belt tensioner employed on this set up. Once the 8-rib blower belt was properly adjusted, we never experienced any belt slippage.
From a previous test, this TorqStorm was equipped with a slightly smaller than stock 3.10-inch blower pulley. This worked well since we only ran the engine to 6,000 rpm.
To ensure adequate airflow to the supercharger and keep the heated air from the headers away, we installed this silicone elbow.
To further improve charge cooling, we enlisted the aid of this air-to-water intercooler from ProCharger. The intercooler was fed a constant supply of 85-degree dyno water.
The custom discharge tube connecting the outlet of the intercooler to the throttle body included a Turbo Smart blow-off valve.
Run on the dyno with the TorqStorm supercharger pumping out a peak of 10.2 psi, the supercharged 302 eventually produced peak numbers of 578 hp at 6,000 rpm and 531 lb-ft of torque.

Graph 2: Supercharged 302—Effect of (Perfect) Timing
Though we showed the end result of the dyno testing, we did not arrive at our peak numbers without some tuning. We thought you might like to see how the engine responded to different timing levels, as we generally start out conservative in timing and then work our way up. This also provides information on how well the combination might work at reduced timing levels required on lower-octane fuel. Run first at just 20 degrees of total timing, the supercharged engine produced 494 hp and 468 lb-ft of torque. After first adding 2 degrees, for a total of 22, the power jumped to 521 hp and 485 lb-ft; we dialed it up to 24 degrees and were rewarded with 540 hp and 499 lb-ft. We then tried 26 degrees, which brought 574 hp and 521 lb-ft of torque. The final test involved 27 degrees, which allowed our supercharged motor to produce 578 hp and 531 lb-ft of torque.