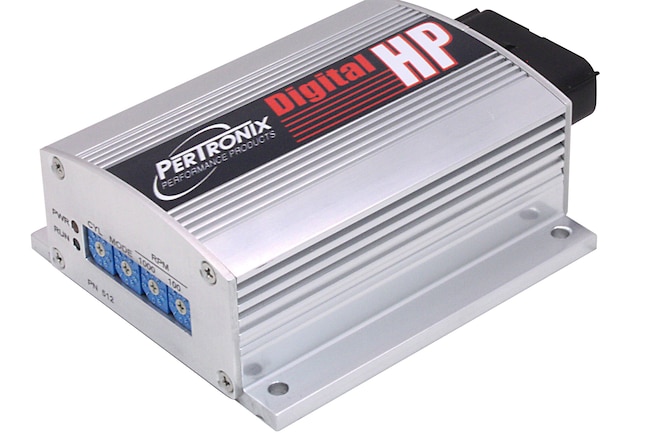 If you’ve been in the classic Mustang hobby for more than about five minutes, you’ve no doubt heard the name Pertronix. The company is a household name in our hobby for its line of Ignitor brand electronic ignition conversion kits for the Mustang’s original points ignition found in the stock distributor. From inline-six and small-block to the big-block Mustangs (and every other Ford or Brand X in your driveway) there’s a Pertronix Ignitor solution available. They’re quick and easy to install, and they are a “set-and-forget” setup with no wearing/moving parts, unlike those old points systems.

As much as we love recommending the Ignitor (and we have one in our ’66 Mustang as well), the Ignitor is simply a “trigger” for the ignition coil. Upgrading the coil—naturally, Pertronix has solutions available for you there too—certainly helps, but for a higher-performing engine package (compression, hotter cam, aftermarket heads, etc.), a full ignition upgrade with more spark energy, a rev limiter, and other features is something to consider. Pertronix has offered ignition “box” solutions in the past, but its latest, the Digital HP, really takes things to the next level in a compact size that fits any engine compartment.

The Digital HP is offered in black and silver case finishes, so you can let it blend in or stand out, depending upon how your engine bay looks. The Digital HP is small (about one third of the size of a traditional ignition box), but it packs a punch with a feature set that’ll help keep your engine safe on the street and the track. The Digital HP provides more than 187 Millijoules of spark energy, and that energy is delivered in multiple sparks all the way to redline. Speaking of redline, the Digital HP keeps your engine in one piece with its three-step digital rev limiter. The rev limiter can function for burnout and/or launch control (via owner supplied momentary switches), as well as for max rpm for engine protection. If your engine requires timing retard for easier starts, the Digital HP has you covered there as well, and it also features an rpm-triggered output (say for a shift light), tachometer output, diagnostic LEDs, and more. Lastly, this little wonder is 50-state legal too!

We grabbed a friend’s ’68 fastback that was already running a Pertronix Ignitor along with a wide-cap adapter kit for this upgrade. We’re going to add the Digital HP in silver along with Pertronix’s Flame-Thrower HP E-core ignition coil and 8mm MagX2 universal plug wire kit. We’ll use Pertronix’s new plug wire stripper and crimper tools to build a custom set of plug wires for the small-block. Take a look and then give Pertronix a shout for your ignition needs.