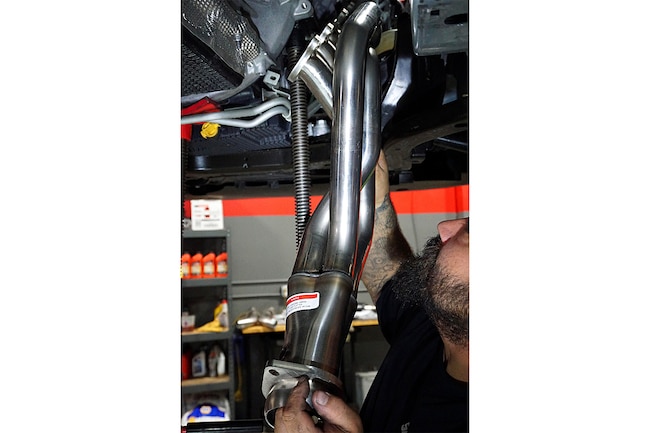 So there are plenty of companies out there who tout that their bolt on products can generate a lot of power. But often the reality is that those power gains come at a price with additional modifications required or drivability sacrificed to get to the goal line. In our testing, we were very pleased to discover that the installation of our Kooks complete exhaust system, which included their “Ultra High performance Green Catalytic Converters,” generated as much as 55 horsepower before tuning. For those who are new to the bolt on game, that is quite a lot.

The Kooks system includes their very shapely exhaust header design that is a one-piece unit in contrast to some header packages that feature individual header tubes that are slipped together to form a complete header. In this case, the header (the section of tubing that bolts to the cylinder head and forms a flange to connect to the rest of the exhaust system) is made from high quality 304 stainless steel in its entirety. For that reason, it will not rust with age and is guaranteed for life. We can tell you, from a visit to their facility in Statesville, North Carolina, that these headers fit because great care has been taken to make each piece exactly to specification.

The design of the header is key to releasing the hidden horsepower found in our Coyote engine. Our 2018 Mustang was slightly different from previous S550 Mustangs (2015 -17) but much of what we experienced here is pertinent to those earlier models and the 2019 model year as well. For anyone who has dealt with header design, the key to creating more engine power is more than just increasing the side of the tubing diameter over the stock header package. Our factory Mustang exhaust was not bad in comparison to many other factory muscle car systems, but it was hampered in some areas because the factory narrowed down the tubing to clear engine bay components. In addition, the Kooks’ scavenger collector design is responsible for significant flow enhancement as is the collector spike (visible when looking into the collector) that adds in airflow efficiency.

The complete kit also includes the rest of the 304-stainless steel tubing, mufflers, catalytic converters, clamps and exhaust tips to dress out the system in the most efficient way. The proper installation of the mid-tubes and other component was laid out clearly in the nicely detailed Kooks instructions, but just know that once the headers are in, the rest of the installation is very easy.

So lets cut to the chase, our Kooks complete exhaust system generated as much as 55 additional horsepower at 3400 rpm before tuning using the Kook exhaust system and “Ultra High Performance Green Catalytic” converters. That is huge power for a bolt on. Note that we did not call it simple – and that’s for good reason.
For those who tout themselves as a decently adept mechanic, your skills could be highly tested when installing the header portion of this exhaust. Among the challenges we encountered during our installation were jacking up the engine and removing both engine motor mounts. Other vehicle components that are dislodged in this process include the battery, air intake system, steering link and starter, and that’s just to be able to remove the factory exhaust headers.

In the end, as our dyno proved, the peak Rear Wheel Horsepower (RWHP) improved from 415.22 RWHP to 440.46 RWHP and Rear Wheel Torque improved from 392.97 lb. ft. of torque to 416.57 lb. ft. What was most incredible were the performance gains in the mid range, an incredible 55.05 RWHP at 3400rpm – right in the sweet spot where you are going to feel it the most when accelerating. While not everyone can take advantage of this upgrade (several states including California do NOT allow the installation of long tube headers on late model Mustangs – check with your local regulations before making this swap) those that can will find the benefits to be very impressive.

Best of all, as performance fans have known for years, installing a set of headers is the first step on the list performance upgrades that allows you to garner the most from additional upgrades like superchargers and intake systems. To install a power adder without opening up the exhaust with a header system for improved engine efficiency is not getting all the power they deserve.

And don’t you deserve all that power?