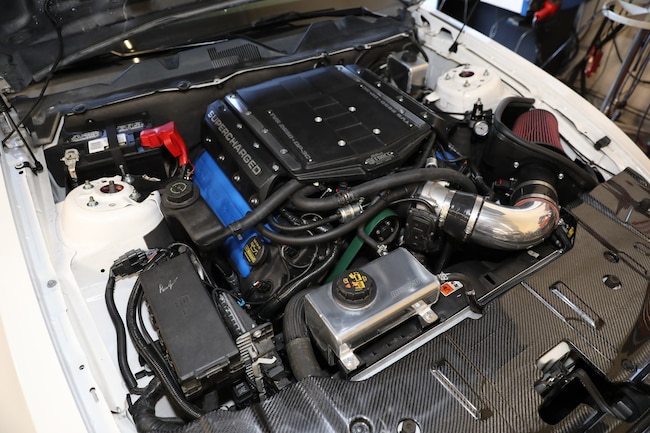 It’s always fun being the first to try something new, especially when it’s a power adder! There’s no lack of power adders available on the market when it comes to S197 Coyote-powered Mustangs, but there’s one currently available for only the S550, and that’s an Edelbrock E-Force 2650 supercharger. Well, we are about to change that with an installation on a 2013 BOSS 302.

Edelbrock has done a fantastic job engineering superchargers that look like they came from the factory. The kit comes with an independent heat exchanger and molded lines, low-profile surge tank, and a high-quality intercooler. The self-contained oil system has an 100,000 mile service interval (no drilling or plumbing required).

There are several superchargers on the market that use Eaton’s potent 2650 rotor group, but that’s only the preverbal brush; supercharger companies still need to paint a synchronous package around them. Edelbrock’s take is a greatly improved DP-3C (dual pass, three core) intercooler fitted to long runners to preserve low-end torque. The supercharger draws in air from the valley mounted throttle-body (adaptor available for the Ford Racing oval throttle-body), pushes up through the intercooler, and once it hits the lid, makes a turn down through the intercooler once more before entering the runners. This resulted in intake air temperatures of only 135 degrees!

Edelbrock’s 2300 supercharger was a great supercharger, but the new 2650 is light years ahead of the smaller blower. Edelbrock’s take is a greatly improved DP-3C (dual pass, three core) intercooler fitted to long runners to preserve low-end torque.

Our hybrid kit was essentially everything from Edelbrock’s 2011-2014 E-Force 2300 kit with the S550 2650 supercharger added. Our BOSS 302 features a fully built F150 with 10.5:1 compression and Comp NSR blower camshafts. With a potent combination on hand, we went straight to Edelbrock’s 8-rib upgrade that included a new billet bracket, damper with oversized blower drive, and a 3.75-inch supercharger pulley, which is the biggest the 8-rib kit will fit.

Edelbrock starts their new S550 package out in a Stage 1 configuration. This CARB compliant, 50-state legal kit will produce a claimed 690hp and 588 lb-ft of torque. This is accomplished with an Edelbrock tune, injector upgrade, and the stock airbox. Feeling frisky? The non-CARB compliant Stage 2 kit includes a competition air inlet and bumps power to 731hp. All kits come with a high capacity heat exchanger, molded lines, intercooler pump, intake system, and fuel rails. There’s really not a lot to the system and only requires a minor modification to the radiator ducting to run the intercooler line.

All business from the back! The intake air temperature signal is relocated from the mass air flow sensor via a plug and play harness. The sensor is after the second pass through the intercooler as it heads to the valve. This means the PCM can work off the most accurate intake temperatures. Symmetrically drilled is a 1/8-inch NPT port that can be used for boost reference.
An included drill bit and tap adds an additional hole required for the pulley’s mounting plate. We used electrical tape to limit the travel of the bit. New bolts and billet spacers will replace existing front cover and water pump bolts.
To be honest, we went straight to Edelbrock’s 8-rib upgrade because we thought we’d need a really small blower pulley to make a lot of power…boy were we wrong. The 8-rib upgrade includes all new pulleys, different pulley mounting plate, and a 20% overdrive SFI approved damper. An idler replaces the factory tensioner. A 2014-2018 3-bolt water pump is required and is a direct replacement for 2011-2013 4-bolt pumps.
Use a cut off wheel to remove these useless tabs from the intake manifold so it can clear the fuel rails.
Edelbrock machined provisions for both the 2011-2014 and 15+ intake manifold gaskets, so simply clean and transfer them to the Edelbrock supercharger.
Billet fuel rails are included from Edelbrock and retainer clips keep the injector spaced properly. Not using these clips could result in the rail improperly feeding the injector.
The 15+ Mustangs use a squared off intake manifold flange, whereas the 2011-2014 cars are rounded. We opted to massage the water outlet but the same could be done to the supercharger’s intake flange on the front, driver’s side cylinder. Oh, make sure you get some help installing the supercharger…it’s heavy!
The 2650 supercharger has an increased radius that places it more in line with the air intake. Due to this, we needed to extend the throttle-body harness slightly. More slack can be gained by removing the old electrical tape and re-wrapping.
Working with the S197 Coyote accessories coupled with the 2650 supercharger, we were able to get almost everything to work. Our only need was a 180-degree radius coolant line with a hose barb coupler. The S197 2300 E-Force uses a driver’s side intercooler outlet, so this helped bridge the gap.
The purge valve must be connected to the hose before bolting it in place. There’s not enough clearance to the supercharger’s lid to attach it after the fact.
The 2011-2014 heat exchanger, water pump, and intercooler reservoir all bolt in place as they should. A simple 3/4-inch hole is drilled into the radiator side shroud for the reservoir’s feed line. A plug and play harness intersects the EVAP harness and will turn the intercooler pump on once the key is in the run position.
With the increased radius of the throttle body position we needed to adapt the air intake to the throttle-body. A simple J-bend was cut down slightly and we added a hole for the crankcase vent. Worked like a charm!
We then headed to Westech Performance to see how much power we could make!
Eddie Rios of Addiction Motorsports normally handles tuning at his facility but was at Westech to help us with some engine dyno testing on a 2018 Coyote crate engine as well. Two engines, one tuner.
We were astounded by the results. The Edelbrock 2650 certainty gets things done! We made a whopping 834.8 horsepower and a neck snapping 711.7 lb-ft of torque on only 13 psi of boost. This was accomplished on pump gas E85 and a conservative 21 degrees of timing. Edelbrock notes a 50hp gain when upgrading from the stock to Ford Racing throttle-body. We are running on what we would consider the max “safe zone” for a stock sleeved Coyote with a built motor.
Let’s not forget that we stuck with the largest, 3.75-inch supercharger pulley. Working down in size and using Ford Racing throttle-body, there’s no doubt we could have made well over 900 rwhp!