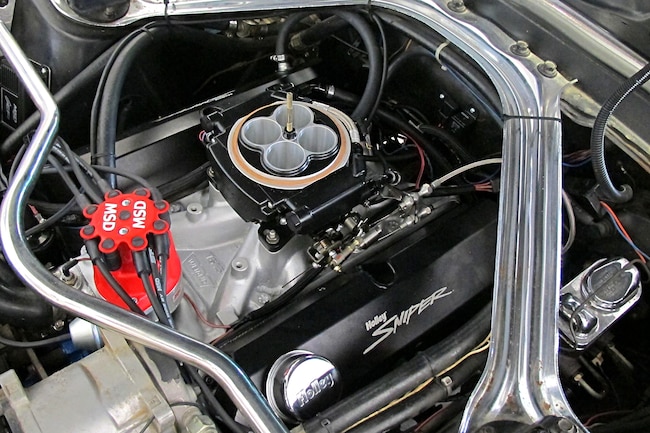 When factory electronic fuel injection (EFI) first hit the Mustang in the 1980s, many enthusiasts felt it would be the death knell for performance. Little did any of us know at that time that there was really nothing to worry about, and that we’d have Mustangs today rolling off the assembly line in excess of 400 horsepower (and more for specialty models like the supercharged Shelby GT500s from 2007-2013). Sure there were some problems early on as owners and the performance aftermarket figured out these OE systems and how to get the most out of them, and the same can be said for aftermarket bolt-on EFI solutions.

Over the years, the options to convert your carbureted engine to EFI have been many. From using the intake, injectors, wiring, and sensors from the ’87-’93 Fox Mustang to early throttle-body injection (TBI) units based off of GM truck units, there always seemed to be teething problems and a learning curve. However, over the last five years or so the bolt-on EFI game has really entered the next chapter, if you will, allowing anyone with basic mechanical abilities to be able to enjoy the benefits of modern fuel injection on their classic Mustang.

The aftermarket systems have matured with well-designed aluminum throttle bodies that directly and easily replace your 4150/4160 flange carburetor (if you’re using a stock Ford Autolite 2100/4100 carb and manifold we suggest upgrading to an aluminum intake with your EFI swap) and easy-to-integrate wiring with often less than six wires to connect! Meanwhile, the most important advancements have been wideband oxygen sensor integration and onboard tuning (either via a wired touchscreen or a Bluetooth connection to a small tablet).

The wideband sensor allows for “self-tuning” functionality, taking a lot of the guess work and frustration out of tuning the system, especially for your typical street engine combination. Originally a sensor found only on high-end exotic cars and in expensive race-oriented EFI systems, wideband sensors are now used in most OE applications, including the current-generation Mustang. Couple that fast-acting input with some basic parameters set up during the initial power-up of the system, and most cars run great right out of the box. More radical camshafts, power-adders, and other upgrades will often require a bit more hands-on tuning; it’s just the nature of the beast.

The Holley Sniper EFI system is a complete bolt-on EFI solution. All you have to do is supply an EFI-capable fuel system, which Holley can help you with as well. Included in the Sniper 4150 Self-Tuning EFI kit is its cast throttle body (available in black, gold, or polished finishes), wideband O2 sensor, handheld touchscreen controller, and all necessary wiring—PN 550-511 is shown.

Over the last 10 years or so we’ve installed all manner of EFI conversion systems, several of them from Holley and its sister brands. Watching the progression of these systems has been nothing short of amazing, and that goes for supporting products like fuel system plumbing, fuel pumps, and the like. Gone are the days of poking your fingers with braided stainless fuel hose and trying to find a spot to mount a fuel pump low enough on a framerail to actually receive fuel from the tank. Today we have push-on hose and fittings that are simple to route and terminate and drop-in fuel tanks with EFI pumps in them. All of this makes for an easier installation and user experience.

Today we’re upgrading a friend’s 1968 Mustang hardtop with Holley’s latest, its Sniper EFI system. The Sniper system features a cast throttle body with integrated ECU, four 100 lb/hr injectors, OEM-style throttle position sensor, idle air control solenoid, and fuel pressure regulator. Simply bolt it down in place of where your carburetor used to reside on your manifold and half the job is already done! No external ECU box or fuel pressure regulator to mount. The base kit also features a pre-terminated wiring harness with just four basic connections to make (battery positive and negative, ignition switch, and rpm) and a genuine Bosch wideband oxygen sensor for fuel-map learning with a trick no-weld oxygen sensor mounting solution as well. Lastly, Holley adds a user-friendly touchscreen interface with an easy-to-understand “wizard” interface, yet the system can be custom-tuned via laptop and a CAN/USB adapter if preferred. The system has built-in timing control if so desired, can control cooling fans, and has additional output options while offering users data logging capabilities as well. All this in a system starting at just under a thousand dollars!

If you’re at all familiar with the late-’80s to early-’90s Mustang EFI systems, you’ll know that Ford provided a small check valve you could screw a fuel pressure gauge to in order to verify fuel rail pressure. When upgrading to an aftermarket EFI solution, generally it is common practice to install a fuel pressure gauge in the external fuel pressure regulator so you can set your fuel pressure manually on the regulator. With these throttle body–based systems like the Holley Sniper setup you see here, the fuel pressure regulator is built into the unit and is pre-set from the factory, so why would you need a fuel pressure gauge? Right off the top of our head, the quick answer is to verify fuel pressure from your fuel pump, but it can also be used as a diagnostic tool to show a weak pump, restricted filter, damaged/crushed fuel line, etc. Earl’s offers liquid-filled fuel gauges in both carbureted and EFI ranges (we grabbed the 0-100 EFI, PN 100187ERL) and this nifty AN -6 gauge adapter, PN AT100199ERL. Using the gauge adapter we can easily install the pressure gauge inline between the supply line and the throttle body for initial startup and testing, and then remove it and store it in our toolbox for future projects or EFI system diagnostics.