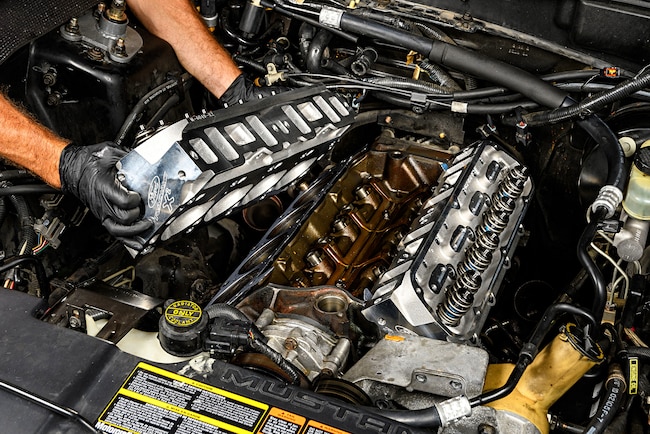 When Ford Performance Parts introduced their new “X2” aluminum cylinder heads for small-block Fords, we knew they would be perfect for our 1995 Mustang GT project. Why?

Sold as part number M-6049-X2, the cylinder heads are cast from all-new tooling. They’re a bolt-on replacement for the factory cylinder heads on most late-model 302s that feature better-flowing intake and exhaust ports, larger valves, ovate beehive valve springs, and a modern combustion chamber design. The X2 heads accommodate cams with up to up to 0.600-inch valve lift and are twenty-five pounds lighter per head than our production heads. That’s a full fifty pounds off our Mustang’s front wheels!

Besides weighting half that of the cast iron heads, the X2 cylinder heads are also lighter on our wallet. Since X2 heads utilize the factory bolt-down rocker arms, we didn’t have to buy stud-mount rockers, guide plates, hardened pushrods, and bigger valve covers.

It would be a crime to choke the Ford Performance X2 heads with the stock intake manifold, so we chose Holley’s venerable SysteMAX intake manifold instead. We opted for Holley’s new black powder coat finish (PN 300-72BK) for visual twist on this old favorite. Holley sent along a set of 30 lb/hr fuel injectors to complement our engine’s new power potential.

We could’ve attached the throttle-body to the intake manifold Fox-body style, but we wanted to retain our cruise control and emissions equipment. A throttle-body adapter from Trick Flow Specialties put our throttle body in the right spot and bolted up to our factory EGR system.

After all the parts were bolted up and the engine running, we took it to Delk Performance in Lebanon, Tennessee for a few finishing touches and a tune. Brent Delk is one of the few that burns chips for old-school cars like ours. (Today, tuners plug into the OBD-II port to tune the engine control unit. But, our 1995 GT is the last year of the EEC-IV, which requires an actual chip to be programmed and plugged into the ECU before each tune takes effect.)

Delk added an 90mm SCT Big Air mass air flow sensor that he tuned with our Holley 30 lb/hr injectors on their in-house Mustang chassis dynamometer. The result was a very respectable 274 horsepower and 310 lb-ft of torque to the wheels. Besides being 67 horsepower and 47 lb-ft more than our previous best, these numbers were through the stock AODE transmission and with all the factory emissions equipment in place, including the stock H-pipe. We’ll take that all day long.

Delk also modified the automatic transmission’s shift strategy, programmed the cooling fan to come on sooner with our 180-degree thermostat, and raised the rev limiter.

With the newfound power from our Ford Performance Parts X2 heads and SysteMAX intake, our 1995 GT is a hoot to drive. The reprogrammed AODE shifts later, harder, and the converter only locks up in overdrive. While the stock heads and intake ran out of steam at 5,000 rpm, this new combination pulls hard to 6,000 rpm.

We combined Ford Performance Parts’ new X2 cylinder heads, gaskets, bolts, and a Trick Flow throttle body adapter to add 67 horsepower and 47 lb-ft of torque at our 1995 Mustang GT’s rear wheels.
Ford Performance Parts’ X2 aluminum cylinder heads are direct replacements for our stock heads, but breath better and shed fifty pounds off our Mustang’s nose.
Ford’s X2 heads fit 1.94-inch intake and 1.54-inch exhaust valves inside a revised 64cc combustion chamber.
Trick PAC 1219X ovate beehive valve springs are retained by 10-degree locks and steel valve spring retainers. These beehive springs reduce mass at the valve tip to increase the rpm range and damp the spring’s natural frequency for durability.
To ensure our X2 heads weren’t starved for air, we chose Holley’s venerable SysteMAX intake manifold in their new black powder coat finish.
Here’s the problem: on 1994-1995 cars, the alternator hangs over the valve cover, prevents stud mount rockers and the requisite valve covers. Sure, we could’ve massaged a few things, but Ford’s X2 heads avoided the hassle.
We started by draining the coolant and removing the front accessory drive components.
Next, we removed the distributor.
Then, we removed the stock upper and lower intake manifold.
After removing the head bolts, we pulled off the heavy cast iron cylinder heads.
Compared to the stock heads (left), the Ford Performance Parts X2 head’s intake ports are considerably more voluminous.
On the exhaust side, the ports on the X2 heads (right) are fatter than the stock heads (left). The wide ports are consistent with current cylinder head technology.
After thoroughly cleaning the block’s deck surface, we reinstalled the dowel pins and laid the head gaskets into position.
We torqued the new Ford head bolts in the required pattern and sequence. The OEM Ford head bolts are torque-to-yield, which means they are tightened to their yield limit, and cannot be reused.
After applying a little assembly lube on the wear surfaces, we reused the factory bolt-down rocker arms and pushrods. Fortunately, the factory push rods gave us the desired lifter preload we were after.
Though the cylinder head port size differences between the stock and X2 heads were subtle, the intake port sizes between the stock (left) and Holley SysteMAX (right) were significant.
After lubing the O-rings with engine oil, we inserted the Holley 30 lb/hr injectors into the Holley SysteMAX lower intake.
With the lower intake prepped and new intake gaskets in place, we lowered the intake onto the block and torqued the intake bolts to specification.
Next, we grabbed a set of Mr. Gasket exhaust gaskets and reinstalled the headers.
The SysteMAX intake’s design requires a combination of studs and bolts. We installed the studs in the locations shown using thread locker and two nuts.
With a gasket in place, we installed the upper intake manifold.
After the upper intake was bolted down, we installed the Trick Flow throttle-body adapter, which has provisions for the factory EGR valve and throttle cable bracket.
Next, we installed a 70mm throttle-body.
The Ford X2 heads use 7/16-14 threads to secure the accessory drives on both sides, so we drilled two of the holes on the alternator/air pump bracket to accommodate the larger bolts.
The Fox-body intake rubbed on the hood’s insulation panel on our SN95 chassis, but removing the panel solved the problem.
The black SysteMAX intake looks right at home in our black SN95’s engine bay.
We took our 1995 GT to Delk Performance in Lebanon, Tennessee to for tuning with our new Holley 30 lb/hr injectors. Brent Delk is one of the few tuners left with the equipment and know-how to tweak old cars like ours.
Brent Delk installed a 90mm SCT Big Air mass air flow and tuned the car on their in-house Mustang dynamometer. The GT made 274 horsepower and 310 lb-ft of torque through the restrictive factory H-pipe and stock AODE transmission. Besides being 67 horsepower and 47 lb-ft more than our previous best, the trans shifts later and firmer, making the car a hoot to drive.