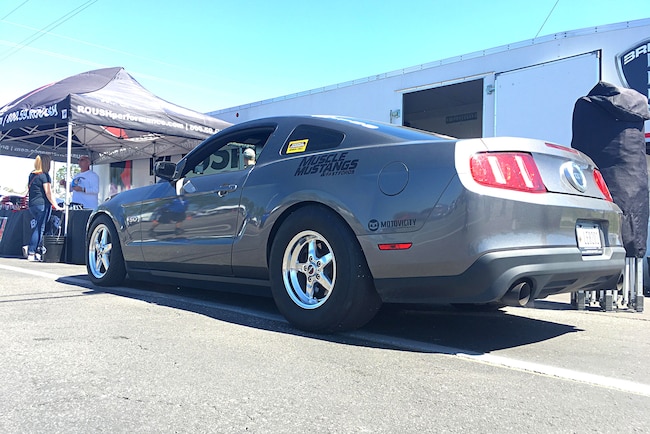 When it comes to our Mustangs, there’s no such thing as too much power. We buy a Mustang, modify it, and are happy with it for a while. However, there’s not a Mustang enthusiast alive that has ever said he/she doesn’t want more power, quicker elapsed times, or faster top speeds. We might be happy for a minute, but it’s not long before we want more.

In the case of Brenspeed and its High-Mileage Coyote, Brent White and the crew took a 160,000-mile 2011 Mustang GT, performed all necessary mechanical health tests, replaced all the normal wear items, and built it back up from there. Brenspeed rescued the car using components from Ford Performance, Strange Engineering, Kooks, Afco, BMR Suspension, and Meziere. Thanks to these additions, the well-used Coyote was good for over 400rwhp.

Taking it to the track in this installment, the High-Mileage Coyote put that horsepower to use by running low-11s in the quarter-mile. While those times are very respectable for a street car, Brenspeed’s primary use for the car takes place at a dragstrip, so of course, quicker times were required. To that end, the star of the performance show is a Zex Blackout nitrous system.

To see how Brent and the Brenspeed team did on the spray, you’ll have to keep reading.

By now with Brenspeed’s High-Mileage Coyote build, many of these boxes have been emptied and the parts installed on the car. With the wheels and tires, torque converter, driveshaft, and rearend yet to be upgraded, these were last on the list. However, Brenspeed’s Brent White also wanted to make more power and reduce elapsed times. To that end, he added nitrous to make that happen.
Starting from the front, Brenspeed added a Circle D stall converter. Specifically, Brent added a 4,000-4,200 rpm stall converter since the High-Mileage Coyote is destined more for track duty. If the car was more for regular street duty, the stall speed wouldn’t be as high. Brent likes a 3,600-3,800 rpm stall converter for a street car.
The Circle D triple disc converter is CNC-machined and made in America. It features a furnace-brazed, TIG-welded construction, including lightweight components to get the High-Mileage Coyote out of the hole at a more rapid pace.
After buttoning up the car’s 6R80 transmission, Brenspeed turns its attention to the car’s 8.8 rearend. With as many miles were on the High-Mileage Coyote, and the fact that most people never ever think about changing their car’s rearend fluid, Brent knew he had to remove the rear cover to check out things. He had ulterior motives, as well, because many of the stock components are going in the garbage…
…And being replaced with these shiny new pieces. Brenspeed added a Ford Performance differential with carbon fiber clutch packs, 4.10 gears, and a one-piece aluminum driveshaft. The crew followed up the Ford Performance components with Strange Engineering axles, a JMS Chip LaunchMax, and an MSD Two-Step. With over 160,000 miles on the car, even if they were well taken care of, replacing the rearend components were a necessity.
To get the most out of the performance upgrades, Brent chose Race Star 92 Series polished wheels wrapped in Mickey Thompson ET Street Radial Pro tires out back. Brenspeed uses a 15x10 wheel with a 275/60 in the rear, while a 17-inch wheel is up front with a Mickey Thompson 26x6x17 front tire. Before it was all said and done, Brent changed over to Race Star’s Dark Star series to give the car a more menacing appearance.
With the newfound traction, Brent knew he needed a variety of components to make the most from the starting line grip. To that end, he added the MSD Two-Step with a JMS LaunchMax so he could choose the launch RPM best suited to their combination. The JMS LaunchMax works with the MSD Two-Step and Circle D converter to reach optimum launch rpm to get the car out of the hole with the right combination of wheel speed and traction. The JMS LaunchMax is a transbrake for the car’s 6R80 automatic transmission, which allows Brent to launch the car using a button. The LaunchMax was a Plug-and-Play upgrade for the car, which makes installation a snap, literally.
When the car made its track debut in March of 2017, Brent was blown away when the car ran an 11.30 at 120 mph. He launched at 2,700 rpm and the car dead-hooked. Brent tried varying up the launch rpm, but 2,700 was the car’s happy place, as it reacted with a 1.54 60-ft time.
As a racer, Brent wasn’t happy with low-11s and wanted more. “It was time for nitrous,” Brent says. Brent chose a Zex Blackout 150hp nitrous system that came with everything needed to install it on the car, including a bottle heater and blow down tube. Should the bottle pressure ever get to high, the blow down tube will vent the nitrous outside.
The Zex Blackout nitrous system uses a power point arming switch, which makes the nitrous system very easy to install. With the Zex kit engaged, the High-Mileage Coyote made 566 horsepower at the wheels. That number is up from the 409 horsepower it made on the motor alone.
Brent wanted a little privacy for the High-Mileage Coyote’s Zex nitrous system, so he mounted the nitrous/fuel nozzle on the underside of the car’s air intake. Back at the track with the Zex nitrous, the car responded with a 10.46 at 128 mph and a 1.39 short time. What’s next? Only time will tell, but this High-Mileage Coyote has proven that it’s perfectly suited for it’s second life as a dedicated track ride.