Vortech’s Newest Kit For 2018 Mustangs Will Push Your Pony To Nearly 700HP! 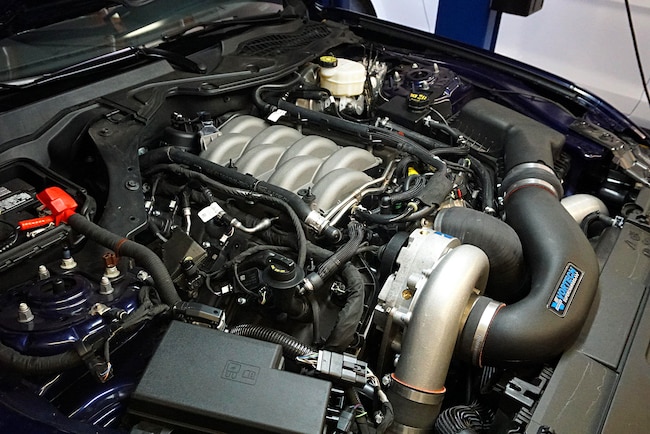 Your basic 2018 Mustang GT is an awesome package right off the showroom floor. With 460 horsepower and 420 lb-ft of torque, its more than happy smoking the tires at the discretion of the driver. But with anything “performance,” enough of a good thing is never enough and adding more horsepower is just part of the natural plan.

For 2018, the Mustang underwent a few design changes that are more than grille-deep. Most significantly to aftermarket supercharger builders such as Vortech, the Mustang’s more slanted nose section caused them to re-engineer their systems so that all of the working parts stay under the stock hood. At the time of this writing, the Executive Order showing full compliance with 50-state emissions was under review but since approval currently exists for the 2015-2017 Ford Mustang kit from Vortech – we bet this one will pass as well.

Vortech’s newest version of the Mustang GT H.O. Tuner Kit boosts the horsepower output of the factory GT engine by 50%, that’s a wake up call that most Ford fans will celebrate. With a price of just under $6,000 for complete kit, this modification adds somewhere over 200 horsepower to the already-potent Coyote 5.0L engine. The total installation takes between 8 and 10 hours to complete, meaning it can easily be performed in one weekend by a fairly competent and very enthusiastic mechanic.

At the heart of Vortech’s newest kit is the brand new V-3 JT supercharger that is self-oiling so there is no need to tap into engine oil to lubricate the unit. The Vortech systems for the 2018 GT are available in three finishes, satin, polished and black, allowing you to “tune” for your personal taste in underhood appearance.

Regardless of the finish you select, the brackets used to mount the supercharger are made from a combination of steel and aluminum billet that mount to the engine via bosses already located in the block. The Vortech system is perfectly designed to fill the space between the block and the radiator support within the original engine compartment. The void was virtually begging for a supercharger system and the engineers at Vortech happily obliged.

The kit comes with a 3.6-inch drive pulley that will deliver between 7.5 and 8.5 psi – perfect for terrific on street manners but will not hurt the reliability of the factory original powertrain. Vortech notes that through a swap out of pulleys and other key parts, much higher horsepower output is easily possible – only limited by the critical driveline pieces on the Mustang itself. The 3- and 3.5-inch mandrel bent inlet and outlet tubing are made from high quality aluminum for high flow and low weight. Through the use of multiple position idler locations, different pulley and belt modifications are possible.

One of the keys to the big power output of the Vortech system is the air to air charge cooler that features a straight through design and when combined with the 98mm MAF housing that’s designed for blow through use. The kit also modifies the factory air filter box and incorporates a new radiator overflow tank that looks like an OE unit.

The following is a quick overview of the key steps involved in the installation of a Vortech supercharger system on our 2018 Mustang and not the full picture. Please note that the full Vortech instruction manual contains over 100 full color images and over 60 pages of instructions detailing every step of the installation. For those with the skill and drive – and the time to dedicate a weekend to drive their factory Mustang’s output to close to 700 ready ponies – Vortech has a plan for you they think you’ll love.

1. The Vortech 2018 Mustang H.O. Tuner kit installs neatly in a void left by the Ford factory engineering team when they built the newest edition of Mustang. The Vortech V-3 JT supercharger fits without need of any major modification short of changing the angle of the radiator slightly to provide enough room for the supercharger, intake tubing and pulleys.

2. The kit includes everything you see here including the supercharger, all inlet and outlet tubing, remote radiator flow tank and all important and highly efficient air-to-air charge cooler that keeps intake temperatures low for improved horsepower by providing a cooler, denser air/fuel mixture to the cylinders.

3. The Vortech engineering team did a masterful job creating a kit that could be installed in a weekend. In the name of efficiency and to create a kit that is affordable to a large number of buyers, Vortech determined what parts from the Ford could be reused with the installation such as the factory air filter box which mounts in the same location after the supercharger has been installed.

4. After draining all of the engine coolant, the drive belt was removed by taking the tension out of the idler and slipping the belt off the pulley.

5. Remove the pop bolts that line the perimeter of the top panel cover to allow access to the radiator brackets and release the front fascia.

6. These corner brackets are located in the fender well behind the wheelwell plastic coverings. They hold the front fenders to the front fascia.

7. With the upper panel, lower panel and fender well connections released, remove the bolts that line the perimeter of the fascia and carefully remove the entire panel from the car. Check the Vortech instruction manual to make sure everything is removed; remember, we are not detailing the entire operation here.

8. A key modification, which allows the Vortech supercharger a little more room, is to reduce the angle of the radiator in comparison to the core support. Two brackets of this design are used; one on either side of the radiator.

10. The freshly massaged radiator hold down brackets look like this when finished. The posts that rise out of the radiator and are captured by the bracket are also cut down as shown here.

12. With the spacer installed in this manner, note two things here: the fact that the NPT hose fitting is positioned at 12 o’clock and the large O-ring in the face of the spacer is cleaned and ready for the throttle-body installation.

13. This is what the throttle-body looks like when turned 180-degrees from stock. This is required to achieve space for the supercharger and will not affect the unit’s operation.

14. After disconnecting the cooling fan harness from the core support and checking for interference with the fan shroud (Power Pack Equipped Mustangs will also have additional items in the way such as the front strut braces) the intercooler can be slid into place between the front bumper support and lower brace mounts from the bottom of the vehicles.

15. The brackets that hold the intercooler in place are bolted to existing holes within the core support – making this a much easier than it looks. For automatic transmission-equipped cars, these will need to use a spacer to move out the fluid line and one of the A/C lines will need to be bent slightly to clear the discharge tube.

16. The supercharger brackets mount to the engine in these three locations, which are accessed by removing the bolts that hold down the front engine cover. The cover in total is not removed, just these three bolts. Loctite Red thread lockers is used on the three studs that hold them in place to avoid being loosened by vibration.

17. Loosely assembled here for easy review, this is how the brackets that mounts the supercharger goes together. There are three bolts that hold it to the engine and some of the inner structure that holds the idlers in place.

18. A close up of the idler system that fits within the brackets is shown here. One of the bolts that holds the engine-side bracket in place features an Allen head that is countersunk into the bracket, allowing the idler to sit achieve this positioning.

19. Installing the supercharger housing requires some strength to lift it over the radiator and supports. It bolts to the bracket with five bolts. Vortech recommends that you lubricate threads and test fit the bolts into the back of the supercharger out of the car before you attempt the final bolt up operation.

20. A key change with the new Vortech Mustang kit is that the supercharger is self-oiling, meaning that it does not have an engine oil feed line to supply oil to the unit. This plug must be removed before you operate the system. Supercharger oil should be changed every 7,500 miles.

21. With the shipping plug removed, this vent plug must be inserted and torqued in place for the supercharger to operate correctly.

22. You can’t take the drive without a road map. This diagram shows just how to route the belt after installation. As you can see, it is important to get the belt, idlers and pulleys in the right place to be able to make it work properly.

23. Both of the tubes that direct air into and out of the Charge Cooler feature these air straightening directors and aid in keeping air from tumbling inside the tubing and avoid costly airflow reduction.

24. To keep fuel flow up with the increase demand warranted by the supercharger, the factory fuel injectors must be replaced with higher flowing units. New injectors are supplied with the Vortech kit that requires removal of the factory units. Included rail spacers are swapped in place of the factory ones to change the height of the fuel rail to accept these slightly shorter injectors. Vortech also recommends reducing the spark plug to 0.032-inch from the factory 0.040-inch sizing.

25. To increase fuel flow, a Vortech Maxflow fuel pump voltage booster is included with the system and is mounted behind the rear seat driver’s side interior panel. After removing the trim panel, seat belt guide and rear seat, the panel is removed. Two holes are drilled into the interior metal and the voltage booster is then mounted on the supplied bracket. A plug and play harness is also supplied with the Vortech kit that clips into the system to make for a very clean installation.

26. Of particular note is the Maxflow Billet blow-off valve that fits to the supercharger discharge ducting. This is a safeguard that keeps the system from building up excess pressure in the discharge ducting when under hard deceleration.

27. The final step to the tuning process is plugging in the supplied tuner to the OBD port to reflash the ECU for the new supercharger kit. The process takes only a few minutes to complete with prompts from the programmer throughout the process. Without a doubt, this is the easiest part of the install.