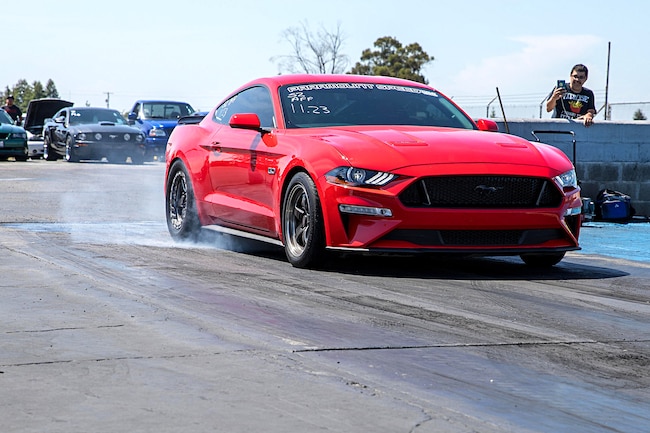 It's no secret that Ford hit a homerun with its revised 2018 Mustang 5.0, but the question remains, exactly how far is that ball going to fly? MM&FF ran a high 11-second pass with a completely stock 2018, but there's still a lot left with simple bolt-on performance. Paramount Speed in Chico, California are Mustang specialists, and they quickly got the ball rolling on their own project by ordering a no-option 2018, as they figured the simplest of models would also be the lightest.

First up was a trip to the scales and to the dragstrip, to see what they would be working with. The weight of the no-option car did indeed seem lighter than most at a curb weight of 3,680 pounds, which would hopefully lead to quick elapsed times. Next up was a bone-stock pass at Sacramento Raceway, which would give Paramount Speed owners, Steve Ellis, and Michael Ayers, an idea of just what their stock 5.0 could do. Traction was less than optimal at the street-legal Wednesday night drags, but the Mustang still managed a 12.18 at 119 mph, with a 1.96 60-foot time.

If you can remember the old days of Fox-bodied Mustangs, you may remember that extensive cylinder head and camshaft modifications were needed to make big power. Well, thanks to technology, that's no longer the case! Rated at 460 flywheel horsepower from the factory, the 2018 models are already stout, but there's room for more. A big jump in performance came from a Paramount Speed programming change, which allowed the use of E85 fuel (85 percent methanol or ethanol and 15 percent gas) in the Mustang. E85 is less energy dense than gasoline but can make better power thanks to a richer stoichiometric air/fuel ratio. Compared to pump gas, E85 is usually worth a good 10-15 percent jump in power, plus more aggressive tuning can be realized thanks to its 105 octane rating. Ellis also freed up the intake and exhaust tract of the engine with a set of long-tube headers, including a cat-back system from MBRP. The factory throttle-body was ported and intake casting was cleaned up (yielding a 12-percent increase in flow) and the engine was outfitted with a simple high-flow air intake. All of these modifications picked up nearly 80 horsepower at the wheels, going from 410rwhp to a strong 488rwhp.

Other than the tune, the second biggest factor in dropping the 2018’s elapsed time was a switch from the factory wheel and tire combination to a set of lightweight wheels with Mickey Thompson Drag Radials. Up front, the factory wheel and tire setup were replaced with a set of 17x5-inch Weld Wheels RT-S wheels, along with 26x6-inch Mickey Thompson Sportsman tires. Out back, much wider 17x10-inch Welds were outfitted with 305/45-17 E.T. Street R drag radials. The advantage of the wheel and tire change was three-fold, as there now would be more traction out back, less rolling resistance up front, and less weight all around. Ellis wasn't done however, as a last-minute addition of Baer brakes dropped another big chunk of rotating weight off of the Mustang.

The big news for the 2018s was the addition of a wild 10-speed automatic, that would only have a little over a 1,000-rpm drop during most gear changes, keeping the engine directly in its powerband. Just like the engine, the transmission received tuning too, but other than that, it's bone stock, including the stock torque converter. Ellis did at a QA-1 driveshaft however, to reduce rotating weight and enhance smoothness. There was also a gearing change, as the factory 3.15:1 pumpkin was replaced with deeper 3.55 gears that would help get the car out of the hole. The final step entailed installing a full BMR suspension kit which makes the car hook "with all the power we can launch with," notes Ellis.

With the Mustang already in the 10s, the team is unsure just how much of an e.t. drop they can accomplish, but the hope is that it's substantial. "We'll be stretching the limits quite a bit, especially the stock fuel system," says Ellis. But, we're working on talking to companies about camshafts, converters, and engine intakes geared for higher rpm. Are mid-10s in the cards? We may just find out.

1. The 5.0L engine in Michael Ayers' Mustang is remarkably stock, and it even retains the fancy plastic cover. As they say, the "trick is in the tune."

2. Lead mechanic for the project Steve Ellis noted that data logging is a very important part of the tuning process. "When you're looking for every tenth, changing the shift strategy by a few hundred rpm or changing the launch procedure can be worth quite a lot," notes Ellis.

3. Although the engine is stock, a set of longtube headers were installed on the car to free up the exhaust. While the factory exhaust is decent, again it's a case where every little bit helps.

4. Since Paramount Speed specializes in street cars, a full exhaust was retained for the Mustang. A set of straight-through MBRP mufflers add a full and healthy tone to the engine.

5. Probably the biggest single e.t. reduction came in the form of large sidewall 305/45-17 Mickey Thompson tires, which dropped the 2018’s 60-foot time from a 1.96 to a 1.67. That's three tenths from tires alone, and right at the starting line where it matters most.

6. Cutting down rolling resistance is important, but the big selling point on the Weld Wheels is weight. Just like the war to find more horsepower, the team went about shedding weight wherever they could.

7. Stopping was improved with a set of Baer brakes, but just like the wheels, the brakes also shaved a bunch of weight, taking off a whopping 68 pounds with just the front setup.

9. Recaro seats keep the driver and passenger safe and shave a bit of weight as well. Ellis also drove the car with a single Kirkey racing seat and no back seat, but the e.t. remained roughly the same. All the simple weight reduction tricks added up however, as the factory curb weight of 3,680 was long gone, with the Mustang now weighing in at 3,384 (without driver).