Part 2: Thank You for the Venom 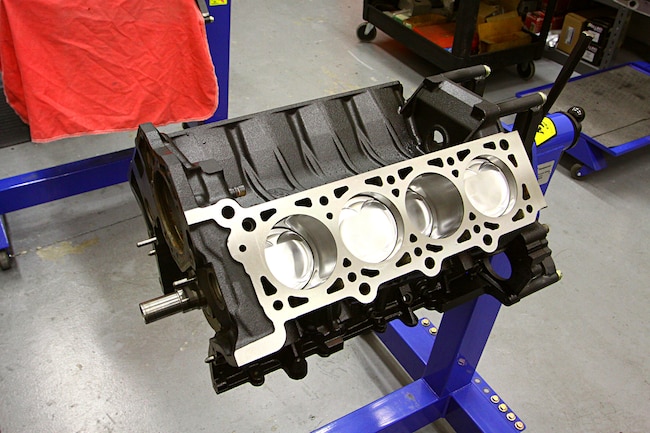 Getting back on the engine build for our Terminator swapped 1994 Cobra, we left you with the short-block build at MPR Racing Engines in Boynton Beach, Florida. Coming back to it, this installment covers completion of the long block, and getting the engine ready to go back in the car.

To refresh your memory, we bought a 1994 Cobra that had been treated to a Terminator swap. We knew there was some sort of coolant issue upon purchase, but we hoped the fix was a simple one. Unfortunately, the fix was a little more complicated, and we knew at the least the engine suffered from a blown head gasket, or two. We sent the car to Power by the Hour so the engine could be removed and sent to MPR Racing Engines for inspection and repair. Turns out, not only did the engine suffer from blown head gaskets, but the damage included a couple burnt pistons, as well.

We made a call to JE Pistons for a new set of slugs, which was covered in the previous article, along with a call to ARP for all the appropriate fasteners. MPR’s Tyler Eichhorn put together the short-block using the new JE Pistons, stock Manley connecting rods, stock Cobra forged steel crankshaft, and stock iron block. Of course, the block was treated to the appropriate machining to repair any damage it might have suffered.

For this part of the engine build, Tyler is tasked with installing the cylinder heads, camshafts, timing chains and guides, oil pump and pan, and our beautifully powder coated cam covers. More on those later, but until then, we’ll let the young gun Tyler do work.

1. When we last left you, MPR Racing Engines had assembled our short-block using a 2004 Cobra iron block, the stock forged steel Cobra crankshaft, the stock Manley connecting rods, JE pistons, Clevite bearings, and ARP hardware wherever applicable. Speaking of ARP, here MPR’s Tyler Eichhorn is installing our new ARP head studs, which will provide more accurate torque specs. Bolts have the tendency to twist while being tightened. Studs, however, remain stationary for a more accurate torque measurement. To us, there’s not much sexier than a short-block sporting head studs.

4. For our combination MPR’s Tim and Tyler Eichhorn recommended Cometic’s C5118-040 and C5119-040 head gaskets. The head gaskets are side-specific, and feature MLS technology to provide an ideal seal for aluminum heads onto either aluminum or iron blocks. The .040-inch head gaskets, combined with our JE -10cc dished pistons, brings our engine’s compression ratio in at a boost-friendly 8.78:1, which is a touch higher than the factory 8.5:1 compression ratio of the original 2003-2004 Cobra engines.

5. Starting to look like an engine again, Tyler slides the heads over the ARP studs and onto the Terminator’s iron block.

6. Tyler adds the ARP washers to the studs prior to tightening down the heads.

7. Tyler applies ARP assembly lube to the bottom side of the nuts so that he can get an accurate torque reading on the head studs.

8. Tyler starts out at 40 ft-lb of torque on the head studs and nuts, and then works his way up to 100 ft-lb of torque on the heads 20 ft-lb at a time. He also starts from the two center nuts, and works his way out. He’ll let it sit for a few minutes, and then he’ll go over the studs again at 100 ft-lb to make sure they’re torqued correctly. With that, our cylinder heads are installed.

9. Switching gears, Tyler replaces the engine’s factory oil pump with a new Ford Performance unit fitted with MPR’s own billet oil pump gears. Tyler uses a little assembly lube on the oil pump gears prior to bolting it together.

10. Tyler uses a little Permatex Threadlocker on the oil pump bolts before he torques the bolts to roughly 10 ft-lb.

11. Tyler soaks the rockers and followers in oil and coats the lash adjusters and lifters in oil before installing them on the heads.

12. Tyler applies oil to the lash adjusters, and then follows up by placing the rockers and followers on the cylinder head.

13. Tyler oils the cam journals prior to setting the cams in place. He then applies anti-seize to the cam cap bolts. These bolts are torqued to 8 ft-lb of torque. There’s a specific torque sequence on the cam journals, almost the same as when tightening a wheel.

15. Tyler torques the cam sprocket bolts to 65 ft-lb of torque. To help give a reminder of what bolts have been torqued, Tyler adds a little fluorescent green dot as a reminder to the ones he’s tightened.

16. While adding the driver side tensioner and timing chain, Tyler makes sure to line up the timing marks on the chain and sprockets on both the top and bottom. He then torques the timing chain guide bolts to 12 ft-lb of torque.

17. With both chains on, Tyler rotates the engine and sticks his thumb in each cylinder as he turns it over. Once he feels each cylinder’s compression stroke, he knows the engine’s perfectly timed.

18. The last thing before the timing cover, Tyler places the reluctor wheel on the crank.

19. Tyler installs a new front crank seal and front cover gaskets prior to installing it onto the engine.

20. Installing the front cover, Tyler torques the bolts to 16 ft-lb.

21. With the front cover installed, Tyler readies the cam covers for installation. He reinstalls the oil baffles on both cam covers, valve cover spark plug opening grommets, new gaskets, and new grommets for the cam cover bolt retainers. We had the cam covers powder coated Oxford White to match the Cobra’s exterior, and after thinking about it, we’re not sure if that was our best move. However, what’s done is done, so we’ll just have to keep them clean, even though that’s not our strong suit.

26. We used a GT500 oil pump, and that comes with a pickup tube, but Tyler used the original 2003 Cobra pickup tube because it has the proper routing and depth that we need.

29. There ya go. We’re kind of regretting the Oxford White cam covers, but we had them powder coated to match the car’s exterior. We’ll have to add a little more Oxford White under the hood to bring things together, all the while staying on top of cleaning them to make sure they stay nice.