Since we’re already rebuilding our small-block, we might as well add 100-plus horsepower too! 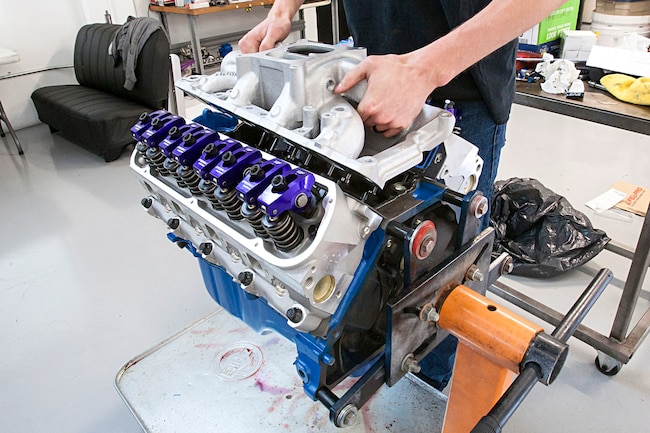 Whether you followed along for Part 1 of this wallet-friendly small-block rebuild or not, you won’t want to miss out on Part 2. This time around it’s all about adding a healthy dose of power to a run-of-the-mill 1971 302 small-block. We’re taking what could be an average rebuild and putting a small aftermarket spin on it by tossing out the stock top end in favor of some goodies we picked up from Speedway Motors.

With a set of reasonably priced aluminum heads from Flo-Tek as the catalyst, we spec’d out a handful of other top-end parts in hopes of bumping the little 302 up near 350 horsepower. That number might not sound impressive in the days of 1,000hp Internet heroes, but if you’ll remember, small-block Fords from the early 1970s weren’t pushing too far past the 200hp mark. So if you were being pulled around by a stock 302 like we were, you know you’re going to feel an increase of 100-plus horsepower.

So what was the plan of attack, you might ask? Well, the aforementioned Flo-Tek heads were what really got us thinking. Pre-assembled (valve seats, valves, valvesprings, and retainers), these things are going for around $400 each, so at $800 for a pair of performance aluminum heads, we were off to a great start. At that point it was about picking the right assortment of supporting mods, starting with the intake manifold. This was probably the easiest decision, and since street-driven performance was the goal, an Edelbrock Performer RPM Air-Gap was a no-brainer. Time and time again we’ve seen these make solid power at the top of the powerband without sacrificing low-end torque and drivability.

Next up was camshaft selection. We wanted something that would take advantage of the higher-flowing heads and intake manifold, but again, not give up too much down low. We also wanted to keep it cheap and simple, so we stuck with a hydraulic flat tappet. What we got from Speedway Motors was a cam with an intake and exhaust duration of 219/233 at 0.050 and .477/.510 lift with 110-degree lobe separation. Finishing off the valvetrain, we went with a set of Speedway Motors 1.6:1 roller rocker arms with a 3/8-inch stud to match the Flo-Tek heads.

To get fuel and air into the engine, we could have gone EFI, but since the word “budget” is in the title of this story, we decided to keep it simple and affordable. Thus, we opted for a Holley 650-cfm Double Pumper. Then to dress things up, we went for set of Speedway Motors black aluminum, fully finned valve covers and matching 12-inch oval air cleaner. And no, we didn’t forget about spark; our 302 was already fitted with an aftermarket HEI all-in-one distributor that was working well, so we just cleaned it up and got a set of MSD Street Fire plug wires and fresh plugs.

The end result was not only nice to look at (yes, we’re a bit biased), but it also met our expectations in terms of performance. Keep on reading to see how we got from a bare block and a pile of parts to a 350hp mill that’s ready to go.

1. First up we get ready to check the crankshaft journal clearance by installing our Clevite main bearings in the main journals and caps. Remember, install notch to notch and press firmly into place, ensuring each end of the bearing sits flush.

2. After torquing all the main bolts to spec, we checked crankshaft main journal to bearing clearance using a dial bore gauge and micrometer. If the clearances are too tight or too loose, it’s better to find out now than just cross your fingers and pray it all goes well when you fire the engine for the first time.

3. Next we installed the two-piece rear main seal with the groove facing inward and used non-hardening aviation sealant on the back and the top edges. Whether you install it flush or offset is up to you, but some claim that leaving one side higher than the other is better at retaining oil.

4. Unless you really trust yourself, its best to have a second set of hands when dropping in the crankshaft—don’t forget to thoroughly cover all bearing surfaces in engine assembly lube. Adding some lube on the inside of the rear main seal is also a good idea so it doesn’t catch on the crank.

5. Set all the main caps in place and then torque to spec, starting from the center and working your way out.

6. This could have been done earlier or later, but next we tapped in the core plugs using non-hardening aviation sealant on the edges.

7. Then, with a dial indicator and magnetic base, we checked crankshaft endplay using a screwdriver between the main caps and counterweights to force the crank fore and aft.

8. Before installing the rings on our Wiseco Pro Tru Street forged pistons, we went old school and used a file in a vise to gap each ring. Tech tip: a ring filer tool makes life much easier.

9. With the rings gapped and installed on the pistons, we prepared the rods by sliding in and lubing up the rod bearings. Then we used ARP Ultra-Torque Fastener Assembly Lubricant on the rod bolts.

10. Using a custom-sized 4.030-inch ARP tapered piston ring compressor is the hot ticket for installing the pistons without pinching a ring.

11. We then torqued all the rod bolts to spec before covering the camshaft in cam assembly lube and sliding it in. A longer bolt of the same thread and diameter as the cam bolt can be used to leverage the camshaft in place once the going gets tough.

12. The timing set was next. The big deal here is making sure those two little dots—one on the crank gear and one on the cam gear—are lined up with each other on the inside. If you want to be absolutely sure of the cam timing, use a degree wheel to dial it in, but the “lining up the dots” method is fine in most cases, especially with name-brand camshafts.

13. Then we installed one head to check pushrod length, using red marker on the valve stem. After installing two lifters, pushrods, and rocker arms, and turning the engine over by hand a few times, the rocker tips left the marks you see here. Any farther down and the pushrods would be too long; any farther up and the pushrods would have been too short.

14. Before installing that head and turning the engine over a few times, we stuck on some clay to check piston-to-valve clearance. Using a depth gauge, we found we had miles of room between the valves and the valve reliefs in the piston.

15. Before installing the rest of the lifters, we smothered them in the same cam installation lube. Failure to do so could do some serious damage to the lifters and the camshaft during engine break-in, especially with flat tappet cams.

16. We installed the Flo-Tek aluminum heads using ARP head bolts, then with the lifters, pushrods, and roller rockers all in place, we proceeded to set the valve lash. We ran down the poly lock by hand until it barely found resistance. Then, after a half-turn more, locked it down.

17. Flipping the engine back over, we installed the stock oil pump and pickup using high-temp threadlocker on the bolts and torquing to spec.

18. We then tapped in the crank seal. Like the core plugs, a large socket of the same diameter can be used to install the crankshaft seal too.

19. Next up, the oil pan and timing cover went on and were torqued to spec.

20. Then on went the Edelbrock RPM Air-Gap intake manifold. You might have also noticed that ARP sent us a set of its stainless steel accessory bolts to hold everything together.

21. When installing the Speedway Motors valve covers, we applied non-hardening sealant on the top side of the Fel-Pro gasket so later if we want to remove the covers from the head, the gasket would only stick to the valve covers.

22. The stock balancer went on next. Like the oil pan, timing cover, pulleys, and other stock parts, we cleaned up and painted the original balancer before installing.

23. We then installed the thermostat, thermostat housing, and water pump on the front of the 302.

24. The end was near as we installed the pulleys and accessory brackets, a task that was even more simple than usual since we weren’t running A/C or power steering.

26. As far as wallet-friendly, performance-oriented small-block Ford’s go, this thing actually turned out lookin’ pretty good, if we say so ourselves.

27. Better than just looking good, it also delivered on the performance end. After breaking it in on the dyno at Westech Performance Group in Mira Loma, California, our little 302 ended up making 348 peak horsepower at 6,000 rpm and 347 lb-ft of torque at 4,100 rpm—not technically 350 horsepower, but we’re claiming victory anyway.