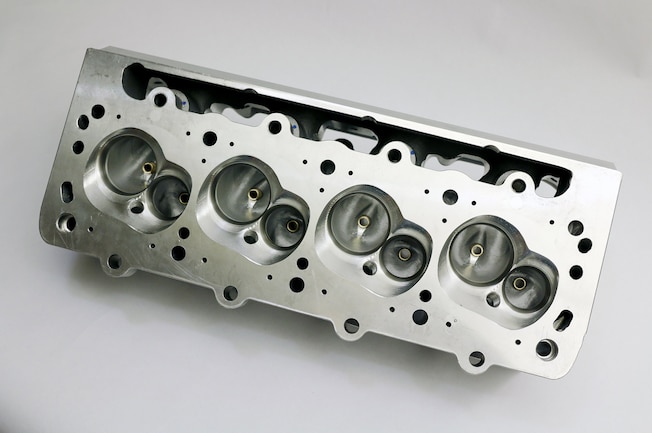 The Glidden Victor SC-1 cylinder head falls under Edelbrock’s Pro-Port raw heads lineup. Effectively a blank canvas for cylinder head specialists, Edelbrock only provides the basic shape of the combustion chambers and runners. From there, heads must be ported and have guides and valve seats installed. Like all our other heads, they are also cast in the USA at the state-of-the-art Edelbrock foundry with extra thick walls to allow for custom CNC porting. In most cases, seats and manganese-bronze valve guides are included, but not installed.

Flow on these cylinder heads may not be easily found as all of the cylinder head porters do not always share how much CFM they flow. “We do know they flow really well and make an incredible amount of horsepower when tuned properly,” explains Smith. “We have heard the intake runners will flow from 440-480+ CFM and the exhaust runners in the high 280s-300+ CFM at 28-inches.”

This is all accomplished with a maximum intake valve size of 2.24-inches with the exhaust valve of 1.64-inches. “The intake valve angle is another reason why this cylinder head is so good, it is 7.3-degrees by 0.3-degrees, and the exhaust valve angle is at 6.88-degrees X 0.55-degrees,” said Smith. Keep in mind that getting the valve angle closer to zero allows the air to travel from the intake manifold to the valve with the least amount of turns; less turning increases speed. “Do not forget this is a small-block Ford cylinder head, where the factory inline valve angle is 20-degrees.”

With a raised port location to reduce the valve angle requires an intake manifold specifically designed for the job. For our job we picked up a PN 2868 that’s designed for 9.5-inch deck height Windsor motors sporting a 4500 series carburetor. “ These manifolds also came from our NASCAR racing program,” explained Smith. “These were originally used for Cup, Nationwide, and the Truck series divisions.”

Also designed for a drag racer in mind, it’s a longer plenum front to rear, which makes the runners more equal length to each other. Our 2868 manifold will actually bolt onto a Glidden Victor II and the Glidden Victor SC-1. So if you’re looking to make maximum horsepower for either boosted or naturally aspirated combinations, the Glidden Victor line of Edelbrock cylinder heads should be in your consideration!

Many Edelbrock Pro-Port Raw cylinder heads are available with a technique called Hot Isostatic Pressing (HIP). This aerospace process heats raw aluminum castings up to 900-degrees Fahrenheit in a pressurized chamber (up to 30,000 psi) and compresses the casting to remove any trapped gases and internal porosity. The result is an incredibly strong and dense sand casting that has three times the fatigue life and nearly the consistency of billet aluminum.

By the Numbers with Total Engine Airflow

Total Engine Airflow (TEA) was our porter of choice for our heads. We came out with a 390cc intake; 173cc exhaust runner; and a 50cc chamber.

1. The Edelbrock SC-1 cylinder head is one of the baddest small-block Ford heads on the planet. The cylinder head falls under Edelbrock’s Pro-Port raw heads lineup. Effectively a blank canvas for cylinder head specialists, Edelbrock only provides the basic shape of the combustion chambers and runners.

3. All this flow is accomplished with a maximum intake valve size of 2.24-inches with the exhaust valve of 1.64-inches.

4. Cylinder head specialist must install the included guides and seats once the CNC work has been completed.

5. With a raised port location to reduce the valve angle requires an intake manifold specifically designed for the job. For our job we picked up a PN 2868 that’s designed for 9.5-inch deck height Windsor motors sporting a 4500 series carburetor.

7. The runner dividers are pulled back and the end runners are shortened to increase plenum size for more peak horsepower with a larger carburetor.

8. Remember when we talked about how well these heads flowed? Check out the numbers from our heads. A monstrous 470 CFM on the intake and 333 CFM on the exhaust at one-inch of lift!