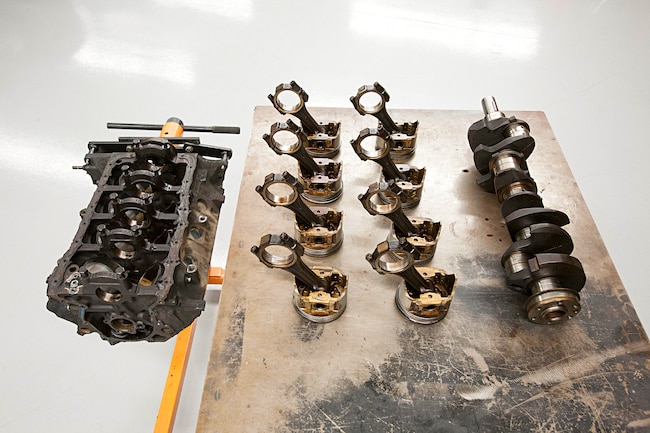 There are countless reasons for rebuilding an engine, and countless more directions to take the build once you’ve started, but for us the reasoning was simple. In short, our little small-block 302 was well-used and needed a refresh. While we were at it, we decided we might as well spend a few extra bucks (but not a bunch!) and squeeze a little more performance out of it.

It all started with a routine oil change on our largely stock 1971 engine (the only real modifications to the 302 included an Edelbrock Performer 289 intake manifold, an HEI distributor, and an old four-barrel Carter AFB carburetor). Everything was fine and dandy until we noticed the oil had an unusual shimmer to it—dang. Luckily the engine had been running fine and we hadn’t noticed anything out of the ordinary before this, so the metallic sand-like flakes we were seeing most likely just meant one or more of the bearings were wearing out. Out came the engine and after a quick teardown we found even bigger metal chunks in the oil pan and oil pump pickup. It didn’t take long before we found the culprit: the No. 1 cam bearing was half gone. Everything else looked intact with no other visual damage, so we decided to go ahead with the rebuild.

The plan was to reuse as much of the block, rotating assembly, and various other parts as we could so we could spend money where it would count. We were thinking a set of low-buck aluminum heads, a cam, lifters, rocker arms, an aluminum intake manifold, and a carburetor would do the trick, but we’ll get more into parts selection in Part 2 of this tech story. For now, it’s off to the machine shop where we will show you how to check clearances to determine what can be salvaged and what needs to be tossed. Then we’ll walk you through each step of refreshing a long-block from boring and honing all the way to balancing the rotating assembly and everything in between.

The machine shop we’re working with on this build is Hollins Auto Machine Co. in Orange, California. John Hollins, owner and longtime machinist, has been in the business for over 50 years. In fact, he has operated Hollins Auto Machine Co. out of the same building for 52 years now, so he knows a thing or two when it comes to breathing life into an old engine. We followed John through the whole machining process to hopefully give you a comprehensive look at everything that goes into an engine rebuild. You’ll soon get an idea of what you can do at home and what you’d rather let a pro handle. For example, get a good set of micrometers and you can do most of the detective work yourself, while stuff like cutting the deck and reconditioning the rods are better left to a real machinist.

If you’re embarking on your first engine rebuild, or just want some good tips and tricks for your next one, follow along as we take a worn-out, old 302 long-block and get it ready for its new life as a wallet-friendly driver that performs.

1. Our story began with a disassembled bare block, along with the stock crankshaft, rods, and pistons, which we dropped off at the machine shop. To get things started, John hot-tanked the block to get it clean for machining and then magnafluxed it to check for cracks.

2. With everything looking good he moved on to checking cylinder wear using a dial bore gauge. First, he measured at the very top of the bore and found it to be the stock 4.000 inches. Then, he measured just underneath the ridge on all cylinders and found 0.010 inch to 0.020 inch of wear, which meant we had room for a 0.030-inch overbore.

3. Next, John used an outside diameter (od) micrometer to check rod journal and main journal wear on the stock crankshaft. Based on the stock diameters, he found that the rod journals would need a 0.020-inch grind and the mains would need a 0.010-inch grind (we will keep this in mind when it comes time to buy new bearings). The crank was then sent out to be turned to those specifications.

4. While going over the block before doing any machining, here’s something else to look out for. From the factory, they included a little pin that keeps the old-style rope rear main seal from spinning. Since we would be using a modern two-piece rubber main seal, we needed to punch out that little pin.

5. Before beginning the machining, we needed to verify the exact diameter of our new 4.030-inch Wiseco Pro Tru Street forged pistons (which came in a set with rings and piston pins) using another od micrometer. We found them to have 0.003 inch of built-in clearance because they measured 4.027 inches. This meant after boring and honing we were looking for 4.031 inches, since Wiseco suggests a total piston-to-wall clearance of 0.004 inch.

6. Next up was the bore. After adjusting the bit, John stopped the machine just after contact with the cylinder to verify the cut with an inside diameter (id) micrometer before letting the machine complete the bore. He looked for an overbore of just 0.025 inch. The rest of the clearance would be taken out in the honing process.

7. He repeated the check at the start of every cylinder bore and then checked again after. Other than that, the process was a matter of sitting back and letting the machine do its job.

8. Next, he used a dial micrometer to check the squareness of the deck. He measured the front, middle, and rear of the deck and found that ours was 0.003 inch lower in the rear on the left deck.

9. To get the deck squared, he set the machine to cut off 0.003 inch at a higher speed first, followed by 0.002 inch at a much lower speed for the finish cut. John then repeated the same process on the right deck and found it more uneven, so he had to come back to the left side and take another 0.008 inch off to make both sides even.

10. The honing process was also done in two steps, with the first coarser stone bringing the bores to 4.028 inches before a finer stone honed the bores to 4.031 inches. While you could perform a basic dingle ball hone at home, you won’t achieve the same quality in crosshatch pattern, which really helps move oil up and down the cylinder walls and keep things well lubricated.

11. Since we aren’t going to make huge power, we decided to save a few bucks and recondition the stock rods. To begin, John lightly machined the parting line face, which decreases the overall diameter to leave room for honing.

12. He then installed the caps using our new ARP rod bolts, torquing them to spec before using a special rod-measuring gauge to determine roundness and see how much honing it needed.

13. John performed a quick hone and then measured again, repeating those steps until it was perfectly symmetrical. Then the process was done with all eight rods, and before long they were ready to be pressed onto their new pistons.

14. Then, it was time to balance the whole rotating assembly. He started by weighing the pistons to find the lightest one. Once it was identified, he weighed and removed material off the inside of the other pistons until they were all within 1 gram of each other and recorded the final weight.

16. Finally, he weighed and recorded the weight of one full set of rings and then one piston pin. The weight of each individual component went into the computer and told John how much the bob weights needed to weigh for accurate balancing.

17. He then set up the bobs with their respective weights and installed them on the crankshaft, using a level to ensure they were positioned correctly.

18. John then installed our original damper and flexplate that we were reusing before firing up the balancing machine.

19. The machine told John how much weight needed to be removed and where, then he used a drill press to remove material from both counterweights as needed. He took out a little bit at a time, going back and forth between sides until the computer showed it was properly balanced.

20. Next, John fired up his propane grill (really, that’s essentially what it is) and heated up the small ends of the rod in preparation to install them on the pistons. Once they turned blue, they were ready to go.

21. The heat expanded the rods just enough to slide them onto the piston pin. He only had a few seconds before they would cool and shrink, so he had a jig setup that held everything perfectly centered, then he slid the pin through the piston and rod.

22. The last thing we had John do before taking things into our own hands was the cam bearings install, because we didn’t have an installer tool on hand. Starting from the back of the engine forward (No. 5 to No. 1), he tapped in the new cam bearings with the oil hole facing the bottom side of the block.

23. Using a flashlight to illuminate, John looked down the oil gallery hole at the bottom of the corresponding crank journal to make sure the cam bearing oil hole was lined up well enough. If you miss this step, your cam bearings will wipe themselves out in no time upon initial startup.

24. Finally, another precaution John took was to use an old camshaft with the journals oiled up to make sure the new bearings weren’t too tight. We found our No. 1 to be a little tight so John used a scalpel tool to remove some material.