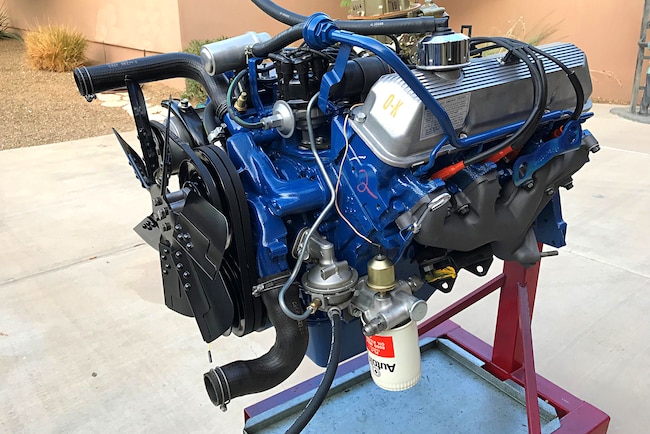 The last two issues, we brought you Part 1 and Part 2 of Marcus Anghel’s exhaustive deep dive into how to detail a 428 Cobra Jet engine to concours level. This month, we wrap up the most comprehensive story on how to correctly detail the 428 Cobra Jet. For a refresher on the previous articles, check them out here- Part 1; Part 2.

This story was originally done in the March 1994 issue of Mustang Monthly by Bob Perkins, and it was one of the most thorough detailing articles written on the subject. That article, like so many others of that time, was mostly with black-and-white photos; so here we update that with full color photos, plus we add some more in-depth detailing items. Although not every single option and feature can be shown in this story, this guide should serve as a good basis for some of the common detailing tips and tricks. 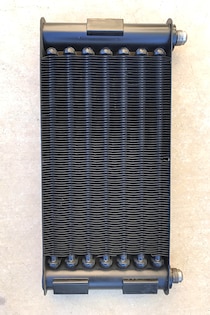 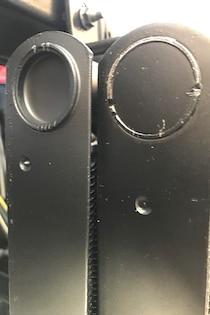 1. On cars that were ordered in 1969 and 1970 with the optional 3:91 or 4:30 rear axle ratio, Ford added a special package that was known as the Super Cobra Jet. This included different internals for the engine, but the noticeable pieces that are visible from the outside are listed here. The most noticeable feature was the front-mounted oil cooler. This was placed in front of the radiator, as shown. The oil cooler itself has seven tubes across and is two rows wide with eight fins per inch. They also came with two different styles of freeze plug caps on the ends, as shown here. Both styles are correct. The flow of oil and inlet of the oil cooler is actually on the bottom with the outlet of the cooler on the top. 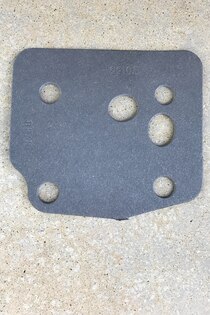 2. There were two different oil filter adapters that were used on the Cobra Jet engines. The normal adapter was marked with the engineering number C8AE-6881-A. The special adapter used on the SCJ engines was marked with a C9OE-6884-B. Both would be a bare aluminum, as shown. The correct style gasket is shown and would not be painted with the engine. 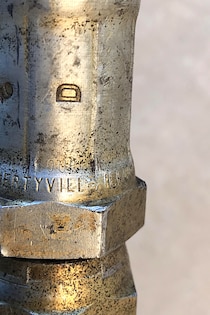 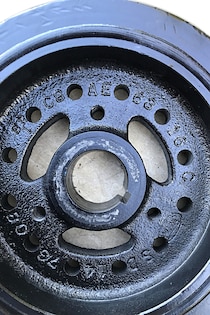 6. The oil cooler was held in place with two special brackets that the Mustangs and Cougars used. The upper bracket was marked with a C9ZE-6B633-A and the lower was marked with a C9ZE-6B634-A engineering number. In the photo on the left here you can see the bare, unpainted area around the oil cooler outlet, as the originals had a cap there when painted.

7. Note the thermostat bypass hose and clamps are painted with the engine, while the water pump inlet is not. 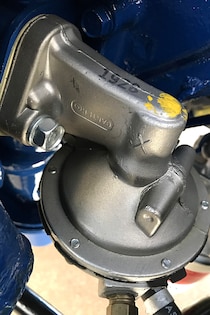 8. Fuel pumps are a Carter “X” style pump identified by the X cast into the front face, as seen here. The casting number (4441S) and the date code would be stamped underneath at the mounting flange. 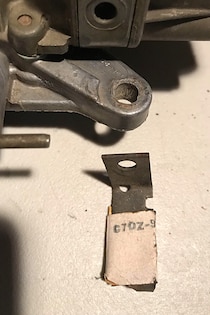 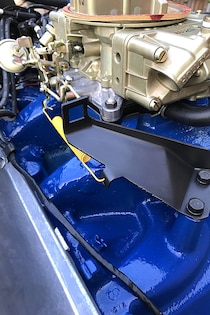 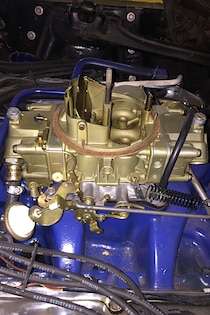 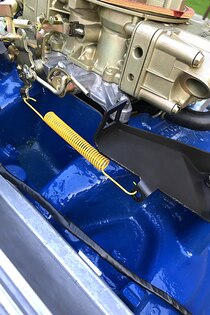 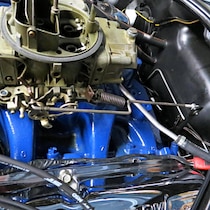 10. Original throttle cables in ’69 and ’70 had a metal spiral wrap, and the service replacements had plastic covering. The ’69 cables are different from ’70 in how they attach to the firewall. Note that the ’68 engines used rods and not a cable.

11. With so many different configurations of Cobra Jet engines, there were several different fans that Ford designed. Each one has a specific use, as indicated in the chart. This would serve as a general guideline, with buildsheet information (if available) being the best way to confirm because of change over dates. The engineering numbers are stamped on the fan blades themselves, and they would be date coded as well (except for the C9ZE-E fans). The fans were dipped in black paint originally and would have runs in them as opposed to being sprayed. A fixed pitch fan was the most common used during these years with the exception being the flex fan used in 1970.

12. All of the fans listed above used a fan clutch except for the last two fans listed (C9OE-H and the D0TA-C), which used a fan spacer. Note the differences here between the original-style spacers shown and the service replacements that were sold over the counter.

13. The C9OE-H fan spacer is shown here. Original assembly line–style on the top is the thick version marked with Dorman logo and measures 1.36 inches in length. The service replacement is shown underneath, which is marked C8YE-A and is 1.25 inches in length.

14. The D0TA-C fan spacer is shown here. The original assembly line–style is also a thick style marked with the Ford logo in the center, and with a C stamped at the base. The service replacement is marked with a C8AE-C and both the original and replacement measure 1.88 inches in length. 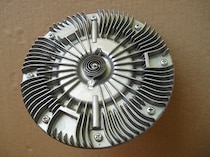 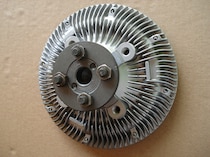 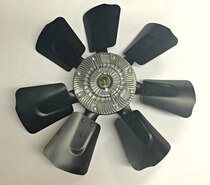 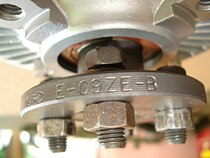 15. With certain configurations Ford used a fan clutch. These would control the speed of the fan based on temperature and engine rpm. These fan clutches are filled with an oil that is regulated by a spring/switch that regulates the flow of oil, and then the amount of speed. The fan clutches have the engineering numbers stamped on the base, as shown, and can be seen when installed.

16. Original fuel pump gaskets were a white material, and when installed on the engine you can see the edge of the fuel pump gasket—another detailing item that makes a difference on concours restorations. 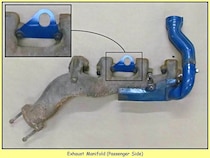 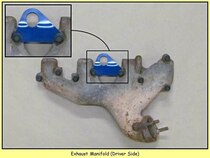 18. Engine lift hooks were originally attached to the exhaust manifolds to help with engine installation. The passenger-side lift hook was always the same and has no stampings. The driver side has three different versions. Version 1 was only used on ’68 Shelbys to help with valve cover interference. Version 2 was used in 1968, and Version 3 was used on all other Cobra Jets. These parts were never serviced by Ford.

19. Original PCV hoses in 1968 and 1969 were often painted blue with the engine and will have some overspray on them or be totally covered in paint, including the PCV valve itself. The PCV hose design changed in 1970, so this is not normally seen on a ’70 engine. Note the original rubber grommet used for the PCV valve with the C7AE-6A8920-A engineering number.

20. The original oil filter used by Ford was a FL-1 filter. 1968 production and most of 1969 cars would be a dual-crimp–style filter and then it changed to a single-crimp style in late 1969 production. Originals have date codes as shown, which in this case is Feb. 4, 1970. Assembly line oil filers would be painted blue, but were not actually painted on the engine.

22. When the engine was painted it was typical that there would be blue overspray on the four-speed bellhousing and bolts since it was one assembly. The photo here shows an original bellhousing.

A special thanks to those fellow enthusiasts who have helped here with their knowledge and photos and ideas…including of course Bob Perkins for his years of experience, patience, and guidance; Jim Woods for his great collection of photos; Jack Brooks for all things concerning alternators; Scott Fuller for his collection and photos of 1968 cars; Dave Lochhead for his collection of N.O.S. parts; Kerry Wortman for his years of research on engine block decoding; Bob Gaines for photo contributions; Chris Teeling and Scott Hollenbeck for their work with the 428 Cobra Jet website, and many others on 428cobrajet.com.