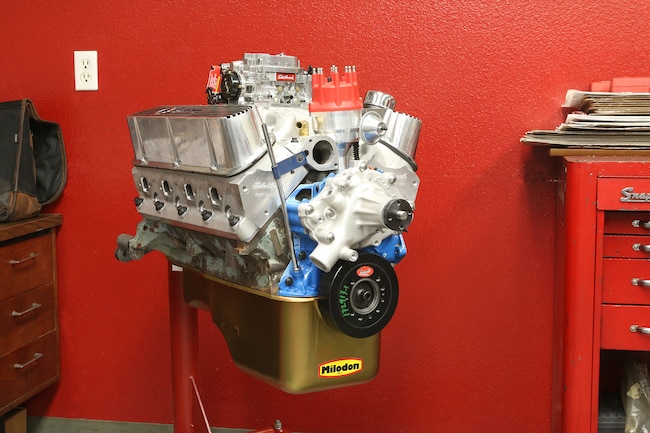 Several years ago, we installed an Edelbrock Performer RPM Power Package Top End Kit to a 289 in a ’65 Mustang, and while it certainly gave the engine a newfound level of power, it wasn’t quite what we were expecting horsepower-wise. Sure enough, a leakdown test proved that the 289’s short-block was indeed just flat worn out, with varying percentages of cylinder leakage past the rings. If we wanted the engine to actually run to its potential and take advantage of those nice, shiny, new Edelbrock speed parts, it needed to be rebuilt.

The question then became whether to keep it at the stock 289 cubic inches (with most likely a 0.030-inch overbore to compensate for the cylinder/piston wear), or go a little bigger with a stroker kit. Upon teardown, it became clear that a 0.030- or 0.040-inch overbore would clean up the cylinder walls, but that would mean new pistons, and the crankshaft wear meant that the crank may need some machine work. And because we were reinstalling the Edelbrock top end kit and wanted to possibly add more power at a later date, we wanted to replace the connecting rods. When you compare the cost of machine work and the need for new rods and pistons anyway, there’s really no reason to not go with a stroker kit. Yes, a full stroker kit can be more expensive than re-machining and replacing stock parts, but other than that there are no real downsides to putting a stroker kit in, with the possible exception of a ring seal with short deck-height pistons. This is more commonly an issue with 347ci combos, but we’ve seen 347s with tons of smoke-free miles on them.

Since we were using Edelbrock parts and the company offered to help us get the most out of them by rebuilding the engine for us, we let them do it. (Okay, in all honesty we begged them to fit us into their schedule!) Edelbrock often uses stroker kits from Scat, so we ordered Scat’s 331ci kit that uses a 4340 forged-steel crank with 3.250 inches of stroke (a stock 289 crankshaft has a short 2.87-inch stroke). With a cleanup of the stock 289 block to a finished bore diameter of 4.040 inches, that 3.250-stroke crank provides 334 cubes. Scat also provided the I-beam forged rods (part number 2-ICR5400-927) and Autotec forged pistons with -10.7cc dishes for a streetable compression ratio.

The top end, of course, is Edelbrock’s Performer RPM Top End Kit. Available as a single part number, the top end kit’s appeal, especially for an engine building novice, is that they’ve eliminated any guesswork on power levels, including most everything you need to top off a rebuilt short-block including the cylinder heads, camshaft and lifters (lifters not included with a hydraulic roller cam), and intake manifold. The standard RPM kit (part number 2091) comes with a flat tappet cam, but we have experienced camshaft failures recently when using some flat tappet cams, and a roller cam makes more power everywhere anyway, so we went with the more aggressive hydraulic roller in this combination, part number 2043.

This little 334ci thumper was carefully assembled by Edelbrock’s main engine builder, Robert Jung, and dyno-tested by Curt Hooker; they have a combined 70-ish years with the company and do these jobs day in and day out. We were guessing the engine would make in the high-300s or low-400s on horsepower based on Edelbrock’s extensive dyno-proven combos, and that’s right where it came in, with a peak horsepower of 410.5 at 6,000 rpm and 390.6 lb-ft of torque at 4,500. In a relatively lightweight 1965 Mustang, that’ll move you down the road just fine and allow burnouts at will.

1. This story is not a “how to build an engine” deal so we won’t go into detail about checking clearances when assembling an engine, but suffice it to say that Robert had everything dialed in before we arrived at Edelbrock and had the Scat rotating assembly laid out on the work bench ready to install in the stock block.
2. King main bearings were used between the block and crankshaft and set at 0.0016- to 0.0022-inch clearance, then they got small beads of assembly lube, as shown. This is to prevent excessive wear on engine startup, before the oiling system is fully primed and flowing. ALWAYS use assembly lube when building an engine—don’t rely on just a coat of motor oil.
3. The Scat 3.25-stroke crank is placed carefully so as not to nick a bearing or journal, both of which would be bad. The main caps were torqued to 65 ft-lb.
4. The Scat rods and Autotec forged pistons are dropped into the cylinders once the crankshaft is installed and torqued. Rod bearing clearances ranged between 0.0025- to 0.0027-inch, with dead-consistent 2.1230 crankpin diameters. The rod-to-rod side clearances were set at 0.014-inch.
5. The final compression ratio is dependent on piston deck height (how far it sticks in or out of the bore), and deck height also should be checked to ensure adequate piston-to-valve clearance. With Edelbrock’s Top End Kit this is a no-brainer, but you still want to do it just to be “in the know.” This engine has the pistons 0.005-inch down in the hole.
6. Edelbrock’s #2221 hydraulic roller cam is part of the #2043 Top End Kit and features 0.520-inch lift on both intake and exhaust, with 227/234 degrees of duration at 0.050-inch lift, with a 112-degree lobe separation. Those numbers mean the engine will have a definite rumble at idle but will still be completely drivable. Each lobe was liberally coated in assembly lube, which comes with the camshaft.
7. You can just install the cam by lining the dots up on the timing gears, but it’s always best to dial it in if possible. Robert installed this cam on a 107-degree intake centerline.
8. With a -0.005-inch deck height, 0.045-inch-thick Edelbrock/FelPro head gaskets, and the 60cc chambers of the Edelbrock Performer RPM heads, the compression ratio comes in at a pump gas–friendly 9.5:1 ratio.
9. The beautiful “laying on of the heads” is a wonderful step in any engine build. The Performer RPM heads are designed to work best in the 1,500 to 6,500 rpm range, which is where 99.9 percent of street cars operate.
10. Performer RPM heads come with pushrod guideplates and screw-in 3/8-inch studs. Intake valves are available in 1.90- or 2.02-inch diameters (we used the bigger 2.02s) and exhaust are 1.60-inch, with manganese bronze valve guides and 1.460-inch-wide springs.
11. We used Edelbrock’s red roller rockers, which are manufactured in the USA from lightweight 7129 grade aluminum. The bodies are CNC-machined then micro-polished and anodized for durability. The full body design will accommodate up to 1.65-inch-diameter springs. Thick-walled adjusting nuts and 4140 steel poly locks are included.
12. Robert likes to smear a very thin coat of RTV around the intake gasket ports (manifold side) before laying the intake manifold in place to ensure a vacuum-proof seal.
13. Intake manifold end rails have an annoying tendency to push out when you install the intake, especially when using stock cork-type seals that come with most kits. Robert uses Permatex “The Right Stuff One Minute Gasket” on the end rails, laying down a perfect bead front and rear before dropping the intake in place. The intake itself is a part number 7521 Performer RPM.
14. The oiling system is all Milodon, including pump, pickup, pump drive, and oil pan. The pan is part number 30720 with a front sump, 5-quart capacity, and complete internal baffling for oil control.
15. All the B.S. stops once the dyno is the judge. We topped the combination off with an Edelbrock 1813 800-cfm carburetor and MSD electronic distributor (with part number 85832 iron gear), then after a 30-minute break-in period (mostly to check for leaks), Curt pulled the handle (actually, he pushed buttons on the modern Superflow dyno) and was rewarded with two pulls that were within one horsepower of each other, topping out at 410.5 at 6,000 rpm, and the power curve was still climbing. We stopped the test there, since realistically the car owner will never go higher than that (so what’s the point, right?). Also seen here is the Scat 28-ounce external-balance harmonic balancer (part number SCA 8006).