Brenspeed builds a high-mileage Coyote for the dragstrip 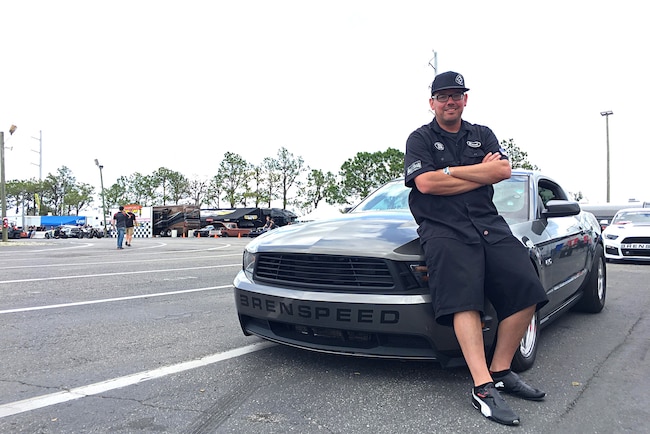 So, we can all agree that the Coyote engine changed the Mustang game, correct? It rendered every other factory engine fighting for second. Save for extreme racing classes where the pushrod engine still reigns, the Coyote engine is the platform for many a dominating combination. Using many factory Ford components, many racers are deep into the 7s. With power adders, many stock Coyote engines have been in the 8s with just the addition of billet oil pump gears (preventative maintenance). In the Fox days, running 8s meant you had a full-blown race car, but the Coyote engine, 6R80 transmission, and S197 chassis makes it much easier than in the past.

Thing is, many of us have had to wait for prices to come down and be within our budget to add a 2011-2014 Mustang GT to our stable. With Fox Mustang prices only going up, and the new 2018 Mustang GT setting the world on fire, right now is the time to buy a 2011-2014 Mustang GT. Thankfully, Brenspeed’s Brent White has done the hard work to show us all the way to bring a high-mile Coyote back to life.

Doing all the hard work involved Brent finding and buying the car, assessing the car’s condition to make sure it was ready for life at the dragstrip, and making the necessary tried-and-true modifications to make the car competitive. Brent started with maintenance items like timing chains and components, but then made the push to upgrade the car’s intake side of things.

Starting at 359 horsepower, with just a round of intake mods, power climbed to 399 horsepower. At 6,800 rpm the car picked up 60 horsepower. Up next is a full exhaust system and suspension modifications. Until then, check out what Brent White and Brenspeed crew worked up on this high-mile 2011 Mustang GT.

1. With 160,000 miles on the car, the engine in Brenspeed’s 2011 Mustang GT looked rather weathered and tired. First things first, Brent needed to make sure the engine was healthy, but before cracking open the engine, he put it on the dyno. When it made 359 horsepower at the wheels through the factory 6R80 automatic, Brent knew he had something with which to work. “That’s right on par with a 2011-2014 Mustang GT with 20,000 miles on it,” Brent says. With the combination making good power, Brent can begin the teardown process to see how the engine looks.

2. There are a couple different ways to check the health of an engine. First thing is to see if it smokes on start-up, and also after idling a few seconds. Excessive smoke from the tailpipes could indicate potential problems. Either way, where there’s smoke, there’s a weak link in the engine. A more thorough examination is via a compression test. This is a key test to ensure the health of an engine. A compression test examines the health of pistons and rings, valve seals and head gaskets. The gauge will display each cylinder’s pressure, and its ability to hold pressure. Solid numbers at each cylinder, and within five percent of each other, means you have a strong base from which to start. In the case of Brent’s High-Mile Coyote, compression checked in great, and upgrades were about to commence.

3. Once the engine was found healthy, the Brenspeed gang ripped into the engine, tearing apart the front half and removing the stock intake. The valley under the intake is usually good for gathering various dead insects, dirt, leaves, and the like. Along with all the performance upgrades planned for the car, Brenspeed makes sure to replace all the old gaskets with new Ford items.

4. The list of parts for the first round of mods is quite lengthy, but many of the mods were aimed at replacing potentially tired components. Ford Performance was sourced for a front drive kit, which encompasses the timing chains, guides, high-RPM Boss 302 tensioners, and sprockets, but the stock intake is also getting replaced with a Ford Performance Cobra Jet Intake Power Up Kit. Also being brought on board is a GT500 cooling fan, an Afco radiator, a Reische 170-degree thermostat, a Meziere electric water pump, and Triangle Speed Shop oil pump gears. With 160,000 miles on any engine, you want to really take a close look at all of these items, and replace as necessary. The timing chain components go without saying they should be replaced, even if the engine was found in good working order, and well-maintained.

5. For the intake, Brenspeed used what Ford Performance called at the time a Cobra Jet Intake Power Up Kit. Ford Performance no longer has the Power Up Kit as one part number, but you can still get these components as single units. The Power Up Kit consisted of the Cobra Jet intake manifold, a Cobra Jet 65mm twin bore throttle-body, and a Cobra Jet cold air setup. A custom tune is required for these components, so if you plan to add one of these to your Coyote engine, make sure to have a tuner on standby. The Cobra Jet intake fits 2011-2014 Mustang GTs and 2012-2013 Boss 302s. Obviously, this intake is pretty popular with the Coyote-swap crowd, as well. And FYI, the intake has a new part number, which is M-9424-M50CJA. The only difference is the Ford Performance rebranding.

9. With the oil pump gears replaced and the housing reinstalled, the Brenspeed folks install the Ford Performance Front Drive Kit’s timing chains, sprockets, guides, and high-RPM tensioners. With 160,000 miles on the car, and many mods to come, Brenspeed’s Brent White didn’t want to take a chance on the original factory units.

10. Brenspeed went one step further by adding a Meziere electric water pump. The Meziere water pump is good on the street and at the track, providing 55gpm and weighing only 7.3 pounds. Mezier’s Coyote water pump uses factory hardware and is supplied with the appropriate O-ring seal. Meziere’s electric water pump is designed to free up horsepower by reducing parasitic drag. Under normal use, Meziere says the pump draws just 11-12 amps.

11. In addition to the Meziere water pump, to make sure the cooling system had a fresh start, Brenspeed replaced the car’s factory radiator with an Afco aluminum unit, along with a Reische 170-degree thermostat. Both components are designed to help keep the Coyote engine cool during drag race conditions.

13. It’s starting to look like an engine again. The Cobra Jet intake bolts right in place of the stock intake. Some of the coolant lines and fittings have been added, as well.

14. The Cobra Jet intake was designed for use with a manual transmission, and as such doesn’t have a provision for the aspirator tube. Therefore, one has to be made up. Brenspeed remedied the situation with a length of hose and a new fitting.

15. Setting up the new Cobra Jet cold air, the mass air sensor has been installed in place, along with the PCV fitting.

16. With the cold air intake installed, the High-Mile Coyote’s first round of modifications are done. Brenspeed started at 359 horsepower at the wheels, and after this round, Brent used an SCT LiveWire to tune the final numbers in at 399 horsepower.

17. Brenspeed’s dyno is going to be busy during the High-Mile Coyote build, and for the next installment it will be called in to document horsepower improvements that come from opening up the car’s exhaust.