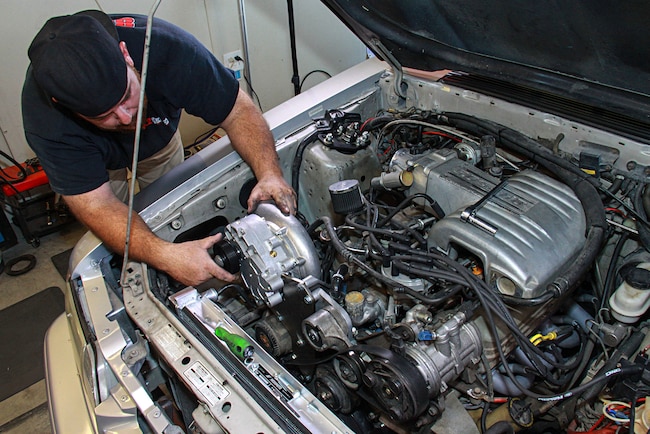 Some things go hand-in-hand: peanut butter and jelly, chips and salsa, and centrifugal superchargers and Mustangs. Back in the heyday of the Fox-body Mustang boom, the whine of a gear-driven supercharger under the hood of 1986-1993 Mustang was part of the era’s soundtrack.

Blown five-point-ohs are popular because a centrifugal supercharger fits the pushrod EFI 5.0L’s intake arrangement like a glove. So well, in fact, that it looks like it belongs there. Arguably, Vortech Superchargers’ offerings for late-model Mustangs put the California company on the map.

Vortech Superchargers still offers a selection of kits for old-school Mustangs. In fact they’ve continually refined their offerings; the original Vortech blowers were lubricated by tapping into the engine’s oiling system and returning the oil to the pan, but the prospect of tapping the pan for the oil return line spooked many customers. Vortech recognized this factor, and developed new series of gear-driven superchargers that feature self-contained lubrication systems.

When presented with a near-stock 1993 Mustang LX, we smelled the opportunity to sample an updated version of an old favorite. Vortech sent us their Ford 5.0 Mustang Entry Level System (PN 4FA218-010L), which features Vortech’s latest V-3 SCi supercharger with self-contained lubrication system and updated impeller. The V-3SCi has a 75% adiabatic efficacy, which means it takes less power to turn and generates less heat per pound of boost than other designs. The kit is set up for 5-6 psi, and includes all the necessary brackets, hoses, belt, and fuel management hardware to increase fuel delivery under boost.

Our stock 5.0L engine with a few bolt-ons produced 193 wheel horsepower and 256 lb-ft of torque. The self-contained oiling system of the V-3 SCi supercharger made the installation a breeze. With the Vortech supercharger stuffing more air down the 5.0L’s stock intake, the Fox-body put down 274 horsepower and 296 lb-ft of torque to the rear wheels. That’s a 16% increase in torque and a 45% increase in horsepower—pretty incredible for a few hours’ worth of wrenching. Follow along as Kelly Henry from KWH Fab installs the complete Vortech SCi system and teaches an old Fox a new trick!

2. This mostly-stock 1993 Mustang LX is a rare sight these days. It was a prime candidate for Vortech’s updated entry-level supercharger kit.

3. We began by removing the alternator.

4. Then, we unbolted the alternator bracket and smog pump.

5. Next, we removed the crankshaft pulley and slid the Vortech supercharger pulley inside.

6. Then, we bolted the pulleys to the harmonic damper using the supplied bolts.

7. Next, we attached the Vortech supercharger bracket to the engine.

8. To make room for the supercharger, the Vortech bracket relocates the alternator lower on the engine.

9. Next, we reinstalled the air pump on the Vortech bracket.

10. Next, we installed the Vortech accessory belt tensioner bracket.

11. Then, we installed the stock belt tensioner and belt.

12. The Vortech system uses a Fuel Management Unit (FMU) to increase fuel supply under boost. We connected the supplied hose between the return line on the engine and the FMU.

13. We mounted the FMU to the inner fender and connected the boost reference port to the vacuum tree on the firewall.

15. Next, we bolted the belt idler pulley and bracket to the supercharger.

16. Then, we installed the supplied supercharger belt.

18. Next, we assembled the mass air flow meter (MAF), air filter, and flexible hose and positioned it in place behind the supplied Vortech air filter cover.

19. After mounting the MAF assembly to the inner fender panel, we attached the flexible hose to the supercharger inlet elbow.

20. Because our car had a Holley 75mm throttle-body, the supplied coupler was too small. But, we used a section of it as a spacer to adapt it to the 75mm coupler’s inside diameter.

21. Then, we attached the discharge tube to the outlet of the supercharger.

22. Our spacer made up the difference in diameter between the Vortech discharge tube and the 75mm throttle-body.

23. After draining about a gallon of coolant, we removed and trimmed the radiator hose per the instructions. The supplied tube reroutes the upper radiator hose to clear the supercharger.

24. All V-3 units come pre-filled with lubricant from Vortech. However, it is a good idea to check the fluid level with the handy dipstick before running it for the first time.