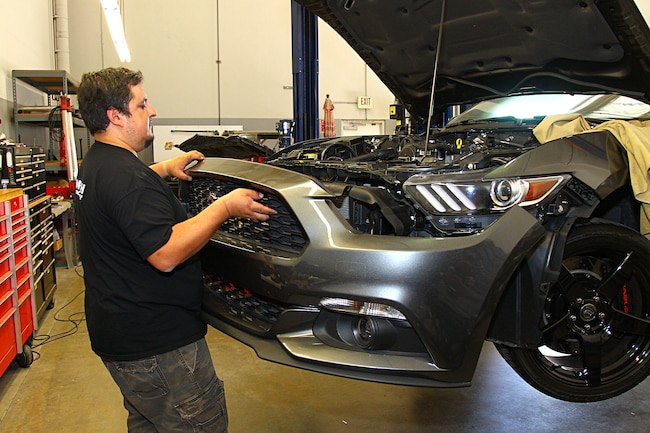 How do you make a boosted car more fun? Add more boost. This EcoBoost Mustang already had a turbo on it, but Vortech decided to build a twincharged Frankenstein with the street manners of a factory 4-cylinder, but more tire-smoking power.

This 2015 EcoBoost 2.3L Mustang, according to Vortech, now makes power that rivals a 5.0L GT, while appearing and feeling stock. “The car is docile and drives like a stock Mustang when cruising around town,” said Brian Ellis of Vortech sales and marketing. “But it pulls like a freight train when you put your foot in it.”

The supercharger is a V-3 H67B centrifugal supercharger, which was designed for high-revving, small displacement engines. The Mustang is essentially stock with factory internals and 91 octane in the tank. Vortech did opted for a high-pressure Livernois Motorsports Firestorm Fuel Pump.

Unfortunately, Vortech doesn’t currently offer this upgrade for EcoBoost Mustangs, but created this as an in-house project, experimenting with twincharged possibilities.

Here’s how to build a twincharged Mustang:

1. Originally this Mustang was used for research and development of Vortech’s Charge Cooler upgrade, which is currently available for EcoBoost Mustangs. We began by removing the front bumper to install the Charge Cooler. Removal included top bolts and front undercarriage removal.

2. The top and bottom plastic louvers, which direct airflow into the radiator, were removed to clear the new, larger intercooler.

3. The Charge Cooler is slid into place behind the factory metal bumper.

4. The Charge Cooler is bolted down and the top louver is reinstalled. The bottom louver remains off.

5. Vortech’s discharge tube C is installed through the passenger side of the vehicle.

6. Discharge tube D is now installed on the driver’s side. Both sides are tightened and the TMAP sensor is reinstalled on tube D.

7. Both tube C and tube D clamps are snugged and the cooler is bolted in place. The Vortech Charge Cooler is significantly larger than the factory unit, and proven to support over 900rwhp.

8. Moving into the engine compartment, we removed the intake tube, airbox, overflow catch can and radiator hoses. This gained easy access to the drive pulleys.

9. The supercharger drive-crank pulley is installed and torqued in place with three bolts.

10. With the airbox and intake removed we finished the intercooler install by connecting the Turbocharger discharge tube E with the silicone bump sleeve on the throttle-body side.

11. This A/C Pump is re-mounted using a Vortech bracket. The new bracket features a threaded boss that mounts to the supercharger plate.

12. The top-mounting block is installed.

15. The bottom bolts are tightened, while simultaneously snugging the top bolts in sequence, to allow for any shifting from the bracket.

16. The top bolts are tightened to the adapter block at the top of the engine.

17. After the belt is mounted correctly, the idler/tensioner pulley is loosely installed.

18. The turbo duct is installed with a 2.75-to-3-inch reducer sleeve. This mates the smaller inlet of the turbo to the larger outlet of the supercharger. It enters from the driver’s side, but snakes around to the passenger side.

19. Turbocharger discharge tube B is attached to tube C using a bump sleeve and clamps. Here you’ll see the new Vortech Maxflow Race Blow-Off Valve; this is vacuum actuated (not boost actuated), and is always closed under boost, and opens under vacuum. It is a safety valve, to bypass (or “blow-off”) excess charge air when not under hard acceleration.

20. Turbocharger discharge tube A is attached to the discharge side of the turbocharger, and the other side to tube B with the appropriate coupling sleeves and clamps.

22. An intake vacuum line is routed to the Vortech Maxflow Race Blow-Off Valve.

23. We reinstalled the factory emissions hoses

24. The OEM airbox is also reinstalled.

25. The kit is done but we wanted the factory look, so the stock radiator shroud and engine cover are reinstalled.

26. Shhh, there’s a supercharger hidden under there. From afar the engine bay looks stock. The V-3 H67B centrifugal supercharger has an internal oiling system, so there’s no need to plumb special oil lines. There’s an easily accessible oil drain bolt, which allows the oil to be changed while mounted on the car.

27. Despite the system being capable of more, Vortech has limited the boost to a combined total of 17.3 psi, as the car has stock internals and runs on pump gas. The supercharger itself is capable of up to 14 psi, with a maximum flow of 750 CFM and max power rating of 525 hp. The set up produces the best of both worlds, with a strong torque curve that comes to life when you liberally apply throttle. It only leaves us asking, what can we supercharge next?