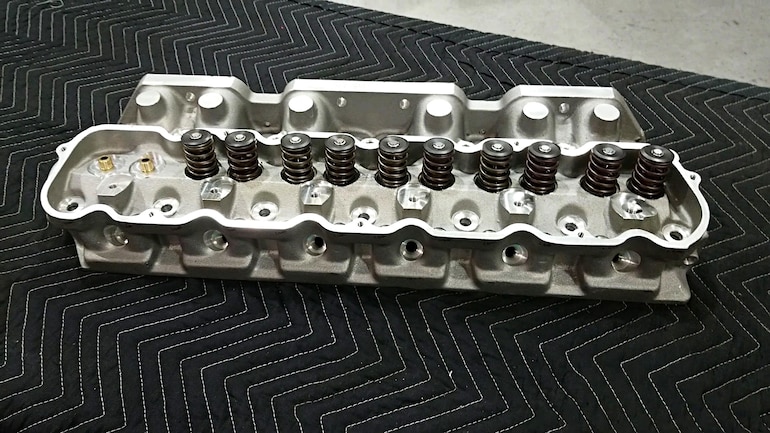 Since the first Mustangs and Falcons were purchased secondhand, gearheads have been pondering whether to build up the straight-six workhorse economy engines or swap out the six in favor of a V-8. The complexity of the conversion to V-8 power, while much easier in the ’60s cars, was still a little much for some, and the performance upgrade parts for the six-cylinder were sporadic at best. Plus, there’s something to be said for being different and building a smooth-running six-banger.

While there is a six-cylinder performance group today, their part selection has been a blend of old 1960s tech and parts that appear and disappear on a regular basis. One of the reasons for this is very simple: the straight-six was simply not designed for real performance. It was designed to be an economy workhorse that provides reliable day-in and day-out effort getting the small vehicles to and from their destination. They are proportionally heavier than their higher-revving V-8 cousins, with stout blocks and bottom ends that are bulky because Ford didn’t need to shave tenths off at the track. The biggest downfall of the six-cylinder was the head itself. With its cast-in uneven port length cylinder head and center exhaust outlet, it was clearly designed for ease of manufacture and not for any kind of performance use. Until now.

Vintage Inlines from Detroit, Michigan, has finally made available an aluminum cylinder head for the inline-six that will really open up these engines to the performance world that was not there before. The story about how this cylinder head came about is fairly long. Mike Winterboer was the owner of Classic Inlines, a company that specialized in six-cylinder performance. He had worked in developing an aluminum head down in Australia, with the intent of bringing it to the States. Mr. Winterboer passed away in 2015. He did finish the project, but it is unknown how many were available or sold. With his passing, a large force behind the six-cylinder performance movement faded.

Enter Matt Cox and Vintage Inlines. Matt is a long-time six-banger enthusiast and was able to acquire some of the inventory and items from Classic and keep the flame going. Although the tech was acquired, getting foundries to work with you can sometimes be a challenge. There are all the issues with working on something new and working it to make it a viable product. Matt was able to contract with the original foundry, and even though there were a few “relearning” issues, they were able to produce the cores. We have all seen press releases about a new product that turns out to be a fishing expedition and doesn’t really exist. Vintage Inlines has stuck to it and has succeeded, and the stack of heads on a cart during our visit was proof that this is for real and a huge leap forward for the inline enthusiast.

Head Design
The Vintage Inlines head is based on the Australian 250-2V head, which came with a detachable intake manifold, the single most important improvement to the cast-iron originals. The intake ports were raised in the head to provide better flow to the larger valvetrain. Weight savings is nearly 50 percent, with the stock head checking in at 46 pounds and the Vintage head at a svelte 26 pounds. Care was taken to allow for stock components like valve covers and rocker arms, and even the stock exhaust manifold to bolt up to the head. The only thing that was changed was the water temp sender, and that the head uses ARP head studs to attach the head to the block.

Intake
With the detachable intake design, you now have a means of running a much more balanced intake arrangement. The original ran along a single pipe and dumped into each port. Right angles are bad for flow, and the center cylinders flowed much easier than the ones on the end, which took a much longer path. In the ’60s Offenhouser designed a 3x1 barrel carburetor setup that is still available today (Vintage Inlines part number OFF-200-3X1) that attempted to curb the problems of end cylinder starvation, and it does work somewhat. Adapters for two- and four-barrel carburetors are also available, but they don't get around the inherent problems of the flaws in the cast-in intake.

Vintage Inlines sells a spider-style, bolt-on intake designed for a standard four-barrel carburetor to mate specifically with the alloy head with a much smoother sweeping runner design to even out the flow to the outer cylinders. They have also installed fuel injection bosses on the tops of the raised intake port, making sequential fuel injection a reality. The stock Australian mounting points mean specialty goodies from Australia, like Weber carburetion, are also possible, and stack injection is a very easy fabrication.

Combustion Chamber
The stock head has an open chamber design that varied between 52 cc to 62 cc in size. Coupled with dished pistons it didn't make much compression. The new heads are a closed-chamber design with chamber size of 55 cc. Coupled with a flat-top piston this will make a compression ratio in the range of 9.3-9.4 to 1.0. Perfect for today’s watered-down fluid we call “gasoline.” Vintage leaves plenty of material available for unshrouding of the valves and increasing the chamber size if desired.

Exhaust Ports
Another big detriment to the stock heads was the exhaust ports. The center two exhaust ports came together in a Siamese configuration, probably for no other reason than to make it cheaper to manufacture. This big space not only allowed for pressure differences between the center ports and outer four ports, it allowed for additional heat to be retained in the area right under the carburetor, heating up the fuel and causing some warping problems with the head. Aftermarket spacers were devised to solve the problem with the stock heads, but the aluminum head has been cast to eliminate this problem entirely. Ports are healthy and still have enough material to port-match to your headers. As noted before, the awful stock exhaust manifold single outlet will actually bolt up to the cylinder head, if you found yourself having to do that.

Valvetrain
Since the six-cylinder was an economy engine, it was fitted with single-coil valvesprings and those not-for-performance two-piece retainers. The new heads come with a choice of a single spring with a damper or a dual spring, depending on your application, and Clay Smith one-piece spring retainers. The bigger valves are Port Flow stainless and the heads are fitted with steel valve guides. The head is designed to be compatible with the stock rocker arm shaft and rocker arms, but can be fitted with full roller rockers should the need call for them.

Production
The heads are now being cast on the West Coast and are being shipped to Automotive Machine, in Fraser Michigan, for all the machine work needed to prep them for sale. Just like any other aluminum head, an engine builder can massage these heads for even more performance, with the exception of the area around the valvesprings. This has been optimized for full use of the newer springs. As mentioned before, all your stock or aftermarket goodies like headers, valve covers, and chrome goodies will come right off your old engine and bolt to this one.

As far as performance, the ball has just started rolling on the new heads and they are being delivered. It is not unheard of to make 500 horsepower with all that typical inline torque, and there is a car currently running in the mid-10s with this head and turbocharging—so real performance and even more potential future performance is in your hands. Before you start looking at that list of items to swap a V-8 into your Mustang, take a good look at the new Vintage Inlines aluminum cylinder head for your sturdy six. It gives you all the benefits of the V-8 and inline-six combined.

It has been a 10-year journey, but the aluminum head for the 200 and 250 inline six-cylinder engines is finally here. Vintage Inlines is making the performance upgrade a reality to all the six-cylinder performance junkies, and we should now get a wave of new products to enhance this gem even further.
The head is based on the Australian 250-2V head that has a removable intake manifold. The ports are raised on the aluminum version to increase velocity.
With the removable intake, the new Vintage head eliminates all the issues associated with the horrible design from the factory (right). Small runners and right angles are gone.
Vintage Inlines has a free-flowing intake manifold that bolts to the new head with a standard four-barrel carburetor base. Adapters to run two-barrel carburetors and Weber carburetors are also available. With this setup you can also run fuel injection with a carb-style throttle body.
Also available is a manifold that adapts three side-draft Weber carburetors to the head for maximum port equalization.
The four-barrel manifold is cast with bosses for running fuel injection, nitrous, methanol, or whatever you want to port to the intake.
The head is also cast with bosses for injectors, so sequential injection is a real option for these heads.
Combustion chamber comparison shows the closed-chamber design (top) versus the original open-chamber head (bottom). There is plenty of material around the visibly larger valves for further shaping.
Combustion chambers check in at 55 cc and include stainless steel 1.800-intake and 1.500-inch exhaust valves. That’s bigger than stock 289 V-8 valve sizes.
Steel valve guides are used in the production heads and the ports have plenty of material for porting.
The stock head on the bottom shows the Siamese center exhaust ports that really caused issues on the exhaust side. The aluminum head eliminates this problem by casting the ports separately.
Matt states the exhaust ports are fine for most applications, but there is plenty of material to port-match to your headers. Stock manifolds will also work.
We have had many different six-cylinder header designs, and all of them work as advertised. The aluminum head will accept any headers that will fit the stock heads, like these stainless steel 3 into 1x2–style headers from Vintage (PN FSP-200-DOH).
Valve seat areas are maximized to handle the bigger springs. Clay Smith retainers are used exclusively.
Automotive Machine in Fraser, Michigan, has been handling the final prep on the batches of heads that come in. They have experience in both small runs and high performance engines; the exact combination needed to get these to market. These heads have been long awaited, and once they hit the street in numbers you can bet more performance goodies will show up on the market.