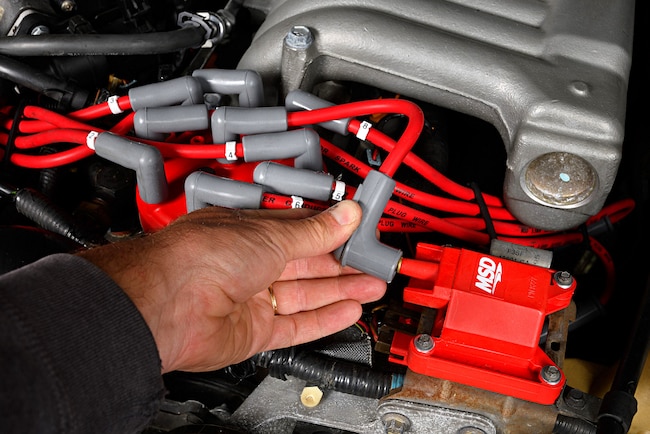 Worn ignition component gremlins are mysterious little buggers. Ignition misfires can be confused with fuel mixture or delivery problems. Even ambient humidity can affect the ignition system—making a misfire’s symptoms seem random and difficult to pinpoint.

Though our 1995 Mustang GT had a fresh set of spark plugs, the age on the rest of the ignition system was unknown...potentially original. With over 100,000 miles on the odometer, the spark plug wires, ignition coil, distributor cap, and rotor were due for retirement. Why does it matter? As a distributor cap and rotor wear, the gap between the electrodes increases, which requires increased voltage before the spark jumps the gap. This increased voltage can cause the spark to jump other gaps, such to the leading or trailing terminals on the distributor (known as “crossfire”). Also, the spark plug wires can arc between each other, or the spark can never get to the right plug. These all result in shuddering misfires. Fortunately, replacing these aging ignition components is straightforward and MSD ignition makes high performance parts that are bolt-on replacements.

With the older pushrod 5.0L engine in a newer SN95 chassis, 1994-1995 Mustang GTs are oddballs. MSD is one of the few manufacturers that offers a true, high-performance replacement spark plug wire set made to the factory spark plug wire lengths. Their 8.5mm Super Conductor wires (PN 32209) feature an industry-leading 50 ohms of resistance per foot. Dual crimp terminals grasp both the conductor and the jacket to keep the wires securely connected.

MSD’s Blaster TFI coil for TFI ignitions (PN 8227) is equally impressive. It features a unique 85:1 turns ratio and lower primary resistance (0.68 ohms) than the factory coil. It works with both MSD and factory ignition systems. The Blaster TFI coil can output 44,000 volts if necessary, virtually guaranteeing ignition in even the most inhospitable combustion chambers.

Follow along as we breathe new life into our aging Mustang’s ignition system.

2. Rather than just red-colored generic replacement parts, the MSD cap and rotor set is manufactured to MSD’s specific standards. They feature custom, heavy-duty construction and a spark plug wire retainer (though we didn’t use the retainer with our wires).

4. The Blaster coil for TFI ignitions (such as our 1995 Mustang) works with both aftermarket and factory ignition systems. It features a unique 85:1 turns ratio and lower primary resistance (0.68 ohms) than the factory coil.

6. We unclipped the distributor cap to check the condition of the rotor.

7. This rotor is toast. Notice the erosion of the electrode, especially toward its leading edge. Fortunately, there is a pretty even pattern across the face of the electrode, which means the distributor and rotor are phased well. (An improperly phased distributor will concentrate the wear at the tip of the rotor, and even allow the spark to jump to the leading or trailing terminal—a phenomenon called “crossfire.”)

8. The corresponding terminals on the distributor cap are also eroded after years of use. Again, note that the wear is relatively even across the terminals, indicating the distributor pickup and cap are phased well.

9. We removed the spark plug boots at each of the cylinders.

10. With the wires still connected to the distributor cap, we removed the wires as an assembly.

11. To make sure we replicated the fitment of the factory wires, we measured and recorded the length of each cylinder’s wires. (Note the firing order of late-model 5.0L engines is 1-3-7-2-6-5-4-8.) This procedure saves time and frustration later.

12. Next, we organized the MSD Super Conductor wires in order of length (the coil wire is at the bottom).

13. Using the factory wire lengths as a guide, we connected the wires to the MSD distributor cap—shortest wires to cylinders 2 and 5, next longest on cylinder 3, and so on. The longest wires were sent to cylinders 4, 7, and 8.

15. Next, we removed the spark plug wire separators from the factory wires.

16. We transferred the spark plug wire separators to the MSD Super Conductor wires.

17. Next, we removed the OEM coil and connector.

18. After connecting the MSD Blaster coil to the OEM wiring harness, we used the original screws and included washers to fasten it to the factory bracket.

19. Next, we installed the MSD rotor in the distributor.

20. Then, we snaked the spark plug wires on each side of the engine and snapped the distributor cap in place.

21. With the wires routed, we connected the wires to their corresponding spark plugs.

22. Finally, we connected the coil wire to the MSD Blaster coil.

23. Besides giving our 5.0L solid spark, the MSD Super Conductor wires, Blaster coil, and distributor cap brightened up the under-hood environment of this 1995 GT.