Upgrade Your Mustang’s Cooling by Fitting a 24-inch Radiator 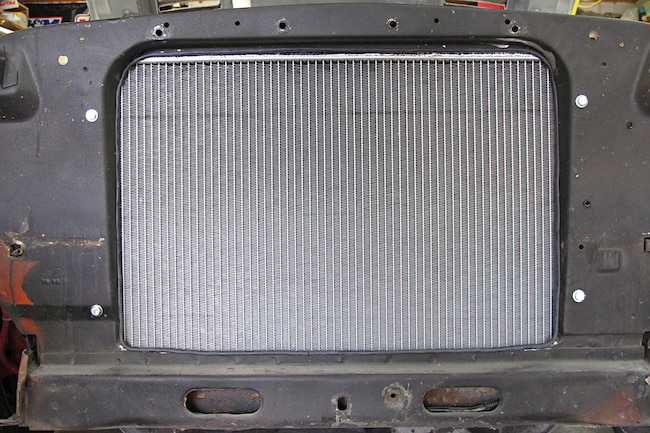 We’ve said it more times than we care to count over the years—the early Mustang cooling system is marginal at best. It may have worked fairly well with a stock engine and the cooling system in perfect/new condition; but come on, it’s been five decades and most of our Mustangs have seen an engine rebuild or two, or have been repowered with engines making twice what the stock engine made. Retaining the stock cooling system is just asking for problems.

Using a high-flow water pump, electric fan(s), and more all help, but what the system really needs is more capacity. The only way you’ll get more capacity, and therefore more cooling, is with a larger radiator. Don’t be fooled by larger cores either. Often going too big, like with a four-core radiator, will actually impede cooling since the fan cannot pull the air through such a thick core efficiently. We have used and recommend modern two-core aluminum radiators, the wide two-core construction does not hurt airflow through the core and you don’t have to worry about radiator-to-engine fitment issues with pulleys/fans/etc. either.

That said, just replacing the stock copper/brass radiator with a quality two-core aluminum, while helpful, still will not net you the larger capacity and cooling area a hot small-block needs to stay cool. One such solution is to fit the wider “big-block” radiator used in the 1967-1968 Mustang. The ’67-’68 Mustang core support opening is larger than the ’65-’66 opening to accommodate this larger radiator (the small-block radiator used bolt-on block-off plates on each side). To fit the larger 24-inch core big-block radiator to the ’65-’66 Mustang requires you to do one of two things: weld in a ’67-’68 core support or trim the existing support. Welding in the ’67-’68 core support is not a big chore if you’re already doing sheetmetal work, as the core support overall dimensions are similar and it will weld right up to the inner fenders and provide you with the larger opening with just a few modifications. However, if your Mustang is a running/driving example and doesn’t need a whole new core support, you can carefully measure and cut your existing support for the new opening size.

The ’65 Mustang you see here is in the middle of some custom body mods, including Mustangs to Fear’s new fiberglass front valance and hood, along with a complete repaint. The core support was in perfect shape, so the owner opted to simply trim the existing metal needed to fit the big-block radiator. While the owner purchased a nice two-core down-flow radiator for this upgrade, if you’re willing to fab some mounting brackets or trim the core support a little more, we highly suggest a custom cross-flow radiator for more surface area, cooling, and capacity.

1. Starting with an aluminum version of the ’67-’68 big-block radiator, upper and lower bolt-on mounts, and a set of hoses, we weren’t sure if we’d use everything, but wanted to have the stock parts on the shelf in case that’s the direction we went in (as others have used the stock saddle-type mounting).
2. While not absolutely necessary, we opted to remove the headlight buckets/grille (it’s one piece on the Mustangs to Fear fiberglass version) and lower valance to provide clear vision for photos and for any measuring/cutting.
3. Remove any further obstructions that might get in your way of measuring and cutting the radiator opening, including wiring harnesses, horns, and so forth. If you have an A/C condenser you should be able to leave the hoses connected and gently move the condenser out of the way (tape cardboard over it to protect the condenser fins).
4. Drain the old radiator and remove the inlet and outlet hoses.
5. Unbolt any fan shroud and mounting brackets and remove the four radiator retaining bolts. We also had a small electric pusher fan on the front of the radiator to remove before we could lift the old radiator out of the engine bay.
6. Where we’ll be cutting the opening to enlarge it will be on this inner fold of the stock ’65-’66 opening. You can tape the edge or mark with a piece of chalk, but essentially if you cut right on that stamped edge you’ll be fine.
7. A quick test-fit of the radiator verified what we’d be cutting away would allow full airflow exposure to the new, larger radiator core. Note that the larger radiator core will require slight relocation of the voltage regulator and either a small racing battery or relocation of the battery to the trunk (which this car already had). Alternatively, if you’re welding in the big-block core support you could weld in the ’67-’68 battery apron as well for proper clearance.
8. There are several options for trimming the core opening, including plasma cutter, cutoff wheel, jig saw with a metal blade, and more. This pneumatic saw made quick work of the cutting job for us.
9. After the initial cut was made painter’s tape was used to mark the final cut line, and then the saw was used again to make these cuts as well. Once finished the rough edge was hand-filed.
10.After some mocking up of parts the owner opted to direct-mount the radiator using the welded on flanges instead of the OE saddle mounts. Measurements were transferred from the radiator to the core support and four mounting holes were drilled.
11.Test-fitting the radiator with stainless mounting bolts and lock nuts allowed us to determine the proper spacer thickness (to prevent bending the radiator flange during final installation).
12. 3/8-inch OD aluminum tubing was used to create the four spacers required.
13. Before fitting the radiator for the final time a length of rubber hose was split and installed over the edge of the enlarged core support opening to provide an airtight seal, forcing all incoming air through the radiator core, and to prevent metal to metal contact that might eventually wear into the radiator and cause a leak.
14. The final fitment of the new 24-inch core big-block radiator. All that the owner has left to do is to determine the proper hose fitments for his 200ci inline-six engine, as the radiator inlet and outlet bushings are larger on the big-block radiator and farther out/away than the stock radiator location.
15. Since this ’65 is in the middle of a repaint the radiator was pulled back out, as the engine bay is going to be painted as well. With the new radiator out and before it was put back in the box for safe keeping we laid the stock radiator over it. You can clearly see that the big-block radiator offers roughly a 25 percent increase in core size.