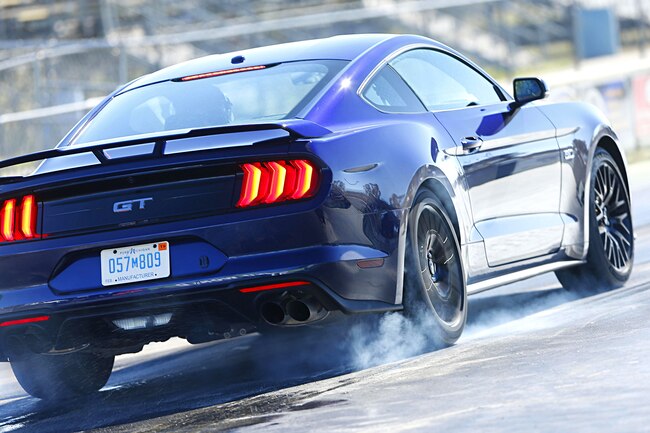 The Internet is blowing up as enthusiasts speculate whether a factory-stock 2018 Mustang GT can run 11s. A few have run 12.0, some even 11s, but you never know who's stock and who's not. We know the outgoing 2017 435 horsepower Mustang is capable of high 12s at about 114 mph, now the GT has 460 horsepower and either a revised six-speed manual or the new ten-speed SelectShift automatic transmission. Is 30 hp and a few extra gears enough to bring home an 11-second timeslip?

Our story begins December 10th in Detroit on a bitterly cold day. Normally, we'd obtain a press loaner from the local fleet, which is based in Miami, then have a week to photograph and test the car. Unfortunately, no 2018 Mustangs have made it down here yet and we we're running out of time before the tracks close for the holidays. Ford extended an offer to let us pick up a GT in Michigan. The catch is that we'd have to drive it to Florida. Naturally, we jumped at the chance.

Unlike our 2018 GT drive report, which took place on curvy canyon roads in Southern California, this trip was about getting back to Florida and finding an open dragstrip ASAP. And with that, we were southbound and down.

Firing the car, our first take away is the amazing exhaust sound. Anyone who orders the Active exhaust will savor the goodness of every note. Upon initial start up it comes alive with a 'raaappp' and a cackle before settling into a smooth, but aggressive idle.

On the road the Mustang was a dream. We took advantage of the Shaker audio, and the navigation guided us down I-75. We found the GT seats to be supportive and comfortable, offering unlimited adjustment, which is nice for the long haul.

We'd been watching the weather all week and as luck would have it, Florida was experiencing favorable drag racing conditions. In most cases, this would simply mean no rain, but in December, it meant cool, dry air with high barometric pressure.

The two closest track are Orlando Speed World, which runs a test and tune on Wednesday evening and Bradenton Motorsports Park, which runs Thursday nights. Both tracks hook well. Even sweeter, VMP Performance had a track rental at OSW Wednesday before the track's own test and tune, and they invited us to run.

Working on little rest, we were back in the GT for the hour and forty-five minute drive, and by 10:00 am we were ready to unleash the 460 horsepower 5.0L Coyote. Our plan was to run it in 100-percent showroom condition all day, and work on driving technique to improve ET. Vehicle prep included bumping the front tire pressure to 45 psi and dropping the rears to 28. That's it, we never even iced the intake.

OSW's crew swept the track and sprayed the first few hundred feet of the quarter-mile. Weather conditions were as follows: 5-7 mph cross/tail wind, temperature was 58-64 degrees, humidity 30-percent, and the barometric pressure was 30.10. This equated to a density altitude of about sea level, which climbed to roughly 350 feet by 4 pm. In drag racing terms, this was optimum or mine shaft conditions.

At 10:14 am we slipped behind the wheel, fired the engine, selected "Drag Mode" and shut off the traction control. We approached the line, drove around the water puddle and backed into the box, only wetting the rear tires. We pulled the shifter into "Sport" mode to control the shifting during the burnout, and while holding the brake lightly with our left foot, we fed in throttle and got the tires smoking. On this run we upshifted into 6th gear using the steering wheel mounted paddle shifter, waited a few moments for smoke, and drove out of the burnout.

We stopped short of the staging beams, clicked the shifter into "Drive," and lined up in the groove. With the Pre-Stage bulb lit, we pressed the brake, rolled in a touch of throttle and carefully inched the Stang into the Staged beam. We wanted to be staged as shallow as possible with the engine at 1,800 rpm for launch. Reaction time was not a concern. The tree dropped, we traded feet, releasing the brake and mashing the gas in a smooth, but quick fashion.

The rear squatted and acceleration came on strong. It was instantly apparent that the ten-speed is a big plus. The engine sings and the revs scream to the 7,500 rpm redline. It happens in a hurry, too. Second gear hit with a kick in the back and a little spin from the tires. It didn't hamper acceleration, though, which is far better than a stock 2017 Mustang. The magic lies in the ultra-tight gear spacing, which keeps the Coyote in the heart of the powerband. It's literally rev, shift—all the way to 7th, which clicked in roughly 200-300 feet before the traps.

The first past was done in a flash, or more technically in 11.947 seconds with a trap speed of 119.25 mph. That's right, 11s the first pass down, in absolutely 100-percent stock trim. It's hard to believe running 11s can be that easy, the question now, is there more?

Run three came at 11:20 am. The weather remained stable, so we tried a tad more rpm for launch. Despite our gentle application of throttle while power braking, revving to 2,200 rpm caused the back of the car to squat excessively and the tires wanted to overcome the brakes and spin. Feeling this, we backed off and let it rip before the car lurched on its own. We were able to hold 2,100 rpm, and it liked the extra rpm. Launch was hard, the clock showed a 1.892 sixty-foot time and we held on while the Mustang accelerated through the gears. The Active exhaust spit out an incredible song, giving us a sensation of pure acceleration and speed. As you may expect, the 1.89 short-time translated into a best-of-the-day pass, running 11.868 at 119.05 mph.

With an hour to go, we let the car cool all the way down. We gave a quick call to former MM&FF answer man "Yo" Ken Miele, who keeps tabs on who's running quick. Ken said it's been rumored the quickest posted time for a stock Mustang was a 12.02, he's also heard of a new Camaro SS running 11.84 in perfect conditions.

With the session ending, we dropped tire pressure to 26 psi and hopped in the Kona Blue GT. We fired the 5.0L, selected Drag Mode, turned off TC and did a short and sweet burnout. Cylinder head temp was showing 160 on the gauge after the burnout (about 20 degrees lower than the previous runs); we didn't want to build heat so we staged, powerbraked to 2,000 rpm, and cut it loose immediately.

The Mustang dead hooked and shot from the gate with fury and purpose. The Mustang produced a 1.881 sixty-foot and it was flat-out ripping, snapping off gears like a sport bike. There's action all the way down the track with the ten-speed, and we were enjoying the ride. We steered as little as possible, so as to cause minimal drag and we pushed the throttle to the mat. Finally, it crossed the line and the board flashed the results—11.835 at a staggering 119.51 mph. Yes, mission complete.