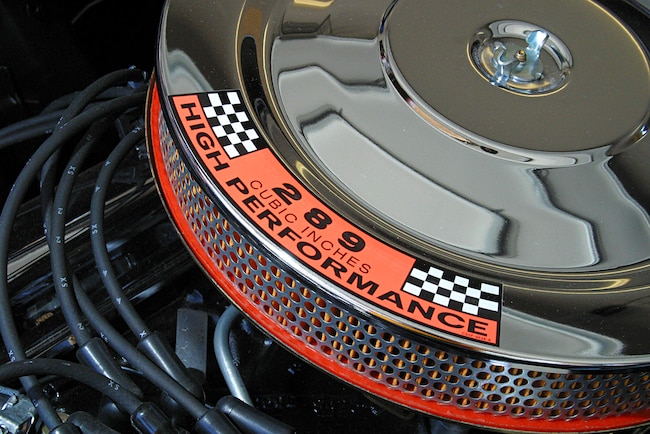 The 2018 Mustang GT owes its very existence to the pioneers that started it all 54 years ago. Thirty-two valves, charge motion, variable cam timing, and a dizzying redline on the order of 7,000 rpm with Ford’s high-tech Coyote. Wow! We’ve come a long way since pushrods, flat tappets, flattop pistons, cast iron, and small intake and exhaust ports. Yet, were it not for the Mustang’s very first high-performance V-8, the 289ci High Performance, we might not be where we are today.

The small-block Ford, known originally as the 90-degree Fairlane V-8 introduced in 1962 in displacements of 221 ci and 260 ci, was really impressive for its time. It was compact, lightweight, fuel stingy, and made a lot of power for its size. It wasn’t long before Ford engineers and product planners understood this tiny little V-8 needed greater displacement and the infusion of attitude.

The earliest known “K” VIN Mustang is 5F07K100148, a pre-production Dearborn unit built specifically for Henry Ford II prior to the start-up of mass production at Dearborn on March 9, 1964. Aside from HFII’s one-of-a-kind Hi-Po Pony, the earliest known “K” VIN production Mustangs were bucked and built in late June of 1964 at the Dearborn, Michigan, assembly plant according to Scott McMullen, a Hi-Po historian who has done a tremendous amount of research on early K-code Hi-Po engines.

Scott says, “I am not aware of any other pre-production ‘K’ units with VINs besides 100148, though there are several engineering test cars that were featured in magazine articles. The earliest of these test cars was a convertible driven by Dan Gurney in February of 1964 that he referred to as a ‘prototype for production models.’ Test units appear to have been built at different times up until June of 1964.”

Scott adds, “The next batch of ‘K’ VIN units have scheduled build dates of June 7, 8, and 9 of 1964.” However, the evidence Scott has collected from these production units suggests the engines and corresponding bodies were built well after the scheduled build dates on the warranty plates. “The VINs are not necessarily in order with the date codes, so you have to look at other evidence to narrow down a ‘must have been built after’ date. VINs are not always in order with the date codes.”

Based on what Scott has told us, the first production “K” engine code Mustangs were built in the last week of June. Despite a lot of chatter through the years indicating some May Hi-Po units, none have surfaced to date.

For more than a half-century, the 289 High Performance V-8 has been more myth than fact. What makes it “high-performance” isn't unusual or rare. What Ford did to the 289 isn’t any more out of the ordinary than good, old-fashioned, hot-rodding trickery. The 289 High Performance V-8 is a warmed-up 289 with a hotter solid-lifter camshaft, cylinder heads designed for high rpm, a dual-point ignition engineered for higher revs, cast-iron exhaust headers, and a wider harmonic balancer to deal with increased reciprocating mass down under.

Unless you're restoring a K-code 1965-1967 Mustang or are interested in building an authentic 289 Hi-Po small-block for your non–K-code Mustang, there isn’t a whole lot of difference between a 289 High Performance V-8 and your standard vanilla 289-2V. What makes the Hi-Po a big deal is authenticity when building a K-code Mustang with the real thing between the shock towers.

We’re going to show you the basics of the 289 High Performance V-8 with quick facts you can use in your engine building and Mustang spotting. Keep in mind that there are some exceptions to the identification rules for K-codes that were built prior to June 29. And because we’re dealing with a lot of production unknowns from a half-century ago, be prepared to find just about anything out there.