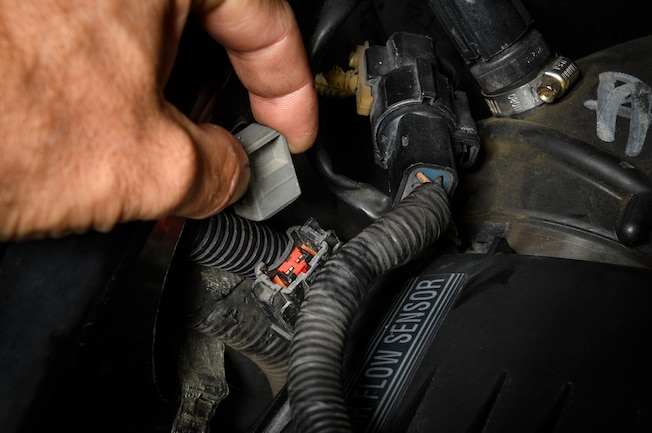 Ignition timing is like seasoning: some is good, but too much ruins the results. Bumping up the ignition timing on pushrod 5.0s is a time-honored trick to wake up the under-hood lump. The EFI system on 1986-1995 pushrod V8 Mustangs throws a few curve balls that newcomers may miss, so we highlight how to do it properly.

1. When enthusiasts set ignition timing, they’re usually referring to base timing, or the timing without any additional advance based upon engine rpm or vacuum. Engines equipped with carburetors usually have a vacuum line to the distributor that advances the timing under light engine load. On engines with EFI, the computer handles ignition advance, so the computer needs to know you’re tying to set the base ignition timing, and to leave any additional advance out of it. This is done by pulling the “SPOUT”, or “Spark Out” connector. On most Fox-bodies, the SPOUT connector is located near the distributor, but on our SN95, it was near the mass air sensor on the passenger side inner fender. Stick the SPOUT connector in your pocket so you don’t lose it!

2. Setting base ignition timing is done by twisting the distributor; it’s held down by a ½-inch bolt and clamp. You can use a swivel socket or a distributor wrench (shown) to loosen the bolt enough so you can turn the distributor. Spinning it clockwise advances timing, counterclockwise retards the timing.

3. Next, connect the timing light and wrap the inductive pickup around the #1 spark plug wire. If your wires aren’t numbered (or some knuckle-dragger didn’t install the numbered wires correctly), #1 on Ford V8s is the front, passenger side cylinder.

4. Ignition timing is observed by lining up the timing pointer to marks on the harmonic damper (the hunk of steel behind the crank pulley). If your damper is old and crusty, it’s easier to read if you mark it beforehand…but where you mark it depends upon the type of timing light you have. If your timing light doesn’t have a means to set advance on the light, you’ll need to mark the damper at your desired timing setting (say, 13 degrees). But, if your timing light has an advance function, put a line at the zero mark and use the light to adjust the advance.

5. With the light connected and the damper marked, start the engine. We set our timing light to 13 degrees and twisted the distributor until the pointer was aligned with the mark on the harmonic damper. (If the timing mark jumps around a little, don’t worry. That’s the timing light getting a little confused. Some ignition systems fire multiple sparks, and the timing light may miss the first spark in a series.) The amount of timing depends on a lot of factors, but most 5.0s run well between 12 and 14 degrees of base timing. If you ear any pre-ignition (detonation or pinging) under heavy load (a sound like nuts and bolts rattling around in the engine) run higher-octane gas or back off the timing. Detonation, if allowed to continue, will damage the engine. When you’re done, turn off the engine, tighten the distributor hold-down clamp, and reinstall the SPOUT connector.