Add 45% Power With a Bolt-On Supercharger

Blowin' in the Wind: A Quick and Easy Way to Add Serious hp to a Vintage Mustang With a Blow-Through ProCharger Supercharger 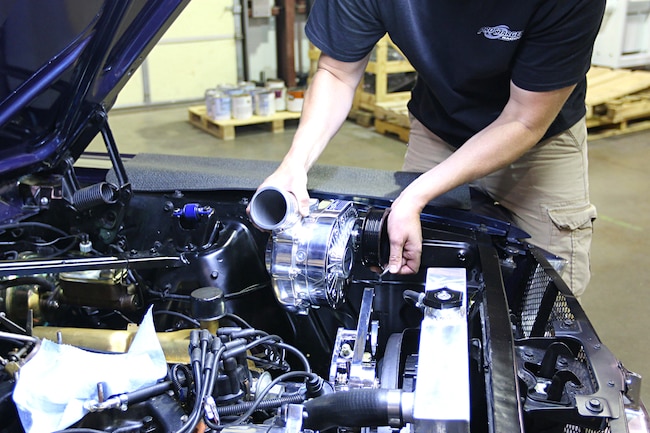 In the quest to build horsepower, there are several different ways to go about it. You can build an engine specifically to make big power, or you can bolt on a power adder of some sort, such as nitrous oxide, a supercharger, or a turbocharger. Building an engine with hp as the ultimate end goal involves a lot of compromises in the name of durability and drivability. Generally speaking, the more power you make in a naturally aspirated (non-power adder) engine, the less drivable it is and the worse the fuel mileage. The advantage to having a power adder is that you can build a fairly mild engine to satisfy the long life, decent fuel mileage, and daily drivability standards, then use the power adder to radically increase the hp—only when you need it.

Of the three options, nitrous oxide is the least expensive (initially), and generally, it’s the easiest to install. The disadvantage is constantly having to refill the nitrous bottle, which adds cost over time. And when the bottle is empty, you have no power adder. A turbocharger involves very complicated induction plumbing and the associated expense. Plus, a turbo builds a lot of heat both underhood and in the intake tract. A supercharger can therefore be considered the ideal route to extra power, especially in a car like our vintage Mustangs. Most of us already have a decent engine in our cars, we’d just like more power, and a bolt-on supercharger is the way to go in many cases.

ProCharger is one of the leading centrifugal supercharger manufacturers in the game, and they own the drag-racing market when it comes to superchargers. So you know their blowers are top-quality. But the company cut its teeth decades ago in the early Mustang market, offering bolt-on supercharger kits as far back as the ’90s. We hadn’t visited a supercharger bolt on in quite some time with a vintage Mustang, so we made the trek to ProCharger’s Kansas City digs to check out what was involved in installing one of their latest bolt-on kits to a restored 19641/2 Mustang convertible.

The new kit we installed (PN 1FX400-P1SC) fits classic Mustangs, Mavericks, Comets, and Cougars with 302/351W engines. It uses a P1SC-1 ProCharger supercharger, a highly efficient, self-contained (no external oil lines needed) supercharger with a custom-designed 7075 billet aluminum impeller, CNC-machined transmission case, and a compound bearing design to deliver maximum performance, with rigid aluminum brackets, an eight-rib serpentine drive belt with a spring-loaded belt tensioner, and one of ProCharger’s Bullet valves. The induction system was kept simple by using a carburetor with a pressurized blower hat, making this a blow-through application. Many superchargers are used with EFI setups, but the bang-for-the-buck champion in the street market is a blow-through carb system. So that’s what we used on this classic Mustang. The carburetor itself is a dedicated setup from The Carb Shop designed for a blow-through application. You can start with a stock Holley carburetor, but it needs some minor modifications for use in a blow-through application, since a carb was never designed to be pressurized.

The car used in this installation is owned by ProCharger’s own Controller Stacey Tonovitz, who has worked at ProCharger for nearly 20 years but had never had a blower on a car. Her car was recently fully restored, and she kept all the parts that were removed in case she ever wanted to take the car back to 100-percnet stock—an advantage of the kit installed here. There is no cutting or any modifications necessary that can’t be undone if you want to make the car stock again.

This kit fits Mustangs, Mavericks, Comets, and Cougars featuring the 302/351w engines, and bolted on in less than a day. The MSRP is $3,699. Stacey’s car has a very mild, restored 289 with stock internals, so the boost level was kept low at around 5 or 6 psi, but you can always add an intercooler to the package to allow increased boost. The P1SC-1 head unit can generate up to 925hp in the proper application, so there is a whole lot o’ growing room if she ever wants to really step it up.

2. The kit includes everything necessary to supercharge an early Mustang, though the Carb Shop carburetor is a necessary extra cost option.

3. The stock Autolite carburetor will not work properly in a blow-through supercharged application, so it was removed and put on a shelf for safe keeping.

4. A Holley 750cfm carb modified by The Carb Shop replaces the Autolite setup, and the pump is a high-output Holley mechanical pump. So this kit doesn’t require an expensive and complicated electric fuel system—super simple.

5. Because the car is a 1964.5, we replaced the generator for a modern one-wire alternator.

6. The kit includes this replacement crank pulley to convert the front dress to a single serpentine belt.

7. The power-steering pump was removed to replace the V-belt pulley for an eight-rib pulley for the serpentine belt. The belt setup retains the stock water-pump rotation.

8. The bracket for the one-wire alternator is this beefy polished aluminum beauty.

9. A supercharger builds more heat than stock, so they replaced the mechanical clutch fan with a modern electric fan. However, unlike positive displacement blowers that mount on top of the engine where the air is hottest, ProCharger’s centrifugal blowers mount off to the side to take advantage of cooler inlet air temperatures.

10. A billet inline fuel filter was installed between the mechanical pump and carburetor .

11. This sturdy polished aluminum bracket is what mounts the supercharger head unit.

12. Dropping the supercharger into place.

13. A carburetor is fine in a blow-through application with some modifications to handle the positive pressure of boost. The Carb Shop is one place to get a ready-to-run blow-through carb setup.

14. This carb hat screws to the top of the car like an air cleaner, and directs the boost pressure into the carburetor. A rubber seal must be used to ensure no boost pressure is lost from leakage.

15. This billet aluminum Bullet valve goes between the supercharger outlet and the carb inlet to vent excess boost pressure, especially when the throttle is snapped shut. The faster the blower spins and the more restriction to flow, the higher the boost pressure. When you lift off the throttle quickly, the blower is still spinning and making boost, and that pressure has to go somewhere. Hence, the relief valve.

17. All of the parts removed from this car were saved and can easily be reinstalled if the desire to return the car to stock ever arises.

Stacey Tonovitz is the Controller for ATI ProCharger. She has worked for the company for nearly 20 years but never owned a vehicle with one of her company’s superchargers. So when Mustang Monthly called looking for an early Mustang to use as an installation mule for ProCharger’s new kit, the obvious choice was Stacey’s recently restored 19641/2 Mustang convertible. Here’s what Stacey said about her car:

“My first car in high school was a red 1965 Mustang coupe that my dad and I spent time together fixing up. I loved that car, but opted to sell it when I was in college for a Plymouth Laser—not one of my finer decisions. I have regretted selling that car ever since and have always been on the lookout for another, but this time I wanted either a 1964.5 or a 1965, and it had to be a convertible (something my dad would not allow when I was in high school). Almost two years ago, I saw an ad for this all original 289 D-code 1964.5 convertible that had been in a barn for quite some time. My husband and dad have previously restored a 1971 Corvette and a 1964 Dodge Polara, and they were both game for this 1964.5 Mustang as the next project. A full ground-up restoration ensued with all but the engine machining and the paint being done by my husband and my dad. The end goal for this restoration was to have deep original Mustang bones but with some modern safety enhancements and some non-stock fun. For safety we added full disc brakes and shoulder harnesses all around. For fun I added the chrome wheels, and of course, the ProCharger. As a long-time employee of ProCharger I am excited to be able to show off this P-1SC-1 under the hood. That is, if you can catch me!”