Easy Bolt-On Fuel Injection from Holley on a 1967 Mustang 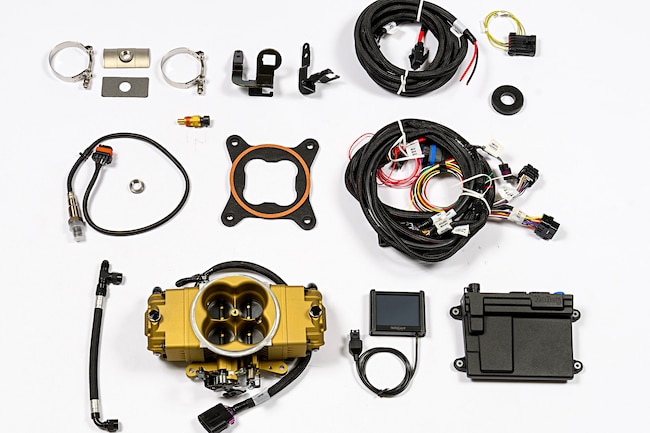 Don’t get us wrong. The keep-it-simple-stupid approach of a slapping a carburetor atop your engine is often the easiest way to get your street machine rumbling down the road. Sure, modern carburetors certainly work better than their crude predecessors, but the best route to maximum performance and efficiency remains an electronic fuel-injection system.

Some of our readers are already screaming at these pages: “But EFI systems are sooo complicated!” Well, they used to be. Over the past few years, aftermarket fuel-injection pioneers have developed systems that greatly simplify carb-to-EFI conversions. Honest! One such offering is the Terminator Stealth EFI system from Holley Performance. Holley’s Terminator Stealth EFI system finally puts the “easy” in EFI.

What’s more, for those infatuated with the classic Holley Double Pumper look—or maybe still having trouble letting go of their carburetor security blanket—the Terminator Stealth throttle-body is cleverly disguised as a carburetor. Because the 950-cfm throttle-body is a direct carb replacement, the throttle linkage, transmission cable, vacuum fittings, and air cleaner all hook up just like before.

Lastly, tuning some EFI systems seemed to require a computer-science degree just to get the damn engine running half as well as it did with a carburetor. Not so with the Holley Terminator Stealth EFI system’s smart self-tuning technology. In fact, answering a few questions with the “Calibration Wizard,” which can be accessed via the included 3 1/2-inch touchscreen controller), all that’s required is for you to start driving your car again.

To see if Holley’s self-tuning Terminator Stealth EFI system lived up to the hype, we installed one along with Holley’s Sniper EFI conversion fuel tank on a 1967 Mustang G.T. 350 clone. To see how we did it, check out the photos and captions.

If you’ve been clutching to your carburetor for simplicity’s sake, you’re running out of excuses.

1. For our installation, we chose Holley’s base Terminator Stealth EFI system, which includes a throttle-body, Terminator ECU, 3 1/2-inch touchscreen controller, and all the necessary wiring harnesses and brackets. There’s even a nifty clamp-on oxygen sensor bung that eliminates the need for a traditional welded bung.

3. We wanted to retain the classic carburetor look and simplicity in our 1967 Shelby G.T. 350 clone’s engine compartment. Holley’s Terminator Stealth EFI system was the minimally invasive way to get better performance and economy from this 302 Ford backed by an automatic overdrive transmission.

4. We began by replacing the tried-and-true 670-cfm Holley Street Avenger carburetor with the 950-cfm Terminator Stealth throttle body. (Unlike carburetors, fuel-injected engines can run much larger throttle-bodies because maintaining air velocity through the throttle-body is unimportant.)

5. Not only did the Terminator Stealth throttle-body look like a carburetor, everything including the AOD’s transmission kick-down linkage hooked right up without any adjustments. Slick!

6. We installed the supplied coolant temperature sensor in a coolant passage in the intake manifold.

7. With the throttle-body and sensor installed, we started routing the EFI’s electrical harness.

8. In keeping with the stealth theme, we attached the Terminator ECU to the inner fender panel behind the windshield washer bag.

10. The rpm signal is crucial to EFI system performance, so Holley requires the rpm signal wire be routed away from “noisy” sources, such as power, coil, and sparkplug wires.

11. We connected the signal wire to the tachometer output terminal of the car’s existing MSD 6AL ignition box.

12. Using crimpers and heat shrink, we terminated the rest of the power and ground wires, according to the detailed instructions.

14. With the electrical work complete, we moved on to the fuel system. Holley’s Sniper EFI Conversion fuel tanks make swapping an EFI system in a classic vehicle simple and straightforward. Their kit for 1965-1968 Mustangs features a galvanized and powdercoated fuel tank, which contains a baffled, 4.3-liter internal fuel tray to prevent fuel starvation. The kit includes a 255lph fuel pump and fuel level sender assemblies.

15. First, we drained the fuel from the old fuel tank. Fortunately, the tank had a drain plug—that actually came loose!

16. With the fuel line and sender disconnected, we removed the old fuel tank.

17. The kit includes an adjustable fuel level sender that installs through the top of the tank.

18. After assembling the fuel pump module, we installed it into the tank using the supplied gaskets and hardware.

20. We replaced the carburetor’s mechanical fuel pump with a fuel pump block-off plate.

21. The EFI pump’s fuel and return lines were on top of the tank, not at the front like the OEM carbureted tank, we drilled two 3/4-inch holes in the trunk floor to accommodate the fuel hoses. (A step drill makes this job a breeze.)

22. We installed a Holley 10-micron EFI fuel filter under the trunk near the front of the tank and used Earl’s fittings and Vapor Guard EFI hose. We used the OEM hard supply line as the feed and Earl’s Vapor Guard hose for the return.

24. We connected the supplied fuel line assembly to the Terminator Stealth throttle-body.

25. We mounted a Holley EFI pressure regulator (factory set to the recommended 43psi) to the firewall and connected the feed, output, and return lines using Earl’s fittings and Vapor Guard hose.

26. Being careful to avoid exhaust and suspension components, we secured the return hose and fuel pump power wire to the OEM hard fuel line using cable ties every few inches.

27. All done! The only visual carburetor deviations are a few extra hoses and the main wiring harness routed along the driver’s side shock tower.

28. Before starting the engine, we used the Terminator ECU’s 3 1/2-inch touchscreen controller to answer a few simple questions about our engine, including camshaft type. After using the supplied wizards to set up and calibrate the throttle-position sensor, we were ready to fire the engine.

29. After priming the fuel system and checking for leaks, we started the engine. To our satisfaction, the motor fired immediately and settled into a steady 900rpm idle. The 3 1/2-inch touchscreen controller relays all the vital information from the sensors to keep us informed.

30. We were extremely impressed how well the Terminator Stealth EFI system learned what our engine needed. We started and drove our Mustang without making any adjustments to the EFI system. No joke! Throttle response was lightning-quick, and the engine ran more smoothly than with the carburetor. Hey, if some knuckle draggers like us were able to install the Holley Terminator Stealth EFI system and Sniper EFI conversion fuel tank in our Mustang, we’re confident anybody can do this. Want EFI? You’re officially out of excuses.