ProCharger Power! - Just when you thought Ford’s S550 GT350 couldn’t get any better, ProCharger steps up with 205.54 more horsepower and 127 lb-ft of torque 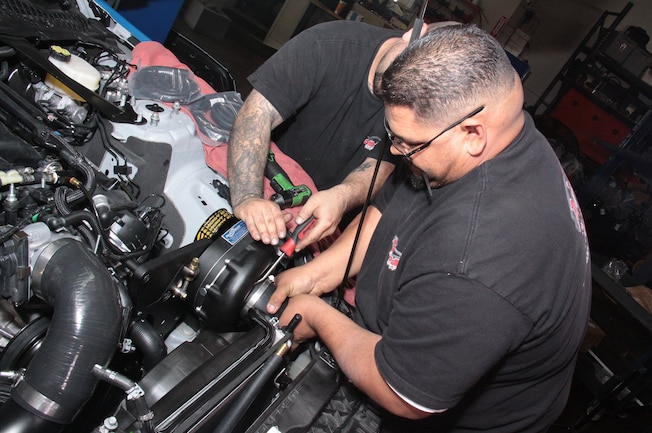 It is no less than remarkable what you get for your money in the 2015-2017 Shelby GT350. For approximately $55,000 to $60,000 for the street GT350 (depending upon dealer mark-up), you get 526 horsepower and 429 lb-ft of torque from an exotic flat-plane crank Coyote-based Voodoo 5.2L DOHC V-8, six-speed transmission, and a race-bred chassis to die for. With all of this in mind when you drive off the Ford showroom floor what else is there to want for in the GT350?

Yeah, we said it. The GT350 makes an advertised 526/429 hp/lb-ft of torque in factory trim, but there’s so much more tucked inside waiting to be used and we want it bad. The GT350 is an all-new Mustang driving experience especially if you’ve never driven one. And take our advice; drive the street GT350 before driving the GT350R race version. Once you’ve driven the R-model, the street trip will feel a bit tamer. But then again, let’s look at the street version. This is the most exotic Mustang Ford has ever built; the GT350’s high-revving flat-plane crank Voodoo 5.2L DOHC V-8 is the highest revving powerplant in Ford history at over 8,000 rpm.

We’re at Addiction Motorsports in the heart of Southern California’s San Fernando Valley, where Eddie Rios and his staff understand what it takes to get even more power from Ford’s S550 Mustang GT and GT350. We’re working with a box stock 2016 GT350 in showroom trim. Before Eddie put the GT350 on his dyno, it was given a good shakedown and break-in. On the rollers, the GT350 generated 459.04 horsepower at 7,190 rpm along with 363.29 lb-ft of torque at 4,830 rpm without a tune.

Eddie understands the great potential of Ford’s GT350. He also understands his job is to realize that potential any way he can get it. Eddie looked to ProCharger for inspiration for a GT350 he had in house for performance improvements. ProCharger stepped up with its own P-1SC-1 Stage II intercooled supercharger system.

Both the HO and Stage II ProCharger systems give Mustang enthusiasts plenty of options in both performance and appearance arenas, with a choice of polished, satin, or black finish for both the brackets and supercharger, as well as multiple intercooler sizes to best fit the power expected by the customer.

More remarkable yet is how easy the ProCharger P-1SC-1 is to install. With a suggested installation time of around five hours, an enthusiast can install this system in the home garage with common hand tools in an afternoon, though we’re pretty sure most of us will take a day to install it. And for the collector/leased enthusiast, both systems are 100-percent removable without fabrication or cutting. How good is that?

We should also mention that ProCharger offers a complete supercharger system like ours, which includes the ECM programming, fuel component, and a dedicated SFI approved balancer, or you can also opt for the tuner system, which is designed for those who are building their own fuel system and tune. Let’s get started.

1. We’re working with a new Shelby GT350 with the exotic Voodoo 5.2L Ti-VCT engine. What makes the Voodoo exotic is its flat-plane crank, hotter heads and cams, and sprayed cylinder walls in a lightweight block. For some, 526 horsepower and 429 lb-ft of torque just isn’t enough. We’re going to up the ante with a ProCharger intercooled system.

2. ProCharger is the first centrifugal supercharger manufacturer to design and release a supercharger system for 2015-2017 Mustang GT and GT350. With the ProCharger P-1SC-1 systems and tuner kits along with the highly effective air-to-air intercooling, you can expect OEM-style fit and finish, ease of installation, and reliable performance.

3. Front wheels need to be removed for access to fascia removal and air cleaner installation. Factory induction system is removed next.

4. Front aeroshield, which is exclusive to the GT350, is removed next.

5. Next, the fascia is removed. Although this looks complex, it is easy to accomplish.

6. Air ducting into the radiator and induction system is next and removed to make way for the intercooler. Never dispose of anything. If you want to return to factory original condition, then keep in mind that many of these parts are produced in limited numbers and may not be available in the future.

8. The GT350’s 87mm throttle-body stays put and is the right-size for our ProCharger installation.

10. Thermostat housing is replaced with a 90-degree neck provided by ProCharger to clear the supercharger.

12. The Procharger P-1SC-1 is supported by a bracket system that begins here at the GT350’s alternator.

13. The ProCharger P-1SC-1 billet bracket bolts to the Coyote/Voodoo cylinder head as shown.

14. With the brackets in place, the P-1SC-1 bolts right onto the billet bracket. Since the P-1SC-1 is self-contained, which means self-lubricating with its own oil, you will need to change the oil periodically.

15. As noted earlier, the ProCharger tri-belt system includes the air conditioning, alternator/water pump, and the head unit. Also, the ProCharger belt is an eight-rib setup, where as the stock system features a six-rib serpentine belt.

16. Assembly of the intercooler begins with this optional red adjustable boost valve, which vents excessive boost.

17. Intercooler has been installed and is ready for hoses.

18. This is the ProCharger outlet from the supercharger to the intercooler; basically, boost enters the intercooler and is cooled here, helping to deliver denser air and ultimately creating more power.

20. This vacuum line to the charge motion control valves, needs to be connected at the crankcase ventilation hoses.

21. We like this coolant recovery/holding tank from ProCharger. It’s designed exclusively for this system and will easily last the life of the vehicle.

22. Air cleaner and crankcase ventilation system are located here behind the fascia on the left hand (driver’s) side behind the oil cooler.

23. Fascia is reinstalled as shown here. It takes two people to remove and install the fascia if you’re going to do it safely; you don’t want to drop the fascia.

24. Prior to the initial engine start, the cooling system is pressure tested to 16 psi. It should hold indefinitely, otherwise, any leakdown indicates a problem with the system and that will need to be addressed.

25. There you have it, a complete ProCharger P-1SC-1 installation on a new GT350 and we’re ready for the rollers.

26. Eddie Rios connected the ProCharger supplied nGauge and dials the GT350 in for engine start and dyno testing. This is an easy way of uploading the ProCharger tune and will also get you on the road immediately.