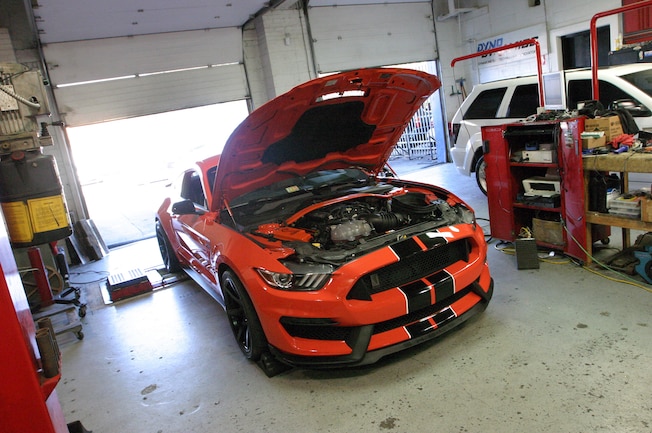 We are sure someone out there knows what year the first cold air intake was offered to the Mustang market. We don’t, but even in the Fox era, cold air intakes were nothing new. Way back in the 1960s, racers found a way to funnel outside air right into the carburetors with legendary cars like the Ford Thunderbolt. Back then a cold air intake meant popping out the inboard headlights and running air ducts directly to an air cleaner assembly mounted to the carbs.

Fast-forward to the Fox era. From the factory, many carbureted Mustangs featured some sort of cold air ducting straight to the air cleaner. It seemed that Ford had learned from previous air intake designs on how to get cool outside air into the carburetor. Once fuel injection hit the Mustang full-time in 1986, hot rodding was supposedly dead. They couldn’t have been more wrong.

Even though Ford stifled incoming air with what was called an air silencer, that was the first thing we checked for when looking to buy a Fox Mustang. You could find it by sticking your left hand in between the headlight and radiator support. You would either find the air silencer, or if someone had already removed it, you could touch the panel filter located in the stock air box against the passenger-side inner fender apron.

The first mods we did to a Fox Mustang was to remove the air silencer, install a performance air filter, pump up the timing to about 15-16 degrees, make sure the throttle-body was opening all the way, and let her eat. That was our version of a cold air and tune. These days a cold air and a tune is exactly that. One company that has these aspects covered is JLT Performance. JLT’s Jay and Lisa Tucker (their initials are where JLT comes from) have been at the cold air intake game since Jay began making his own intakes for his own Mustangs, starting with his 1999 Saleen and then a 2003 Cobra he purchased new. Jay was frustrated with what was on the market at that time, so using his body shop skills he started making his own with great results. Soon thereafter the word was out and JLT Performance was born.

That trend continues today because Jay has not stopped perfecting his intakes. With every new Mustang comes a new JLT cold air intake. Case in point, the latest and greatest Mustang, the 2015-2017 Shelby GT350, is the most recent Ford product to be launched. Jay purchased his own GT350 to really amp up the research and development on this intake. The below captions outline the success of that R&D.

1. Here is the JLT Performance 2015-2017 Shelby GT350 cold air intake. JLT’s intake consists of an intake tube with a built-in MAF provision, a Roto-molded heat shield, an S&B air filter, and the proper silicone reducer and clamps. JLT’s Shelby GT350 cold air intake starts at $349 for a black textured example without a custom tune. Obviously you will need a custom tune, but JLT has a cold air intake/SCT X4 tuner package for $749. The SCT X4 comes with a custom tune loaded into it, and this package makes for a plug-and-play install. Just add $50 to each package for a painted-to-match intake tube, while Hydrocarbon and custom Hydrographic intakes are priced at $424 for just the intake and $824 for the intake/SCT X4 tuner package.

2. Of course, the stock air intake is what we are replacing with the JLT cold air intake. The stock intake isn’t truly developed for all-out performance. Ford still has to maintain NVH standards, as well as keep build costs somewhat low. The paper filter does little for performance, and frankly, the factory pieces aren’t even close to being as aesthetically pleasing as JLT’s cold air intake.

3. First things first: JLT’s Jay Tucker has to remove the factory air intake. Loosen the clamp at the throttle-body, and disconnect the two PCV lines. A bolt must be removed before the stock intake can be taken out. You must also disconnect the mass air sensor from the factory air intake before getting it out of the way too. Literally this part of the install will take you 5-10 minutes. JLT also supplies instructions for a hassle-free installation.

4. This plug needs to be relocated from the factory air box to the inner apron. The JLT air box has a locating pin on the underside, and it is designed to fit into this plug on the apron.

6. With everything ready for mounting the JLT air box, finagle the box into place, making sure to have the air duct pointing into the back of the grille opening, as seen here. Then use the factory bolt to attach the JLT air box.

7. Remove the mass air sensor, and transfer it to the JLT cold air intake tube. A T-20 Torx driver needs to be used in order to remove the sensor from the factory tube, but JLT supplies new screws and a gasket to install it on the new JLT intake tube.

9. Tucker installs the JLT cold air intake into place, tightening the clamp onto the throttle body.

12. One of the last pieces of the puzzle is JLT’s foam heat shield insert. This insert is designed to keep engine heat from getting into the cold air intake where it could causing drivability issues and hamper all-out performance.

13. The testing, along with all of JLT Performance’s dyno testing and tuning, took place at DTP Racing in Chesapeake, Virginia, just a few miles from JLT’s headquarters. DTP is where Tucker tests all of his cold air intake and tune packages before readying them for production.

14. On DTP Racing’s Dyno Dynamics rear wheel dyno the GT350’s baseline numbers came in at 455 rwhp. During testing, JLT’s cold air intake was good for as much as 485 rwhp, a 30hp improvement. On the day of our test the intake was king for making 481.