700hp Can Be Yours by Building a Boss-Style Stroker 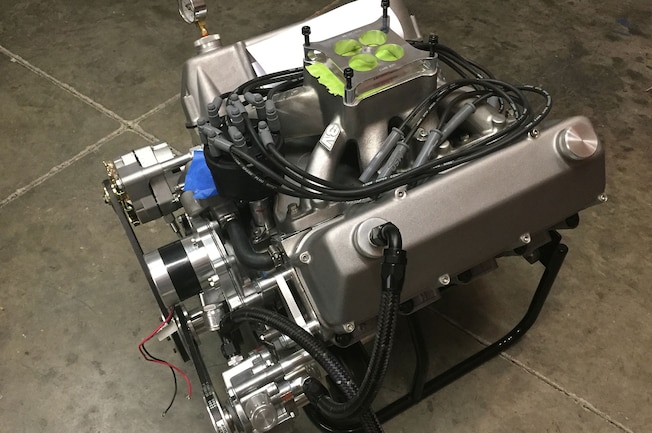 Everyone loves to play the horsepower game. How many times have you been at a car show, cruise-in, cars and coffee, or the racetrack and had someone ask those famous questions: How much hp does it have? How fast will it go? How big is the engine? And so on and so forth. Of course, as enthusiasts we never get tired of answering said questions, but if you want big numbers and a solid engine that will perform, you have to pay to play.

Let’s be honest now, as great as the small-block Ford platform is, just bolting on out-of-the-box heads, a cam, and an intake isn’t going to get you those big numbers. Sure, it’ll be a nice 280hp street engine. You might even crack 300hp. Upgrading the swinging bits to a small stroker kit and using better cylinder heads and camshaft will usually get you into low to mid 400s. But if you want to swing for the fences, you need to go big or go home. Open up that wallet and have a custom engine built by a reputable and known Ford engine builder. We know this type of build isn’t in everyone’s budget, but it is certainly awesome to see what a small-block Ford is capable of with higher-end components in the hands of an engine builder who can make those parts talk sweet nothings to each other.

Case in point is this wild Clevor build being screwed together by Brent Lykins at Lykins Motorsports in Kentucky for customer Scott Hodge and his 1970 Mustang Mach 1. Scott’s Mach is currently sporting a stroked 302, but he wanted more—more cubes, more power, and more fun. He came to Brent looking for something different. Well, a Clevor is certainly something different! A Clevor engine is so-named because it uses Cleveland-style canted valve heads on top of a Windsor block. This isn’t entirely new, as that is what Ford did to create the Boss 302 engine in 1969 (more or less, we won’t get into splitting hairs).

With today’s components, you can do so much more, though. Aluminum heads? Natch. But how about an aluminum block, as well? Throw in a huge bore with a stroker kit for 460ci, a solid roller cam, and a stout valvetrain, and you have the makings of a killer street engine. Can you say north of 700hp? No doubt, this package will put a grin on Scott’s face when he twists the key on his Mach 1. All of this hp will easily live on the street-swilling 93-octane gas from the nearest gas station. Something that simply wasn’t possible back in 1969, that’s for sure.

01. The reciprocating assembly starts with these beautiful slugs. These are custom diamond-forged pistons with a 22.5cc dish with skirt coating applied, featuring Total Seal rings in a .043/.043/3mm setup. They swing on Callies Compstar 6.250-inch rods and use coated Clevite rod bearings. Brent Lykins opens the wrist pin clearance up almost .002 inches on these to push more oil to the pins and to make a bit more power.

02. The block is a Dart aluminum piece that features a 9.500-inch deck height and 4.155-inch bores. This is an early mockup with the cam installed to verify clearances. Due to the stroke and parts used, some clearancing was required because the driver’s side connecting rods were making contact. Additional clearance was required on a spot on the pan rail and around the oil-pump mounting boss. This is pretty standard in stroker-kit building, which is why everything is mocked up before final assembly.

03. In the bottom of the Dart block sits a Scat Superlight forging with a 4.250-inch stroke that uses a 2.100-inch rod bearing journal. Clevite-coated main bearings are used here, too. Clearance is tighter than with an iron block. Aluminum blocks have a much different thermal expansion rate, which opens the bearing clearances too much once they become hot. This is a factor to keep in mind when building an all-aluminum engine like this.

04. The cam is from Comp and is based off of a 302/351 solid roller profile with a few special touches and instructions from Lykins. The specs may look a bit on the small side for a 460ci engine’s breathing capabilities. However, this cam is being paired with the Cleveland 1.73:1 rocker arms too for around .725-inch total lift. Brent specs a specific cam bearing journal size and installs cam bearings into aluminum blocks with green thread locking compound to prevent the bearing from moving when the block expands.

05. A billet double roller chain setup secures the cam to crank relationship. Note the camshaft roll pin length. Oftentimes, a cam will come with more than one pin length. It is critical to use the proper pin length for the cam timing gear being fitted. You want the pin to sit just below the surface of the gear, so as to not interfere with the retaining bolt and its washer. But it can’t be too short a pin so it doesn’t properly engage the gear, either.

06. Rotating the engine back over, Brent installs the new timing cover. He uses a special centering tool that fits over the crank snout to center the crank seal and space it properly around the crank snout. This ensures a leak-free fit, especially when using custom parts and doing things like line-boring a block, which moves the centerline of the crankshaft. The oil pump and Moroso pickup are installed at this time, as well.

07-08. Before the block is right side up again, Brent adds the Moroso oil pan and ATI Super Damper to the assembly. Rotating the block around again, we’re ready to start working on the top end parts. Brent lays a pair of Fel-Pro 1046 head gaskets on the block surface and slides the Crower link-bar roller lifters into place in the block’s valley.

09. For the valvetrain, Brent sourced Ferrea titanium valves. Their lighter weight (on average about 25 grams lighter than steel valves) helps keep everything on the cam lobe during the high lift of the solid roller at high rpm and will help the engine rev quicker, as well. The 2.190-inch intake valve weighs in at just 89.7 grams.

11. Keeping up with the titanium diet plan, Brent sourced Manley titanium retainers setup for the 10-degree locks. Manley spring cups were used in the aluminum CHI heads, too.

12. Manley also got the nod for valvesprings. They’re 267 pounds open at an installed height of 1.85 inches.

14. The CHI 3V 225cc heads were hand ported down inside the port to gain about 20cc of volume. This makes for a head that’ll flow 380cfm on the intake with great velocity to keep the fuel suspended in the air. Lawes Mayfield in Owensboro, Kentucky, does all of Lykins Motorsports’ port work, including the intake on this engine build.

15. Brent makes quick work of assembling the valvetrain once all measurements are finalized. It’s a bit cropped in this photo, but note the brass core plug in the lower left of the cylinder head (arrow). These coolant passages in the Cleveland head must be sealed off when they are installed on a Windsor block.

16. A lot of time can go into getting the valve tip pattern perfect. Brent spent the majority of an afternoon on this engine trying different styles of rockers and pushrod lengths to narrow the pattern. This can sometimes work by bumping the pattern towards the intake or towards the exhaust. A narrower pattern means you are losing less lift on the cam.

17. The Comp Cams Ultra Gold aluminum rockers Brent first tried rubbed the pushrods at full lift. Switching to Comp’s Ultra XD rocker arms solved the fitment problem. But even after Brent tried several different pushrod lengths, although his valve-tip pattern was perfectly acceptable, it wasn’t something he was completely happy with. Perfectionists!

18. A Lunati stud girdle wraps the valvetrain portion of the build. The girdle stabilizes the studs to each other and helps reduce harmonics while improving high-rpm stability.

19. Brent buttoned up the engine with Blue Thunder aluminum valve covers and a CHI single-plane intake, while ignition duties will be handled by an MSD billet distributor. A Moroso electric water pump is installed here, too. The Blue Thunder covers feature screw-in accessory plugs at each corner, which allowed Brent to easily connect AN fittings for the vacuum-pump system.

20. Just before the 460ci Clevor made the trip to the dyno, Brent added a Trick Flow thermostat housing with 90-degree water neck and a V-belt pulley setup for the engine’s GZ Motorsports vacuum pump and vintage-style 1G alternator front dress.

Brent brought Scott’s Clevor to Dale Meers Racing Engines to bolt the engine up to their engine dyno for break in and tuning. Carb builder Scott Perkins of Bowling Green, Kentucky, met Brent onsite. In Perkins’ hands was a highly modified four-barrel based off a Quick Fuel BDQ-1050 carburetor. Once full of fluids with the timing set and the carb dialed in, the dyno truth-o-meter brought us the following results. To say Scott will have fun cruising around town with this combo is a gross understatement!

Scott Hodge’s 1970 Mustang Mach 1 was already a pretty bad-ass ride with a stroked 302, Wilwood disc brakes, staggered Cragar wheels, and more. But it’s about to get a whole lot badder—roughly 720hp badder—once he takes delivery of this all-aluminum bullet from Lykins Motorsports and gets it down on the mounts. Look out world!