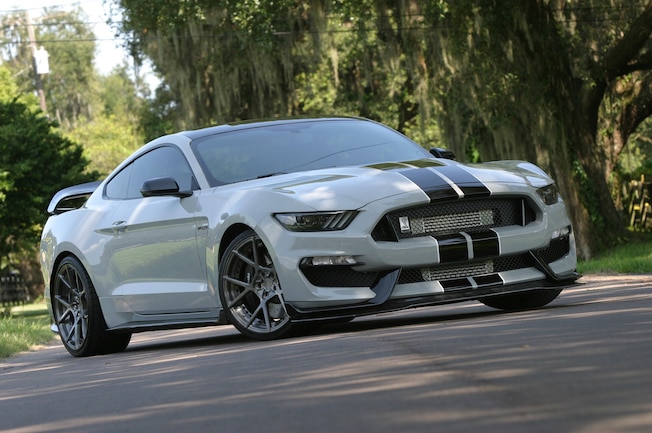 The hot Mustang right now is the current Shelby GT350 and GT350R. Introduced as a 2015 model, everyone by now knows about the car’s Voodoo flat-plane crank, 5.2-liter, 8,250 rpm, 526-horsepower monster under the hood. However, if a stock GT350 is great, just think how much better it would be with over 600 horsepower at the wheels!

Thankfully, the great minds at ProCharger wondered the same thing. Therefore, they set out to indeed see what a few pounds of boost would do for a stock GT350. ProCharger used Jeff Scofield’s 2016 GT350 as the engineering car, and it also sent one of the pre-production kits to Blow-By Racing for installation on a customer’s 2016 GT350R.

Jeff’s GT350 made a tick over 600-rwhp with just 4 1/2 pounds of boost using pump gas. Jeff’s GT350 used a P-1SC-1 supercharger, while Blow-By’s was a D-1SC unit. Blow-By’s GT350R made 650-rwhp on 5 ½ pounds of boost, and now both Jeff and Blow-By Racing’s Chris Jones have dedicated belt setups, and Chris has done some preliminary tuning using that system, and he’s at 711-rwhp on race gas. Chris is at that number at just 7,000 rpm, so that number is only going up from there.

The ProCharger GT350 and GT350R systems are available with either an entry-level P-1SC-1, all the way up to the race-bred F-1A-94 supercharger. The latter is capable of producing way north of 1,000 horsepower. Blow-By’s Chris Jones tells us his customer wants to be the first with a 1,000 horsepower GT350. With the F-1A-94, that just might come to fruition.

Thanks to the development work on Jeff’s GT350, Blow-By’s GT350R, and another GT350 ProCharger has at its disposal, the complete kits are now ready to ship to your door, or shop of choice. With the ProCharger GT350 supercharger system, bolting on over 150-rwhp is easy, and done without “cutting, drilling, bending, or any other modification,” according to ProCharger.

The GT350 system comes with ECM/PCM programming included, with zero permanent modifications to your Shelby GT350, or GT350R. The ProCharger system comes with DeatschWerks 95-lb/hr (1000cc) injectors, a fuel pump booster, and an air-to-air intercooler. The system is compatible with ProCharger’s P-1SC-1 supercharger, all the way up to the company’s F-1A-94 big boy, which is capable of supporting 1,200 horsepower with the proper hardware.

We have an install in the works with Eddie Rios at Addiction Motorsports with before and after dyno numbers, and with the supercharger paired with a complete Kooks exhaust system. So stay tuned right here as we make the impressive GT350 even better.

At Mustang Week 2016, attendees had a chance to see Blow-By’s GT350R and Jeff Scofield’s GT350 side by side. Both cars featured ProCharger systems even at that time.