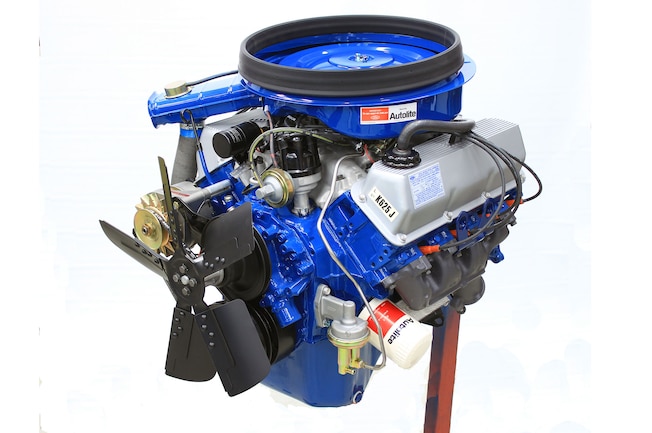 Compared to the legions of 1965 and 1966 Mustangs built, the Boss 351 is a low-volume, one-year wonder with a production of only 1,806. But as the last Boss of the trio, and a very strong performer, it retains a place of honor among Mustangers.

Steve Collins, MCA member and major Boss 351 enthusiast, invited the Mustang Monthly cameras to chronicle addition of his latest Boss 351 engine. The freshly detailed engine is soon to be installed in a loaded, black Boss 351 that’s coming down the homestretch of a meticulous restoration.

The highest evolution of the 351 Cleveland engine family, the Boss 351 got the full performance treatment from Ford engineering. This story shows not only how to detail a Boss 351 engine, but also goes a long way towards showing how to restore a 351 Cleveland engine. The two have much in common.

So whether you’re working on a Boss 351 or 351C, or you just love looking at a rare, minty engine, we’ve got a treat for you in these next few pages.

According to Kevin Marti’s The Mustang and Cougar Tag Book, this aluminum tag came on engines built from January 1964 through February 1973. Tags were also put on transmissions, axles, and steering boxes. The formats changed, but this one identifies the engine as a 351C, showing the code for when it was built, and the 625 number identifies it as a 351 Special, more commonly known as the Boss 351. These tags are frequently lost. This one is a licensed reproduction from Marti Autoworks.

So much is unique about these engines, including the breather stickers. Boss 351 breathers got only this “Specify Autolite” sticker, nothing else. It’s common to see the “351-4V” and “Use Premium Fuel” stickers on the breather lid, and while that’s correct for other 351 Cleveland engines, they’re not correct for a Boss 351.

The Boss 351 coil is the standard Autolite yellow top. The bracket is semi-gloss black, and the engine ID tag bolts to it with a black phosphate-plated bolt.

The Boss 351 dipstick looks like an ordinary dipstick, but it’s unique. Its part number is D!ZX-6750-B, and it’s calibrated differently for the Boss 351’s greater oil capacity. The handle is standard semi-gloss black.

The Duraspark electronic ignition was still two years away, so the Boss 351 got the common upgrade of its day, a dual-point distributor. It also got a dual-diaphragm advance canister that retards timing during deceleration when manifold vacuum is at its highest. The yellow-striped hose goes to the carburetor, the red hose goes to a brass port in the manifold just behind the coil. According to Collins, the distributor hold-down should be phosphate-plated (inset pic). The empty bolthole in the intake manifold is supposed to be empty.

The Boss 351 alternator had a large pulley to reduce rpm and prevent over-speed and premature wear. The brackets are semi-gloss black, the case is bare aluminum, and the pulley, fan, and mounting hardware are gold dichromate. This alternator is a 55-amp, which is standard for a Boss 351 and many others, and comes with a red color bar to designate it as a 55-amp. Different amp ratings had different color bars (see sidebar). If you look closely, there is a faint double stamp with a 1970 DOZF part number. Crazy, huh? These are the things that make a judge’s job tough.

To better survive high-rpm operation, the Boss 351 was balanced differently than the standard 351 C. The 351 H.O. (Boss) had a thicker, heavier harmonic balancer up front and a specifically balanced flywheel rear. Because air conditioning was not available, a two-groove pulley was used—one belt for the alternator, one for the power-steering pump, if it was ordered. Both the balancer and pulley are semi-gloss black, and the bolts are phosphate plated.

The Carter fuel pump is a simple as they come—no vacuum pump, no replaceable canister filter. The bottom mounting point is an open slot that fits over a stud. On the assembly line, the pump would slide over the stud, already in place, and fasten with a silver cadmium bolt up top. This made it easier to install and one less bolt to align.

This is a reproduction oil filter with the vintage Autolite logo. Later filters had the Motorcraft logo. Originals would have a seven-digit sequence at the lower left corner of the red rectangle that included a date code.

This heat shield, used only on the driver’s side, protects the motor mount from the exhaust manifold’s high heat. The smooth-looking exhaust manifolds should have a heatproof finish that resembles bare cast iron.

There’s no heat shield on the right side, but there is the shroud for the preheater tube. Its purpose was to draw intake air from the exhaust manifold (the first part of the engine to warm after startup) to speed warm up and prevent carburetor icing on cold mornings.

Like everything else that’s different on the Boss 351, the preheater shroud is different than a standard 351C. It’s much shorter, only covering the front cylinder’s exhaust port. Standard 351C shrouds extend all the way to the rear of the manifold. There’s a boss just forward of the port on cylinder #3 that would have been used to bolt the longer shroud to the manifold on a standard 351C.

Moving to the rear of the engine, the flywheel is also specific to the Boss 351. It’s balanced differently than a standard 351C flywheel and is not interchangeable, though both are cast iron. This is the engineering number for the Boss 351 flywheel, which must be used with the matching Boss 351 harmonic balancer.

Many Ford engines have the oil pressure sender up front, near the oil filter. On the Boss 351, it’s to the rear, just behind the intake manifold. This one, an unrestored original, is silver cad plated.

This fitting provides access to manifold vacuum. Two of the smaller taps are capped off with rubber caps, leaving the large end fitting that connected to the power brake booster (power front disc brakes were standard on the Boss 351), and one smaller tap. The smaller fitting connects to a temperature sensor in the breather. During a cold start, manifold vacuum is routed from this fitting to a heat-sensitive switch, then to the diaphragm atop the air cleaner’s snorkel via a hose with blue stripes and codes (in the same style as the distributor advance hoses) to draw warm air from around the exhaust manifold. Once the temperature rises above a certain threshold, the sensor closes off the vacuum supply, the diverter flap in the tip of the snorkel opens to its normal operating position, and the engine draws air normally through the end of the snorkel.

This hose connects the oil filler cap in the valve cover to the port on the rear of the carburetor as part of the PCV system. The system takes in clean air through a filter in the breather, draws it through the engine crankcase, then takes out crankcase gasses through this hose and routes them into a port on the rear of the carburetor where the gasses are burned. The bracket is painted engine blue, and the intake manifold bolts are phosphate plated.

In 1971, the oil filler caps (there’s another on the other valve cover) are both stamped “Autolite” and are semi-gloss black. The PCV valve is in the cap on the driver’s side of the engine. The hose is molded and stamped with the Autolite logo.

Installed, the Boss 351 engine is a thing of beauty. This is the highest form of the superb 351 Cleveland design, and one of Ford’s hottest muscle Mustangs. Is there anything better than a highly detailed Boss engine that runs as good as it looks?

Care to explore the Boss 351 story further? Start with the Boss 351 registry at http://www.boss351registry.com.

Also just hitting market is a new book from Boss 351 enthusiast Rick Ybarra, Jr. Boss 351, A Comprehensive Owners Guide and Story is 222 pages long and chock full of Boss 351 info that Ybarra spent most of his adult life acquiring. It’s self-published, so don’t expect high-end production value, but for the enthusiast and restorer, we know of no source with so much insider info in one place.