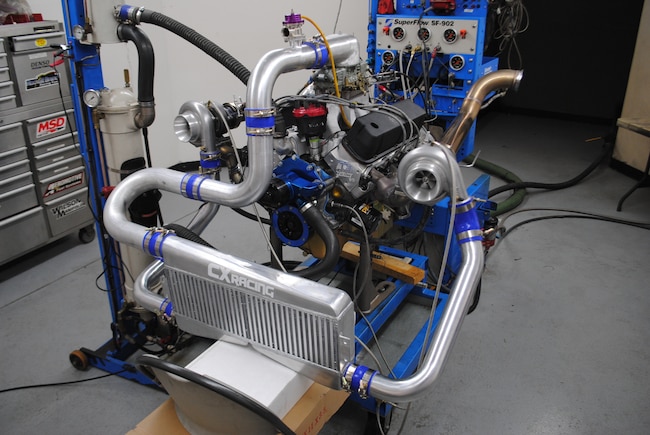 A few years ago, our sister magazine Muscle Mustangs & Fast Fords covered the buildup and dyno test of a 347ci small-block with off-the-shelf parts, street-oriented cam timing, and a carburetor, and the crowning touch was a CSX Racing twin-turbo setup. The results were less than expected due to a few factors, so in this story, we will fix those ailments and develop more power in a more controllable package. While this engine is on the wild side for most Mustang Monthly readers, some of our readers love hearing about turbo engines. This small-block is right at home between the shock towers of a street or strip Mustang. Let’s take a look at how to build and tune one of these beauties, so you can be the new hero at your next Mustang show. Oh, and also, blow the doors off of most any car you’ll come across on the street!

By going big on the displacement, cam timing, and head flow, we were able to produce a 347ci stroker with impressive power potential even before adding boost. The power output of any forced induction engine is the result of the boost pressure multiplied by the original output of the normally aspirated combination, so starting with more power before the boost means increased output under boost. Technically speaking, a normally aspirated engine already runs under boost (atmospheric pressure of 14.7:1), so doubling that pressure (adding 14.7 psi) will (sometimes) double the normally aspirated power output. If you start with a 300hp engine and apply 14.7psi of boost from a turbo (or two, in this case), you wind up with 600hp. If you apply the same boost to a 400hp engine, you get 800hp, 1,000hp if you start with a 500hp combination.

The math is easy, but getting the turbo engine to cooperate in the real world is sometimes a little more difficult. Despite the difficulties, it is always better to start with a more powerful normally aspirated combination when you go looking to make big power, which is exactly what we did with this 347. For those who didn’t catch the first installment of the PSIchotic Stroker, here is a brief reminder of what transpired. To maximize the normally aspirated power of the small-block Ford, we stepped up to an aftermarket block stuffed with forged internals that included a 4340 forged stroker crank and rods from Speedmaster combined with forged flat-top pistons from JE. Adding power to the short-block was a Crane hydraulic roller cam and AFR 205 Renegade heads. The Crane cam offered a .579/.595 lift split, a 236/244 duration split, and 114-degree lobe separation, while the AFR heads offered flow rates of 330cfm. Topping the 347 was a Parker Funnel Web fed by a Holley 950 Ultra HP carburetor. Other important mods included an MSD ignition, a Milodon oiling system with a windage tray, and Lucas synthetic oil. The normally aspirated 347 offered impressive power, even before adding boost by producing 519hp at 6,900rpm and 434lb-ft at 5,400rpm.

This PSIchotic stroker was originally built to test the merits of the then-new 5.0L twin-turbo kit from CXRacing. The kit included exhaust manifolds, turbos, intercooler, waste gates, stainless exhaust, aluminum intake tubing, and all the clamps and couplers to connect the system. Though the kit was complete enough, right down to the oil feed and drain fittings, the supplied GT35-style turbos featured T3 turbine housings designed to fit the T3 flanges on the exhaust manifolds. Though plenty powerful, the small T3 exhaust housings made boost control all but impossible on the engine dyno. No matter what waste gate spring combination we tried, we could not adequately control the rising boost curve. We even tried removing the waste gates entirely, but this simply reduced boost response lower into the rev range. The small T3 turbine housings were just too responsive (and restrictive) for our high-horsepower application. Back during our first test, we had to limit the engine speed of the test to 6,600rpm to keep the boost pressure down below 16psi. The combination of no waste gates and the rising boost curve produced a less than ideal result on our carbureted stoker.

The cure was to dial in the boost curve on the 347 with two very important changes. We knew we needed to change the small T3 turbine housings, but this change required replacing the T3 flange on the exhaust manifolds. Rather than redesign the manifolds, we simply made adapters to step up the T3 flange to the larger T4 flange. These adapters allowed the installation of larger T4-based, 76mm turbos from CXRacing capable of supporting higher than 700hp each, and we had more than enough turbo for the 347 stroker. The larger T4 exhaust housings were supplied with 1.15 AR turbine housings. We also replaced the supplied waste gates with 45mm Hypergates from Turbo Smart. The extra exhaust flow provided precise boost control, allowing us to dial in the desired boost pressure using a manual waste-gate controller. With control of the boost supplied by the twin-turbo system, we were free to dial in the jetting on the CSU blow-through carburetor. With our air/fuel and timing curves optimized for race fuel, we cranked up the boost to 17.4psi where the twin-turbo 347 cracked the magic 1,000hp barrier with peak numbers of 1,003hp and 891lb-ft of torque. Boost is worthless without control.

Equipped with the T3-based, GT35-style turbos, the 347 produced impressive peak numbers (919hp and 731lb-ft of torque), but check out the shape of the curve. The only way we could get any type of boost response was to eliminate the waste gates entirely, and even then, the boost rose rapidly higher in the rev range. After installation of the T3-T4 adapters, larger 76mm (T4) turbos, and Turbo Smart waste gates, we had complete control of the boost supplied by the turbos. That control allowed us to dial in the air/fuel and timing curves to safely exceed 1,000hp. Note: The new combination offered not just more peak power, but more power everywhere. On a turbo engine, boost control is everything!

The boost curves offered by the T3 and T4 turbos tell the whole story. Removing the waste gates from the T3 twin-turbo combination resulted in very little boost down low, but the boost rose uncontrollably at higher engine speeds, thanks to the restrictive T3 housings. After installation of the adapters, T4 turbos, and Turbo Smart waste gates, we had full control of the boost. The new components provided the ideal combination of boost response and peak power. The boost curve offered by the T3 combo started out at just 2.5psi, climbed slowly, then rose rapidly at the top of the rev range to 15.5psi before we shut down the party. By contrast, the T4 combo started with 14 psi, rose to a maximum of 18 psi, then fell off slightly to 17.4 psi at the power peak.

01. We were PSIched about controlling the boost on our twin-turbo, carbureted 347!

02. The 347 short-block featured forged flat-top pistons from JE. The 10.8:1 static compression was a touch high for turbo use, but it did improve the power output of the normally aspirated engine. While this can be a street engine, you need to use the best pump gas you can find, spend the bucks for high-octane race gas, or back the timing off a little when driving on the street.

03. The bottom end consisted of a 4340, forged crank, and 5.40-inch rods from Speedmaster. Milodon supplied the necessary main studs to allow for installation of the windage tray. It was necessary to bottom tap the main stud holes prior to installation.

04. Oil control is critical on a turbo engine, so we installed a complete Milodon oiling system that included this HV oil pump, windage tray, and pick up.

06. AFR supplied a set of their impressive 205 Renegade heads for this project. The heads were secured using 1/2-inch ARP head studs and Fel-Pro 1011-2 head gaskets. The AFR heads offered both impressive airflow (330cfm) and a thick deck to ensure sealing under boost.

07. In addition to the a 2.08/1.60 stainless steel valve package, the AFR Renegade heads featured a spring package that offered sufficient rate and coilbind clearance for our near .600 lift cam.

09. For turbo use, the Hooker headers were replaced by stainless turbo manifolds from CXRacing.

10. The smaller T3-based, GT35-style turbos limited boost control, so we fabricated these T3 to T4 adapters to allow installation of larger T4 turbos.

12. The twin -turbo kit featured an efficient air-to-air intercooler. Note the dual-in and single-out configuration of the end tanks. The kit also came with all the necessary aluminum (polished and beaded) tubing, couplers, and clamps, but we modified some of the tubing to fit our carbureted application.

14. Equipped with the adapters and 76mm turbos, the power output of the carbureted 347 jumped from 919hp and 731lb-ft of torque to 1,003hp and 891lb-ft of torque. The key to any successful turbo engine is boost control!