For 3 Years the 5.0L High Output Was Fitted With the Holley 4180C Carburetor 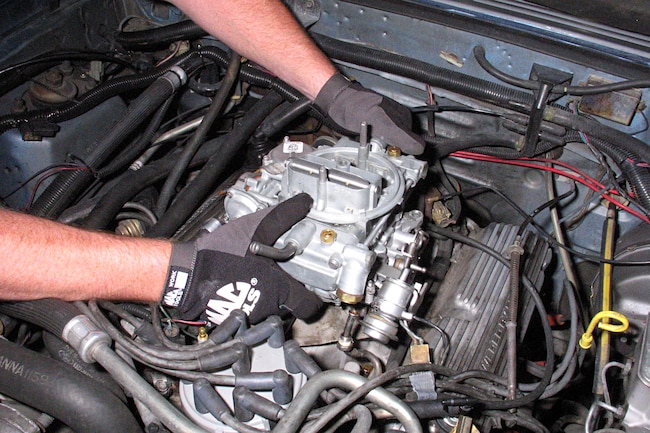 We have been engrossed in electronic fuel injection for more than 30 years, which makes it challenging to remember the humble two- and four-throat carburetor. Fox-body Mustangs were fitted with carbureted fuel systems from 1979 to 1985. When Ford gave the Mustang GT that first shot of adrenaline in 1983 with the first four-barrel carbureted pony in a decade, it looked to Holley for inspiration. Holley, as it had done many times in the past, stepped up with just the kind of carburetor Ford wanted.

The Holley 4180C four-barrel carburetor was originally factory installed on all 1983-1985 Mustangs equipped with the 5.0L High Output engine and manual transmission. Models with Automatic Overdrive got CFI (central fuel injection), which was fired by EEC-III or EEC-IV depending upon build date. The 5.0L-4V was GT only in 1983-1984, then also LX models for 1985.

Although the Holley 4180C resembled and performed like the more traditional Holley 4150/4160/1850 carburetors it was decidedly different than those high-performance atomizers. The 4180C was a Ford- and Holley-engineered carburetor manufactured by Holley for Ford production vehicles like the Mustang and even F-Series trucks.

When you pop the twin-snorkle air cleaner on one of these Fox classics, the 4180C’s looks can be quite deceiving because it looks like a traditional Holley. However, the 4180C employs a different main metering system and idle circuit. Ford and Holley designed this guy to be tamperproof, with sealed idle mixture screws along with annular discharge boosters over the primary throttle plates. The primary metering block has very little in common with those we find on the 4150/4160/1850 series carburetors. And if you’re thinking about swapping a Holley primary metering block into your 4180C, forget it. They do not interchange. The main body will not accommodate a typical Holley metering block.

If there’s any good news to be found, it’s that the 4180C’s secondary side will accommodate the 4160’s metering plate or 4150’s metering block with minor modifications. You can even use Holley cathedral or Le Mans–style fuel bowls on the 4180C depending upon your local smog laws. Before taking a leap into the deep end of the pool you must first decide whether any modifications make sense on your 4180C, especially if you live in an area with tough emissions testing laws. We are also of the belief that most smog shops wouldn’t know the difference between a box-stock 4180C and a modified piece on a visual unless your 5.0L Mustang fails the tailpipe sniffer test.

The 4180C accelerator pump package is virtually the same as the 4150/4160/1850 with complete interchangeability. When you carefully evaluate the 4180C carburetor, you find it is a reliable atomizer that delivers predictable performance because it enjoys the reliability of Ford’s extensive testing and engineering coupled with Holley’s expertise. This what makes the 4180C a factory performance carburetor you can trust as long as you can find a good core. That is why it is suggested you keep modifications to a minimum to both pass the toughest smog check while yielding the performance you desire.

2. The 4180C was surely a smog carburetor with evaporative emissions plumbing and a host of other low-emissions features. What the 4180C has going for it is reliable, predictable performance you can live with, especially if you’re driving a stocker. Durability comes from OEM-level engineering and testing.

3. From this side you can see the California emissions vacuum choke pull-off, which does not appear on 49-state 4180C carburetors. The choke pull-off opens the choke in less time to reduce cold emissions startup. This is an electric choke, which was conceived for the same reason: more reliable cold start, quick pull-off, and lower emissions.

4. With the 4180C removed we get a closer look at the carb spacer and EGR (exhaust gas recirculation) package. There is also a heat shield to keep excessive engine heat away from the fuel bowls.

5. It is a good idea to periodically remove the carb/EGR spacer and clean the passages. If you are having idle quality issues check the EGR valve, which can stick open due to excessive carbon deposits. Make sure the EGR is getting adequate vacuum for proper function. Function happens when you modulate the throttle.

6. This restored Holley 4180C built by Pony Carburetors has been out of business for many years as a result of its founder’s passing, the late great Jon Enyart. These folks did incredible carburetor restorations and tuning. Enyart was well known for his tuning clinics and exceptional restorations.

8. The annular discharge boosters in the primaries are one distinct difference between the traditional performance Holley 4150/4160/1850 carburetors and the 4180C.

9. Although the 4180C baseplate is similar to the traditional Holley, it is a completely different piece with sealed Allen-head idle mixture screws, which are normally in the primary metering block on a Holley.

11. Here’s a 49-state 4180C. It does not have the California-inspired choke vacuum pull-off. This 4180C core has been rebuilt, hence the electric choke cap screws and damaged screw heads. These electric chokes were originally tamperproof and had screws you could not remove.

12. A closer look at the California emissions vacuum choke pull-off and electric choke.

15. Here is the backside of the 4180C primary metering block with two-stage power valve.

17. The 4180C sports brass floats. You can swap in cathedral or Le Mans float bowls if you are considering canyon cutting or some form of competition.

21. Carburetor spacers do improve horsepower and torque. However, we suggest sticking with the factory EGR carb spacer, which is effective and will pass a smog check.